A comparison, to which Hassle readers can surely relate: if a movie is an album, then a great scene is the single, the killer track you play over and over again. Sadly, outside of elaborate video mixtapes and pixelated Youtube clips, film scenes are harder to revisit on their own. To this end, the Film Flam staff has taken today’s roundtable as an opportunity to isolate and reflect on the most unforgettable cinematic moments of the year. If we occasionally seem vague, it’s because these scenes are better enjoyed in person and unspoiled than vicariously through a listicle. After you finish this, put down your phone and get thee to a rental store. 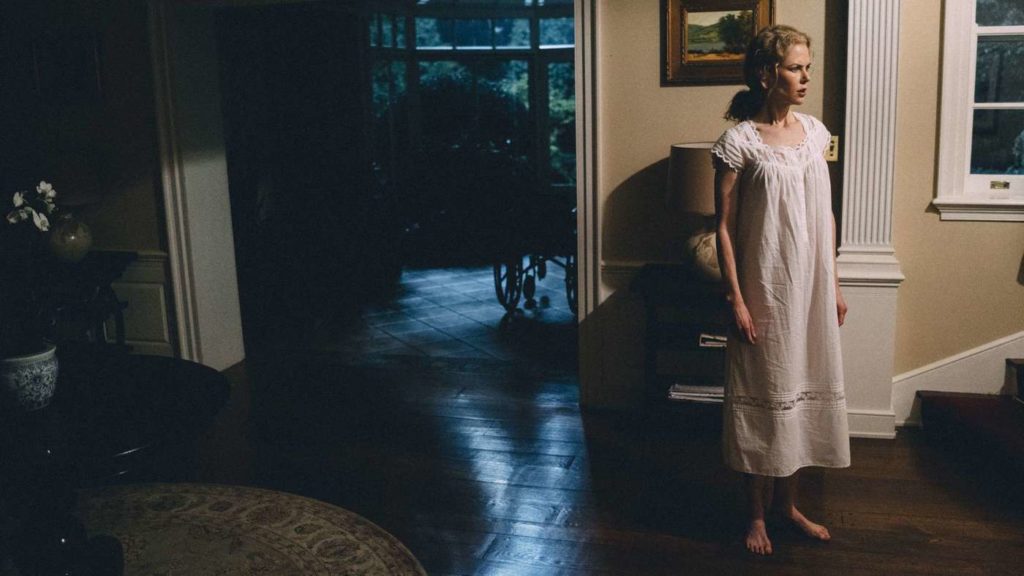 ANDERS CROFT
The Killing of a Sacred Deer is a film that’s rife with fascinating character moments meant to shock and amuse the viewer. I can’t help but giggle when I remember Colin Farrell explaining to his onscreen son how he may have accidentally given his father a handjob. But honestly if I had to pinpoint a moment that’s extraordinarily well executed, I’d point to the film’s climax in the living room. Between Farrell’s spinning around with the rifle and the ultimate shock of what comes next, I was absolutely blown away by how ballsy it all was (and by how many people booed the scene at Cannes).

KYLE BRUNET
The best scene of the year might also be the most controversial scene! The Florida Project is a bleak, and ultra-Harmony-Korine-esque, portrait of lower class America, which is why the ending is so out of left field, but damn does it work for me. After being bombed for almost two hours of pure bleakness and ultra realism, the ending shoves us into a dream world full of hope, wonder, and imagination. It doesn’t leave us with a pit in our stomach, but instead with a sense of positivity. “It’s going to get better, nothing is permanent” is the feeling this ending gives you, and in a world as shitty as ours, a positive and heartfelt ending to a depressing piece of art is best for us. I know it’s an unpopular opinion, but the final minute or two of The Florida Project makes it film of the year, which makes the ending, in turn, the best scene this year. 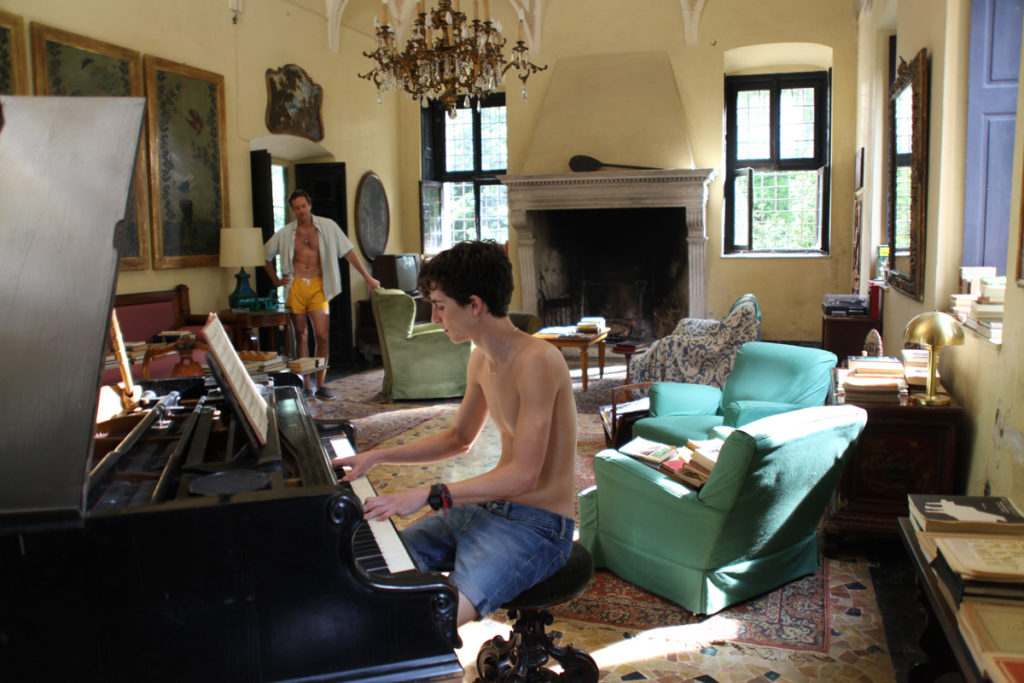 KYLE AMATO
The ending of Call Me by Your Name. This is the scene that will get Timothee Chalamet nominated for an Oscar, if not get him the win outright. I’m not going to spoil it here; it needs to be seen.

OSCAR GOFF
The cleverest thing about Baby Driver, Edgar Wright’s hyperkinetic car chase thriller, is that it’s not really about cars at all. Just as the NES classic Mike Tyson’s Punch Out! was a rhythm game disguised as a fighting game, Baby Driver uses its immaculately stages action scenes as an illustration of the power of music. Nearly every set piece is meticulously crafted as a love letter to the pop song that serves as its score, but nowhere is this more apparent than its dazzling opening credits. In substance, the scene is as simple as they come– Ansel Elgort’s Baby goes on a coffee run for the gang he drives for– but he uses it as the opportunity to stage an elaborate dance number set to Bob & Earl’s “Harlem Shuffle,” blaring in his earbuds. What makes this scene mesmerizing is that it’s not just Baby who gets lost in the music– every lyric, beat, and horn blast is illustrated by his surroundings, whether on a street sign, graffiti, or a conveniently placed music shop window. So seamless is Wright’s staging that it took me several lines to fully realize what was happening; upon my second viewing (just over a week later) I noticed at least half a dozen touches I missed the first time (and I’m positive I still haven’t caught everything). Though he has yet to make a “proper” musical, few working directors since Busby Berkeley have Wright’s gift for matching film for music. 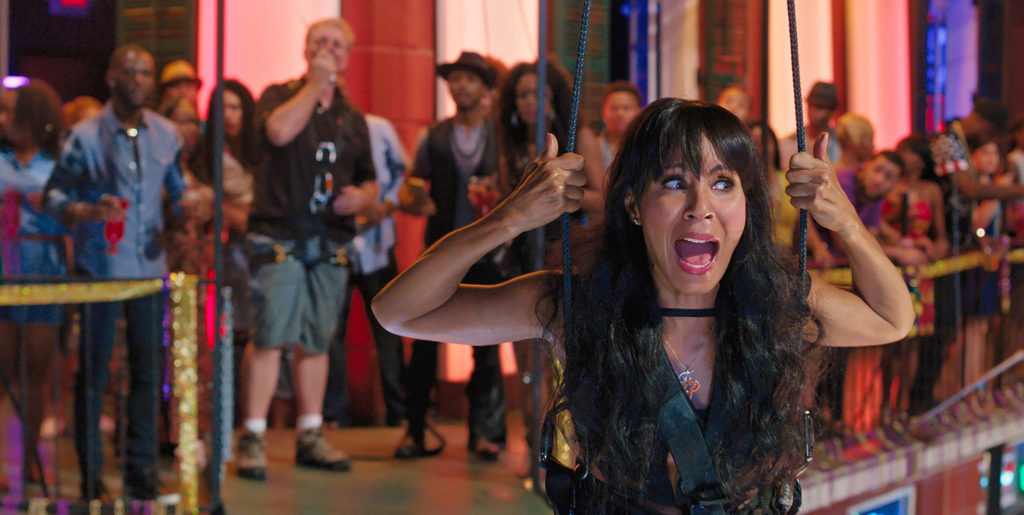 NICK PERRY
I was going to say the Wonder Woman “No Man’s Land” sequence, but it would be a lie (although it did leave me in awe). The true answer is the Girls Trip zip-line scene. This scene is historically funny, and it should be included in comedy classes for eternity. Without giving too much away, Jada Pinkett Smith and Tiffany Haddish peed their way into my heart this year. Give me a Girls Trip series, a la Hope and Crosby’s Road to… films.

W. LOGAN FREEMAN
The first time Chris falls into the Sunken Place in Get Out my jaw was on the floor. The most tense I felt in a theatre all year was when Kristen Stewart texted with a ghost — or maybe a stalker — in Personal Shopper. Conceptually, the scene in A Ghost Story where Rooney Mara eats a whole pie in one continuous, tragic take was my mind’s favorite. But the child in me has several spoiler-filled favorite scenes in Star Wars: The Last Jedi, which might take the cake. Undoubtedly, the runner up to this list is Dave Bautista’s scene in Blade Runner 2049. (I can’t choose just one!!!)

Tomorrow: The worst films of 2017! (If you missed it, check out yesterday’s roundtable here).

Tags: A Ghost Story, Baby Driver, Blade Runner 2049, Call Me by Your Name, get out, Girls Trip, Personal Shopper, Star Wars: The Last Jedi, The Florida Project, the killing of a sacred deer