The Killing of a Sacred Deer (2017) is a perfect follow-up to The Lobster (2015) in that it effectively divides the most true-hearted fans of Yorgos Lanthimos from those who were merely impressed with the surface-level comedy of Colin Farrell playing a beta male. In making this claim, I wholeheartedly believe that this film is a masterful way of tying the ‘so messed up but good’ quality of Dogtooth (2009) with the more accessible qualities of The Lobster to present a film that is divisive to the mass populace but integral to true cinephiles.

What Lanthimos brings to the table this time is a truly iconic mix of his distinct absurdist comedy tied with masterfully chilling execution. From the film’s opening shot of an open heart surgery exposed in raw detail, to moments of Colin Farrell explaining his experiences with ejaculate to his son, it’s a film that perfectly appeals to Lanthimos’ niche audience of film critics who like to have fun. 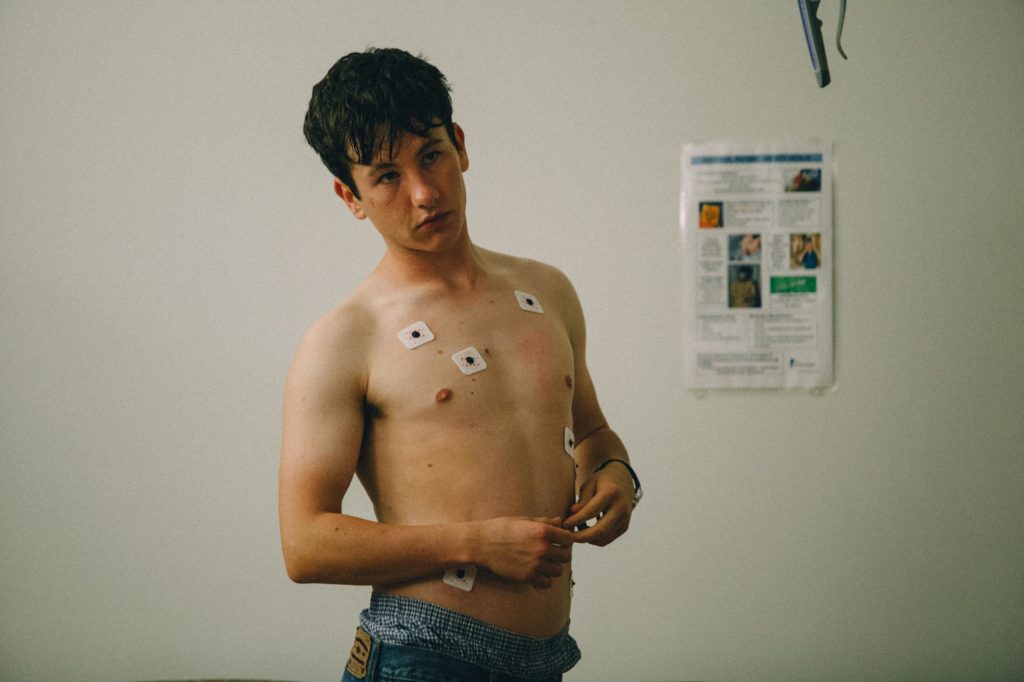 Perhaps the most impressive qualities, however, are the ones which speak to the breadth of experience Lanthimos puts on display, from long shots reminiscent of Kubrick’s The Shining as the camera slowly draws on a single character’s painful experience, to wide shots exploring bizarre features splotched against a suburban backdrop in ways that make viewers progressively uncomfortable. The sound mix also demonstrates a unique approach to the horror genre Deer touts as its backbone, as staccatoed tones replace otherwise graphic sound effects as, for example, one character bites into their own arm to tear off a chunk of flesh. The company surrounding me jumped at what would otherwise be familiar to the more gore-friendly contributions to horror.

But that’s the sort of uniqueness Yorgos continues to bring to his body of work. 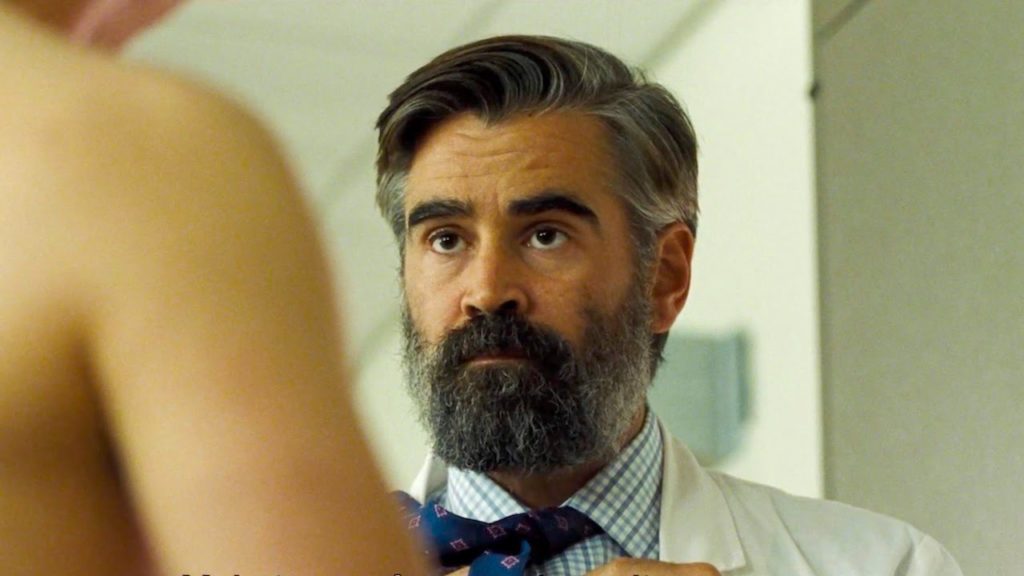 By now you’re probably wondering what exactly this film is about. With a title like The Killing of a Sacred Deer, you’d think it would assume a literal meaning, much like that of The Lobster and Dogtooth, perhaps following the story of a cold-hearted hunter in search of some mystical beast.

Fortunately, the story is more grounded and twisted than that fantasy could offer.

Colin Farrell plays a surgeon leading a double life. At home, he is the beta male we need him to be – the sort of weirdo we remember distinctly from his performance in The Lobster, only this time accompanied by a pair of children with whom he struggles to relate. Outside of this life, he’s the cool dude mentoring a fellow weirdo named Martin – the son of a patient he failed to save.

It’s with Martin that Farrell plays his cool-yet-weird persona off, talking about watches and body hair and french fries, all the kind of mellow shit you’d discuss with a weird family friend or something. This has the unfortunate effect of impressing Martin enough to try and make Farrell into a literal father figure by setting up a booty call for his lonely mother.

As Farrell tries to deny this kid of having a surrogate father, Martin reveals his twisted curse: he has the ability to sicken Farrell’s children. In addition, he provides a chilling ultimatum. In order to save his family, Farrell must kill a member of his family. 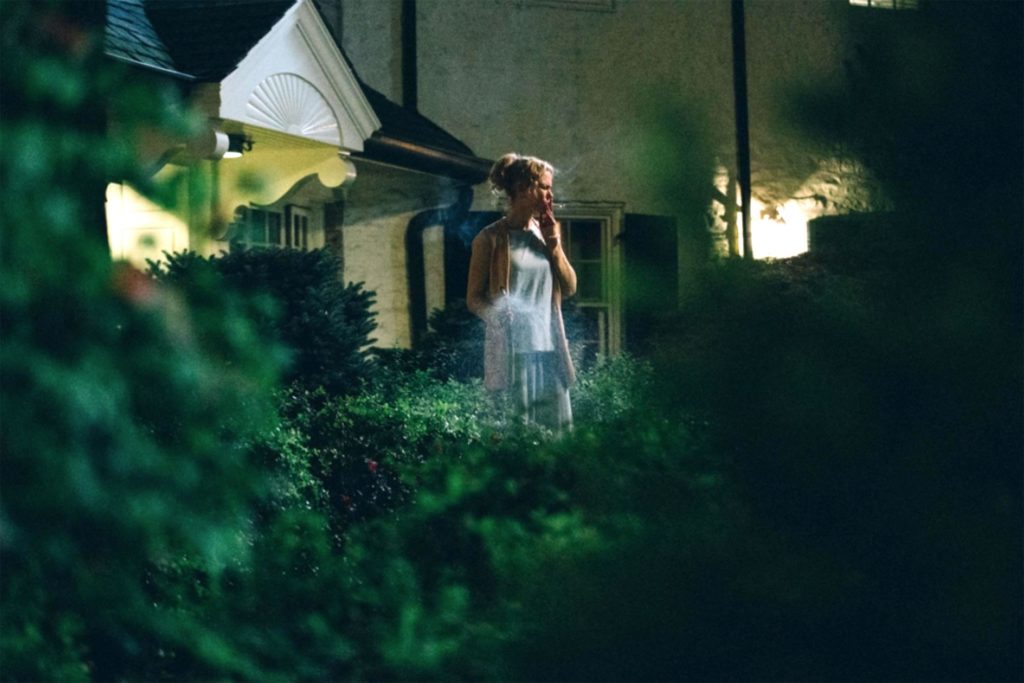 This kind of plot serves to further the idea that Lanthimos is a master of concept and an intriguing craftsman of execution. Rather than blow us away with the full suspense this kind of plot drives, he opts for subtlety accented by humor and, in doing so, twists a dark narrative full of surprises that spark uncomfortable laughter and hideous sympathy for characters seeming distinctly human in their contradictions.

There are wonderfully weird conversations and moments that will make you cringe. One includes a scene where Colin Farrell decides to visit his children’s school to ask their Principal if there is one child he prefers over the other, hoping that the answer will make his decision less painful. Another includes a similar conversation between Nicole Kidman, an actor who brings a powerfully intimidating stance against Farrell’s absurdity, stating that, if they were to kill one of the children, it would not matter, as they could always make another.

Killing kids will always be a touchy subject when taking stories to the screen, and of course we are disturbed by the image of any child being harmed, both by instinct and cultural standard. Despite this, Lanthimos has no problem bringing the subject to his work, as he hopes to make audiences feel wrong and hopes to add to an overall sense of disturbing cynicism when it comes to human conditions of selfishness and sin. We are not meant to feel happy about what’s happening, despite the laughter provided.

We are meant to be afraid of man.

All of this in mind, I was not surprised to find several folks walking out of the premiere, nor was I shocked when several French publications came forward in admitting they had either skipped the film or panned the parts they had seen. Lanthimos is divisively brilliant in what he brings to the table this time as he, again, challenges the precedent The Lobster has made for him in mainstream cinema to signal a return to his decisively malicious form.

This will not claim the Palme D’or, nor will it win any massive acclaim once it reaches the states. Instead, I suspect we’ll find fans of a more classic turn to cinema heralding Lanthimos as one of the greats, while others question whether he has a place in the hearts of a once widening audience.