There isn’t that much to say about The Lobster. It’s hard to look so far forward to something and then have it arrive. It’s a bit of a shock that the time finally and actually came and that, I think, it was as good as I had hoped it could be. All of the things you wish will be true are true. It’s beautiful, bonkers, and you could spend all day arguing about which actor was the definitive best. Pretty much: go there, wherever, to whatever dank cave wall it’s being blasted onto and plant yourself in front of its phosphorescent madcast. 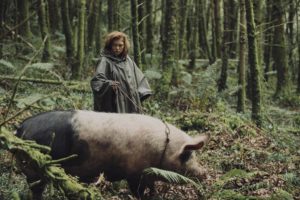 For some reason, the screening I went to was enormously well attended. I am never accurately able to gauge how early to show up at Kendall or if any of its frequenters care about the things playing down the hall. The room was full, period, sold out, such that the body heat generated triumphantly exceed the disillusionment and trampled acquiescence of Theatre 5’s air conditioning expectation. And that was great, because it needs to be seen that way, while people are still teaming and eager and there, because it’s funny. It’s super funny. So funny that you and your wry neighbor who said, “I was hoping I wouldn’t have to sit next to anybody” when you sat down will spontaneously look at each other in the middle of a scene to commiserate about how the madcap and hysterically imaginative antics are landing so solidly. Bizarre, considering the nature of the matter, how undeniably the audience of loners is briefly bonded together. It’s one of those rare times that you leave the theatre and have no insecurity around looking the other people in the eye (and ritually performing the traditional brow raised loll to stamp it officially as an embarrassment of riches). 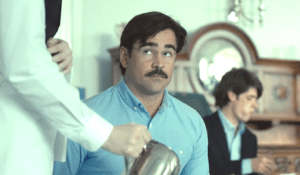 There was some concern that having to translate tone and topic for an audience of English speaking dummies would dilute the Yorgos Lanthimosity of the thing, but I don’t think that happened. I think that there is some allowed ambiguity, some decision making that needs to take place on the part of the audience about what is funny, but I think that was a big part of the fun; people’s different sensitivities afford them more or less laughter; the darker people get to laugh more, and scandalously exhibit themselves during moments of near unanimous gasp. That being said, there may have been more overtly funny moments, more obvious jokes than in Dogtooth, but those didn’t detract and rarely didn’t land and more importantly they initiated the newcomers; forced them open in the face of the off and nearly ugly, just from Lanthimos to get a running start, to build momentum with which to more horrifically slam them shut at the feet of the salacious and spectacularly sinister. At one mirrored moment toward the end, which probably made the Dogtooth vets cringe as much as or more than anyone, they were mystified, foundationless, so battered and disoriented that they voiced tentative and trembling guesses to themselves about things’ going one way or the other. And remarkably, I am not even sure we knew which we preferred anymore. 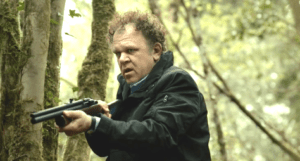 That is where the real power starts to bleed in. I am not sure that The Lobster will be as academically devoured as Dogtooth, but I think there are real, important, and powerfully made allegations about us, or, as in that last scene, that overpoweringly implicate us. The uncanny rituals that we create and consent to around match making and breeding, laughably sourcing predominant definitions from minor faulty traits, resigning ourselves to them, their simplicity employed as a match seeking compass, and the bizarre accompanying pomp for satisfying and convincing a community of juries, all arduous and mad and yet, at this point, all for what? Only so we can pass at the mall? So we can indulge our, now more deeply seated, consumer neurobiology in relative peace, knowing we are satisfying, with deference and thanks but quiet indifference, each other’s aged and fraying stem physiology? We want to pray to the new gods but we’re not quite ready to disavow completely the old ones, or let them see us doing it, without first allowing them a little adulatory drunkenness for old time’s sake? At the end there (in that scene that I cryptically referred to so that I don’t ruin it for the people who haven’t gone yet) we are being forced to interrogate our own shift readiness. Do we want him to do it? Do we want him to brutally sacrifice to the old gods, cast away his primary organ of appreciating the new? Of caressing the dopaminergic and precision milled curves of next year’s sleeker, steamier model? Is that the question? What’s your gut say? What, secretly, we’re you wishing for? Are you still intoxicated by the gore of romance? In devoted debt to the pagan altar’s blood supplicants of history? Do you wish you were? Saddened and nostalgic for those times, feverishly hanging on, going to further and more maniacal lengths to keep the traditions alive, equal exactly in measure to your fear that tragically, but obviously, they’re obsolete? Maybe. Someone check with Don DeLillo. That’s what’s so hard about it. It is somehow still so successfully romantic, enduringly, even after it makes crystal clear, with no shortsightedness, blind as we may wish to be, how crazy things like love have been, and how much more crazy they are becoming.