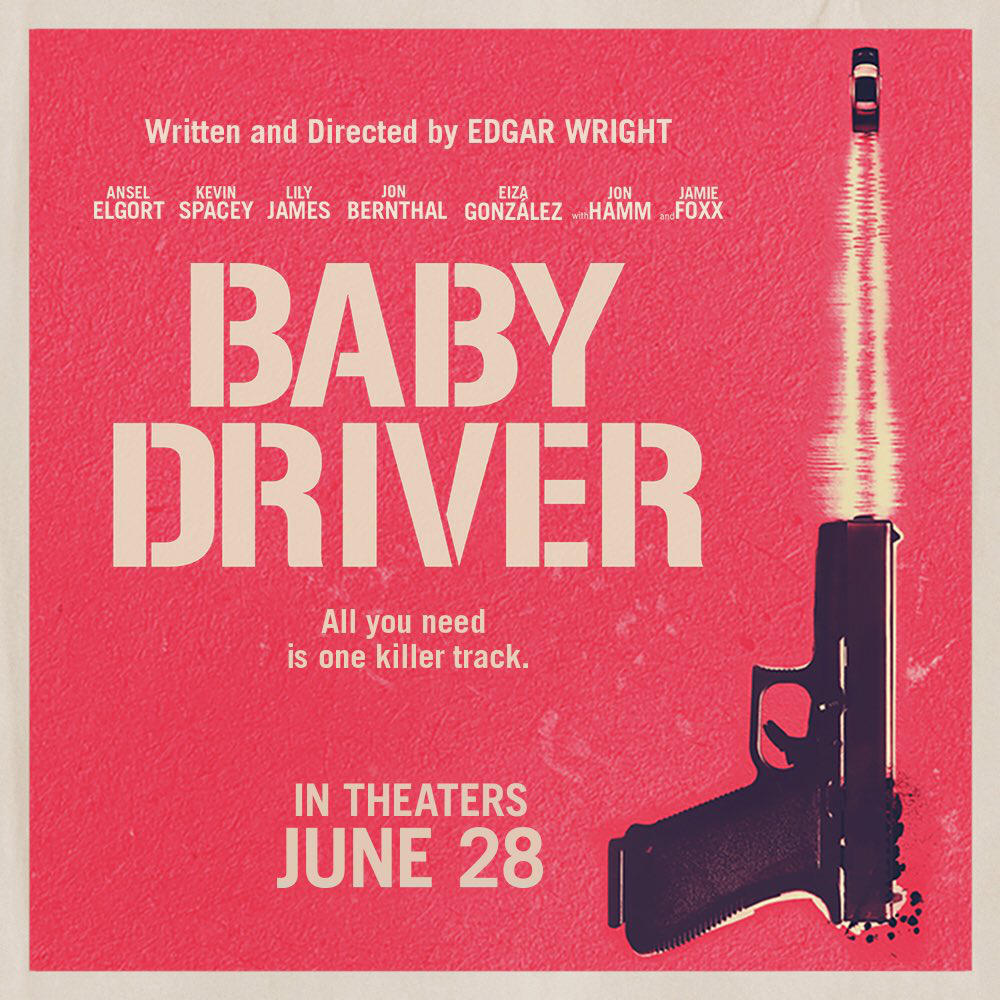 Edgar Wright has been positioned to take over Hollywood for over a decade now. He fits the role: an affable, energetic movie obsessive with an ear for poppy dialog and a knack for kinetic, endlessly entertaining action. Somehow, though, mainstream stardom has proven illusive. He’s made his name on his “Cornetto Trilogy” of genre parodies– Shaun of the Dead, Hot Fuzz, and The World’s End— all of which count among the most beloved comedies of the young century, but whose all-consuming Britishness have kept them in the “cult” menu on Netflix. His breakthrough was going to be Ant-Man, which he had been slated to direct since before Iron Man was released, but from which he exited shortly into pre-production, citing creative differences with the now-monolithic Marvel Cinematic Universe. It seemed like it also could have happened with his 2010 adaptation of the graphic novel series Scott Pilgrim vs. the World, which boasted an all-star cast and an irresistible hook, but was unfortunately aimed almost exclusively toward the BitTorrent demographic. Now, at long last, Edgar Wright has made his first “real” Hollywood movie, the not-so-furious but extraordinarily fast car chase movie Baby Driver. The studio seems to sense an imminent hit, moving it up to the July 4th weekend following a rapturous premiere at South by Southwest. At risk of jinxing it, Edgar Wright may have finally conquered America. Let’s welcome him.

Baby Driver, in a nutshell, is the story of a getaway driver named Baby, played by up-and-coming YA heartthrob Ansel Elgort. Baby works for straightlaced crime boss Doc (played by Kevin Spacey at his absolute Spaceyest), serving as a high-speed escort for a series of cockeyed, charismatic thugs (including Jon Hamm’s Buddy, Eiza Gonzalez’ Darling, Jamie Foxx’s Bats, and Joe Bernthal’s Griff, who oddly exits an elevator fifteen minutes into the film and is never heard from again). Thanks to a tragic origin-story accident as a child, Baby suffers from tinnitus, which he drowns out with an infinite playlist on a revolving series of iPods Classic (“One for each mood,” he deadpans). Baby meets a lovely waitress named Debora (like the T. Rex song, not Debra like the Beck song, though both are discussed, sung by the characters, and featured on the soundtrack). As good kids wrapped up in organized crime tend to do, Baby decides to leave his old profession behind to become the world’s greatest pizza delivery man, but, as they always do, Baby’s past proves harder to shake than the Atlanta PD. 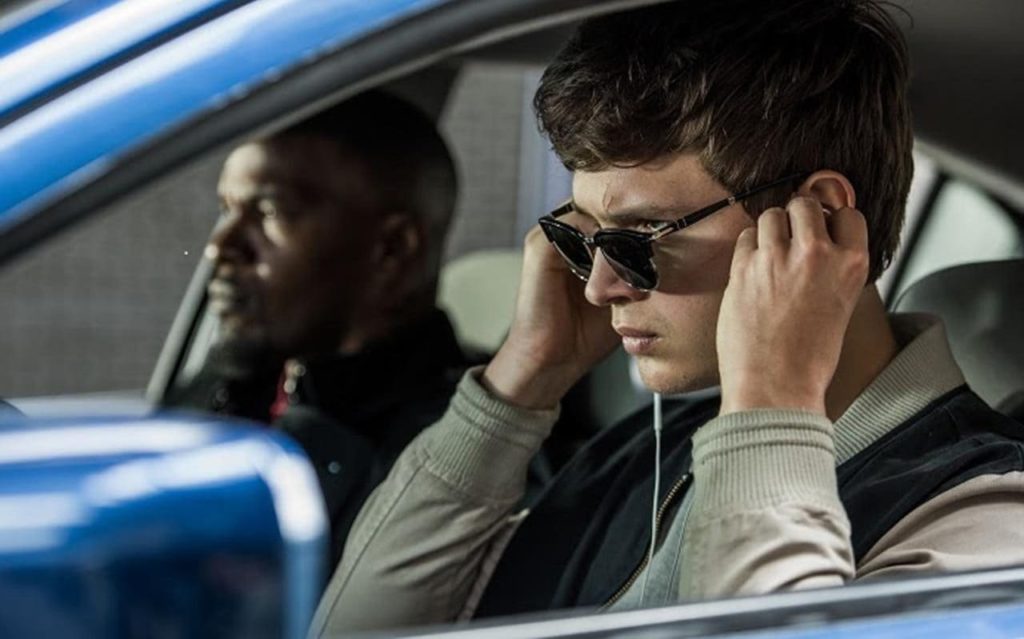 Like the best films of Mel Brooks, the secret of Wright’s success lies in the fact that he loves, respects, and understands the genres he’s sending up. Shaun of the Dead, for example, plays as a parody of zombie movies, while also serving as a fully functional example thereof. Likewise, even if you ignore the humor, soundtrack, and pop cultural references of Baby Driver, you’re still left with several of the most phenomenally thrilling car chases in recent years, or possibly ever. Actually, let me amend that. You can’t separate the car chases from the jokes and the music, because rather than distracting from each other, these three essential elements work in tandem to create something breathtaking. I’m not speaking metaphorically, either: by the end of the opening car chase (choreographed to Jon Spencer Blues Explosion’s “Bellbottoms”), I literally had to catch my breath. This scene was immediately followed by a second opening sequence, in which Baby dances on a coffee run to the tune of Bob & Earl’s “Harlem Shuffle” (how refreshing to hear that fanfare on a soundtrack not followed by “Jump Around”). While not as flashy as a high-speed car chase, this sequence actually proves to be the more ambitious of the two: each lyric is illustrated on graffiti or billboards as Baby skips past, and figures pass through the background and foreground precisely on the beat. The whole scene (and many subsequent action set pieces) plays like a long-form grander scale version of a Michel Gondry music video.

As a presence, Elgort takes some getting used to. His flat affect initially seems to cut against the film’s furious pace, and his prettyboy looks make for a far different leading man than Simon Pegg or Nick Frost. But as the film unspools, it becomes clear that he was cast for precisely these traits. As a getaway driver, Baby is forced to be cool and unemotional, which makes it all the more endearing when we see the pure joy he takes in his music. In particular, there is an early scene in which Baby dances with his foster father, Joseph, to Carla Thomas’ “B-A-B-Y.” Joseph is deaf and wheelchair-bound (as is CJ Jones, the actor portraying him), but Baby places his hand on the speaker to “hear” the music, and the effect is wonderfully sweet. As a character, Baby is equal parts The Driver and The Little Tramp.

But the real star of Baby Driver is without a doubt its soundtrack. As a recovering record store clerk, I tend to be neurotically critical of records in film– it’s always apparent when characters talk about an artist the screenwriter is unfamiliar with, and I grind my teeth when every time I see that fake John Denver label in Final Destination. With Baby Driver, Wright once again proves that he is just as much of an obsessive as his characters. The soundtrack is curated with enough love and care to make a Tarantino soundtrack look like Godzilla: The Album, and only Goodfellas matches it for pure wall-to-wall scope. But the use of music in Baby Driver actually goes beyond that. Rather than serving as a counterpoint to the action onscreen, the pop songs serve as the primary structural element. Cars rev to rolling basslines, edits are cued to trumpet blasts, and even gunfights are meticulously timed to mimic the rhythms of the soundtrack. Some films need to be watched twice to fully comprehend the plot; Baby Driver demands repeat viewings to catch all the nuances of the song selection. 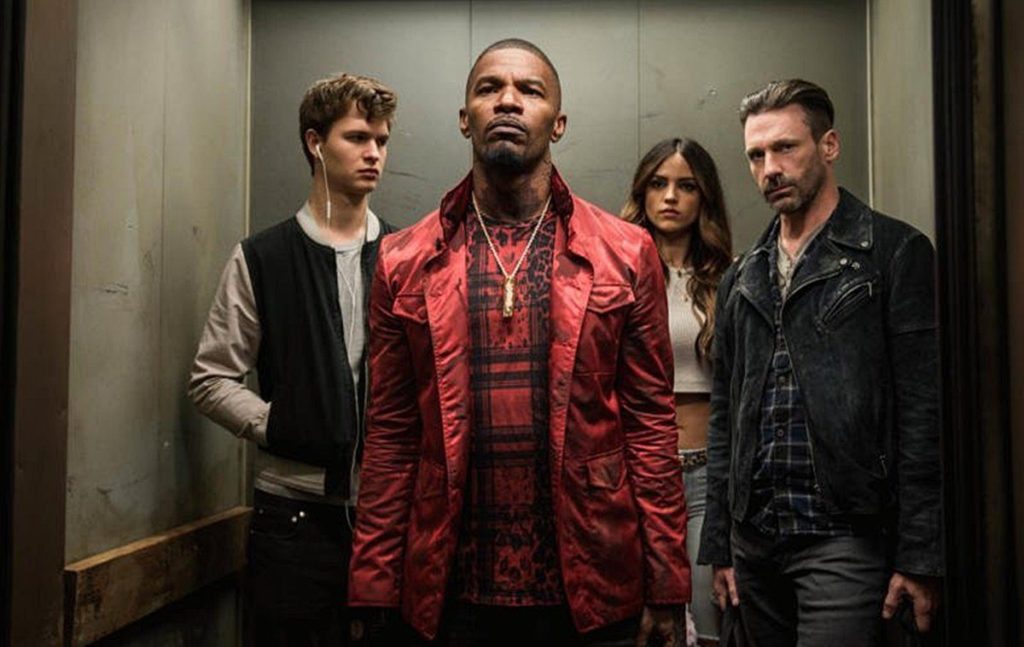 All that being said, Baby Driver is not a perfect film. At nearly two hours, the frantic pace eventually becomes exhausting, and the second act sags a bit under the weight of the plot (particularly in stretches inexplicably lacking music or car accidents). While the cast seems to be having the time of their lives, Foxx occasionally appears to be playing a character from another film, bringing a level of genuine menace at odds with his lovably seedy gangmates. And I mentioned it before, but I can’t stress enough the oddness of Joe Bernthal’s early departure from the storyline, both because of the high profile of the actor, and because the callback is one of Wright’s signature tools as a storyteller. Under ordinary circumstances, Edgar Wright is the Annie Oakley of Chekhov’s gun; for such a prominent first-act character to disappear without a third-act payoff suggests that Bernthal had a scheduling conflict, or perhaps got focus grouped out of existence. Though considering the fact that the plot and characters primarily serve as vehicles from one giddy set piece to the next, perhaps it doesn’t matter.

But I don’t want to harp on the bits that don’t work, because the parts that work, work really well. Baby Driver is one of the most inventive and original summer blockbusters to come down the pike in ages, and I can’t recommend more highly seeing it in a packed theater with a very loud sound system. It’s hilarious, of course, but it’s also legitimately incredible filmmaking, and it does things that I’ve simply never seen in a movie before. Time will tell whether this will be the hit that ushers Edgar Wright into the pantheon of Hollywood power auteurs (there have certainly been stranger examples), or if it will simply live on in repertory screenings for an adoring cult. But mark my words: it will be shown in film schools for years to come.