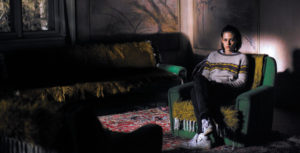 “All that is solid melts into air” — still Marx’s greatest hit.

With apologies to the biographical fallacy, I think it’s safe to say that French filmmaker Olivier Assayas is, like the character played by Juliette Binoche in his 2014 film Clouds of Sils Maria, a man possessed. Possessed, that is, by his own younger self. (Probably selves, plural, but why over-complicate things? We may come back to this later.) Now in his early 60s, Assayas, in photographs, looks slim, slacker-chic casual and terminally youthful, even as his hair and skin begin to betray the slow creep of decay.

In Clouds, Binoche plays Maria Enders, a famous but insecure actress of a certain age. An emotionally needy but not un-sympathetic narcissist, whose life is tended to in its myriad quotidian details by her constant companion and personal assistant, Valentine, played by Kristen Stewart, Maria has been asked to return to the play that made her career, in which she dazzled as a young protege whose brilliance and beauty threaten her aging mentor. This time, however, twenty years later, she is expected to play the older woman–and she can hardly stand it. Line readings with Valentine trigger tantrums, accusations, attacks and reversals. In what may be the film’s most astonishing sequence–I was reminded of the final scene in Stalker (1979), when the unmoved (but not unwitnessed) glass suddenly skates across the table — the two women, hiking in the Alps (the hills are alive, man), vanish from our sight as they descend together into a valley. When they re-emerge on the other side … well, they don’t — that is, only one of them does. We never see Stewart again. There was nothing to see, or nothing other than our seeing it.

Personal Shopper also take us to the “other side,” but the other side of what? If in Clouds the operating partition is a mirror of memory that coils time and self into a siamese snake, then in the newer film (unmistakably a companion piece to the first) the partition is death itself. Or so it initially seems. As the film progresses it becomes clear (a relative term) that the mirrors have multiplied, that they’ve been augmented by a wilderness of cell phone screens, and that Assayas is having a hell of a time chasing after and playing with their refractions and reflections. The result is a cheekily cerebral, self-indulgent film about solipsism in the guise of a goosefleshy ghost story.

More than one spectre is haunting Maureen Cartwright (Kristen Stewart) in Personal Shopper, and that seems only fair, because she is haunting, or hunting, at least one of them herself. The spirit she seeks, by sitting alone night after night in what had been his home — a now nearly empty, rather eerie, more-eldritch-by-the-evening husk of a house just outside Paris — belongs to her twin brother, Lewis, whose life was commuted by a heart attack a few months before the film opens. Maureen shares the genetic “malformation” that overrode the ordinarily heart-protective properties of his youth. There but for the God-knows-what goes she.

Both Cartwrights are — I’d say “were” were it not for Lewis’ apparent persistence — mediums. The kind of mediums that sense presences, hold seances, communicate with the immaterial world, the ethereal plane, maybe even the dead. Maureen is also a “personal shopper,” employed by a very rich fashion-world celebrity for whom trying on and buying her own clothing is strictly infra dig. This means much of the film consists of watching Kristen Stewart, as Maureen, try on obscenely expensive outfits that she could never conceive of owning herself. Besides being her job, doing so partially satisfies, but mostly aggravates, a desire to be someone else completely. It’s another version of mediumship, you might say.

As is acting. What is an actor if not a personal shopper? Or perhaps not exactly; perhaps an actor is more like a model, trying on self-fits for us, giving us options for emulation, lifestyle-wise, anystyle-wise. A cipher herself, the actor is a golem-like figure, inscribed within an artifice and animated by a script. An actor’s virtuosity, in this reading, is an aspect of his vacancy — meaning not vacuity, but availability to new lodgers.

Kristen Stewart is available. You can see through her. Really, try it. Walk in and have a look around. Spend the night. It’s a neat trick, and in a film like this, a necessary one. 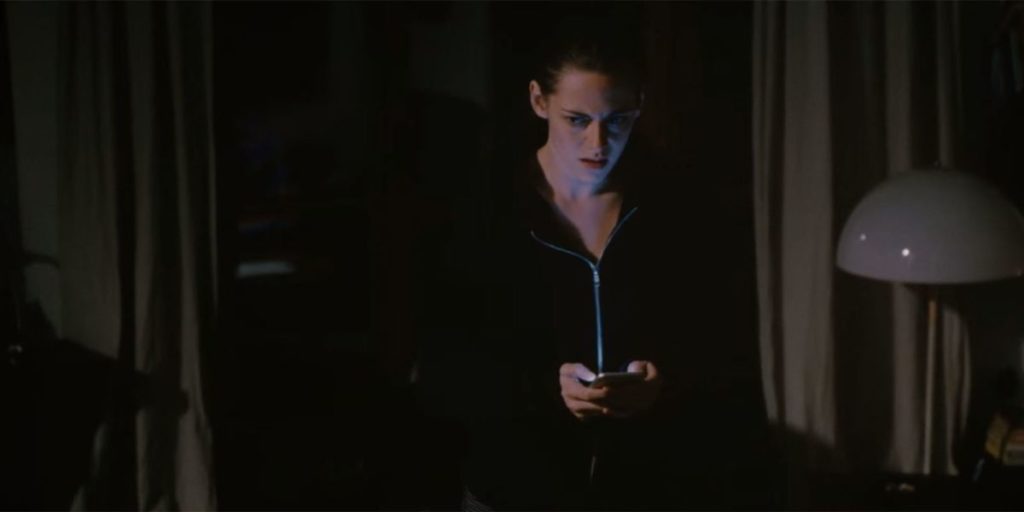 I want to qualify my use a few paragraphs ago of the term ‘self-indulgent.’ Its standard onanistic connotations may apply here as well — a possibility I pass over without judgment — but what I really mean is that Assayas both feeds and dresses Personal Shopper’s central self very extravagantly. Price is no object. Neither, perhaps, is a person. Each, Assayas seems to be saying, is a transaction, a transferable abstraction, that can only be embodied in passing — can only be embodied in its passing — by a medium, whether natural or artificial, such as a painting, a necklace, a pair of shoes, or a human being.

Global capitalism is a kind of vampirism without a vampire in Personal Shopper. (Assayas, of course, knows from vampires, cf. Irma Vep (1996).) The motif of a flaming O gapes and gapes again: in a painting (The Swan) by pioneering abstract artist Hilma af Klint; on a t-shirt worn by Lewis’ replacement for his girlfriend’s affections; in the name of Maureen’s boss’ (demon) lover and apparent murderer, Ingo (Lars Eidinger), and in the country of our final destination, Oman. You might even say that global capitalism is the film’s penultimate personal shopper (the buck still stops with death, natch), an inescapable medium and maw for the invention and consumption of souls, or, if you prefer, selves.

Something similar might be said about the economy’s handmaiden, networked communication, which dominates the movie’s runtime–and generates much of its suspense–via the constant texting between Maureen and what she desperately hopes is her spectral brother. For all of the film’s relentless attention to the hollowing and decking out of solipsistic selves–the boom and bust of desire and dust–something like social commentary is going on here as well, a vitiated, visionary farce about imperial showrooms and the emperor’s new clothes.

Confronted at last by the presence she both seeks and seeks to escape, Maureen says something that could be either “I don’t know you” or “I don’t owe you.” It’s an ineffable, irresolvable moment, even if it turns out I’m just hard of hearing.

Assayas has now made a pair of films about ostensible pairs. One half of one pair is, in fact, a part of the other; the two fold into one across quasi-linear, back-doubling time (Clouds). One half of the other is, in fact, a way-station for a steadily, dreadfully ramifying regiment of things, all in one and all for sale (Personal Shopper). At least, those are the facts as I see them. I recommend seeing them for yourself. Haunted by Bergman’s Persona, and amost as giddy as they are queased out by the vaporous, half-fantastic freedoms of the wealthy West, these two films enrich and become one another. They may become you, too.