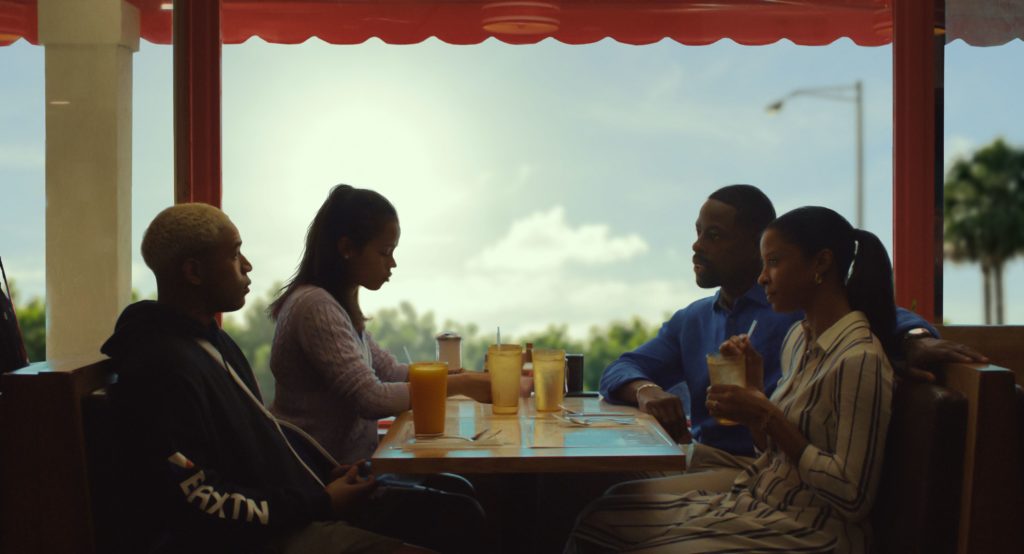 Teenagers are constantly busy and burdened, both by the choices they make for themselves and choices that parents make for them. This cannot be more true than in Trey Edward Shults’ Waves, which was released Friday.

Tyler (Kelvin Harrison, Jr.), a Florida high school student and wrestler, seems like he has it all. A loving girlfriend, Alexis (Alexa Demie), supportive parents (Sterling K. Brown and Renee Elise Goldsberry), and younger sister Emily (Taylor Russell) complete the picture. At the beginning of his senior year, Tyler’s life is going well, though he occasionally butts heads with his dad. Until, of course, it isn’t.

Lacking the proper life experience and maturity, Tyler chooses not to tell anyone about the sudden shoulder injury that threatens the rest of his high school and college wrestling career. He resorts to popping pain pills and continuing to wrestle against his doctor’s orders. From there, everything seems to spiral out of control. His dad gets more aggressive with his demands, arguing that black people need to work harder than white people to get the same credit. Even Tyler’s carefree relationship with Alexis falters when she reveals that she is pregnant.

Drew Daniels’ cinematography opens the film with a fluid camera shot, showing the sunny days of September. The moving frames reference past nostalgic moments and capture happier times. As everything in Tyler’s life begins to unwind, the cinematography assumes a frenetic energy, both in motion and visual style. During pivotal moments, the entire film undergoes massive color changes while the score—by Atticus Ross and Trent Reznor—thumps like a heartbeat, growing louder and louder as we tumble towards disaster.

The film, already daring and innovative, becomes even more so through its characters and their burdens. Russell, for example, carries an immense amount of weight as the film continues. Her brother’s choices and her parents’ expectations enclose her as she fights to navigate the world on her own terms. Emily ultimately embarks on a road trip that yields some revelations that even Tyler didn’t find.

All of the actors in Waves imbue their characters with fully-realized lives outside the limitations of the screenplay, also written by Shults. No one does that quite as well as Sterling K. Brown. We’ve seen his type of character before. In 1997’s Selena, Edward James Olmos’ character says “We have to be more Mexican than the Mexicans and more American than the Americans, both at the same time! It’s exhausting!” It would be so easy to rewrite a character who’s already been written, and fail to deviate from them. Instead, Brown gives his character the emotional range and eventual maturity to come to terms with both his son’s life and his own intense parenting style.

I expect this film will easily make a few Best of 2019 lists, both for its daring visual style and intense performances. Shults has created a masterwork, which challenges its audience to reevaluate their own perspectives. I suspect that’s the whole point. Waves transcends the line between the surreal and the real, and serves as a testament to the resiliency that marks the human spirit.