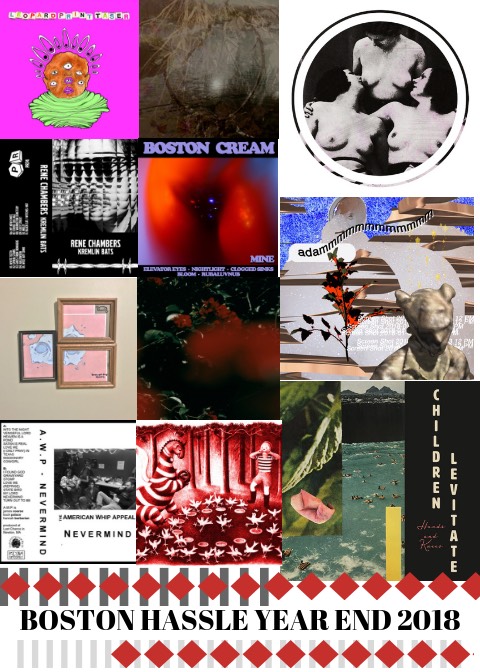 Remember when Cambridge Analytica and Facebook told the world to go fuck itself when the political consulting firm illegally took information from 50 million users to influence a political election?

Luckily however we here at the Hassle have no analytics or ways to track who our users are or anything about anyone who comes to this website. Quite frankly, we have very little to no idea if anyone reads this site, I don’t even know basic HTML.

That’s beside the point however because what I’m getting at is there is no way to influence this list of the baddest music to come out of Boston this year. I humbly as ‘music editor’ put together an unranked, unordered list to highlight records not gathered elsewhere in Boston.

That’s because we just care about the music, and the writing. We get the job done with elbow-grease, soul, and a little help from friends. No political lobbying, spyware, grandstanding, or business models to get in the way of this mission, yet!

So, akin to last years year ender, I bring you a best of list among many other best of lists.

Boston Cream had a big year. Not only did they put out this killer EP, Melanie Bernier, lead singer of Boston Cream, has been collabing with our print brothers at the Boston Compass to churn out some of the headiest environmental tips this side of Mass Moca. With music reminiscent of a different Boston when the Boston Cream doughnuts were bigger and 93 was above ground, these rockers pack a dance new wave punch into the nostalgia laden Boston landscape.

Brittle Brian and Sundog’s split, My Sun, Brian, careens down a river along the way with a cover of Michael Hurley’s Troubled Waters. While not precisely off Erased!Tapes, Sundog’s label, this one takes the cake from the JP contingent that’s come off an epic- publicly lauded year. Lo-fi, non-art yet still with a groovy, cool aesthetic this EP is emblematic of the ease of which the neighborhood of JP can continually churn out epic music.

This album was not released in 2018, but late 2017, however, Briar Lake’s string of performances with songs off the album were probably some of the best performances not widely seen this year. The music and poetry bottled in these recordings are impactful and never pandering or forced. I listened to this album over the summer with my friend and fellow writer for the site, Clara Messina. While the stucco of the ceiling was a kaleidoscope and two friends were undergoing a healthy bonding experience, this album soaked into my subconscious as one of the highlights of the musical year.

To me this is one of those albums I had to listen to a few times before, the gnarly guitar whales slapped me in the face like southbound traffic on route 1 in the morning. After that its all estranged bewilderment until you become unaware of your surroundings and actually think its okay to dance in your car. But it is okay because it’s freaking Rene Chamber’s AKA Jim Leonard, a Somerville based musician and designer signed to Plastic Response who makes swinging, character heavy dance rock that drips with a medicinal propaganda reminiscent of what the cold war must have been like in this same traffic, under the cryptic shadow of the Hilltop cactus in the middle of New England winter.

Pain Chain, Noise musician, artist, and outspoken political liberationist does not just make noise music but lives noise music. Since January 2018, Pain Chain has put out 22 releases or splits, played Hasslefest and numerous other shows and has continued to put on provocative performances that bring the weird and wild to get weird and wild, that is, if noise music is your thing.

adammmmmmmmmmmmmmm off Boston’s Media Rins label put out a provocative album early 2018. Along with label mates, Media Rins is leading the way in Boston’s electronic experimental music scene. These folks don’t shy away from the gnarly, imagined dystopian cultures. They act with enough force to forge that image onto the present as if to say ‘are we already here?’

Ill Addicts are the whole package. Performance, cutting bars, music, the aesthetic, laughs. This South Shore rap contingent packs a punch and with their first EP in Tide Over, they combine some of their best songs with some new songs that look to make 2019 a big year after coming after playing a slew of Hassle Shows, including, of course, sharing The Lilypad with none other than Abdu Ali and Brandie Blaze.

AAYOTEE – A Sonic Collaboration of the Dear, Near and Far

Kevin Dacey is a serious musician. Not only in actually playing the instruments, but also by means of collaboration across the northern east coast of the Americas. Playing with over 30 folks in Massachusetts, New Hampshire, Vermont & Quebec, this album runs deep with unique musical textures and adventures too fearsome to ignore or look over just once. This is an album, much like an onion or a sensitive person that is complex, pungent, and rich with layers. This is one heck of a piece of art.

Pink Navel – Born on the Stairs

Pink Navel comes from Maine and put out a beautiful, nostalgia laden, honest rap album. Not only are bars continually unpacked through these anthem like songs, the brutal honesty and the idiosyncratic character of Navel is the friend you need when you have none, whatever arc of the emotion spiral your serotonin level yields you. Music visceral as it is cosmic, complex as it is tangible, now a member of Milo’s Ruby Yacht Club label off strings of tours and big venue performances, Pink Navel is a grown rapper now.

Leopard Print Taser are Leila Bower, Nick Wolf, Reid Calkin and Shannon Donahue and they rip. Teeth are Not Bones, a ripping 4 song EP, is, I’m hoping, their last EP before they release a full length album sometime in 2019. Angry, restrained, and always cool, Leopard Print Taser prowl Somerville and Cambridge regularly and are true to the scene vets with roots and plenty of good vibes to go around.

The Guiding Wave – To Dance Around Love

This record is just too good to keep off this list. Shining with summer and Boston scenery, Hands and Knees know how to make a record.

(American) Whip Appeal put out new music late 2018, which the hassle still hasn’t heard the entirety of until we get the full tape. Thanks James and KLYAM!