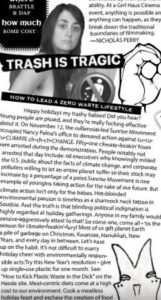 Happy holidays my trashy babies! Did you hear? Young people are pissed, and they’re really fucking effective about it. On November 12, the millennial-led Sunrise Movement occupied Nancy Pelosi’s office to demand action against cu-cu-cu-CLIMATE ch-ch-ch-CHANGE. Fifty-one climate-freakin’ foxes were arrested during the demonstration.

People notably not arrested that day include: oil executives who knowingly misled the U.S. public about the facts of climate change, and corporate polluters willing to let an entire planet suffer so their stock may increase by a percentage of a point.

Sunrise Movement is one example of youngins taking action for the sake of our future. But climate action isn’t only for the babes. Hot-blooded environmental passion is timeless as a shamrock neck tattoo in Southie. And the truth is that blinding political indignation is highly regarded at holiday gatherings. Anyone in my family would passive-aggressively attest to that! So come one, come all – ‘tis the season for climate-freakin’-fury!

Most of us gift planet Earth a pile of garbage on Christmas, Kwanzaa, Hanukkah, New Years, and every day in between. Let’s ease up on the habit. It’s not difficult to marry holiday cheer with environmentally responsible acts:

Can you pick one and do it? I dunno – is the Model Cafe a mass hallucination authored by blacked-out Silhouette rejects? That’s a hard YES!

This Week In Experimental: Volume 56

Hello Experimenters!   I fell asleep thinking about how excited I am to introduce next week’s assignment to you and how much…

This Week In Experimental: Volume 55

Hello Experimenters!   What a truly strange time to be alive. I’m admittedly distracted today by the attacks on Palestinians and Colombians,…