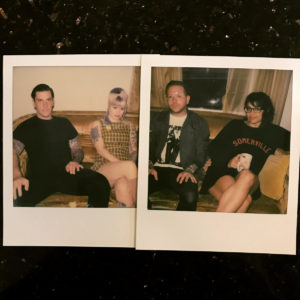 Over the past year or so, I’ve had the pleasure of running in to the band members at vegan restaurants (shout out to Taco Party) & cafes around Somerville & Cambridge. & Don’t let these silver-tongued words I spew over the internet fool you, I’m actually awkward (as fuck) & still, these self-ascribed ‘goof-balls’ did an interview with me as less of a writer, & more of an awestruck fan.

With a new album on the horizon, through the bullshit of being artists & musicians in a gentrifying Boston & general hair style maintenance, Leopard Print Taser has the narrative & musicality to take a seemingly overdone genre of music & breathe into it new life while still packing a rebellious punch. Groovy yet biting, their image & music is a reflection of a current Boston underground that reminds us all their is still a vibrant scene here filled with devoted, serious working artists.

‘Musicians, like all artists, exist as a reminder that to some, more enjoyment can be found in something you love than something that guarantees a reward’ Nick Wolf asserts on the role of musicians in the scene. Wolf, a Boston music scene vet who’s played with drummer Reid Calkin in Lunglust & Wolf’s other project Ascend/Descend as well, is a main-stay in Boston hardcore/metal circles. ‘While you see plenty of artists toil away at their craft without gain, well into middle age, you don’t see that in most areas of interest.’ The guitar riffs of Wolf & take no prisoner’s vocal torrent of Leila Bower imbue this music with a sense of risk, as if the listener is walking a tightrope with the musicians. 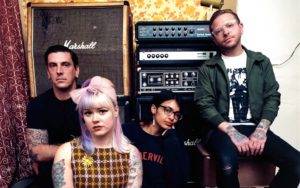 Nick Wolf goes on to say ‘musicians make sacrifices’ & from perhaps more than my perspective, these sacrifices are becoming more and more apparent if you’re going to work as an artist in this city. On the notion of ‘selling out’ there is no wonder why there seems to be unanimous consensus within LPT & the scene as a whole on the idea of making art for profit. Bassist Shannon Donahue puts it eloquently ‘it’s one thing to get paid to make music so you CAN continue to do it, it’s another to make art you don’t even believe in.’

LPT makes real & inclusive the DIY, punk culture that has seemed so exclusive in the past. ‘In fact, we do everything in house other than mix. We record ourselves, we screen our own merch from designs we create. I even dubbed the first ep one at a time from the recording session on my computer’ Nick chips in. The importance of making their lifestyle a major part of their music is something indispensable to the band’s early success & adds a distinctly Boston sound & attitude to the mix. & did I mention they are all cool as hell!? 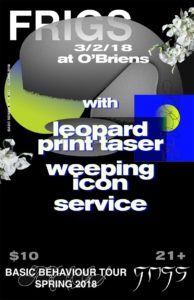 Chris Hughes is a Music Editor & Contributor for the Boston Hassle. He can be reached at [email protected] or via twitter & intstagram @crsjh_