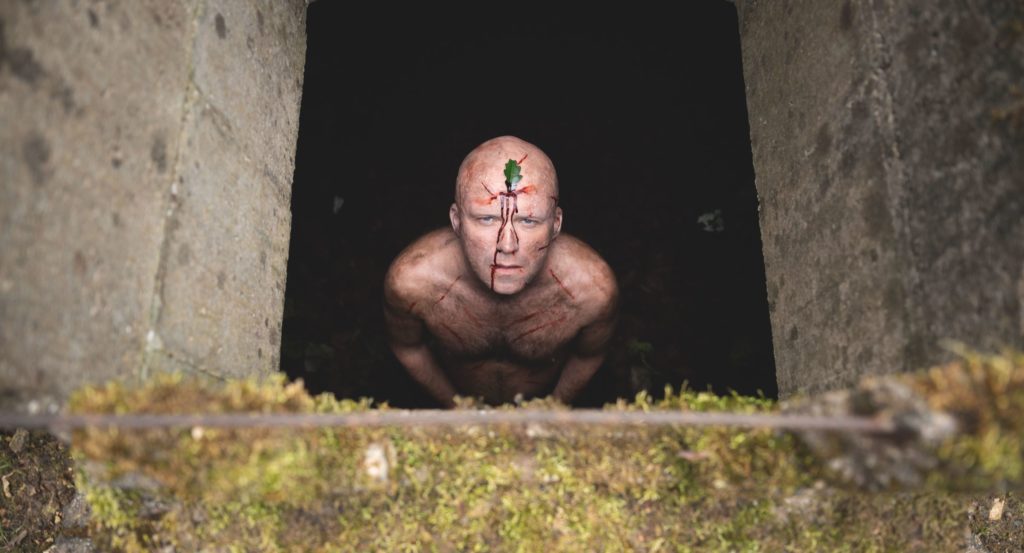 As the Hassle’s Julia Gunnison noted in her review, distributors were initially concerned that the Audrey Diwan’s abortion drama Happening was not sufficiently topical, only to be proven dramatically wrong by the timing of its release. One would have to be even more out of touch to think the same about Men, the darkly satirical new horror film from director Alex Garland, which uses its genre trappings to explore the real-life psychological and physical dangers posed by the title creatures. Like Happening, the timing of its release can’t help but feel grimly apropos, but I suppose that’s the upshot: there is, unfortunately, never a bad time to release a horror movie called Men.

The woman in Men is Harper (Jessie Buckley), who rents a remote cabin in the English countryside to decompress following the suicide of her husband (Paapa Essiedu). At first, it seems idyllic: the cottage is lovely; the owner, Geoffrey, is friendly if eccentric (“He’s… a very particular type,” Harper tactfully explains to a girlfriend via facetime); and the surrounding forest is lush and full of trails. It is on one of those trails, however, that Harper makes an unsettling discovery: a pale, bald, and very naked man who follows her home and attempts to force himself into the house. A local bobby arrives and arrests the assailant, but releases him on his own recognisance the following day, dismissing Harper’s concerns as hysteria. Harper attempts to clear her head at a nearby cathedral, only to be cursed at by a young boy and patronized by the vicar. The barflies at the pub leer at her– as does the naked man, still lurking on the outskirts of the estate. Oh, and did I mention that every man Harper meets– Geoffrey, the stalker, the vicar, even the little boy– are all played by the same actor (Rory Kinnear)? 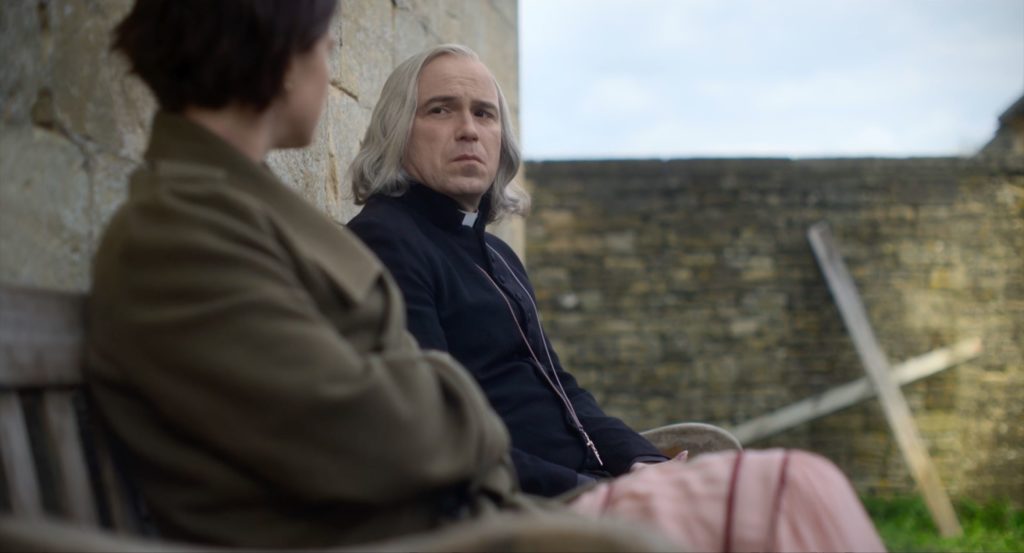 Even in this age of horror-as-metaphor, Men is profoundly unsubtle in its commentary; from the title to the casting, it will be clear to all but the most oblivious viewer that the terrors that befall Harper are meant to represent the omnipresent threat of rape culture and toxic masculinity. The men all have the same face, the film suggests, because all men do have the same face– or rather, represent different faces on the same inescapable, monstrous entity. Feral wildman aside, much of Harper’s ordeal comes off as all too plausible; her abhorrent treatment at the hands of the locals never quite feels as outrageous as one might hope. Some movies smuggle their social message within a horror narrative; Men all but straps it to the hood.

But a funny thing happened while I was watching Men: I realized that its lack of subtlety is not a flaw, but rather its greatest asset. Recent entries in the “elevated horror” cycle, such as Master (in which the real horror is institutional racism) and Antlers (in which the real horror is opioid addiction and rural poverty), have been dour, po-faced affairs, so intent on making their points that they become a chore to sit through. Men, on the other hand, is absolutely wild, just as likely at any given moment to deliver a gross-out gag or a laugh-out-loud line of dialogue as a moment of shocking violence (though, to be sure, there are plenty of those as well). Men is a work of social horror, but it’s leavened with other strains, notably folk horror (it is the second A24 movie in as many years to draw upon the imagery of the green man and the woodwose) and body horror (as in a jaw-dropping finale, which brings to mind Brian Yuzna’s Society). Though obvious in intent, Men is unpredictable in action, and rarely dull.

Even in its weaker moments, Men benefits from the fact that it’s anchored by a hell of a lead. By my estimation this is Jessie Buckley’s first true horror outing, but much of her work plays in similar tonal areas: the elliptical nightmare of I’m Thinking of Ending Things, the wretched motherhood of The Lost Daughter, the true-life apocalypse of HBO’s Chernobyl. Though her rising star may soon price her out of the genre, she’a a natural fit for it, and particularly the off-kilter strain seen here. With her haunted face and crooked half-smile, she’s able to convey both wry bemusement and unfathomable terror in a single beat. She’s the perfect “final girl” for viewers who feel that they’re above such tropes, savvy and intelligent enough that, when she gets scared, you believe it. 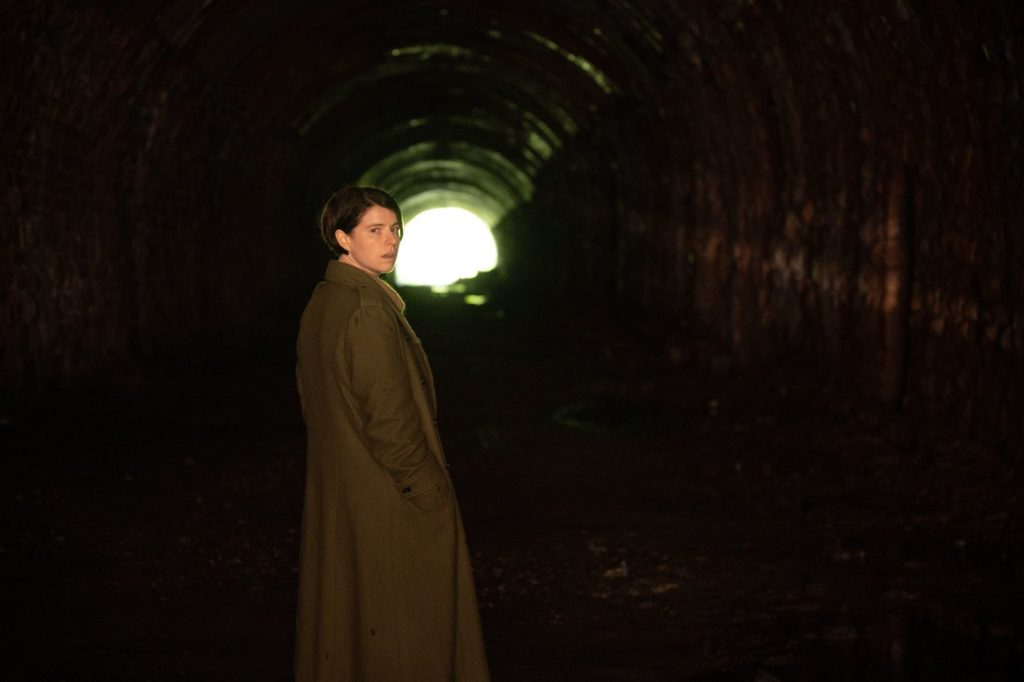 But the most distinctive element of Men is Kinnear; he does, after all, play the title role. Kinnear is enough of a chameleon that, if not for the decidedly uncanny CGI required to turn him into a prepubescent child, one might watch the entire film without realizing that they’re watching one actor play 90% of the characters. His various roles fall along a spectrum, ranging from the apparent harmlessness of Geoffrey to the subverbal id of the Naked Man, but each represents a potential threat; most approach Harper with what one might call malevolent indifference, an all-too-familiar cocktail of hostility and dismissiveness. After a few iterations Kinnear’s endless parade of disguises begins to feel a bit sketch-comedy (the tone at times feels like The League of Gentlemen with the dial cranked a few more notches toward horror), but, again, this is a feature rather than a bug, and the humor of such scenes (such as the vicar genteelly dispensing the most horrific “advice” imaginable) is clearly intentional. While I wouldn’t wish typecasting upon anyone, I can’t help but look forward to seeing Kinnear turn up in various creep roles for years to come.

Men, with its mix of heavy-handed satire and truly harrowing domestic scenes, won’t be for everyone. But at a time when Prestige Horror is starting to become as rote and monotonous as Prestige TV, I found its inventiveness and lack of inhibitions refreshing. Garland is a filmmaker of boundless ideas, and while not everything here is perhaps fully baked, Men had me gasping with surprise on more than one occasion. Men is a startlingly weird movie for unsubtle times; may we all live to see a day when someone might deem it “not topical.”