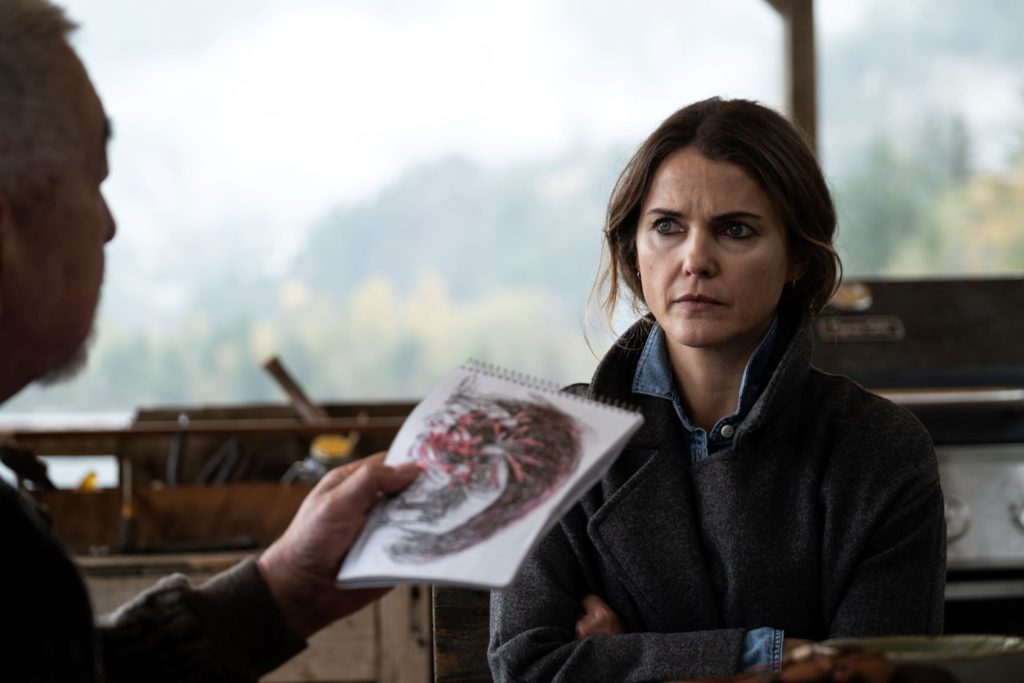 As a genre, horror has a funny way of representing cinema at both its most original and its most derivative. With its natural inclination toward the supernatural and the disorienting, horror filmmakers can be remarkably adept at slipping canny social commentary and true experimentation into what is, on its surface, a crowd-pleasing thrill ride. But for each innovator in horror there are a dozen mercenaries, and each jolt of originality within the genre is followed by an entire cycle of pale, formulaic imitators. We saw this happen forty years ago, when the bold, auteurist fright films of the 1970s were followed by the slasher-industrial complex of the ‘80s. History, of course, tends to repeat: just as the 2010s saw new life breathed into the genre by a wave of daring indies and stately studio pictures, so do the 2020s appear intent on capturing that zeitgeist and beating it into the ground. But where the horror films of the 1980s synthesized the brutal scares of the ‘70s into fun, poppy trash, the current cycle appears intent on translating the seriousness of “elevated” horror without the gambits that made the genre’s past decade so thrilling. I went into Antlers hoping for something unique, but left mostly bummed out.

Keri Russell plays Julia Meadows, a schoolteacher returning to her hometown in the woods of Oregan following an extended absence. The town has clearly seen better days– like many communities across the country, its principal economy appears to have shifted from mining to methamphetamines– and this depression has spread to its hardscrabble youth. Julia finds herself particularly haunted by young Lucas Weaver (Jeremy T. Thomas), a gaunt, sunken-eyed boy who sits in the back of the class scribbling increasingly alarming doodles in his notebook. Julia is, of course, right to worry: Lucas’ father and brother were attacked by… something… in an abandoned mine, and now he’s left alone to watch over… something… chained up in the attic. As Julia grows increasingly concerned, she attempts to enlist her brother, local sheriff Paul (Jesse Plemons) to help get to the bottom of things. But Paul finds some of the stories a little hard to swallow, and wonders if Julia might be projecting their own shared past of childhood trauma onto this troubled boy. 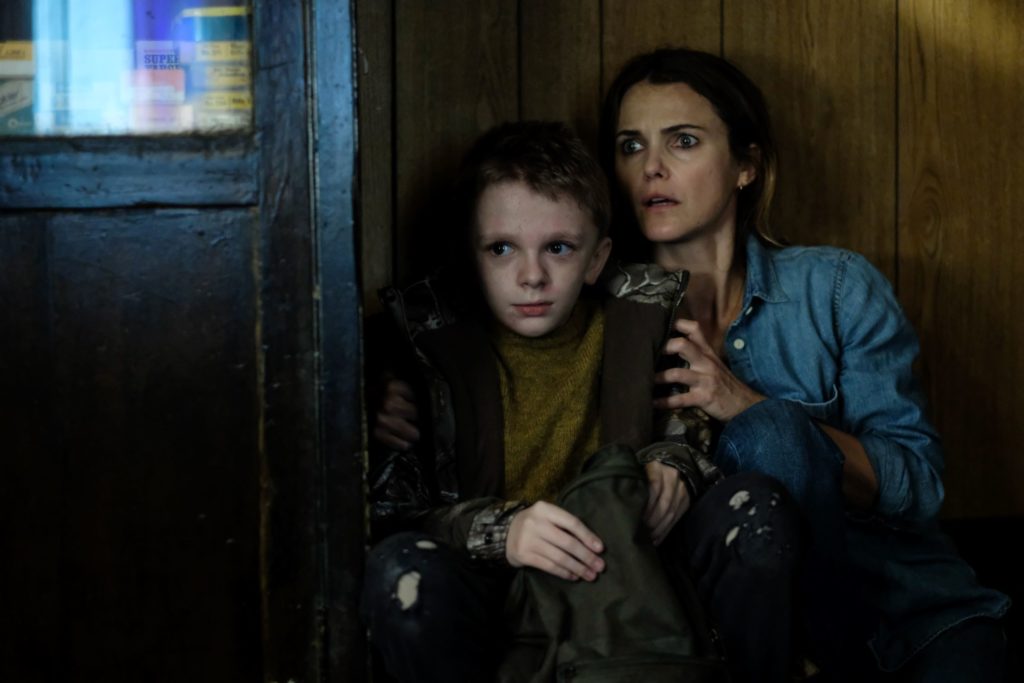 Taken on its own merits, Antlers is an effectively creepy little film. It sustains a sense of dread which permeates the entire film; for much of the first couple of acts, you don’t quite know what’s going on, but you know that it’s bad. The story is compelling, and its bits of Native American folklore place it well within the current vogue for “folk horror” (had it made its original release date of April 2020, it would have even been ahead of the curve). And it’s got easily one of the best horror ensembles of the year: Thomas gives a truly remarkable spooky-kid performance, Russell takes her role as seriously as any in her career, and Plemons in particular brings his trademark unpredictable energy to what could be a stock role (I strongly suspect that this will mark the last moment he falls into the “skeptical horror-movie town sheriff” price range).

But god, it’s just so bleak— and for reasons that go beyond the nominal horror. The central location (which I swear is actually called “Sisyphus Falls”) is a million post-industrial towns across the country, seemingly perpetually stuck in that just-rained, dead-leaves-stuck-to-the-ground malaise. This accurate depiction of small-town depression is commendable, but it’s also, well, depressing. I can think of exactly one moment in the film in which a character smiles, and that smile is used as a ruse to probe a suspected case of child abuse. I don’t need my horror movies to be full of yuks– Hereditary was one of my favorite films of the past decade, but even that monument of feel-bad cinema keeps you engaged with an undeniable off-kilter energy. Antlers, by contrast, drags the viewer from one dreary location to another, focusing on sad-eyed characters quietly processing various levels of grief and trauma. This is a film in which a scene of a horned monster descending from a tree to mutilate and devour a fourth grader comes as a welcome moment of catharsis. In short, if you’re looking for a fun horror movie to watch with your friends over the Halloween weekend, this might not be the film you’re looking for.

Antlers is based on a short story by Nick Antosca, the TV horror impresario behind Syfy’s brilliant-but-cancelled horror anthology series Channel Zero (a series which answers the question, “What if American Horror Story tried to be scary?”). I was a big fan of that show, which tackled similar emotional territory with an unpredictable, creepypasta-inspired pop surrealism. Unfortunately, director Scott Cooper (whose previous work includes the decidedly non-spooky Crazy Heart and Black Mass) takes a much more literal approach to the material. This may be a world of quasi-demonic possession and ancient revenge spirits, but it’s still very much the world we live in, which can’t help but feel like a letdown after the mindbending nightmare worlds of “Candle Cove” and “No End House.” There’s nothing wrong with realism; it’s just that I can see it anywhere, you know? 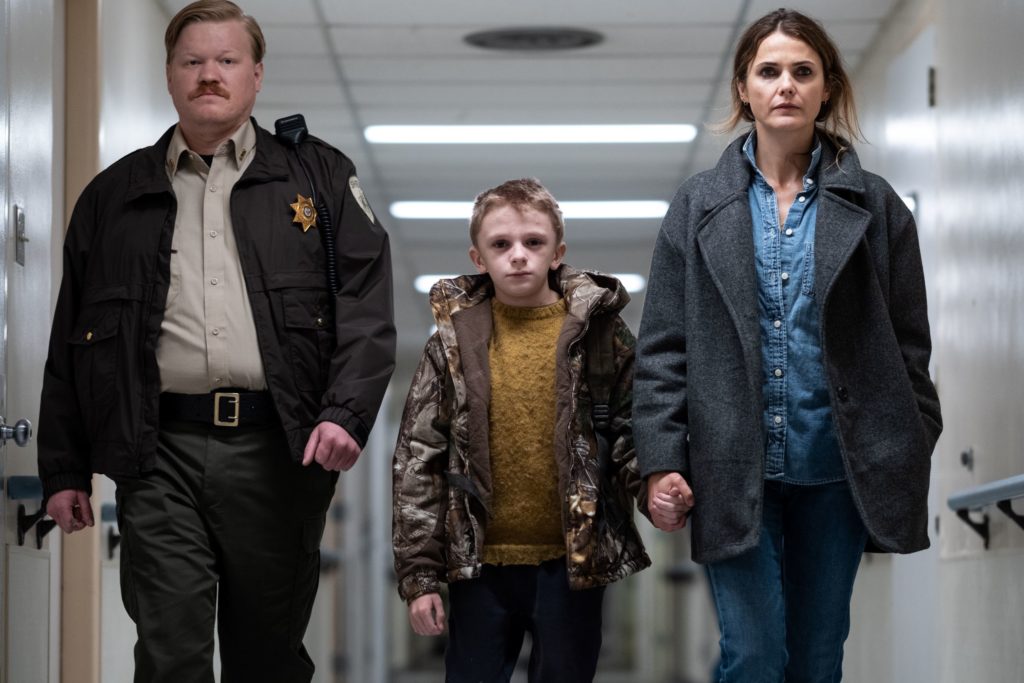 One area in which Antlers does excel is, well, the antlers. The creature design is suitably horrifying, but Cooper smartly withholds a full view of it until the final reel. Instead, for much of the film, he keeps it just out of frame, a mass of points and growls lurching into the side of the screen before a quick cutaway. It’s classic monster movie stuff, but it works, effectively building the critter into the sort of presence one can imagine haunting generations of lost souls. When we finally do see the monster, it is presented in an unnervingly straightforward full shot, with a couple of inspired points of reference to convey just how massive this thing is. If Antlers was a mid-season X-Files episode (which it somewhat resembles with its chilly British Columbia location shooting), this beastie might well have joined the ranks of the Flukeman and Eugene Toombs.

But alas, Antlers is a horror film released in the year of our lord 2021, right at the point where “elevated horror” is transitioning from an invigorating cinematic movement into a seen-one-seen-em-all studio commodity. Putting aside Last Night in Soho (which is a horror movie, but also a bunch of other things), this year’s two big Halloween horror releases are Antlers and Halloween Kills, two films which attempt to prove they’re more than “just” horror movies by adding on layers of trauma and grim pronouncements on the human condition. Which is great when it’s done well, of course, but can’t help but feel a little calculated as it becomes the genre’s dominant mode. The slasher films of the ‘80s were just as calculated, of course, but at least those were fun. With Antlers and its ilk flooding theaters, going to a horror movie on Halloween is starting to feel like a chore.