John Carpenter’s Halloween is, by any metric, a classic: a beloved, massively influential film whose masterful approach to suspense defined the grammar of horror cinema as we know it today. And, in a very real and fundamental way, it was a failure.

Something that’s often overlooked when discussing Halloween’s legacy is that Carpenter conceived it as a direct rebuttal to the ending of Psycho. This scene, in which a psychiatrist describes at length the pathology which led Norman Bates to homicide, was, to Carpenter’s mind, the antithesis of horror: he thought these acts of madness would be far scarier if the audience had no idea why the killer was committing them. In Michael Myers, Carpenter conceived a murderer closer to Lovecraft than Hitchcock, an implacable killing machine with absolutely no discernable psychology. His goal was to shift focus away from the killer himself and onto the horror he inspired in the film’s protagonists. This is why Myers wears a white, expressionless face, why he is credited simply as “The Shape,” why, when he is unmasked by Laurie Strode, he is revealed to be just some guy. We were never meant to care about Michael Myers as a character; he was meant to be the absence of a character.

If this was truly Carpenter’s goal, then one can only determine that he miscalculated catastrophically. Above perhaps all else, Halloween is remembered as “the Michael Myers movie,” and it kicked off a decade-plus run of horror films whose entire raison d’etre was the serial killers at their centers, turning characters like Jason Voorhees and Freddy Krueger into corporate mascots as instantly recognizable as Bugs Bunny or Mickey Mouse. And despite the fact that Carpenter never meant for Halloween to have a sequel (he wrote the screenplay to Halloween II under contractual duress and the influence of a six-pack), Myers has gone on to anchor an additional 11 films and counting, spanning a truly mind-boggling four different threads of continuity. The latest, Halloween Kills, is the third “number three” of the series (not counting Halloween III, which is famously its own thing), and while it has its moments, it once again hits up against the fact that it was simply never supposed to exist.

Halloween Kills picks up immediately where its predecessor, 2018’s maddeningly titled Halloween, left off, with Jamie Lee Curtis’ Laurie Strode being whisked to Haddonfield Memorial Hospital after trapping Michael in the basement of a burning house (for those keeping score, Halloween ‘18 disregards all previous films past the original, the upshot of which is that Michael and Laurie are no longer siblings). As I’m sure you don’t need me to tell you, Michael escapes, wasting little time in resuming his killing spree. Added to the mix this time is Laurie’s onetime babysitting charge Tommy Doyle (now played by an unrecognizable Anthony Michael Hall), a haunted man who spends his Halloweens with childhood playmate Lindsay Wallace (Kyle Richards, returning to the role from her Beverly Hills mansion) and an autograph table’s worth of series survivors. Upon hearing that the Boogeyman has returned to Haddonfield, Tommy vows to protect the woman who guarded him as a boy, rallying a mob of townsfolk with the chant “Evil dies tonight!” Will Tommy and his friends succeed, bringing Haddonfield’s long, terrifying Halloween to an end? (At the risk of spoilers, I should probably mention that Halloween Ends will hit theaters in October of 2022). 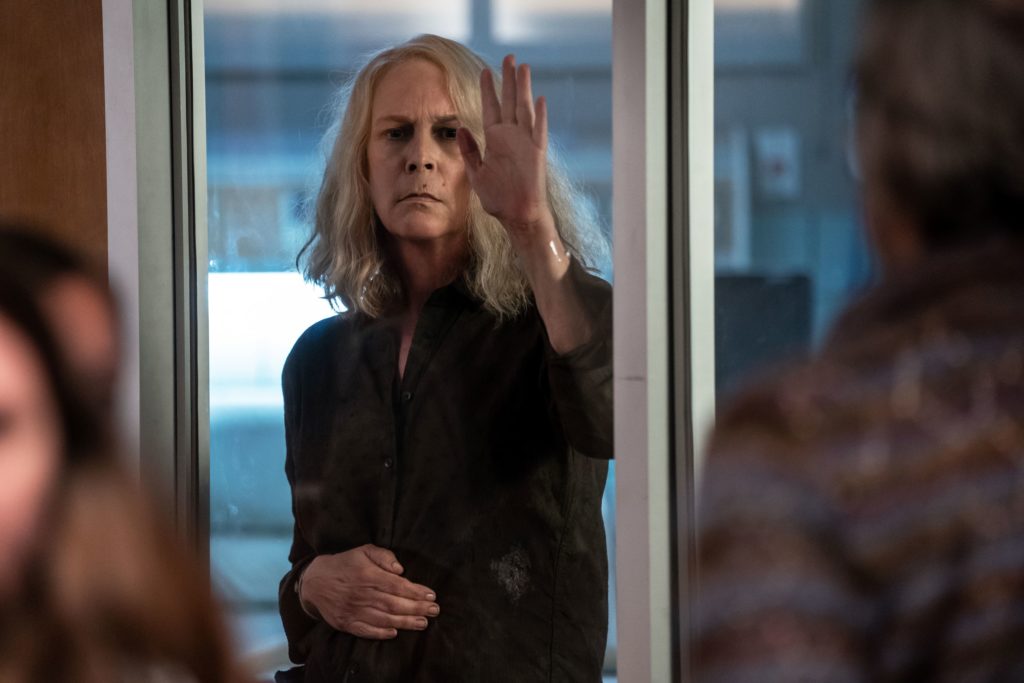 Halloween Kills draws a surprising amount of inspiration from the now-non-canonical Halloween II, up to and including the choice to confine Laurie Strode to a hospital bed for much of its running time. This was perhaps understandable in the earlier film– Curtis was by that time an ascendant Hollywood star, and already outgrowing her horror roots– but here it feels like an unforced error. Curtis’ soulful, lived-in performance was a major part of what made the 2018 film so refreshing, allowing her to explore her iconic character in a manner rare for the genre (and allowing audiences to visit with an old friend). The shift in focus to Tommy (and to Laurie’s daughter and granddaughter, played respectively by Judy Greer and Andi Matichak) simply doesn’t pack the same emotional punch because we don’t know them as well; we only met the younger Strodes the last go round, and Tommy was a little boy (and a different actor) the last time we saw him. Without Laurie serving as the emotional core, these supporting players threaten to become just another cast of slasher victims.

Which is possibly what led director David Gordon Green to take the film’s biggest swing– and its greatest misstep. When the film centers on Tommy and his impromptu militia, it largely stops being a slasher film at all, instead seemingly becoming a commentary on contemporary groupthink and politically motivated violence. I’m going to try to word this as carefully as I can, so as not to be lumped in with the “keep politics out of horror” crowd– horror is and has always been a potent vehicle for speaking social truths, and horror movies have been political since the dawn of cinema. But the fact is that Green’s stab (so to speak) at social commentary just doesn’t work. The mob justice scenes which take up most of the second act are more noisy and chaotic than scary, and ultimately serve as a distraction from the eternal struggle between Myers and Strode. As the film wears on through scene after scene of indistinct yelling, it becomes a chore to watch, and while I’m loath to slight a filmmaker for not taking the obvious route, I couldn’t shake the feeling that this wasn’t what I came for. 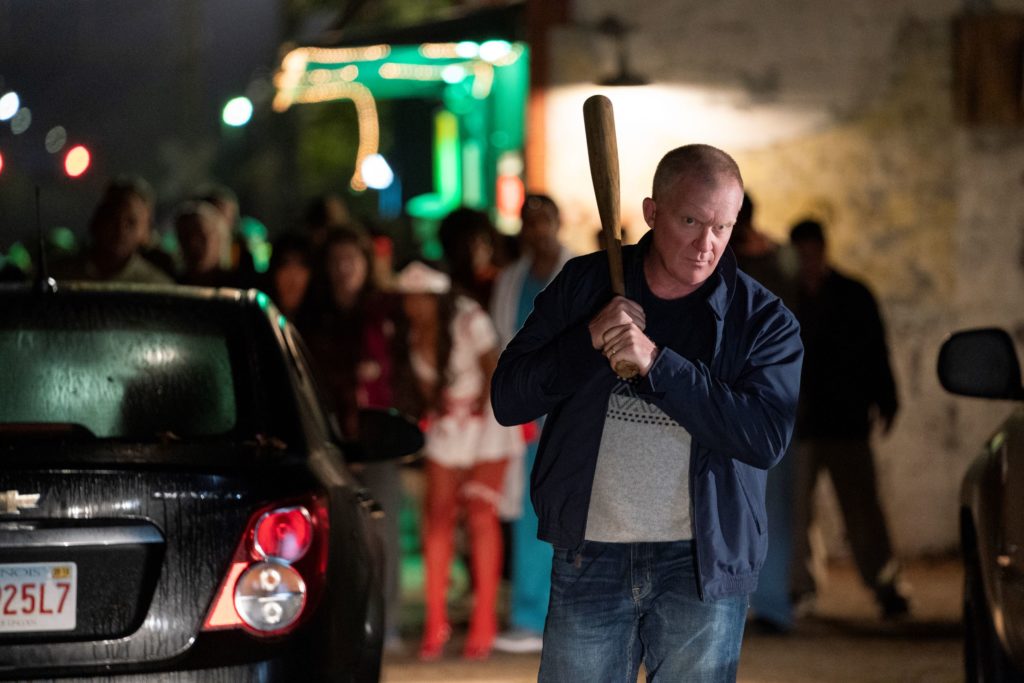 Which is a shame, because when Halloween Kills decides it wants to be a Halloween movie, it can actually be pretty fun. Amidst all the po-faced brooding, Green and co-writer Danny McBride channel their considerable comic sensibilities into the Haddonfielders who find themselves at the wrong end of Michael’s knife: the trio of mischievous trick-or-treaters wearing some familiar masks; the sassy, middle-aged gay couple currently occupying the Myers house; a pair of randy old-timers played by Diva Tyler and legendary Boston comic Lenny Clarke (the latter of whom might have previously been on my shortlist of people I never would have expected to turn up in a 2020s studio slasher). These scenes, which comparatively burst with energy and end with some impressively gooey kills, are the film’s best, and approach the devilish spirit of another seasonal classic: Michael Dougherty’s beloved 2007 anthology Trick ‘r Treat. They serve as a reminder of how much fun it can be to watch a good, dumb slasher movie around Halloween, and make one wish the entire film could embrace this abandon.

Unfortunately, the rest of the film is overly preoccupied with being real— which brings us back to the central dilemma of Michael Myers. Carpenter’s original killer was an abstraction who was perfectly designed to fit his spare, minimalist campfire story, but wasn’t built to last an entire series. Sequels force us to place undue scrutiny on a character who never made any rational sense (least of all now, when the in-universe Michael Myers is a remarkably spry 66-year-old). In its final moments, Halloween Kills attempts to reckon with this by reframing Michael as an evil-that-men-do Killer BOB figure, but it still can’t help but indulge in the sort of armchair psychoanalysis that Carpenter once bristled against. I suppose the filmmakers can be commended for trying to wring broader truths from the slasher film formula, but David Gordon Green is no Fritz Lang, and Halloween Kills is no M. In the end, Halloween Kills is a little like a box of raisins in your trick or treat bag: unpleasant, disappointing, and ultimately disposable.

In theaters and streaming on Peacock Friday, 10/15