This was common knowledge among horror fans. It was, after all, the one Halloween movie without iconic slasher Michael Meyers. And not even in the way Friday the 13th Part 5 introduced an ersatz Jason Voorhees—Halloween III was a completely unrelated movie, set outside the established Haddonfield canon. Hell, it wasn’t even a slasher movie—it was about an evil mask factory, for god’s sake. The only connection at all to the original—beyond the date and John Carpenter’s iconic theme—comes at the end, when protagonist Tom Atkins is forced to watch the first film as the villains carry out their evil scheme. Halloween III had no business being in the series, and was best left forgotten.

Then, three years ago, a funny thing happened. DVD reissue titans Shout! Factory chose Halloween III as the inaugural release of their Scream Factory imprint—essentially a Criterion Collection for VHS-era horror—prompting a new generation to look at the film through fresh eyes. Slowly but surely, the film crept up in esteem, looking less like an ill-conceived misfire and more like an overlooked gem of ‘80s horror lunacy. The trio of masks central to the plot have become a sort of secret handshake among the Fango set (check out the decorations at the Halloween dance in Adam Wingard’s The Guest), as has the maddeningly catchy jingle. At this point, the consensus seems to be that Halloween III is not only a worthwhile film, it might be the second best of the series. 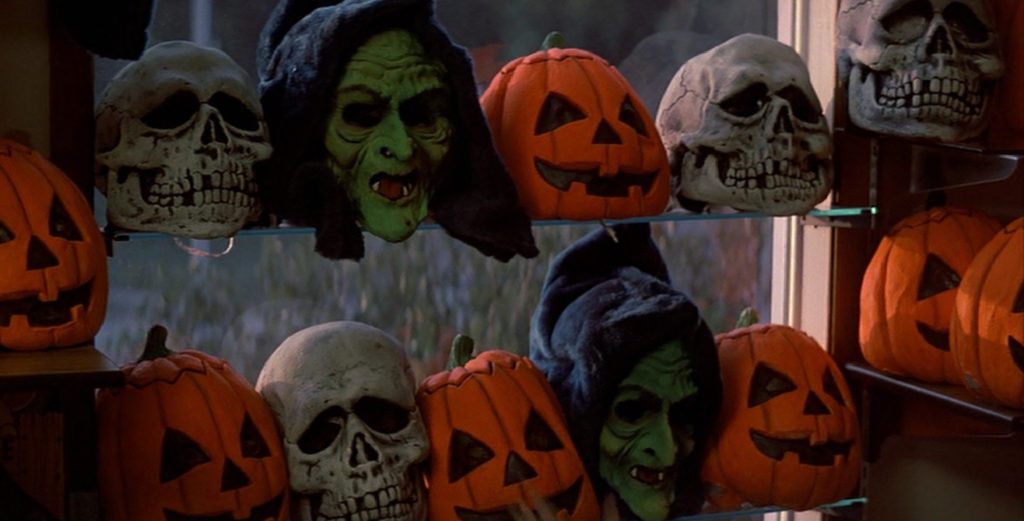 This may be thanks largely to the involvement of Carpenter himself, who, despite handing directorial duties over to Halloween production designer Tommy Lee Wallace, envisioned the film as a way to correct course on the industry he created. Carpenter was famously troubled by the wave of character-based slasher franchises he inadvertently spawned, and only wrote the screenplay to Halloween II under duress (and, purportedly, the influence of alcohol). Halloween III, then, was an attempt to re-envision the horror franchise; rather than return to the same well again and again, Halloween would become a yearly anthology of stories with no connective tissue beyond the titular holiday. It’s tantalizing to imagine what that series would have looked like, but it was not to be; horror fans voted with their wallets, and Michael was back in Halloween 4.

From today’s vantage point, however, the film’s standalone nature works to its advantage, as the Halloween series would proceed to become increasingly convoluted. Installments IV through VI picked up where Halloween II left off, explaining that original protagonist Laurie Strode had conveniently died in an accident in the interim. Halloween H2O served as a second mid-series reboot, ignoring all but the first film and bringing Laurie back for a curtain call (though she would die again in that movie’s successor, the half-baked Halloween: Resurrection). Rob Zombie gave the series a hard reboot in the late 2000s, reimagining the first film before taking it in an entirely new direction. And next year’s Halloween Returns promises to be a deboot, returning to the original continuity, but ignoring all entries but the first two. Now then: doesn’t a standalone movie about killer masks sound refreshing?