It’s easy to see why Edgar Wright and Quentin Tarantino are friends. Both are Gen-X film brats raised in the heyday of the video store, and both, more often than not, pilfer their favorite bits from their favorite movies and weave them into their own cinematic nests. But the differences in the way they pick and rearrange their influences is hugely illustrative of their respective MOs. Tarantino selects elements he thinks are cool: films like Kill Bill and Pulp Fiction are made up of the most “badass” scenes, characters, and soundtrack cues from the director’s favorite kung fu, film noir, and blaxploitation titles. Wright, however, focuses on things he thinks are neat. Wright’s influences in making Shaun of the Dead or Baby Driver are no less clear than Tarantino’s, but one doesn’t get the sense while watching them that he’s trying to fashion them into any sort of personal “image.” Rather, he’s simply including these references and homages because he loves them, and is giddy to fit them into his own work. In this way, Wright is perhaps more comparable to Mel Brooks, whose best parodies are clearly rooted in deep affection for the genre at hand. Wright is excited about his influences, and wants you to be too.

Wright’s latest feature is Last Night in Soho, his follow-up (give or take a documentary detour) to the surprise smash success of 2017’s Baby Driver. This time around, Wright mixes together a number of diverse influences– splashy ‘60s show-biz movies, lurid ‘70s giallo thrillers, a dash of contemporary teen-pop– and attacks them with the verve and confidence of a filmmaker with a bonafide hit under his belt. As with its predecessor, the style on display here is perhaps more impressive than the substance, but it remains one of the most dazzling and entertaining films of the year. 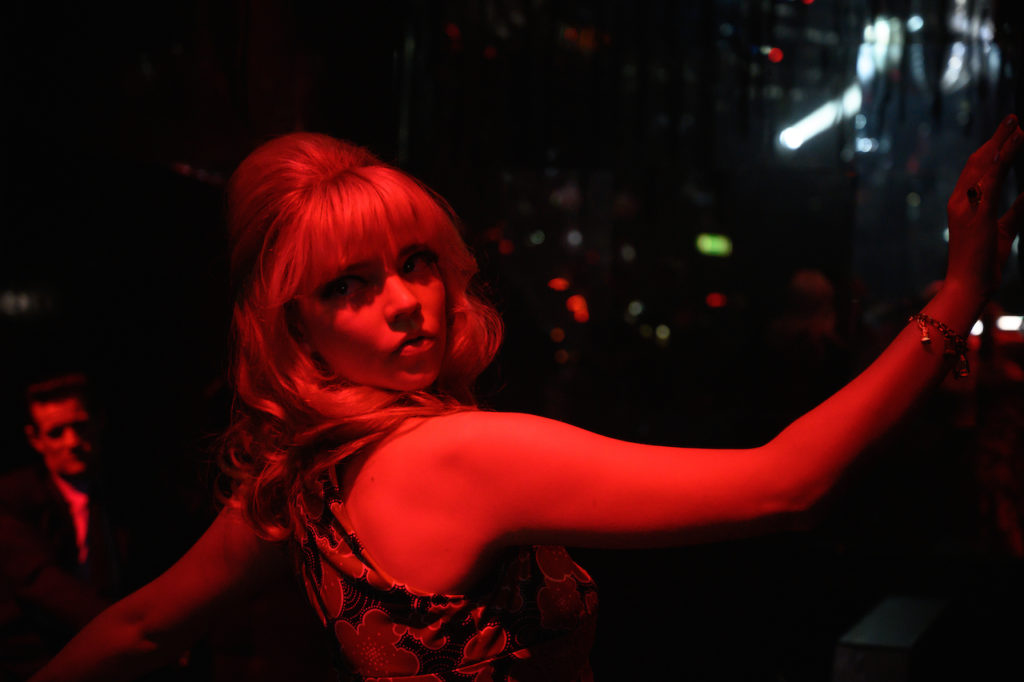 Soho stars Thomasin McKenzie as Eloise Turner, a starry-eyed girl from Cornwall traveling to London for her freshman year of fashion school. Eloise has dreams of becoming a retro-inspired designer, but quickly becomes disillusioned by the chicer-than-thou mean girls who populate her dorm. Desperate to escape with her dreams and ego intact, Eloise flees, renting a modest flat from the kindly Ms. Collins (the late Dame Diana Rigg, in her final film role). However, Eloise finds that her new digs have an even stranger effect on her: at night, she finds herself subject to vivid dreams, viewing the London of the swingin’ ‘60s through the doe-eyes of an aspiring chanteuse named Sandie (Anya Taylor-Joy). At first, Eloise is enchanted, dancing vicariously by night with be-pompadoured lothario Jack (Matt Smith) and drawing inspiration by day for her designs. But as the nights wear on, Eloise’s visions grow darker, and she begins to suspect they’re more than mere dreams. Then there’s the matter of the sinister old man (professional sinister old man Terence Stamp), who seems to be waiting for her around every corner with an apparent connection to her imagined past. As the lines between fantasy and reality blur, Eloise becomes determined to get to the bottom of whatever happened to Sandie– or go mad trying.

Edgar Wright is perhaps the greatest musical director working today who has never actually directed a musical. Each film in his beloved Cornetto Trilogy has an innate musical sensibility, with gags timed out in metronomic precision. His work since then takes this approach even further. Scott Pilgrim and Baby Driver are fairly explicitly structured like musicals, their showstopping fight sequences and chase scenes (respectively) taking the place of musical numbers. Last Night in Soho still isn’t quite a musical– the songs are all either played on records or performed on stage– but it’s perhaps his closest yet. The dance sequences in the first half of the film are nothing short of rapturous, with Taylor-Joy and McKenzie seamlessly tapping in and out as they cut a rug in one swanky nightclub after another. Later, as Sandie descends to the town’s seamier side, these sequences grow darker, more phantasmagoria than fantasia– a sort of act-long dream ballet. The whole thing is set to a wall-to-wall soundtrack of British Invasion nuggets– not the crisp, white-boy R&B we often think of today, but the swooningly dramatic orchestral sound of Petula Clark and Dusty Springfield, the Walker Brothers and Cilla Black. Time will tell whether Wright has an earnest musical up his sleeve, but it’s tough to complain when he keeps compiling such stellar mixtapes. 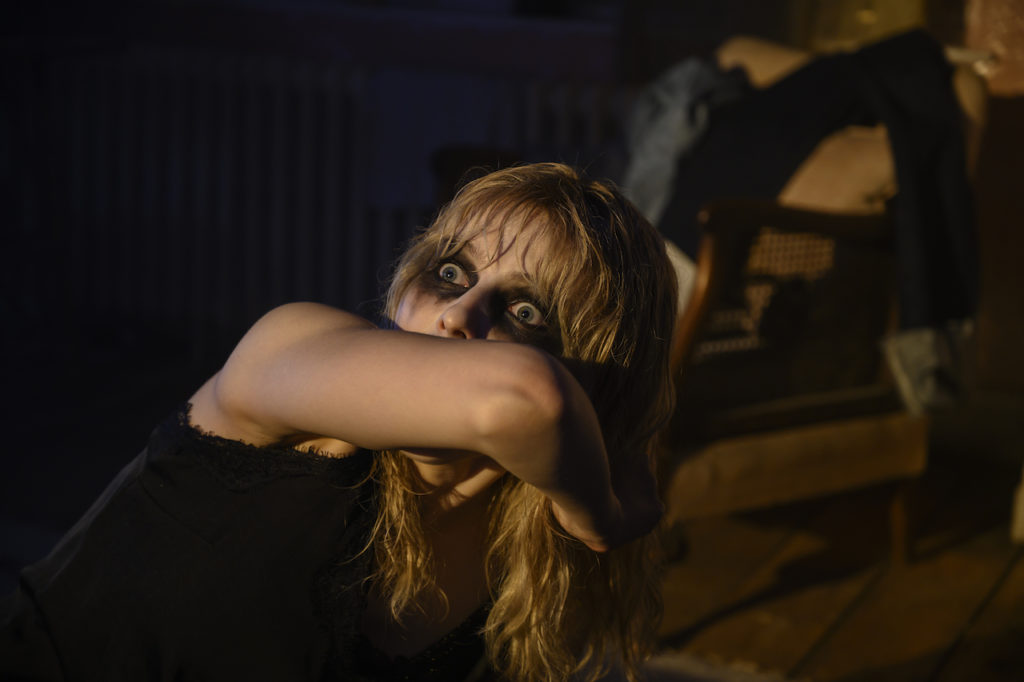 But while Wright’s musical sensibility is unmistakable, his tempo has subtly shifted. Gone, for the most part, are the whip-pans and smash-cuts which have up until now defined his work, replaced with luxurious steadicam shots and blink-and-you-miss-it transitions. It’s also perhaps the first of his films which I would not classify first and foremost as a comedy (Baby Driver works best when you take its characters as archetypal satires, and even The Sparks Brothers is about as funny as a talking-head music documentary can be). But while Wright’s rapid-fire jokes have been placed on the back burner, his wit remains obvious: consider the Argento-inspired neon lights which flood Eloise’s flat, justified in-universe by the red-white-and-blue-flashing sign of the French restaurant next door. What this is, ultimately, is a filmmaker stretching his legs, running amok with the studio resources afforded to him after his first unequivocal box office success. The result is his most unclassifiable pastiche yet, running through maybe half a dozen discrete genres by the time the credits roll.

This newfound ambition at times threatens to get the better of Wright. Like many of the technicolor extravaganzas that inspired it, it runs maybe twenty minutes longer than it needs to, and like Baby Driver it flags a bit in the homestretch when the plot is forced to catch up with the theatrics. One could also argue that this story, which eventually takes shape as an indictment of institutional rape culture, isn’t quite suited to a director as ebullient as Wright (the ending in particular is perhaps too pat by half, and tries to have things a few different ways). But, as with M. Night Shyamalan, I’m willing to forgive a lot by virtue of the sheer level of personality on display. In a cinematic landscape choked with soulless, 150-minute IP extensions, Wright is one of a handful of filmmakers given free reign to make weird, distinctive movies on a moderately sized budget. Even if not everything lands, it’s a delight to see something this colorful and weird and original land in multiplexes (not to mention to see Rigg one last time, in a final role worthy of the icon). As I left the theater into the rain-slicked city streets, the eponymous song by Dave Dee, Dozy, Beaky, Mick & Tich echoing in my head, I felt invigorated, and I’d almost forgotten how much I missed that particular rush.