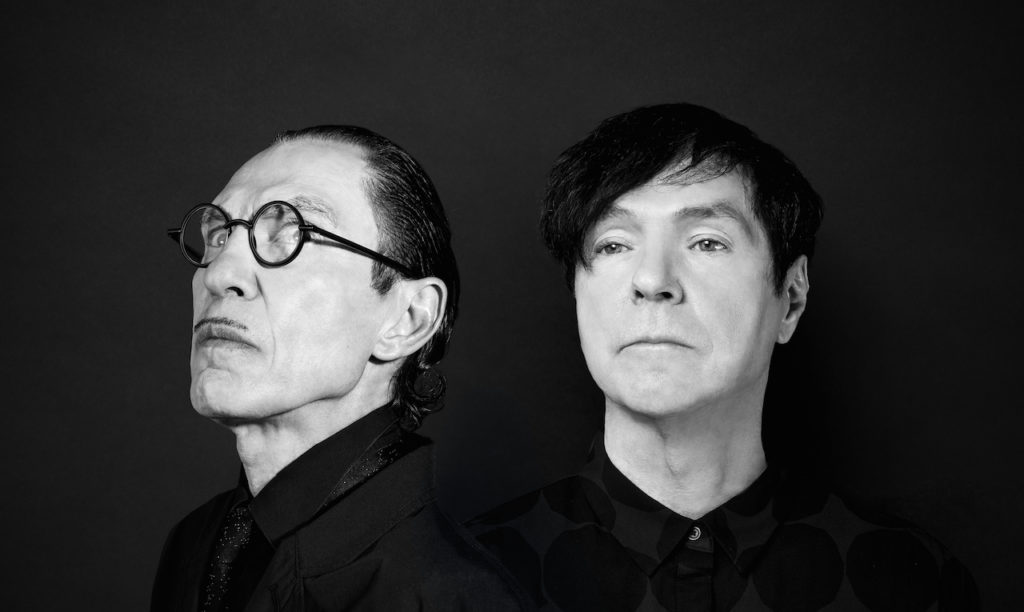 As I’ve mentioned in this space before, I spent the better part of a decade behind the counter of Harvard Square’s venerable Planet Records. To say I miss it would be an understatement; to be able to spend one’s days surrounded by like-minded individuals and thousands upon thousands of albums beloved and obscure is pretty much the young adult dream. I miss the thrill of pawing through customers’ collections, the idle conversations with co-workers (Serge Gainsbourg or Lee Hazlewood? Best punk song about television?), and even the oft-deranged regulars who would loiter around the dollar bin. But perhaps the thing I miss the most about my days in the record store trenches is the satisfaction of recommending the perfect record to a curious customer. To connect a budding music fan with their new favorite album is to do the lord’s work, and, for an inveterate disc-digger like myself, there are few greater joys than turning someone else onto an album that it feels like I’m the only one who’s heard. Not coincidentally, this is also one of the principal pleasures of film criticism.

There are few more quintessential record-store-secret-handshake bands than Sparks. Long before I worked in a record store myself, they were recommended to me by a sympathetic Newbury Comics employee, who sold me on the band’s seminal 1974 album Kimono My House with the irresistible logline, “They’re like Queen, but less ‘leather bar’ gay and more ‘Oscar Wilde’ gay.” We didn’t always have a lot of Sparks in the store– those who own their records rarely sell them, and those looking to buy rarely allow them to collect dust– but when we did, I would make a point of keeping them in regular rotation on the in-store CD player. Every once in a while, an unsuspecting customer would ask what they were hearing, at which point I would go in for the kill, breathlessly describing this nearly indescribable little band. More often than not, the customer would leave with the album, and I’d have to find something new to play.

So who are Sparks? That’s a tricky question, and the subject of Edgar Wright’s giddy new rockumentary The Sparks Brothers. Through archival materials, fan testimonials, animation, and rare (mostly) candid interviews with the band members themselves, Wright has created the most comprehensive Sparks document to date– at least, so far. 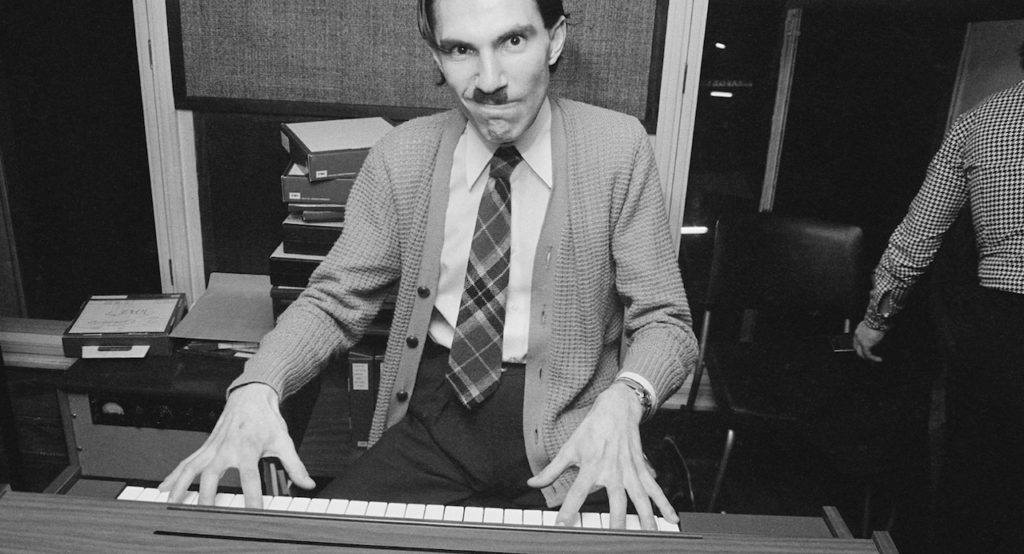 The tale of Sparks is long and convoluted (as evidenced by the film’s two-hour-plus running time), but, in essence, it’s the story of brothers Ron and Russell Mael. Most commonly associated with the UK glam rock scene (though the brothers themselves hail from California), the group was initially renowned for their unique visual style as much as anything else. Russell, the singer, looked every bit the Bolanesque rock god, but carried himself with a peculiar intensity, eschewing traditional swagger for a piercing gaze and herky-jerky movements. Ron, meanwhile, would be perched behind the organ, usually wearing a sweater-vest or something similarly square, with a Keatonesque stoneface and a, uh, disquietingly trimmed mustache (in a famous, probably apocryphal anecdote, John Lennon tuned in to the band’s performance on Top of the Pops and exclaimed, “They’ve got Hitler on the telly!”). The Maels’ sartorial sense found a counterpart in Ron’s lyrics, which packed hyperliterate wordplay and surprisingly involved narratives into the confines of a tight pop structure (A sample couplet, from the first few seconds of “Achoo”: “Who knows what the wind’s gonna bring when the invalids sing ‘tra-la’s’ with a powerful sting that can stop any opera or any Bing?”).

But while the band’s look and sensibility remained constant, their music was anything but. The Mael brothers started in an American power-pop outfit called Halfnelson (under the tutelage of elfin pop-savant Todd Rundgren) before moving to England and rebranding to their more famous moniker. When the glam bubble burst in the late ‘70s, the band hooked up with legendary Italo-disco producer Giorgio Moroder for Number One in Heaven, a startlingly modern album of synth-heavy dance pop. When sales continued to dwindle, the Maels returned to the states, recruited members of the similarly off-kilter Gleaming Spires as a rhythm section, and adapted to the newly formed new wave landscape of the ‘80s. In the ‘90s, the group pivoted to technopop, before making a dramatic about-face with 2000’s Steve Reich-influenced Lil’ Beethoven. And so their story has continued, with the Mael brothers reconfiguring their theatrical brand of outsider pop every few years in increasingly surprising ways– and no sign, at press time, of slowing down.

Even if you’re unfamiliar with Sparks, you can probably gather by now why such a band would be catnip to obsessive record collectors, a demographic to which Edgar Wright demonstrably belongs. In The Sparks Brothers, Wright takes the role of the clerk with a stack of records that you absolutely have to hear. Wright’s approach is exhaustive, and could have easily crossed the line into exhausting: because the band’s approach evolved incrementally from record to record, each of the band’s 25 albums is given a moment (or two) in the spotlight. Yet despite the film’s sprawling length and granular approach, it’s never a slog to sit through; I misread the film’s running time prior to watching it at this year’s virtual Sundance, and when it was over I was genuinely puzzled at how it got to be so late. Wright’s enthusiasm is matched by his eclectic array of interview subjects, ranging from Beck and Björk to Neil Gaiman and “Weird Al” Yankovic. With every testimonial, you get the sense that the subject is thrilled to talk about a band which they love, but which rarely if ever comes up in casual conversation. Lord knows I’ve been there. 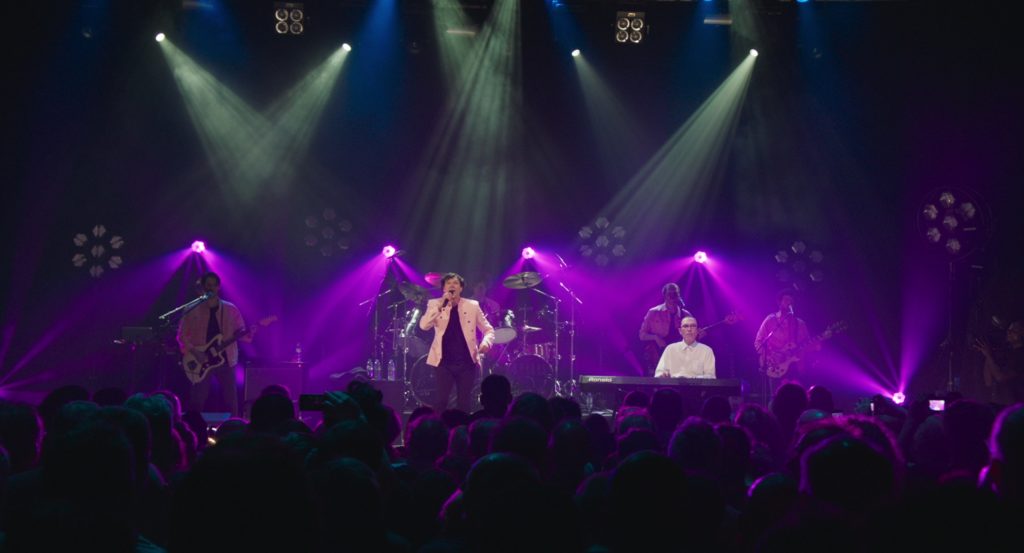 But the heart of the film, as it should be, is the Mael brothers themselves. As with any band with a theatrical streak, it is sometimes difficult to tell where the act ends and the honesty begins (I’m reminded of the Residents documentary Theory of Obscurity, which leaves one with the unique question of whether or not the band members were interviewed at all). To be sure, Ron and Russell Mael are decidedly arch, and a number of their answers are clearly pulled out of their back pockets. But I was truly surprised at the extent to which the brothers open up to Wright’s cameras. Watching The Sparks Brothers, one gets the sense that the band’s constant evolution stems from a sense of frustration– that if not enough people bought the last album, it must be time to pull up stakes, swap out the backing band, and try a new genre. It’s clear that the Maels have felt particularly wounded by some of their critical or commercial failures (in particular, a never-materialized early ‘90s movie musical collaboration with Tim Burton appears to be a sore subject), and Wright’s editing illuminates the fact that many of their seemingly aloof lyrics mask genuine heartache.

But all that makes The Sparks Brothers sound much more melancholy than it is. This is, first and foremost, a celebration of the thrill of making music, and of listening to music, and of discovering music. Wright has compiled a truly astounding array of material, ranging from the band’s TV performances and proto-music videos to never-before-seen home movie footage (I was particularly bowled over by a vintage TV performance by the Beatles, with a freeze-frame on a teenage Ron and Russell in the audience). This is obviously a treasure trove for any Sparks fan past or present, but, more importantly, it does a phenomenal job of drawing in new ones. One of my great joys these past few months has been watching more and more people on my Twitter feed suddenly become obsessive Sparks devotees as the film has made its way around the festival circuit. (And they could scarcely ask for a better time to hop on the bandwagon: the band’s next project, the original movie musical Annette, directed by Leos Carax and starring Adam Driver and Marion Cotillard, looks to be the most ambitious undertaking of their career). My only advice is to keep a notepad handy– you’ll want to update your want list before your next trip to the record store.