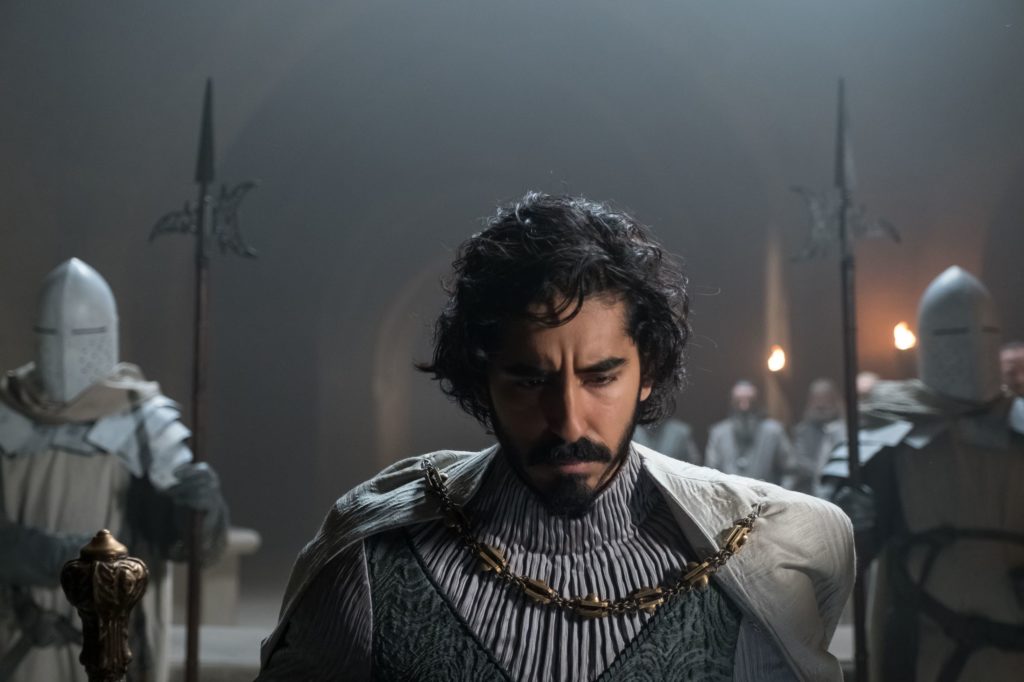 When I was a kid, I was a sucker for medieval stuff; I loved tromping around the woods with whatever I could reasonably pretend was a sword, and spent many a weekend at Higgins’ Armory (R.I.P.). Yet, perhaps strangely, I was never what you’d call a “fantasy kid.” Though I loved The Hobbit, I never felt compelled to take the full Tolkien dive, and I resisted the immersive temptations of Dungeons and Dragons. The issue, I think, is that I never particularly cared for the lore of high fantasy so much as the aesthetic. I loved Robin Hood and Merlin and knights and (especially) monsters, but I primarily thought of them as a sandbox in which to play. When it came to the heavy mythology nitty-gritty that tends to make the hardcore nerds salivate, it kind of started to feel like homework.

The Green Knight, the highly anticipated new film by David Lowery, is absolutely not a film for children, but it awakened within me the sense of wonder I used to get while paging through picture books of legendary creatures. Though based on an epic poem dating to the 13th century, it never feels like an “epic” in the portentous, Lord of the Rings sense of the word. Rather, this is a film in love with the dark, occult weirdness of medieval folklore. It’s one of the most dazzlingly strange films I’ve seen in ages, and one of my favorites of the year so far.

Dev Patel stars as Gawain (which, I was surprised to learn, is pronounced closer to GAR-win than Ga-WAYNE), the roustabout nephew of an aged King Arthur (Sean Harris). On Christmas, as Gawain finally takes his rightful place at his uncle’s side at the Round Table, the Yuletide festivities are interrupted by an unexpected guest: the legendary Green Knight (The Witch’s Ralph Ineson, unrecognizable under heavy mo-cap), a leafy, ent-like creature who challenges Gawain to a “game.” If Gawain can land a blow, he gets to carry the knight’s fearsome axe, but must journey to the Green Knight’s lair one year later to have the blow returned in kind. Gawain, not knowing his own strength, lops his mossy adversary’s head clean off his shoulders. The Green Knight calmly collects his head and leaves, and Gawain’s triumph is tempered by the knowledge of what awaits him the following Christmas. Along the now-Sir Gawain’s grim trek to the Green Chapel, he encounters a young woman (Erin Kellyman) with a strange request, a boisterous huntsman and his seductive lady (Joel Edgerton and Alicia Vikander, the latter in a dual role as Gawain’s love back home), and a peculiarly attentive fox, as well as a handful of sights which defy description. 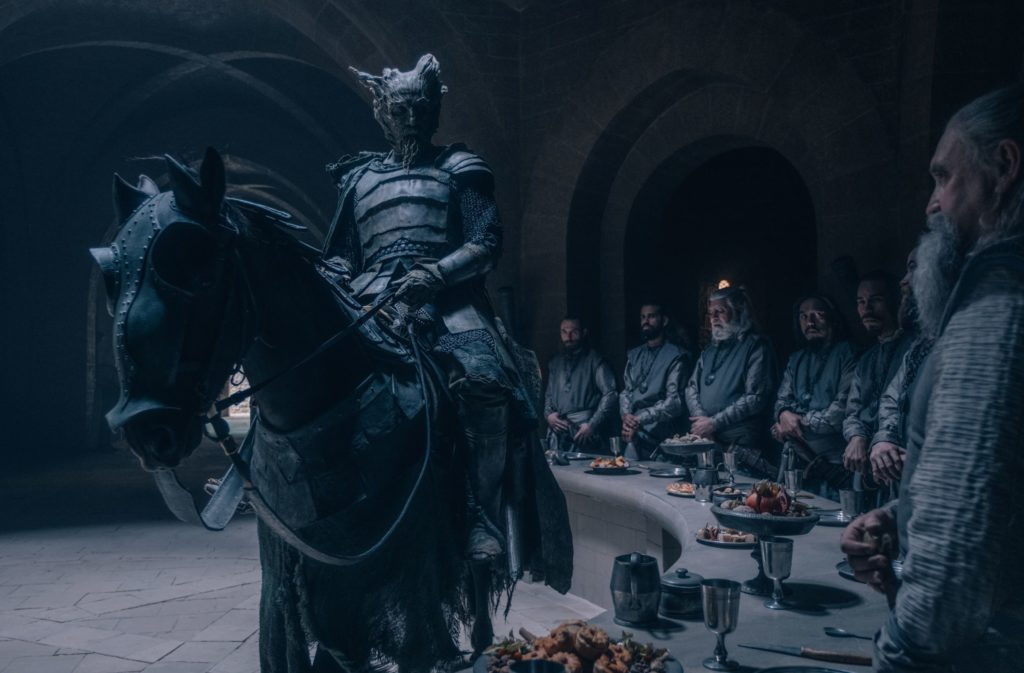 What I love about The Green Knight is the way it embraces the haunted, pagan undercurrents that run through so much medieval literature. The sword-and-sorcery genre, at least in the decades since the publication of Lord of the Rings, has by and large settled into a set of visual tropes exemplified by paperback covers and die-cast RPG figurines– call it Frazettaesthetics. Lowery, on the other hand, draws his inspiration for the uncannily strange illustrations that tend to accompany pre-Renaissance texts. I’m no historical scholar, but I’ve done my share of amateur research into forteana, and Lowery’s visuals raise the same eerie hackles as scans of the Voynich Manuscript or images of the woodwose. The production design is gorgeously tactile, and evokes the sense that you’re laying eyes on objects that have gone unseen for centuries.

In the weeks leading up to The Green Knight’s release, I noticed some mentions of the film as “slow” or “meditative.” I don’t think this is accurate. While it is true that the film does not careen from plot point to plot point with the algorithmic, Save the Cat efficiency of most modern blockbusters, this is not a film where things stop happening. Rather, Lowery breaks the story into a series of episodes, and allows each one the time it needs for maximum impact. The original epic poem, it seems, largely skips over the individual events of Sir Gawain’s journey, merely stating that there were battles and adventures between Camelot and the Green Chapel. Lowery fills in the gaps with bits of folklore, apocrypha, and the old, weird Christianity, creating something we haven’t really seen before. You may need footnotes to know exactly what’s going on, but I can’t imagine you’ll be bored.

Watching The Green Knight, I was reminded of a perhaps counterintuitive influence: the fantasy films of stop-motion effects wizard Ray Harryhausen. To be sure, the darkness here is a far cry from the whiz-bang adventurism of those family-friendly classics, but they share a certain otherworldly quality. The towering Green Knight shares a good deal of DNA with the creaky bronze giant of Jason and the Argonauts, and the scene-stealing CGI fox might even call to mind Clash of the Titans’ mechanical owl Bubo. Moreover, both Harryhausen and Lowery share a true sense of wonder; when we see Gawain enter a new realm, there is a giddy thrill to see what new perils he will encounter, just as there was in the Sinbad films of yore. Both filmmakers seem determined to show you something you’ve never seen before, and Lowery succeeds on that count just as much as his forebear. 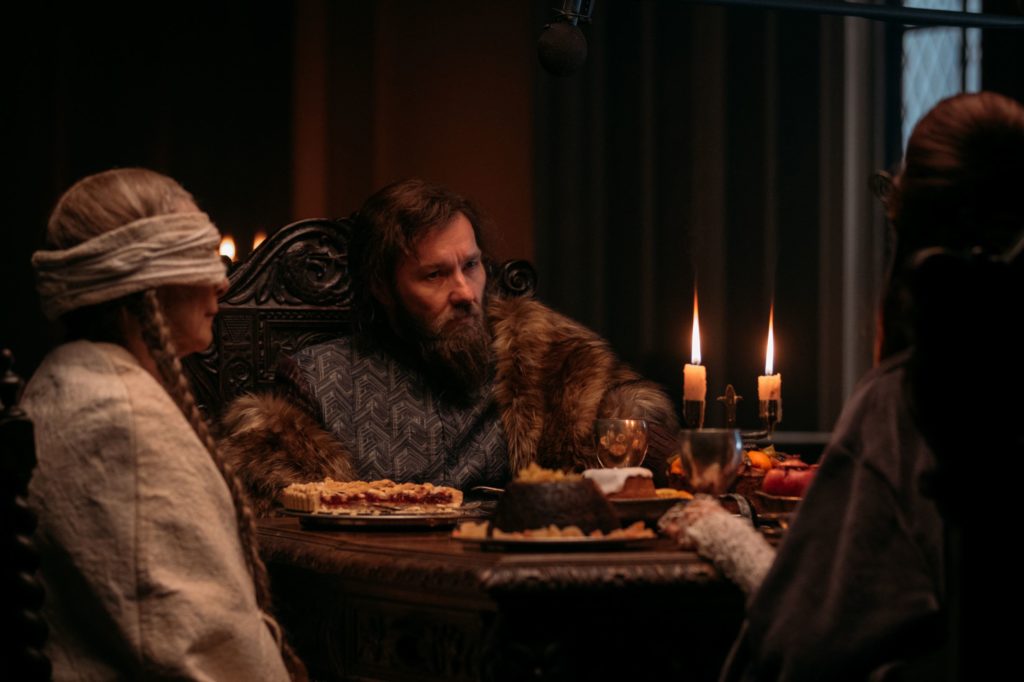 Of course, unlike the Harryhausen epics, you’d probably get in trouble dropping your kids off at a matinee of The Green Knight. The wonder here is tempered with the dark psychedelia of the Incredible String Band, or the first couple of Black Sabbath albums. “Folk horror” is having a bit of a moment this year, and while I’m not sure I’d quite classify The Green Knight as a horror movie, it certainly includes enough horrific imagery to get under your skin. This is a film with no shortage of decapitations and fetid skeletons, but it’s also a film of striking, often beautiful imagery– frequently at the same time. In one of the film’s most indelible moments, Sir Gawain encounters a tribe of bald and mute giants milling about the misty peaks of Avalon. These giants, in their inscrutability, are both beautiful and terrifying. They are not explained, nor do they return, but they represent the strange wonder at the heart of this story.

Will The Green Knight turn out to be the blockbuster of this strangely liminal summer? Probably not; this is an A24 film, after all, and moviegoers looking for something along the lines of Game of Thrones will likely leave perplexed, particularly by the film’s enigmatic third act (in these scenes, Lowery seems to be directly referencing another classic revisionist epic, though it would probably constitute a spoiler to name it here). But this is also an undeniably entertaining film, and while I’m loath to include a word like “badass” in a serious review, there are few other words to describe a film in which a tree-man taunts his enemies by waving his own laughing, severed head. In a word where the shackles of “lore” and “canon” bind everything from superhero movies to Ghostbusters, The Green Knight is gloriously, refreshingly free. It might not be standard “nerd” fare, but for weird, spooky kids who prefer monsters to chivalry, it will be catnip.

Opens Friday, 7/30 at Coolidge Corner Theatre (and pretty much everywhere else)