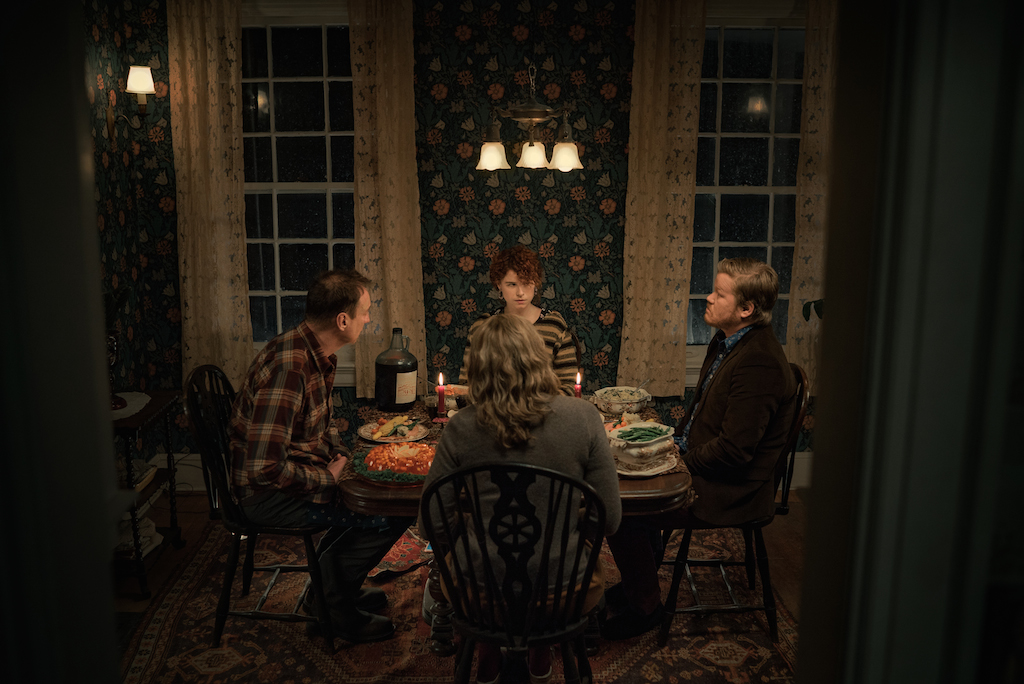 Charlie Kaufman, you son of a bitch.

Over the summer, Kaufman, the legendarily eccentric screenwriter behind such indie staples as Being John Malkovich and Eternal Sunshine of the Spotless Mind, published his first novel. That book, Antkind, is a sprawling, scorchingly funny doorstop of a book, lampooning American culture in general and the academic, white, male ego in particular– think Pynchon for the Twitter age. And it puts me in a hell of a bind. Antkind’s protagonist, you see, is a film critic– the hysterically pompous and neurotic B. Rosenberger Rosenberg– and is clearly a manifestation of Kaufman’s frustrations with those in the field. As I write this, I’m about halfway through Antkind, and, as the kids say, I feel seen. Kaufman’s prose is a lacerating sendup of the sort of flowery indulgences that critics– myself included– can’t help but occasionally fall prey to. Now, with the release of Kaufman’s latest film, I’m Thinking of Ending Things, I am faced with a conundrum: how does one unself-consciously review a film– particularly one as dense as Kaufman’s– with the voice of B. Rosenberg Rosenberger rattling around in their heads.

Make no mistake: Charlie Kaufman knows exactly what he’s doing. This is psyops.

This is the part of the review where I describe the plot of the film, but, as anyone familiar with Kaufman’s work will tell you, that’s pretty much a fool’s errand. Nevertheless, the facts of the case. Lucy (Jessie Buckley) embarks upon a wintery road trip with her boyfriend, Jake (Jesse Plemons), to meet his parents at their family farm. Jake’s a nice enough guy, but as we learn from her interior monologue, Lucy is dissatisfied, and considering breaking off their relationship in the near future. Arriving at the homestead, the couple meet Jake’s loopy parents (Toni Collette and David Thewlis) and sit down for an awkward dinner for the ages. From the outset, however, things seem a little… off. Characters offhandedly drop seemingly contradictory biographical details– little things at first, which gradually become more noticeable. Then Lucy, in her impatience to get home before the snow picks back up, finds the farmhouse turning into a labyrinth, and starts to see Jakes’ parents age and de-age before her eyes. Then there are the seemingly random cutaways to an elderly custodian, mopping the halls outside a high school production of Oklahoma! As you can probably imagine, there’s more to the story than I can reveal; as you can probably imagine as well, there’s plenty that I couldn’t describe if I wanted to. 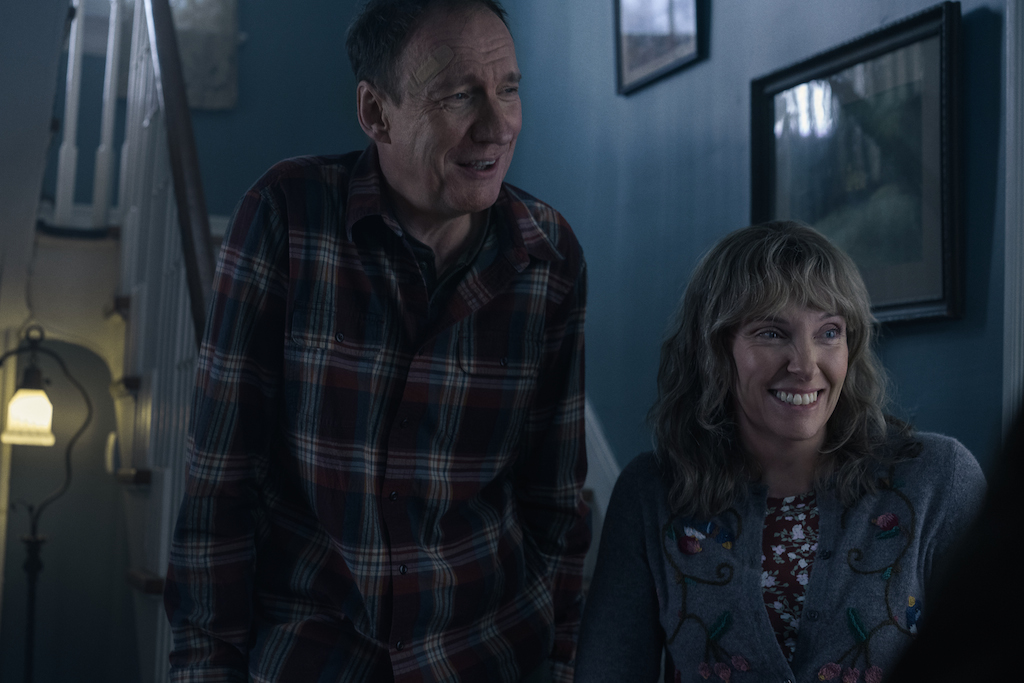 This is the sort of film that lives and dies by its performances, and the cast here is uniformly excellent. Jessie Buckley has one of the most fascinating faces in Hollywood; her dark eyes and sideways smirk effortlessly project both fear and bemusement, whether from nuclear annihilation or simply the world’s worst job. She is also able to spit out reams of dialogue with equal parts pain and humor, and here gets several absolute show-stoppers. In short, there may not be another actor alive better suited to play the lead in a Charlie Kaufman film. Collette and Thewlis are fantastic as always, both given free range to push both their intensity and their considerable comic chops to the limit. And Plemons is so convincing as the schlubby boyfriend that he’s honestly kind of difficult to watch. Even without Lucy’s narration, you’d be able to tell in five minutes that their relationship is doomed; the guy’s clearly doing everything he can, but “everything he can” simply isn’t that much.

And it should go without saying, but Charlie Kaufman’s brain is one of the true wonders of the modern world. The word “dreamlike” has been applied to filmmakers from Melies to Lynch, but I can’t think of any who so fully capture the actual sensation of dreaming. Most dreams aren’t the surreal mini-narratives we see in movies; instead, they’re usually a series of contradictory moments and facts and scenes that our brains have to splice together on the fly. As in a dream, Kaufman’s characters shift and blend into one another, doors lead to nowhere or to an entirely different locale, and tasks as simple as getting to the car or throwing out a milkshake become a herculean effort. And like most of Kaufman’s films, there are enough brilliantly left-field ideas on display here to stock an entire film festival: characters break into an Agnes de Mille-inspired dream ballet; Plemons meets an animated, talking pig voiced by Oliver Platt; Buckley spontaneously launches into a pitch-perfect reading of Pauline Kael’s review of A Woman Under the Influence, complete with cigarette (again with the critic-baiting!). The past couple of decades have seen a number of cutesy pretenders to Kaufman’s throne, but there’s simply no mistaking the real thing. 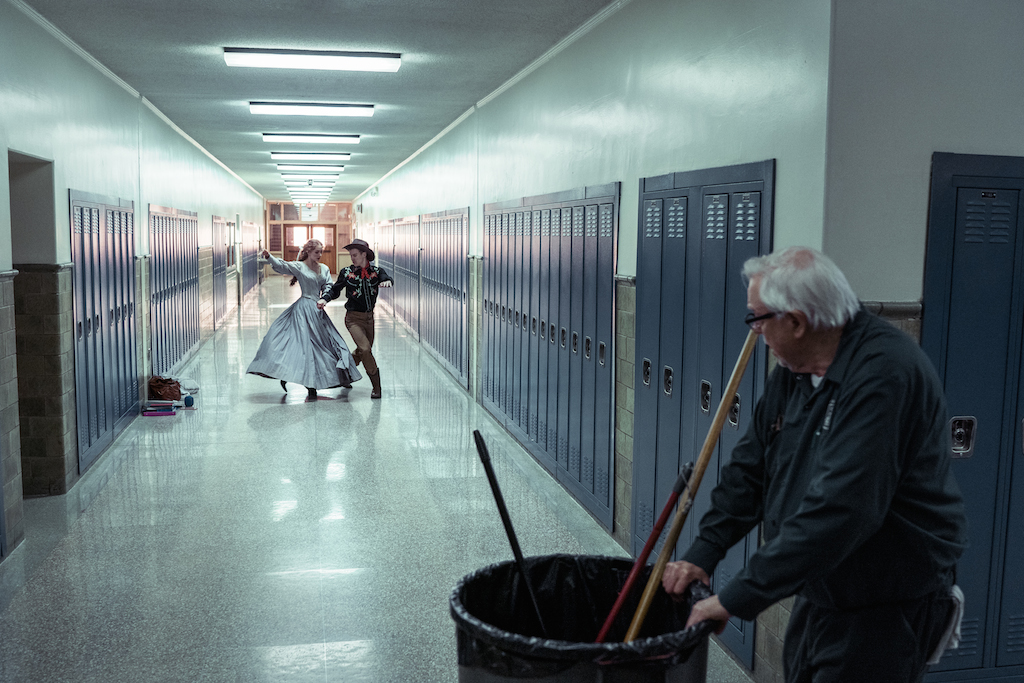 Yet there’s something undeniably showy about Kaufman’s writerly gymnastics, something just a little too see-what-I-did there. Like most people of my age and inclination, I have a deeply felt soft spot for Being John Malkovich, Adaptation, and Eternal Sunshine of the Spotless Mind, the trio of films that put Kaufman on the map as that rarest of beasts, the celebrity screenwriter (Eternal Sunshine came out during my freshman year in film school; I saw it three times, in three different theaters, with three different groups of friends). But I was left cold by his directorial debut, Synecdoche, New York, a film seemingly designed to reveal itself on repeated viewings, yet so intellectually oppressive and emotionally exhausting that I can’t imagine ever being in a mental place where I want to watch it again. At the time, I took this to indicate that Kaufman’s flights of fancy need the secondary eye of a director to keep them moored (which is certainly saying something, given that his collaborators on those films, Spike Jonze and Michel Gondry, are among contemporary cinema’s great fabulists).

Watching I’m Thinking of Ending Things, however, I was able to draw a finer bead on the issue. In those first three films, there is a narrative hook upon which Kaufman’s extravagances can hang: a doorway into someone else’s mind, a medical procedure to manually remove painful memories, a manifestation of a writer’s creative anxieties. These nifty premises give us an entryway into Kaufman’s weird little world, a point of reference which grounds us before leaping into the void. In Synecdoche, and now in I’m Thinking of Ending Things, we are simply thrown into the deep end; from the outset, it is clear that everything onscreen is an abstraction, meant to be read in finger-quotes. As a result, as dazzlingly original as the films are, it is very difficult to become emotionally invested, even as the characters are put through the wringer. When everything onscreen is a metaphor for the characters’ mental state, it’s hard to care about the characters themselves– and if you don’t care about the characters, why would you want to bother with the metaphor?*

Is I’m Thinking of Ending Things worth seeing? Of course it is; Kaufman is the sort of singular auteur who is always worth checking out, especially during a medically induced movie drought which might get worse before it gets better. But what you get out of it probably depends on what you bring into it; to those not on the film’s wavelength, its elliptical structure and feel-bad characters will be an endurance test. Like his characters, Kaufman’s arc appears to be a spiral into his own head, with each film more insular and recursive than the last. I love many of his films, and will forever be in awe of his gifts, but at some point I’ll have to accept that he’s chugging along without me. (To quote one of my favorite lines from Community: “Come on, Charlie Kaufman, but some of us have work in the morning!”). Ah, well– if nothing else, maybe I’ll end up in his next novel.

* – Curiously, I don’t have as much of this issue with Antkind, in which Kaufman’s indulgences are leavened by the consistently comic tone. It’s as much of a lark as a 600-page novel can be.