There are two print magazines to which I currently hold a subscription. The first, it may not surprise you, is Fangoria, which, in its glossy, writerly current incarnation, is one of the best film publications currently in print, genre or otherwise. The second is a little more obscure, at least on these shores. The Fortean Times, a British magazine named after early paranormal researcher Charles Fort, is one of the world’s longest-running journals of the occult, the supernatural, and the simply strange. Unlike similar magazines, however, the Fortean Times for the most part refrains from wild-eyed woo-woo, with well-researched articles that balance intellectual rigor with humor and accessibility– it’s not “skeptical” by any means, but it’s certainly wry. A typical issue of the Times will include a news-of-the-weird roundup, a digest of ghost and cryptid sightings, a handful of deep-dive articles on topics ranging from folk horror and ley lines to MK Ultra experiments and hollow earth theories, and, inevitably, one piece or another about Aleister Crowley. It’s a consistently delightful read, and my bathroom is never without a healthy stack of back issues.

I’m going to go out on a limb and say that British filmmaker Ben Wheatley read a lot of Fortean Times during the lockdown. It’s not a stretch to imagine that he’s at least familiar with the magazine: his best known films, the modern folk horror classics A Field in England and Kill List, are steeped in the same sort of veddy British spookery that fills its pages month after month. In recent years, Wheatley’s work has tended toward the mainstream, with his underrated action comedy Free Fire and his Netflicked remake of Rebecca looking for all the world like failed attempts at “selling out.” But perhaps the forced solitude of social distancing has pulled things back into focus for the director. In the Earth hearkens back to Wheatley’s earlier films, by turns horrifying, psychedelic, arcane, and deeply personal. There is a lot going on here, and even though not all of it connects, I consider that a feature, not a bug.

In the Earth takes place in the midst of a global pandemic (never explicitly stated as COVID-19, but come on). Scientist Martin Lowery (Joel Fry) and park ranger Alma (Midsommar’s Ellora Torchia) embark on an expedition into the deep English forest to reconnoiter with Lowery’s colleague, Dr. Olivia Wendle, who has dropped out of contact following months of isolated research. There are signs that all might not be right in the wood– legends of an ancient forest-witch, an abandoned campsite on the outskirts of the forest– but Martin and Alma don’t pay too much mind; when the world’s topsy-turvy and your loved ones are dying of a virus, one can only be so frightened scary stories to tell in the dark. Their trip is waylaid when they meet Zach (Reece Shearsmith), a seemingly helpful survivalist/squatter who, it’s obvious early on, is absolutely out of his fucking mind. And when they do finally find Dr. Wendle (In Fabric’s Hayley Squires, channeling Barbara Steele with her tight bun and piercing gaze), it becomes clear that her research has taken a decidedly unorthodox turn. Try as they may to keep their feet on scientific ground, Martin and Alma quickly realize their journey into the heart of darkness has only just begun. 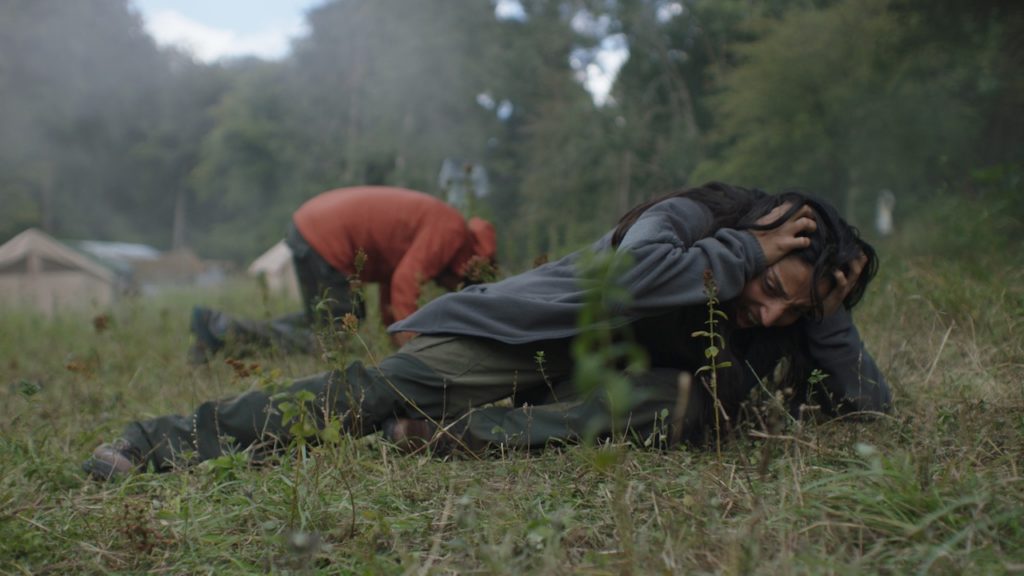 What I enjoyed the most about In the Earth is the way it refuses to pin itself down. For marketing purposes, it is easiest to describe as “pandemic horror” or “folk horror” (the latter serendipitously timed with Kier-la Janisse’s excellent new doc Woodlands Dark and Days Bewitched), but neither of those descriptors tell the whole story: the pandemic barely enters into things at all (more on that in a bit), and the narrative is far more adamantly modern than the typical folk horror tale. At different moments, In the Earth is a Blair Witch-style nightmare hike, a deranged hillbilly “torture porn” bloodbath, an MK Ultra-tinged eco-thriller, and, finally, a full-on psychedelic freakout (with dazzling trip sequenced devised by Youtube CG madman Cyriak). Through it all, the common thread is the unknown, that Fortean sense of vast, unknowable secrets lurking just outside the bounds of our perception. The characters here are uniformly smart people, with a firm enough grasp of how the world works that they can tell the moment that it stops working that way.

This, of course, extends to the pandemic. There have been a handful of COVIDsploitation movies made so far, ranging from the pretty great to the pretty dire, but they’ve all dealt with the pandemic in more or less literal terms. Wheatley takes a much more interesting approach, removing most of the specifics and isolating (so to speak) that sense of early-quarantine dread we were all going through around this time last year. Strikingly for a “pandemic horror” movie, we never see the effects of the virus itself (which, again, is never named, and sounds maybe a degree or two worse than COVID). Instead, we see the psychological effects of isolation on its characters. When Martin arrives at the ranger post, he’s fresh out of four months of self-quarantine, and while he’s seemingly “fine,” he’s clearly a little twitchy for the wear. Wendle and Zach, meanwhile, are completely off their rockers, and while there are narrative reasons for their madness beyond the COVID-crazies, let’s just say that it’s easy to relate.

But, again: this is not a “pandemic horror” movie, not really. It’s a film about the unknown, about humans trying to wrap their minds around a world too busy with its inscrutable inner workings to care whether puny humans live or die. In its final form, In the Earth nearly abandons narrative entirely in favor of pure, unadulterated psychedelia. The madness of its characters resembles that of Lovecraft’s gibbering protagonists, but Wheatley manages to convey their terror without resorting to be-tentacled elder gods. Is the supernatural afoot, or is it all in their heads? In the end, it doesn’t really matter. The horror isn’t in the monsters, but in the world itself. If you don’t believe me, pick up the latest Fortean Times— or just reflect on the past 13 months.