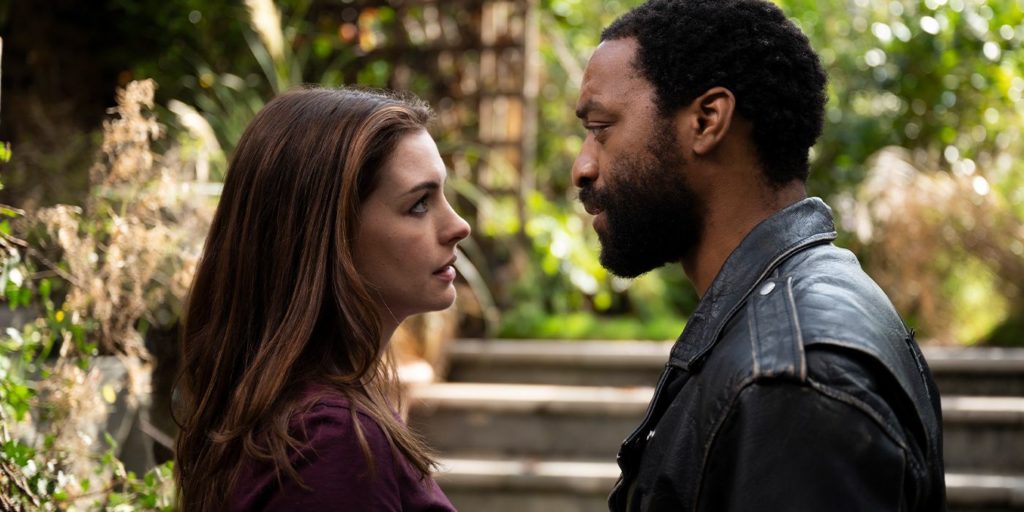 Locked Down is the first legitimate piece of media I’ve watched that actively incorporates the pandemic into its storyline. Although I expected I’d behave differently, I was pleasantly surprised that a movie centering the pandemic didn’t make me want to scratch my eyes out. Locked Down proves to be an inoffensive little movie, despite it’s megawatt stars, and although it rarely, if ever, achieves anything like greatness, it’s still a cute, middling way to spend two hours.

Linda (Anne Hathaway) and Paxton (Chiwetel Ejiofer) are a long-term couple who have just decided to separate, only to be confined together due to the lock down in London at the beginning of the pandemic. The movie often focuses on the well-trod ennui of both a dissolving marriage and life in lockdown, occasionally treading new territory with how these two significant events interact with each other and affect our characters and their decisions. The movie takes a thrilling third-act turn into the heist genre, when fate and COVID-19 restrictions allow for the distinct possibility of Linda and Paxton stealing a £3,000,000 diamond and getting away with it. As the couple considers this plan, they likewise begin to think more about what freedom might actually mean out of lockdown and without the other.

With a story seemingly designed to be grand and cinematic, pandemic-constrained production notwithstanding, the movie instead ends up feeling mundane and flavorless more than anything. The script, from Steven Knight, rarely seems like it wants to take any risks or dig deeper into these characters and their decisions, no matter how hard Hathaway and Ejiofor try to give us some sense of character depth or personality. Additionally, the attempt to blend different genres—comedy, romance, heist—is particularly unsuccessful, resulting in a featureless blob from script to direction. It’s no help that much of the comedy is restrained or nonexistent. There are moments that are funny, but most of it comes off as intending to be funny without hitting any comedic beat. And as much as the movie comes close to engaging with the interesting intersection of a dissolving relationship and an escalating pandemic, it instead continually falls back on near-hacky writing, with characters monologue-ing their every decision and compulsion and thought. In some ways it seemed like the movie was trying desperately to explain why these characters are separating and why they might feel compelled to potentially steal a diamond, piling on reasons one after another, not so much treating the viewer as stupid as attempting to sell them on something that doesn’t really need that much selling. In reality, the pitch of “two hotties who love-hate each other and want to steal a diamond in the middle of the pandemic for their personal gain but also to give money to a brutalized healthcare system” doesn’t really need much additional explanation for a general audience.

This isn’t all to say that the movie is a total failure. Hathaway and Ejiofer are so exceptional that they can do wonders with even the most fragmented of movies, whether it be Hathaway dancing and screaming to an Adam Ant song or Ejiofor loudly reciting poetry in the street to his trapped neighbors. Watching them play off of each other is a wonderful time, even when they must muster all of their acting chops for some pretty meandering, ultimately unfulfilling, dialogue. Where the movie comes together most clearly, perhaps unsurprisingly, is the heist scene in the third act, which culminates in such a particular way as to resemble an unexpected proposal of sorts. Director Doug Liman’s talent for this sort of filmmaking becomes apparent, and the script and filmmaking truly coalesce into a fun and thrilling sequence reminiscent of Liman’s similar, albeit better, Mr. And Mrs. Smith.

As much as I want these good parts of the movie to stick, there is one scene in particular that stands out most in my mind as a sort of unfortunate example of the whole movie’s flaws. In it, Hathaway gets out of a car, accidentally bumping the camera, and then proceeds to act out a painfully forced line concerning her grandmother. Like this scene– expositional, amateurish, and ultimately unnecessary– the whole screenplay and movie often feels like a rough draft, waiting to be tightened and revised (and edited) into something a bit more worthwhile.