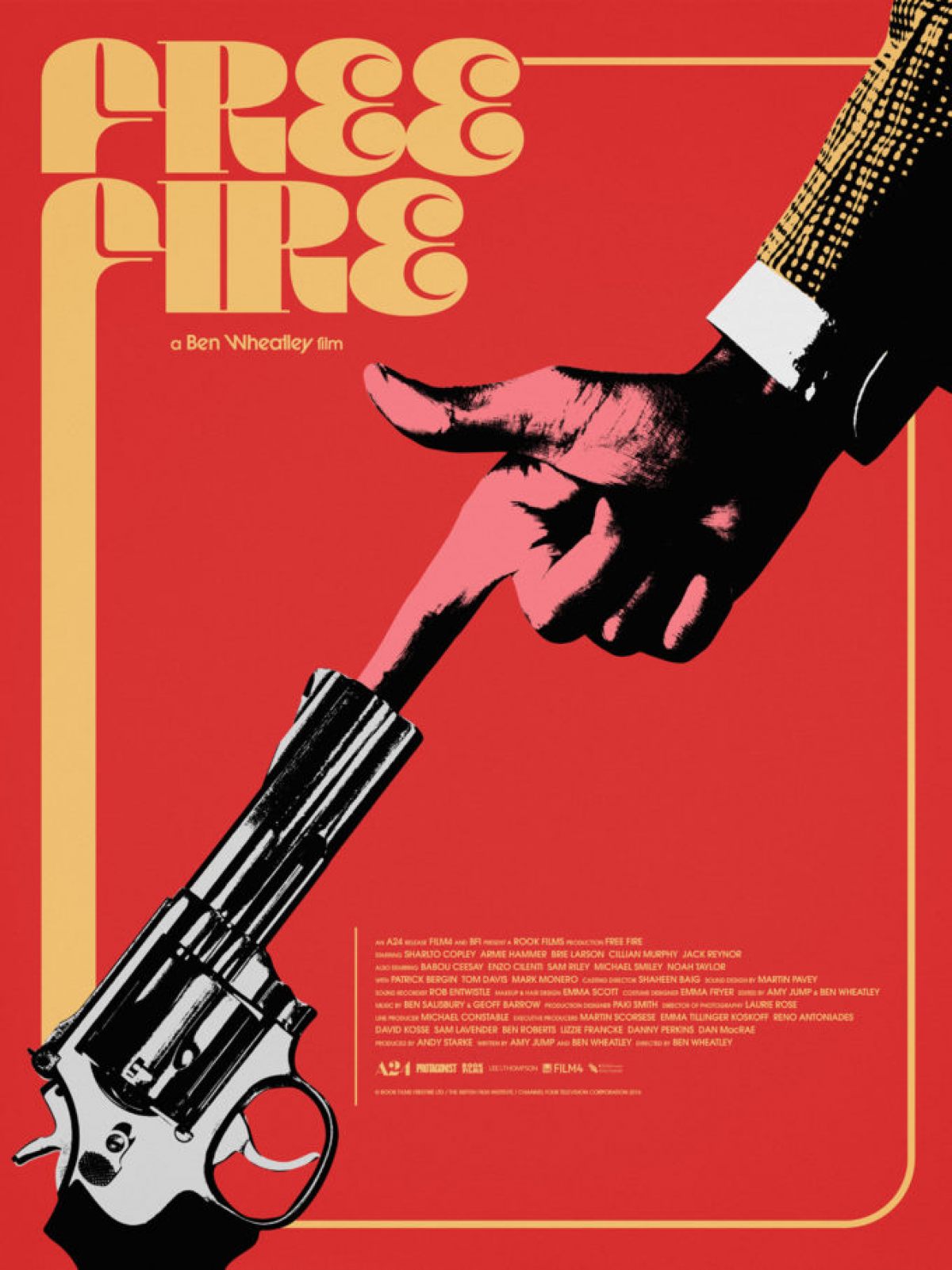 Film critic Pauline Kael once famously summed up the James Bond franchise with the four-word phrase “Kiss Kiss, Bang Bang.”* As pop-criticism, it’s brilliant, because it works no matter where you stand on the subject. To the highbrow, it sums up everything wrong with the genre, the simple-minded violence and regressive sexuality summed up into a catty dismissal. To others, however, that same utterance can serve as a celebration – see Shane Black’s deconstructive action feature of the same name. In this context, the phrase is a mission statement, a promise of the removal of all that boring crap to boil cinema down to its most satisfying elements.

Free Fire, the new film by brit-horror sensation Ben Wheatley, takes this maxim one step further, removing the “Kiss Kiss” part of the equation, and adding on a few “Bangs” for good measure. Roughly speaking, Free Fire does for the gunfight what drive-in classic Vanishing Point did for the car chase, cutting out the fat and delivering an entire movie of what its intended audience paid to see. It’s the cinematic equivalent of a “bottle episode,” its characters confined to a single location and enmeshed in a single, ever-worsening conflict. Its title is not a metaphor – it’s a simple descriptive label.

Of course, there is a story. Set in 1970s Boston (a location never explicitly stated, but made clear by the silly fashions, sillier accents, and the inspired opening soundtrack selection of the Real Kids’ “Do the Boob”), Free Fire centers on a pair of IRA-affiliated brothers (Cillian Murphy and Michael Smiley) who arrange to buy an arsenal of machine guns from an eccentric South African arms dealer (Neill Blomkamp regular Sharlto Copley) and an ex-Black Panther (Babou Ceesay), with help from a pair of incongruously professional middlemen, played by Brie Larson and Armie Hammer (I will admit up front that I may have some of the details of the deal wrong; I enjoy gangster movies, but the intricacies of their plotting sometimes make me feel like I’m watching C-SPAN). The two parties meet in a warehouse on the waterfront, each accompanied by a pair of townie mugs (Sam Riley and Enzo Cilenti with the buyers, Jack Reynor and Noah Taylor with the sellers). Unfortunately, Boston is a small town, and its townies prone to drama; heated words are exchanged, shots fired, and the stage is set for the remainder of the movie. 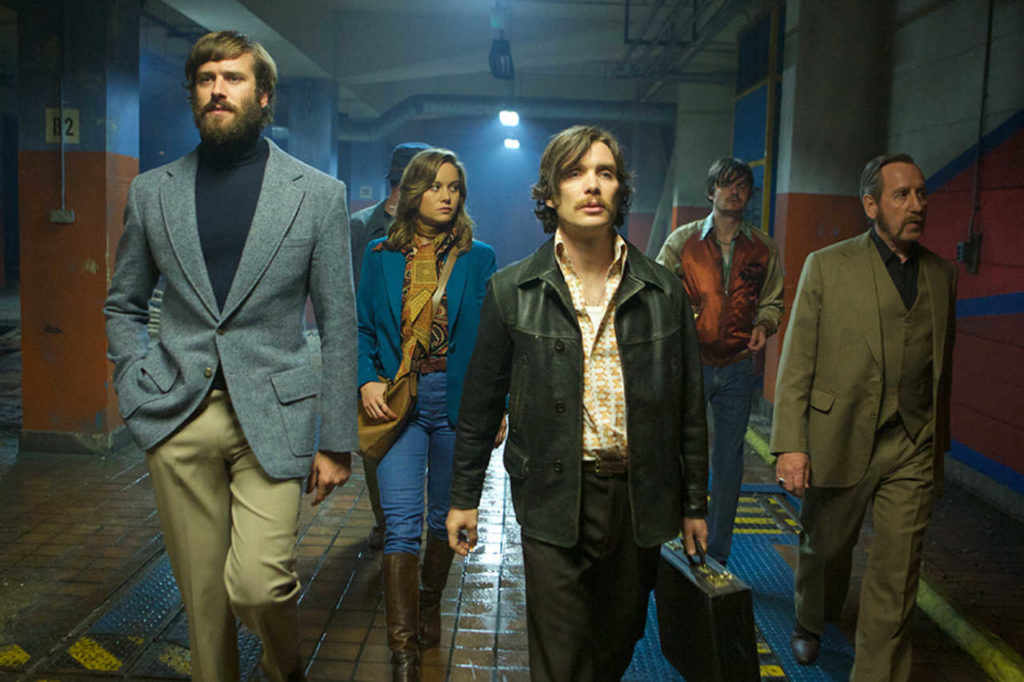 I use the word “stage” for a few connotations. With its small cast, crisp dialog, and confined quarters, Free Fire could almost work as a stage play – albeit one with a significant budget for pyrotechnics and Karo syrup. But “stage” figures heavily in video game terminology as well, and Free Fire bears perhaps even more resemblance to a multi-player “battle mode,” complete with convenient ammo crates and environmental easter eggs. And like a video game, its characters can withstand more punishment than any conventional human body; while all ten characters take at least one bullet in the first act, it takes a surprisingly long time for anyone to actually die.

This isn’t to say that the violence of Free Fire is stylized, per se – the wounds will be far too graphic for some viewers to stomach – but it is in finger-quotes. The initial burst of violence, while not as artfully orchestrated as the bullet operas of John Woo, is more like bullet musique concréte, stretched out to nearly surreal lengths, the reports of the individual firearms becoming character voices in their own rights. Once things settle down, the gunshots become less acts of violence than punctuation marks; characters will shoot one another to prove a point, and once the shock value wears off, it becomes difficult not to laugh. If “splatstick” weren’t already a genre, this film would surely spawn it. 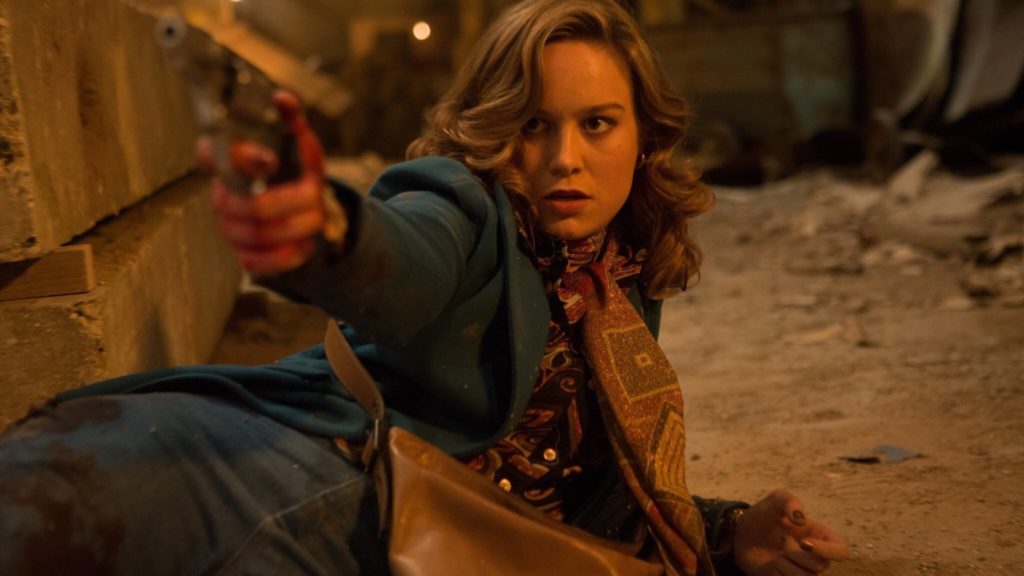 It would be easy for Free Fire to lapse into the empty nihilism that proliferated in the post-Tarantino era. Fortunately, Wheatley (and Amy Jump, his wife and longtime co-writer) are smarter than that. Despite being anchored in one space, the script never stops moving, adding new wrinkles and shifting McGuffins without ever feeling contrived. The characters are uniformly well-sketched, each fleshing out their respective archetypes into fully developed characters (as Wheatley joked at the Q&A after the preview screening at the Brattle this Tuesday, the movie should be a sexy adventure starring Larson and Hammer, but the throwaway supporting characters won’t let them out of the first scene). And the cast, despite each spending the duration of the film acting through varying levels of blood loss and intoxication, sell the hell out of the material; particularly memorable are Hammer’s macho, hilariously mellow proto-hipster, and Copley, whose character somehow feels more alien than his jittery mo-cap android in Chappie. Spending so much time in closed quarters with so many deliberately awful people can be a big ask, but Free Fire leaves one wanting to see more of its characters (even though most of their stories pretty definitively end before the film does). The whole thing plays a little like Sleuth on steroids.

To be sure, there will be some who tire of Free Fire’s brand of sick humor; even at a relatively lean 90 minutes, there are stretches where the pace drags, and its cast has perhaps two hoods too many. But for those in tune with its grimy sensibilities, it’s a nearly irresistible bit of poison pop cinema; I had a big ghoulish grin on my face for pretty close to the entire running time, and several particularly cathartic sight gags had the crowd cheering. Like a good cheeseburger, its nutritional value is questionable, but it’s satisfying enough that it’s difficult to care. Free Fire knows exactly what it wants to be, and succeeds with flying colors. It just so happens that most of those flying colors are shades of red.

*- A bit of cursory google-fu has informed me that this phrase may actually predate Kael; according to various sources, “Mr. Kiss Kiss Bang Bang” was either originally used as a 007 epithet by an unnamed Italian journalist, or was used in foreign translations as the actual name of the character. In any event, the term is most closely associated with Kael, who went so far as to use it as the title to one of her collections of reviews. Also, I’m a big old snob and quoting Pauline Kael makes me feel important, so just let me have this.