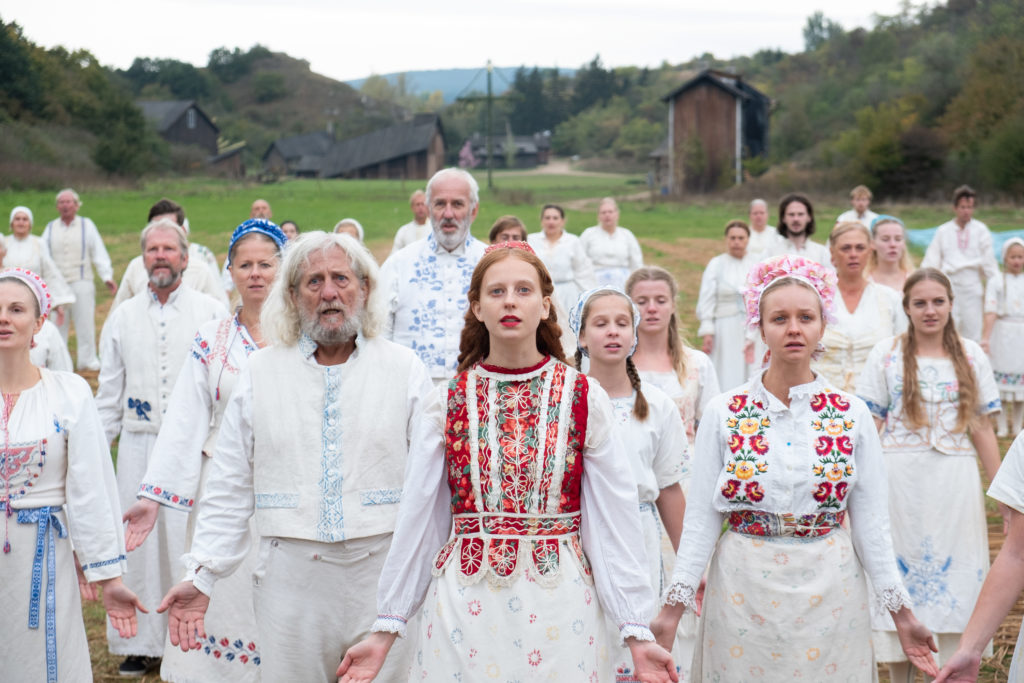 Photo by Csaba Aknay, Courtesy of A24

A couple of summers ago, I took a trip to visit family in Denmark, which happened to coincide with my cousin’s eighth birthday. As we gathered around the table, my family breathlessly informed me that it was time for the kagemand. I was initially puzzled; growing up, the Danish side of my family had celebrated all manner of curious traditions, but this was a new one on me. As it turns out, the kagemand, or “Cake Man,” is a large almond pastry, shaped like a child and decorated with candles and assorted candies. Once the songs were sung and the candles were blown out, the birthday boy was handed a large knife. We were instructed to count to three, at which point my cousin gleefully cut the kagemand‘s throat, the family screaming in delighted mock-terror.

I bring this up to provide context to my reaction to Midsommar, Ari Aster’s sophomore effort on the heels of last summer’s Hereditary (which I adored about as much as you can a film which is often dedicated to hurting you). Walking into the film’s world premiere on Tuesday, I braced myself for something as harrowing and gut-wrenching as its predecessor. To be sure, Midsommar is an experience, overwhelming its audience emotionally, sensorially, and, at nearly two and a half hours, possibly physically. But it’s also a work of surprising beauty, and, even more surprisingly, catharsis.

There is a moment part way through Hereditary (I’m not going to spoil it for those who haven’t seen it and don’t want their day ruined) in which the protagonist is abruptly plunged into abject, unimaginable grief. This happens in Midsommar too, only this time it hits before the opening credits roll. Said protagonist is Dani (Florence Pugh), a twentysomething simultaneously struggling with a devastating personal tragedy and a sputtering relationship with her long-term boyfriend, Christian (Jack Reynor). Christian’s friends, Josh (William Jackson Harper) and Mark (Will Poulter) have been pushing him to get off the fence about breaking off their relationship, and the three have already booked a boys’ trip to the family home of their friend, Swedish exchange student Pelle (Vilhelm Blomgren). In light of Dani’s situation, however, Christian feels obligated to stick it out with her, and reluctantly invites her to join them, expecting her to decline. She accepts, and the five make their way to Scandinavia. 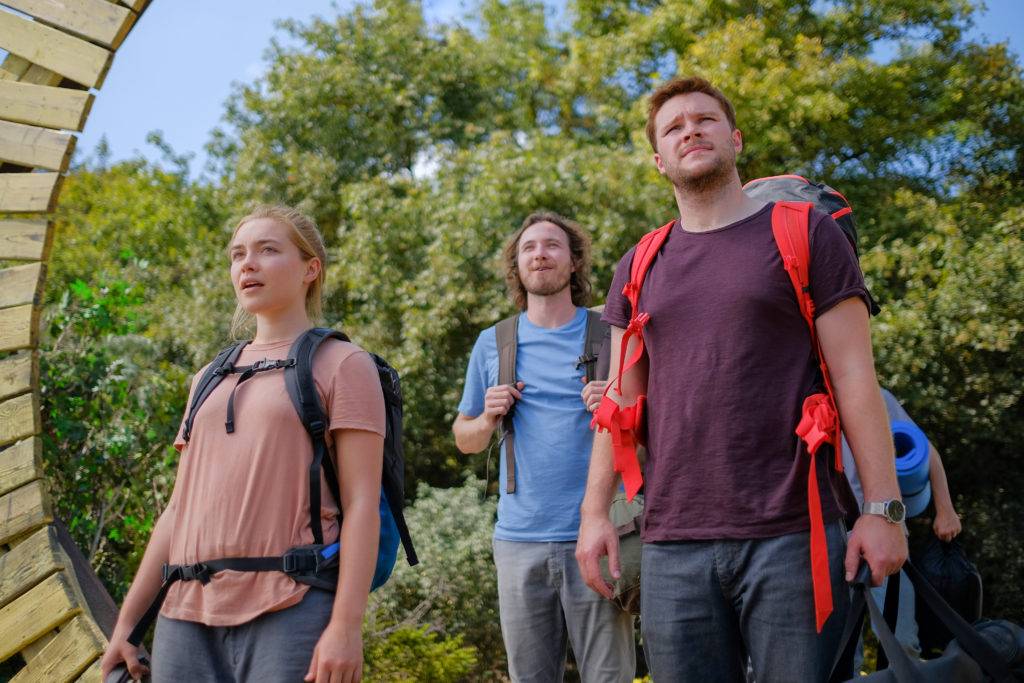 Photo by Gabor Kotschy, Courtesy of A24

It soon becomes apparent that Pelle’s background isn’t exactly conventional. Pelle hails from a tiny village/commune called Hårga, and their visit is timed to fall on a Midsommar festival held only once every ninety years. Anthropology student Josh is in his element, constantly interviewing the village elders about their traditions for his thesis; Christian and Josh are mostly bemused, but content to go along for the ride, participating in the rites and availing themselves of the freely-flowing hallucinogens. Dani, meanwhile, finds herself adrift, still coping with her loss and trying to figure out what on earth she’s doing, both in Sweden and in her relationship. Of course, this being a pagan-cult horror movie, the Hårgans’ traditions slowly reveal themselves to be something even stranger than they appear to outsiders.

One of the most striking differences between Midsommar and Hereditary is how funny it is. Granted, praising a film for being “funnier than Hereditary” is a little like saying it has more tap-dancing than Cannibal Holocaust, but the audience at the premiere was laughing far harder and more often than I ever would have expected. Part of this is due to the rituals of the Hårgans themselves, which don’t so much walk a line between horror and absurdity than erase it. But it also lies in Aster’s keenly observed satire of the privilege and solipsism of contemporary, male, American youth, manifested in the over-the-top Ugly-Americanisms of Mark and the bottomless douche/weenieness of Christian. Christian isn’t a bad guy, necessarily, but the callousness with which he treats both Dani and his friends seems to come from a vacuousness that will be all too familiar to anyone in the film’s target age demographic. Christian is every button-down grad-school bro you’ve ever rolled your eyes at, and Reynor plays him like Chris Pratt drained of all charm. 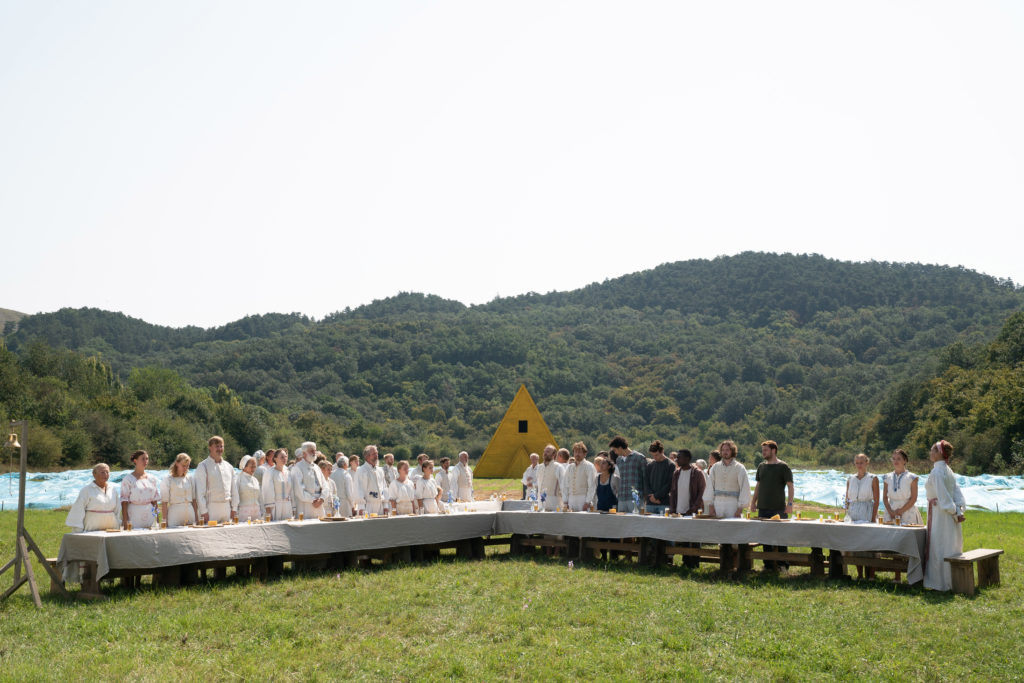 Photo by Merie Weismiller Wallace, Courtesy of A24

Going back to my quip in the last paragraph: I obviously meant it as a joke, but the more I think about it, the more I realize “Cannibal Holocaust with dancing” is actually a pretty accurate description of Midsommar. Like that infamous video nasty (of which you can probably get the gist without forcing yourself to see it), Midsommar derives both its horror and its commentary from the notion of being dropped unprepared into a culture which wants to kill you for reasons you can’t possibly fathom. (Aster admitted in the post-film Q&A to weaving in bits of a number of real-life cultures, but declined to name any for fear of slander). But unlike Cannibal Holocaust, which trades in brutal realism, Midsommar occasionally feels like a splashy, Busby Berkeley musical, regularly slowing down to film the Hårgans’ rituals with an almost loving reverence (it almost certainly holds the record for most uses of the word “pageantry” in a horror movie). In these scenes, the eye-popping color palette and dizzying camerawork of cinematographer Pavel Pogorzelski combine with the powerful, droning score by The Haxan Cloak to create a trancelike state, similar to that of the Hårgans themselves. Visually and sonically, it’s perhaps the most beautiful horror movie since Argento’s Suspiria.

This is perhaps the most surprising element of Midsommar. Unlike Hereditary, which spends its running time ratcheting up the suspense until it reaches nearly unbearable levels, Midsommar opts to lull you, even seduce you into siding with its cult. It’s worth noting that, while they share some notable qualities, the Hårgans are a far cry from the Paimonites of Hereditary. Rather, like the denizens of Summerisle in The Wicker Man (a film to which Midsommar owes an obvious debt), it’s not difficult to be taken in by their idyllic lifestyle, and even to find merit in it. In the Q&A, Aster made the point that “their language is empathy,” and that sentiment underscores their every ritual. In particular, I found myself won over by Pelle, who at the very least is the one character who treats Dani with anything approaching respect or kindness. 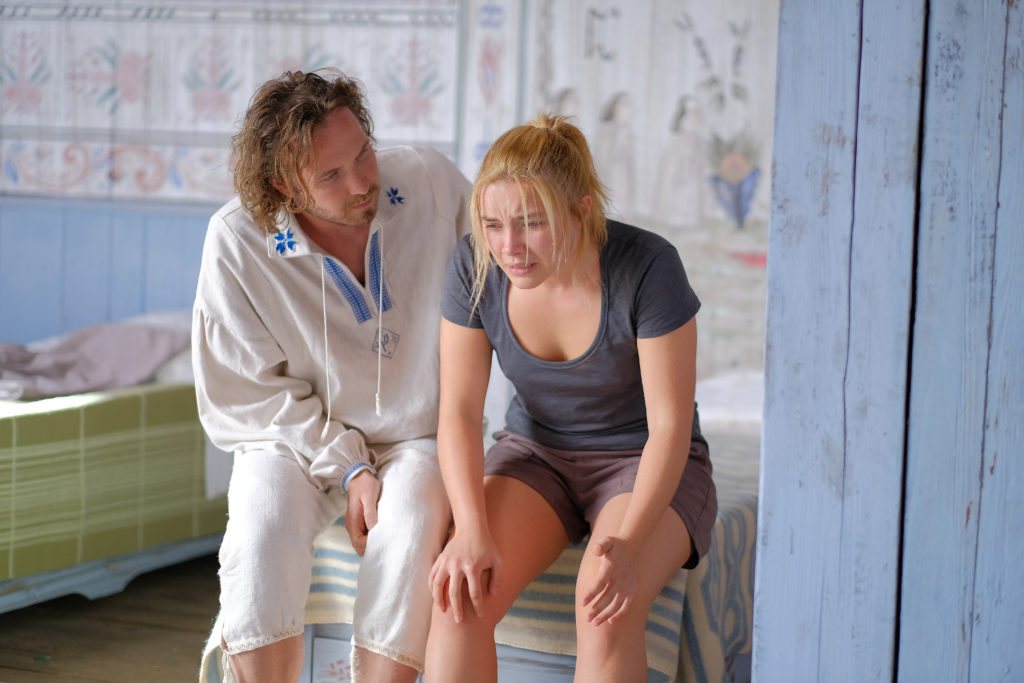 Photo by Gabor Kotschy, Courtesy of A24

Which brings us to Florence Pugh. I have no idea what Ari Aster says to his actresses, but his films are currently two-for-two for phenomenal lead female performances. Like Toni Collette in Hereditary, Pugh pours all of herself into her role, but where Collette gives a wildly external, full-body performance, Pugh places her emotions just below the surface, yet instantly recognizable and mesmerizing. Dani’s emotional journey is the core of the film, and even when other characters are speaking, you find yourself watching her face for each heartbreaking micro-reaction. Later, once the festivities are in full swing, Aster keeps you in her headspace through editing, tricks of focus, and the occasional CGI hallucination (sometimes flamboyant, sometimes breathtakingly subtle). But the legwork is all Pugh’s, and the film would be far lesser without her.

There will be some who will balk at the film’s more leisurely pace than its predecessor. Like Jordan Peele’s Us, there is a sense that the success of Aster’s debut has emboldened a confidence that some may characterize as indulgence (again, this movie is 140 minutes long). But unlike Peele’s film, which, while undeniably inventive and entertaining, occasionally feels like it’s trying to go in several directions at once, Midsommar finds Aster laser-focused, albeit on something strange and nearly inscrutable. Unlike Hereditary, which is a film which grabs you by the face and drags you, screaming, into its own particular hell, Midsommar envelopes, washes over, and very nearly drowns you. The more you relate to its emotional core (and Dani’s pain is astonishingly relatable), the more likely you are to be swept up in its nearly indescribable conclusion, which, depending on how you read it, might even be a happy ending! I love Hereditary, but I need to take at least a month or two between screenings to regather my bearings. I went into Midsommar knowing I would be seeing it again when it comes out in a couple of weeks, and honestly? I kind of can’t wait.