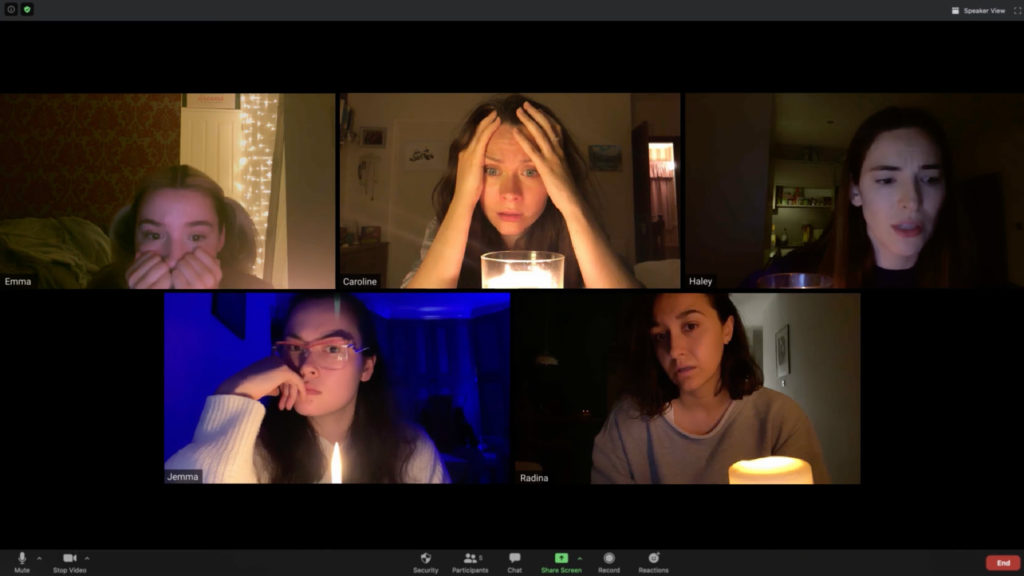 When I first learned of the existence of Host, my immediate reaction was: “Of course.” Of course someone took advantage of the COVID-19 pandemic to direct a found-footage horror movie over Zoom, and managed to complete and release it while the quarantine was still going strong. Independent filmmakers, particularly those who work in horror, are always looking for a canny angle by which to fuse a trendy zeitgeist with a microscopic budget. And of course I had to check it out. Good or bad, this seemed like a movie that should be consumed right now. While it’s always interesting to revisit a movie that captures a specific, historic moment on film (I’m positive there are better examples, but the one that springs to mind is the scene in Multiple Maniacs where they learn of the Manson Family arrests), watching such a movie while the moment is still ongoing is a unique experience. It’s a gimmick, but who doesn’t love a good gimmick?

Yes, the First Zoom Horror Movie was an inevitability. Less inevitable is the fact that it stands on its own feet as one of the year’s best horror movies, gimmick or no gimmick.

Host begins, as it must, in lockdown. In what will undoubtedly be a familiar scene to most viewers, six friends in their twenties connect over Zoom for drinks, laughs, and sentiments of incredulity that this is what the world is like now. As a theme for their virtual happy hour, however, Haley (Haley Bishop) has introduced an unusual twist: she’s invited a local psychic she’s consulted a few times to lead the group in a digital seance. Predictably, most of the group can’t bring themselves to take it seriously (more than half attempt to turn the seance into a surreptitious drinking game), and the seance is ultimately aborted shortly after it begins. Of course, this being a found footage horror movie, things begin to take a spooky turn, and the friends quickly come to terms with the fact that they may have summoned something beyond their control.

On its face, Host belongs to the second wave of digital age post-Paranormal Activity found footage (superficially, it most closely resembles the desktop conceit of the Unfriended series). The cinema verite obstructions of its production, meanwhile, recall The Blair Witch Project; like Myrick and Sanchez, director Rob Savage never shared a physical space with his actors, and left them to stage their own scares and effects within their own houses, opting (albeit by necessity) to pull the strings from afar. But despite these similarities, Host perhaps shares the most DNA with an even earlier found footage frightfest: Ghostwatch. Like that infamous faux-reality BBC special (which aired exactly once in 1992 before being shelved due to thousands of angry phone calls, frightened children, and at least one suicide), Host operates with a brutal sort of English efficiency. There are some laughs in the first act– just enough to make you feel like you’re watching an actual Zoom call between slightly inebriated friends– but once it gets down to the business of scares, it never lets up. Savage could have easily coasted on the novelty of his premise, but it’s clear that his primary goal, as it should be, is to scare the shit out of you.

Of course, that doesn’t mean he doesn’t play with his unique format as well. One can imagine Savage daydreaming during a Zoom meeting, analyzing each aspect of the experience for spookiness potential. Over the course of Host’s lean running time, everything from glitches and dropped calls to filters and novelty backgrounds are weaponized to get under your skin. The scares range from tried and true (sudden knocks, sliding chairs) to inexplicable bits of techno-terror seemingly plucked out of creepypasta. Perhaps most ingeniously, Savage uses the familiar Brady Bunch-style splitscreen to turn his film into a sort of three-ring circus: at any given moment, three different characters might be experiencing their own hellish phenomena simultaneously, the rest watching in helpless terror. Some of the most iconic images in recent horror come not from the scares themselves, but in seeing the characters’ reactions. In Host, 90% of the running time is spent staring directly into its protagonists’ faces, and the uniformly excellent cast sell it flawlessly.

Credit must also be given to the cast for rigging their own shots. The majority of the effects are practical (though there are a few that I sense must be at least somewhat augmented), but they never come off as fakey. Savage and his cast are smart enough to keep the scares brief yet effective, playing with negative space and digital artifacting to maximum potential. Several simple shots made my hair stand on end, and they manage at least one truly horrific image that I won’t soon forget. Not every scare necessarily lands (in particular, a running gag involving face filters never quite worked for me), but thanks to the format, your eyes can always wander to a different one at any given time.

Is Host as artfully constructed as some of the genre’s more notable instant classics of recent years? Perhaps not; while the characters are well acted and convincingly portrayed, they occasionally blend together, and I found myself trying to remember which one had the shitty boyfriend and which one lived with her dad (I know it’s found footage convention for characters to share names with their actors, and I know they’re English, but there’s no screenwriting excuse for having a character named Emma and a character named Jemma in the same movie). And at 56 minutes, there are some who will argue that it doesn’t even qualify as a feature film. But in addition to adding to the film’s verisimilitude (even in times like these, who pays for a professional Zoom account?), Host’s running time plays to its advantage. Unlike too many studio horror films, there’s no second-act breather or questionably necessary subplot to resolve. Not a minute is wasted that could be spent devising a new fresh hell for its poor, quarantined victims, and the result is positively dizzying. Host would have been worth watching even if it sucked, if all it had going for it was its peculiar place in movie history. Instead, it’s one of the scariest movies of the year, made all the more so for its unassuming framework. I’m usually a stickler for watching movies on an actual TV (or, god willing, a theater screen), but this is one that’s probably improved by watching on your laptop screen. Just be prepared to explain to your boss why you’re so jumpy on your next virtual meeting.