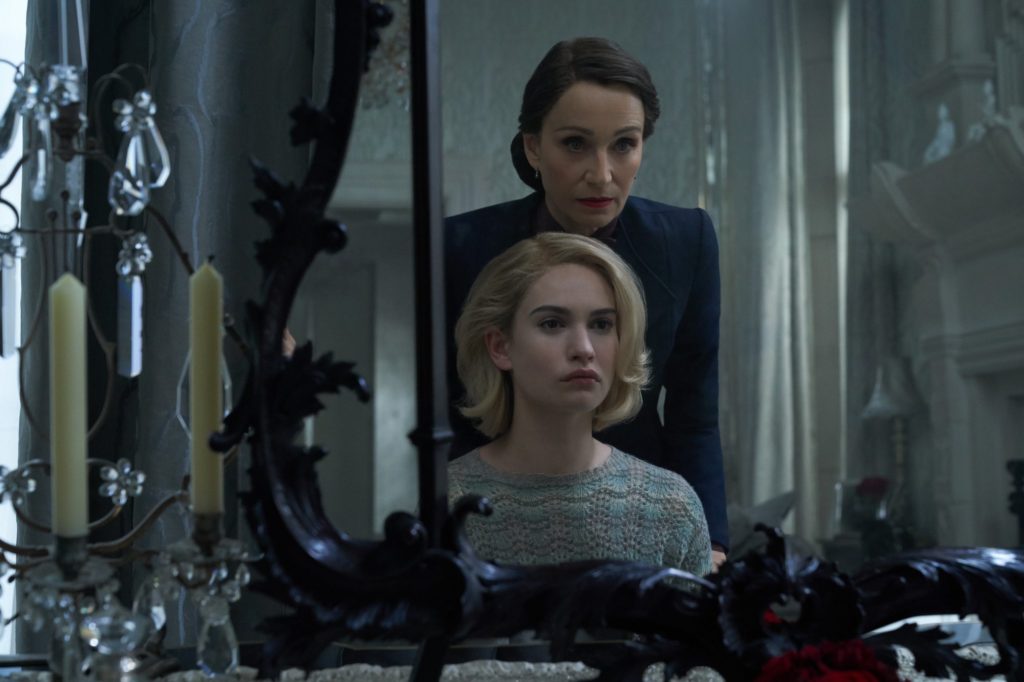 “Last night I dreamt I went to Manderley again.”

And so begins Rebecca, no matter it’s iteration.

First written by Daphne du Maurier in 1938 and memorably adapted by Hitchcock in 1940—his first American film—Rebecca is the gothic and darkly beguiling tale of the second Mrs. Maxim de Winter, who remains nameless in her own story. After a whirlwind marriage, the couple moves to the de Winter family estate: the beautiful, if dangerous, Manderley. The second Mrs. de Winter, naturally in a tale such as this, discovers that the ghost of Maxim’s first wife—the titular Rebecca—haunts the estate. Not so much phantom or ghost, as she is simply an indelible memory on the house itself and on all those who meet her, perhaps none more than the stoic Mrs. Danvers, the Manderley housekeeper. The second Mrs. de Winter soon discovers that the people and walls around her might be more sinister than she originally thought…

It was, of course, already a perilous task to take on a remake or adaptation in today’s cinema culture, and Netflix and director Ben Wheatley had the additional challenge of attempting to live up to the original novel and the Hitchcock classic. Although remakes and adaptations are usually derided or lumped in with ill-advised sequels, I usually relish in them, considering them along the same classification as theater revivals. Sometimes it’s fun to watch new actors inhabit roles made famous—or infamous—long ago, just as much as a new eye can bring unexpected vision or clarity to well-known stories.

It’s unfortunate, then, that the normally exceptional Ben Wheatley proves to bite off more than he can chew with a misguided take on this classic story. He somehow simultaneously misunderstands the dark complexity of du Maurier’s novel just as much as he neglects any character psychology that Hitchcock brought to the forefront. Wheatley loses himself in the gothic trappings and surface-level characterization, near-slavishly following the novel but still somehow rendering much of the movie bland and uninformed through confounding storytelling and production decisions. Of note, the movie’s most unique feature ends up being it’s burden by the end, as Wheatley injects a bit of Sirkian melodrama into this version of Rebecca, but then never quite remembers to match it to the tonal shifts in the story. The whirlwind romance between the second Mrs. de Winter (Lily James) and Maxim de Winter (Armie Hammer) is presented softly and sensually, in a way that Hitchcock quite frankly could never—or perhaps never wanted to—present. This is a new and pleasant shift from the Rebecca as we know it, which tends to paint a dark and cold relationship between these central figures. But although bright colors and melodrama flourishes serve the movie’s initial scenes, a soft and delicate touch waters down the murkier aspects of the story, especially where it concerns Rebecca’s central twist. In Hitchcock’s movie, the details of the midpoint revelation make Maxim a more clearly sympathetic figure, nothing more than the victim of a heinous accident. Although it might rob du Maurier’s work of some of its central themes, particularly concerning dangerous men and the women who love them, it ends up making the ending—and the second Mrs. de Winter’s decisions—more understandable both to an audience then and an audience now. In Wheatley’s Rebecca, however, the details from du Maurier’s original novel are maintained. In the novel, Maxim is no longer a sympathetic figure according to the facts we are given, and instead, he remains a mystery to everyone but the second Mrs. de Winter, so inspired by love and surrounded by seeming danger that he seems the most secure option, even if his love for her overshadows any suspicions she might have of him.

Although the details of the twist in the movie are the same as du Maurier’s novel, Wheatley’s filmmaking flattens any complexity that might be found in these characters once all is revealed about the titular Rebecca. Instead of a woman making some questionable decisions, the second Mrs. de Winter is now a heroine doing nothing but right by her man. Maxim is no longer a dark, potentially dangerous mystery, but a stalwart and honest husband. Love conquers all, and our heroes are simply left with the nightmare of Manderley and the villainous women who nearly ruined them. This misunderstanding of the story and this inability or lack of desire to explore these characters extends to performance as well, although I can’t quite parse out whether this is a failure of direction, of acting, or some combination of both. I lean towards the former, given the choices made in the filmmaking. Armie Hammer and Lily James do perform wonderfully, with the latter bringing an unpredictable, near-manic quality to the second Mrs. de Winter. I’m obligated to mention that, simply due to how memorable she is, Ann Dowd is genius in what amounts to a cameo.

The only true breath of fresh air in an otherwise stale movie is Kristen Scott Thomas, who is perhaps the only person who brings anything resembling thought to story and the inner life of her character. Mrs. Danvers remains a legendary figure in lesbian villainy, her devotion to the late Rebecca perhaps stemming from more romantic desires. Hitchcock, given the era, leans into the now more-obvious tropes of queer villains, and Judith Anderson is exceptionally memorable in the role in the 1940 Rebecca. Whereas Anderson locked her Danvers off to the world—a puzzle to pore over again and again—Kristen Scott Thomas reveals a little bit more about the characters’ motivations and the emotion that drives them. She is the only one who astutely understands that, although she may be misunderstood, Mrs. Danvers—and the late Rebecca with her—are the most sympathetic figures in this tragic tale. Perhaps this was not clear to many in the 1930s, when lesbians and “loose,” free women were reviled, but it is exceedingly apparent now. Just as much as it is obvious that the men who kill these women are villainous, despite the stories these men may tell themselves and their loved ones.

Whatever interesting threads that could be pulled out and examined, especially in a world where the stories of reviled women are being granted new understanding (in I, Tonya, in Lorena, in The People v. O. J. Simpson: American Crime Story, etc.), are ignored by the movie in favor of ignorant, if brightly colored and topically romantic, contentment. The dark, puzzling Rebecca is flattened into a wholly traditional story with a wholly traditional ending. It’s a failure of both the filmmaking and of the screenplay. By focusing on surface-level gothic melodrama and star-crossed lover tropes, unanswered questions are turned into a gift with a bow, betraying the original intent of the story and ultimately serving supremely conservative interests.

To put it bluntly, Netflix and Ben Wheatley’s Rebecca is boring, mediocre fare. I recommend dreaming of another Manderley than what you will be given here.