The movie musical has seen its share of peaks and valleys over the years, but few will dispute that the genre’s zenith coincided with the Great Depression. There are probably many reasons for this (including the rise of talkies and early film’s close ties to the theatrical tradition), but the most romantic reading would be that America needed escapism. With the economy cratering and the dust bowl ravaging much of the nation, it became a cherished pastime to plunk down a nickel and take in a big, splashy MGM extravaganza. When times are tough, sometimes you just need to spend a couple of hours with Fred Astaire or Esther Williams.

In what’s probably a coincidence, but certainly serendipity, the post-pandemic cinematic landscape has seen a surprising uptick in musicals on screen– albeit not always in the traditional sense. On the one hand, you have In the Heights and the upcoming Tick, Tick… Boom!, flashy but more or less conventional adaptations of hugely popular stage performances. After that, you start to see some weirder films– the slam-poetry collaboration of Summertime, the avant-baroque high strangeness of Annette— which may be a far cry from Busby Berkeley, but are identifiably within the tradition. Then there’s Ema, the much-delayed new film from Jackie director Pablo Larraín. Ema is not a musical in the traditional sense, and it certainly isn’t anybody’s idea of escapist entertainment. But in its spectacle and jaw-dropping dance sequences, I found myself watching it every bit as agape as those itinerant workers watching 42nd Street.

Mariana Di Girólamo plays Ema, an impulsive reggaeton dancer married to her considerably older choreographer, Gaston (Gael García Bernal, returning from his visit to the beach that makes you old). Looking to start a family, the two recently adopted a young boy named Polo, but following a pattern of troubling behavior leading to a shocking moment of violence, the couple reluctantly returned him to the orphanage. This decision has cast a pall over Ema and Gaston, each blaming each other and themselves in equal measure. When the atmosphere becomes too thick to bear, Ema splits to live with her fellow dancers and embarks on a journey of self-discovery. As her behavior becomes erratic, and her conversations with Gaston about their past and future become more passive-aggressive, she channels her energy into her dancing, her friends, and her persistent fixation on poor, young Polo.

Horror movies frequently ask the audience to ask whether there are actually monsters, or if the protagonist is simply struggling with mental illness (spoiler alert: there are usually monsters). Ema is in no way a horror movie, but it asks a similar question: is Ema spiraling, or does she have a master plan? At first glance, her behavior certainly seems erratic. One day she hires a female divorce lawyer, with whom she strikes up a steamy affair. The next night she gleefully torches a car in the middle of town with a flamethrower, then seduces the handsome firefighter who comes to put it out. Yet, when we look into her eyes, we never quite get the sense that she’s out of control; even in her emotional arguments with Gaston, she never quite loses her cool, her steely gaze peering out from under her helmet of bleach-blonde hair. At one point, during her tryst with the firefighter, she coos, “I’m going to horrify you when you find out what I’m doing, and why.” Her paramour, naturally, brushes it off as dirty pillow talk, but canny viewers will raise an eyebrow.

Of course, in those horror movies, the answer is frequently “it’s both,” and that very well may be the case here. The situation with Polo may have been the straw that broke the camel’s back, but it seems safe to say that Ema and Gaston’s relationship was on rocky ground from the start. The two are clearly both exceptionally talented artists, and work well together as collaborators, but both are immature and self-destructive enough that they were destined for a flame-out; bringing a child into this coupling probably would have been a bad idea in any event, let alone with a child who brought his own issues to the table. When we see Ema and Gaston fight, they cut each other with the cruel precision that can only come from absolute intimacy. At the same time, neither seems especially fazed by the other’s barbs, as if this is all part of a dance which began long before we started watching. Ema— the character and the film– is often outrageous, yet these scenes often feel uncomfortably real.

Yet Ema is rarely difficult to sit through, thanks in large part to Larraín’s masterful eye as a filmmaker. Like the reggaeton music itself, Ema’s routines with her troupe serve as a backbeat to the entire film; Larraín uses their rhythmic, hypnotic dances through the streets of Santiago as scene transitions, the way another filmmaker might use sunsets or establishing shots. In his visual palette, Larraín has found a perfect complement to the music. Scenes are lit with neon blues and reds, and Ema’s wardrobe practically pops off the screen. On the page, Ema could have been a depressing, kitchen-sink character drama. It’s still that, but it’s also a visual experience like no other. 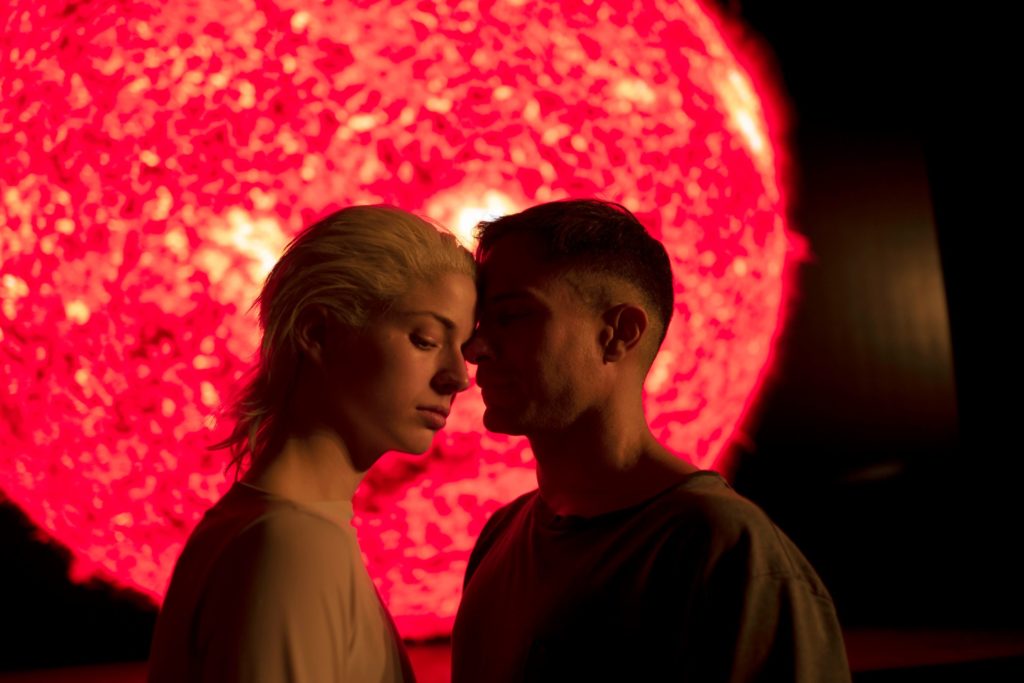 Then there’s Di Girólamo, who pulls off the nifty trick of a performance which is simultaneously flamboyant and internal. There is no question why all of these characters gravitate toward Ema, whether romantically, sexually, platonically, or as family. When Ema enters a room, all eyes naturally draw to her, and when she speaks, one can sense the other character falling under her spell. Yet she also remains a cipher, her Mona Lisa smile disguising a shrewd eye. To maintain this level of ambiguity while every single eye– on screen and off– is on you is a true balancing act, and Di Girólamo gives us a breathtaking performance.

All that being said, I’m not sure I can say I fully loved Ema; its opaque narrative renders it somewhat chilly, and its characters are so self-absorbed (and possibly sociopathic) that I’m not exactly dying to hang out with them again. Nevertheless, I’m glad I saw it, and the thrill of its visuals and performances will stick with me for a very long time. Its warts-and-all look at domestic strife and liberated sexuality may seem miles away from the fizzy musicals of the 1930s, but I found myself transfixed by the music and the spectacle nonetheless. For an hour and forty-five minutes, I was transported to a world of candy-colored lights and bump-and-grind bohemians. And, in the end, isn’t that what escapism is?