Like a character in one of his movies, M. Night Shyamalan seems to be stuck in the wrong timeline.

When a director of Shyamalan’s offbeat sensibilities makes it into the Hollywood big leagues, they generally follow a set path: a string of cultishly adored indie films; a critical breakout at Sundance; and, finally, a studio deal, either to craft a mainstreamed version of their stock-in-trade or, more frequently these days, to helm a big-budget superhero IP extension. This is, emphatically, not the path Shyamalan has traveled. After making one indie film and one studio rom-com (both barely released and hardly noticed), Shyamalan exploded onto the national consciousness with The Sixth Sense, a truly massive studio crossover hit which was nominated for six Oscars, made over 300 million Clinton-era dollars, and bestowed upon us one of film’s most instantly recognizable catchphrases (“I see dead people!”) and one of its most indelible performances (in Haley Joel Osment’s remarkable, wide-eyed Cole Sear).

The Sixth Sense was so phenomenally popular, and contained such an undeniable wonder, that the media began breathlessly speculating that Shyamalan was “the next Spielberg.” Besides being grossly unfair to any young filmmaker (try calling an up-and-coming musician “the next Dylan”), this comparison simply isn’t apt. Unlike Spielberg, whose modern fairytales are rooted in relatable everymen and kids-next-door, Shyamalan is a highly idiosyncratic auteur, whose puzzlebox narratives are framed around off-kilter characters and deliberately stilted dialogue. Unfortunately, that initial framework stuck, and millions of people who saw his wonderfully odd (and often very funny) Signs walked away thinking he had tried and failed to make a conventional alien invasion thriller.

Fortunately, time has been kind to Shyamalan’s image, and recent hits like Split have led to a reappraisal of the director’s singular (if admittedly uneven) filmography. Which leaves us primed and ready for Old, one of Shyamalan’s most satisfying– and clearly personal– films. 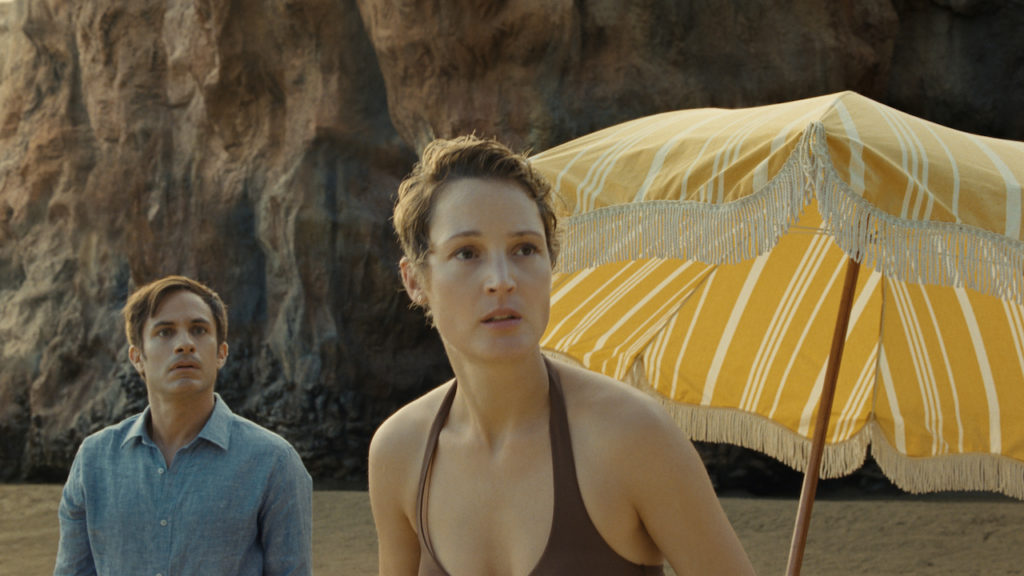 (from left) Guy (Gael García Bernal) and Prisca (Vicky Krieps) in Old, written for the screen and directed by M. Night Shyamalan.

Old follows the Capa family– father Guy (Gael García Bernal), mother Prisca (Vicki Krieps), and young children Maddox and Trent (Alexa Swinton and Nolan River)– as they set out on a sun-drenched vacation on a Caribbean resort. Sensing that they’d enjoy something a little different, a friendly concierge invites them to a secluded, private beach along a rocky coastline. The Capas relax in the sun with a small handful of fellow vacationers, but a series of increasingly odd events leads them to an alarming discovery: while on the beach, their bodies seem to age at an accelerated rate (roughly two years per hour, as estimated by a conveniently placed doctor). Guy and Prisca grow frantic, realizing that their kids have suddenly grown into gangly teens (now played by Thomasin McKenzie and Alex Wolff, with Elizabeth Scanlan as a fellow former kid). Attempts to leave the way they came in prove futile, forcing the vacationers to try to find a way out, or be doomed to live out their days in under 24 hours.

Like much of Shyamalan’s work, Old often plays like a Twilight Zone episode writ large, complete with nifty high concept and on-its-sleeve social commentary (in his obligatory cameo as the chauffeur leading the families to the beach, Shyamalan comes one step closer to just inserting himself as a Rod Serling host figure). Interestingly, this extends to the special effects. A different filmmaker might have used the aging effects of the island as a vehicle for Benjamin Button-style CGI, but, refreshingly, Shyamalan opts to mostly convey his characters’ advancing age through subtle makeup effects and acting, and the swift passage of time via oblique angles and fuzzy closeups. Indeed, though Shyamalan is best known for his screenwriting acrobatics, he here uses the camera as something of a subjective narrator, disorienting the viewer by leaving the characters out of the shot or listing constantly during a scene of dialogue. In at least one scene of despair, Shyamalan literally sets his camera out to sea, letting it slowly submerge along with his characters’ hopes. It’s rare to see a summer blockbuster shot so adventurously.

The Sixth Sense aside, it is occasionally difficult to judge the performances in an M. Night Shyamalan film, because the characters they are playing so rarely resemble actual, speaking humans. This is a film in which a character who identifies herself as a psychiatrist earnestly leads this group of strangers in a trust exercise, and in which young Maddox breathlessly identifies one of her fellow beachgoers, played by Aaron Pierre, as her favorite rapper, Mid-Sized Sedan. But, again, this occasional awkwardness is a feature, not a bug; Shyamalan is every bit the deliberate mannerist as Wes Anderson, and his cast is uniformly game. Best are probably McKenzie, who embodies the clunky physicality of a child whose limbs are suddenly several inches longer than she’s used to, and Bernal, playing the same kind of stoic, repressed father Mel Gibson played in Signs, but I can’t really think of a bad performance in the bunch. They all, as the meme goes, understand the assignment. 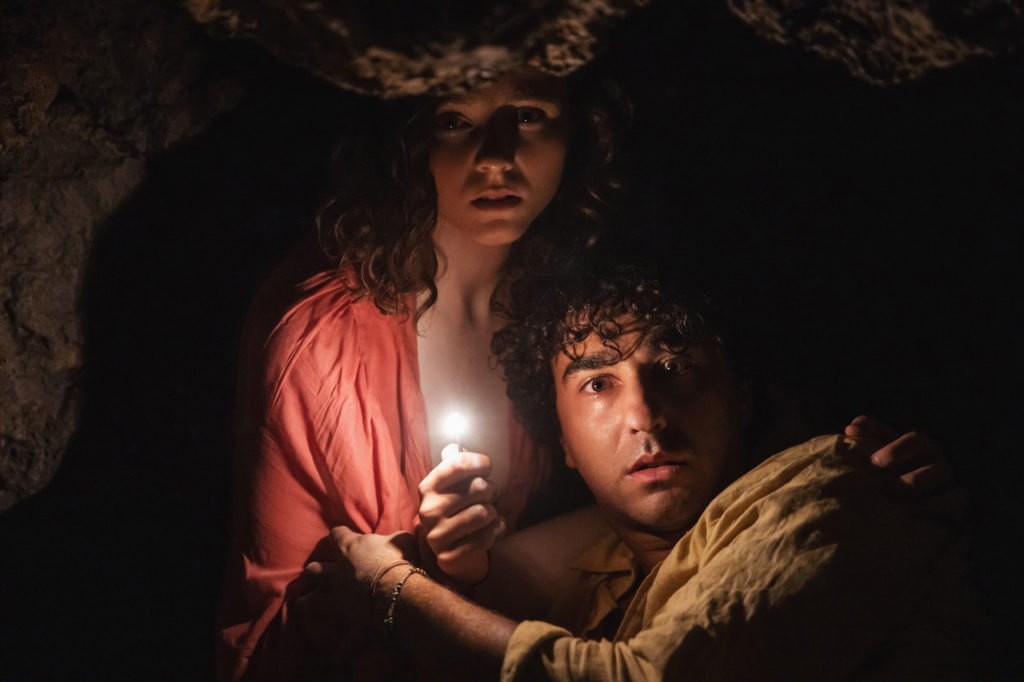 (from left) Maddox (Thomasin McKenzie) and Trent (Alex Wolff) in Old, written for the screen and directed by M. Night Shyamalan.

As the end credits rolled, I waited for, and found, the following words: “COVID Advisor.” Old is based on a French graphic novel published in 2011, and Shyamalan began developing it shortly after wrapping 2019’s Glass, but it’s difficult not to read it as his “COVID film.” This is, after all, a film about a small “bubble” of people trying to ward off certain doom in a small, isolated setting, and about growing distrust in the strangers around you. As a father of three, Shyamalan can surely see himself in Guy, desperately trying to protect his family from a threat about which he knows nothing. And while I of course am verboten from revealing anything about the third act of an M. Night Shyamalan film, there is a lot to unpack when viewed through the lens of recent events. (There is also a somewhat hamhanded subplot of racial tension between Mid-Sized Sedan and the uptight doctor, which is perhaps Shyamalan’s effort to broach the social upheaval of 2020). The shape of any creative project will inevitably be altered by the circumstances of its creation, and while there’s no way of knowing what a pre-COVID Old would have looked like, it seems safe to say it would not hit quite as hard as the version we got.

And believe me, it does hit hard. Like most of Shyamalan’s films, Old is rated PG-13, but don’t let that trick you into thinking that punches are being pulled. When Shyamalan leans into effects work, he goes all the way: a surgery scene is the most fantastically gruesome since Prometheus, and a late scene in a cave recalls the wince-inducing madness of vintage Sam Raimi. And even when there’s nothing particularly graphic going on on screen, Shyamalan makes you feel every one of the upsetting implications of the premise. Shyamalan has rejected the “horror filmmaker” label, and in his case I’m inclined to agree, but Old may be the most viscerally upsetting movie of the year.

Because, while it’s debatable the extent to which current events affected Old, it is undeniable that this is a film about the anxieties of aging. Shyamalan is only 50, but, just as much as Tarantino’s Once Upon a Time in Hollywood, this is the film of a one-time wunderkind contemplating the prospect of becoming an elder statesman. It’s easy to imagine him, as a father whose children are nearing adulthood, relating to the anxieties of Guy and Prisca. But I think, perhaps to an even greater degree, he sees himself in the children, outwardly maturing in the blink of an eye, but still retaining their youthful naivete. Late in the film, a now-fully-grown Maddox is building sandcastles with her brother. “Do you think everyone our age still feels like kids,” she asks, “or is it just because we actually were kids yesterday?” It was far more than yesterday that The Sixth Sense took the world by storm, but Shyamalan has lost little of that whiz-kid spark.

Opens Friday, 7/23, at Coolidge Corner Theatre (and pretty much everywhere else)