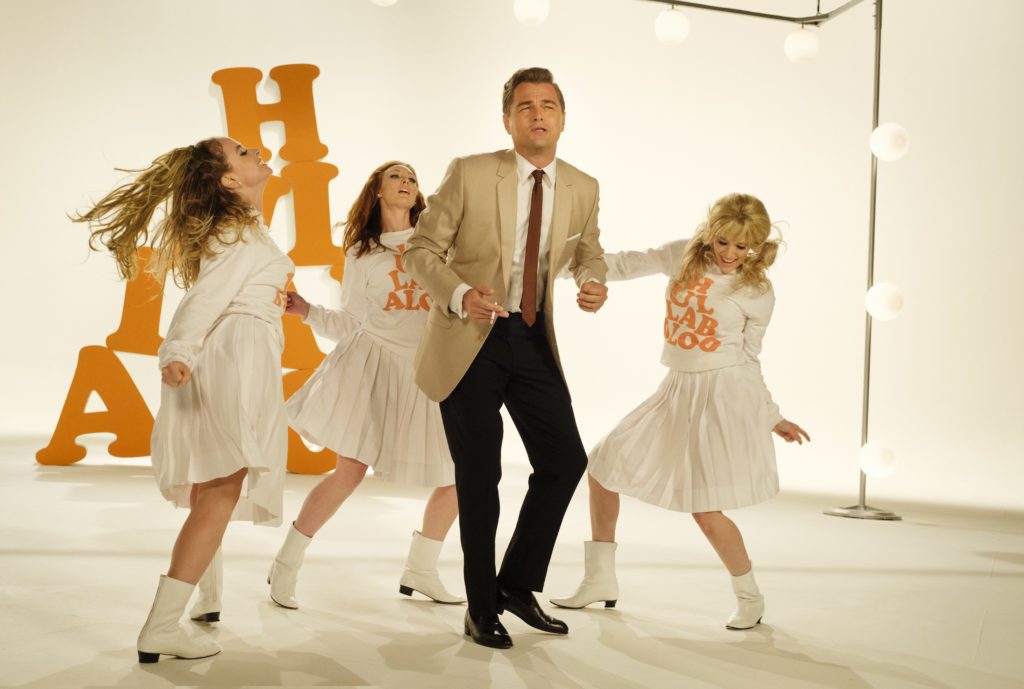 Of all the major contemporary filmmakers, few are as fundamentally knowable as Quentin Tarantino. With the possible exception of Kevin Smith, no director of his generation has more fully made their public persona so central to their work. And yet, despite the omnipresence of his personal obsessions, Tarantino’s films have always been curiously free of anything resembling actual autobiography. Apart from his own gratuitous cameos (and perhaps Christian Slater’s wish-fulfillment-fantasy geek-turned-outlaw in the Tarantino-penned True Romance), there’s never been a recognizable Tarantino surrogate character; watching his films, you get a comprehensive view of his tastes and obsessions, but it’s deceptively difficult to get a bead on Tarantino the man.

That changes, to some extent, in Once Upon a Time… in Hollywood (whose awkward ellipsis I refuse to type again in the body of this review). While Tarantino’s films are invariably in conversation with cinematic history, and several (notably Inglourious Basterds and Death Proof) have included subplots about the movie industry, this is his first to concern itself entirely with his own chosen profession. And while its protagonist is an actor, not a director, working nearly twenty-five years before the start of Tarantino’s career, it’s hard not to read the film as the semi-autobiographical musings of a (relatively) aging icon.

Hollywood’s central icon is Rick Dalton, a nearing-the-hill leading man played by Leonardo DiCaprio. Dalton found early success starring in a TV western titled Bounty Law, then parlayed that into a lucrative career in Hollywood war pictures. As the ‘60s wind to a close, however, Dalton finds himself increasingly reliant on TV guest-villain spots, as well as on his longtime stuntman/assistant/drinking buddy Cliff Booth (played with leathery Californian charm by Brad Pitt). Rick’s midlife crisis is contrasted sharply against his new neighbors: Roman Polanski (Rafal Zawierucha) and his wife, Sharon Tate (Margot Robbie), a young starlet whose future seems limitless (*cough*). Meanwhile, around the peripheries of society, a gaggle of glassy-eyed hippie chicks sing happy songs in the street, dumpster dive for abandoned loaves of bread, and speak glowingly to anyone who will listen about a guy they know named Charlie. 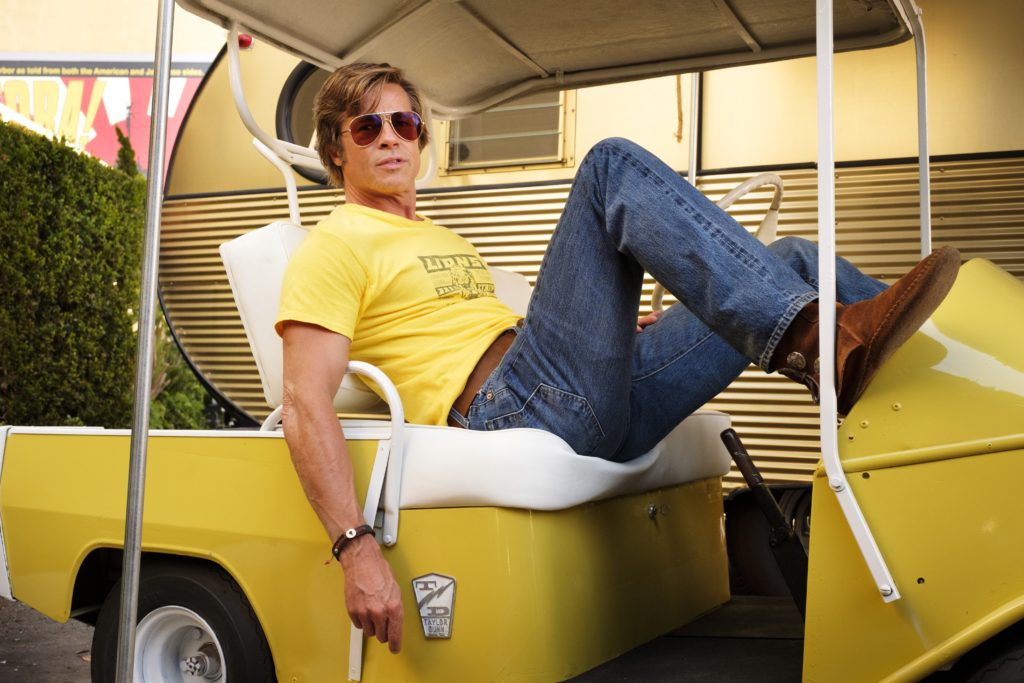 Even more so than usual, Hollywood feels like an expansive sandbox for Tarantino to play in. The director has always taken joy in casting and reappropriating icons from decades past; by setting his story in late ‘60s tinseltown, he no longer needs to limit his cast to the land of the living, roping in everyone from Bruce Lee and Steve McQueen to Sam Wanamaker and Mama Cass. As a result, Hollywood is a shaggy film even by Tarantino’s standards, occasionally feeling more like a series of vignettes than a single, cohesive story. This might be a problem if not for the characteristic control Tarantino brings to his writing and direction. The bulk of the film follows its three major characters over the course of a single day, and while none of them are particularly eventful (save maybe Cliff’s), nothing feels extraneous to the bigger picture.

As I’ve mused in this space before, the miraculous thing about Tarantino’s films is that, despite his unmistakably mannered dialogue, he arguably has yet to film a bad performance (again, himself excluded). Pitt is at his most charismatic, playing something like Lt. Aldo Raine by way of Dennis Wilson, but the movie belongs to DiCaprio. Rick Dalton isn’t Norma Desmond, at least not yet– he’s only maybe a year or two past his prime– but he’s acutely aware of the ticking of the clock. With his fortunes sagging, Rick retreats into depression and alcoholism, and starts to wonder if he was ever any good to begin with. He is good– when we see him work, he’s only slightly less believable than DiCaprio himself– but his booze-clouded brain can’t help but blank on a line or two. Later, when he beats himself up over it in the confines of his trailer, it’s perhaps the realest emotion ever displayed in the postmodern auteur’s filmography. 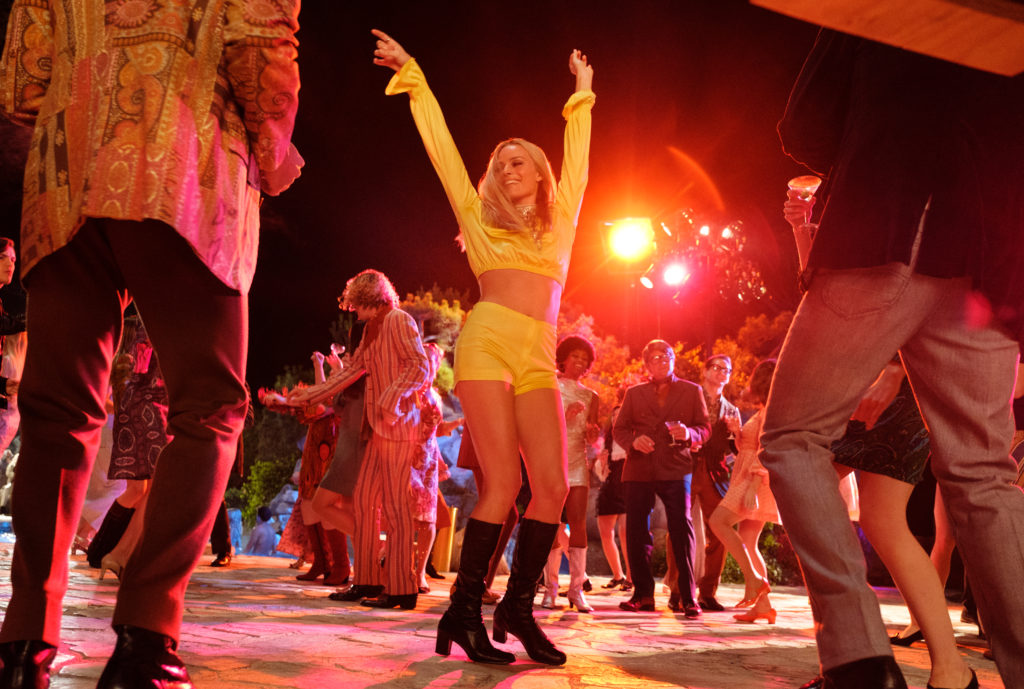 Margot Robbie stars in ONCE UPON A TIME IN HOLLYWOOD.

Then there’s Margot Robbie. Tarantino took some heat earlier this year following a testy exchange with a Cannes reporter over the dearth of dialogue assigned to his Sharon Tate. Tarantino’s response was a display of bad optics (to say the least), but the question does a disservice to the nuanced work Tarantino and Robbie do with the character. When people talk about Sharon Tate from today’s vantage, they don’t talk about her as an actress, but as a beautiful corpse; even when her work in Valley of the Dolls or The Fearless Vampire Killers receives modern praise, it’s never on its own terms, but rather in light of What Might Have Been. Tarantino and Robbie take two steps back, allowing you to see Tate as a person. It’s true that Robbie’s performance is nearly wordless for long stretches, but only because we’re watching a woman happily go about her daily life, like an inverse Jeanne Dielman. With very little dialogue, one gets a sense of a woman in love with the incredible luck that’s brought her to this particular time and place. When the timeline inevitably jumps to August 8th, 1969, your heart can’t help but sink to your gut.

Because, try as we may, we can’t talk about Sharon Tate without talking about Charles Manson and his “Family” of followers. Curiously, Damon Herriman’s Manson barely amounts to a cameo (if you feel cheated, you can see him reprise the role next month on David Fincher’s Mindhunter). Instead, Tarantino opts to focus on the Family itself, living like ghosts in the Hollywood hills (in an inspired touch, one showdown is framed against the still-standing Bounty Law sets on the Spahn Movie Ranch). At first glance, the girls (and the occasional dude, such as Austin Butler’s Tex Watson and James Landry Hébert’s braying Clem Grogan) seem like a loving, if slightly off-kilter, community– right up to the point that they don’t. I’ll admit to having probably spent more time researching the Manson murders than just about any other historic event*, and the way Tarantino accurately frames their menace while also taking the piss out of them is impressive. Particularly chilling is Dakota Fanning as Manson’s right hand, Lynette “Squeaky” Fromme. Fromme is such a colorful character that she’s easy to turn into a figure of fun, but Fanning nails her dark intensity, making her easily the most terrifying of the bunch. 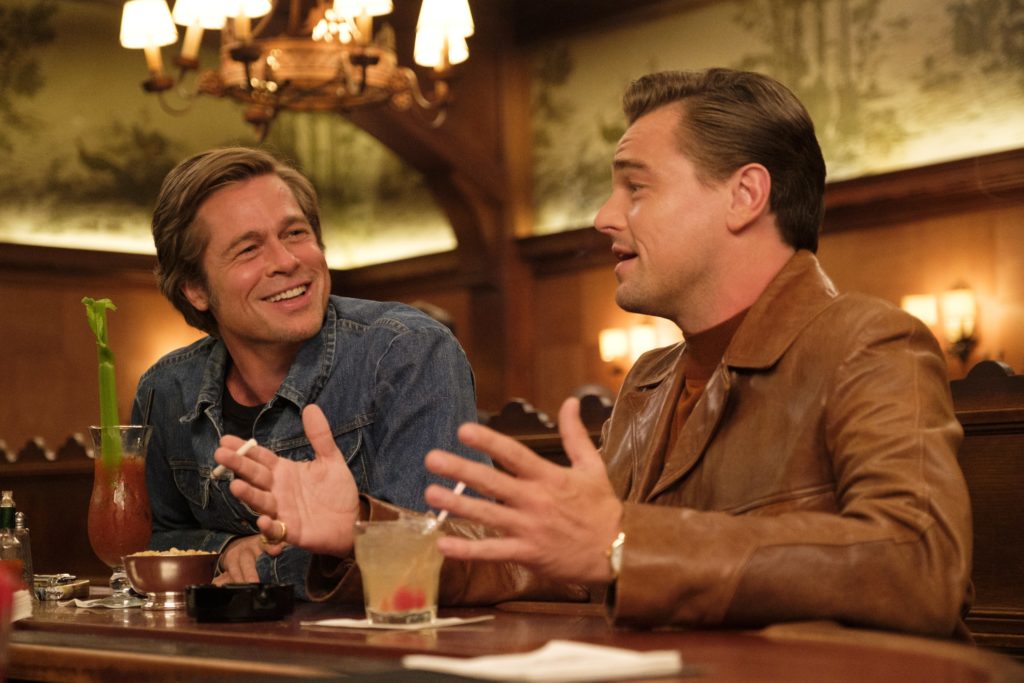 Brad Pitt and Leonardo DiCaprio star in ONCE UPON TIME IN HOLLYWOOD.

As is perhaps inevitable when a superfan like Tarantino turns his attention toward movie history, Hollywood is a somewhat messy film. Threads are picked up and dropped (in particular, a troubling element of Cliff’s backstory is never fully reckoned with), and the disparate stories don’t intersect as tidily as in, say, Pulp Fiction or Basterds. Then there’s the ending, about which I could say a LOT, both good and bad, but of which any discussion at all would probably constitute a spoiler. But in many ways, perhaps even more than Kill Bill, this feels like the movie Tarantino has spent his career preparing for. A curious thing about Tarantino is that, as much as he loves adopting the look and signifiers of cinema past, he’s seemingly incapable of shooting anything that looks or feels like anything other than a Quentin Tarantino Film. When Rick shoots his pilot, it plays exactly nothing like any TV show on earth in 1969, and everything like an outtake from The Hateful Eight. I don’t mean this as a slight; rather, Tarantino’s voice is so distinctive that it immediately fills whatever mold he pours it into. And yet, despite all the usual QT trademarks (Red Apple cigarettes, the “Coming Attractions” jingle, lots and lots and lots of unclothed female feet), Hollywood is distinct from the rest of the director’s oeuvre. Even at its most outrageous (and it does get plenty silly at points), there’s an elegiac, melancholy quality that’s never before been present in Tarantino’s work, and even– dare I say– sentimentality.

Quentin Tarantino is 56 years old. This is not “old” by most any normal human standards, but, for a celebrity whose brand is youthful exuberance and edginess, it’s positively ancient. What’s more, the director has vowed to bow out after ten films, and while Quentin Tarantino says a lot of things in interviews, he seems to be sticking with this one. This means that, barring a change of heart, Tarantino’s next film will be his last (and, bizarrely, there’s a better-than-zero-percent chance that it will feature Captain Kirk). So it’s understandable, if still somewhat surprising, that he might take a moment to reflect, soften a bit, and let his guard down for some genuine emotion. It’s there when Cliff offers Rick his sunglasses to hide his tears from the extras, and stops to tell him, “Hey, don’t forget: you’re Rick fuckin’ Dalton.” It’s there when Sharon Tate sneaks into a matinee of The Wrecking Crew, basking in the audience’s appreciation of her performance. Most of all, it’s there when Rick ruminates on his pending obsolescence, lacerating himself for the smallest error. Then, when he goes back in and slays his scenes the following day, it’s clear: in spite of everything, he is Rick fuckin’ Dalton. And while he’s been around nearly long enough to take for granted, the director is still Quentin fuckin’ Tarantino.

* – If you’re interested in a non-tasteless entry to this particular rabbit hole, I recommend the “Charles Manson’s Hollywood” season of Karina Longworth’s excellent podcast You Must Remember This, which explores the show-biz lives affected by the Family, while brilliantly framing Manson’s own arc as a classic Hollywood failure story.