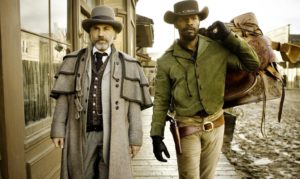 Seeing a Quentin Tarantino film in the theater is a cinematic experience, unlike anything else.

When I first was introduced to Tarantino’s films, this was the first thing I was told: there’s nothing quite like it. I only understood what this meant when I went to go see my first Tarantino film in the theaters.

Django Unchained rolled out into theaters in 2012, and I went to see it with a friend of mine. Django is studded with an incredible cast consisting of Jamie Foxx, Christoph Waltz (check him out in Inglourious Basterds if you haven’t seen it yet, it’s a must), Leonardo DiCaprio, and Samuel L. Jackson. I sat down, the lights dimmed, and the packed theater fell into silence. Opening titles exploded across the screen, channeling the spaghetti westerns of the mid-1960s. Big, fat title cards, explosive music, and perfect dramatic shots that nearly knock you into the film.

Django Unchained spins the tale of Django (Foxx), a brave, strong-willed slave in the deep south who is freed by Austrian dentist and traveling bounty hunter Dr. King Shultz (Waltz), a concoction of a lovably odd character that only Tarantino could conjure up. Schultz is a kind-hearted, justice-seeking soul with whom Django finds friendship. Schultz trains Django in the art of bounty hunting, and together the two form a partnership in which they hunt down renegade criminals across the deep south. Django opens up to Schultz about his past, including his relationship with wife Broomhilda (Washington), with whom he once attempted to run away. The two were separated, and Django longs to get her back and kill those responsible for her pain and misery. Schultz agrees, though Django points out that Broomhilda is held at Candieland, one of the most feared plantations in the South, home of the slimy, nerve-wracking, violent, and rotten-toothed slave owner Calvin Candie (played impeccably by Leonardo DiCaprio). Knowing full well what they may be getting themselves into, Django and Schultz hatch an elaborate plan to try and fool Candie in order to buy Broomhilda from him, freeing her. 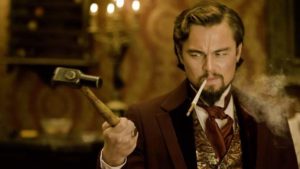 With a breathtaking soundtrack that brings a tear to the eye and emotion leaping off the screen (especially the scene where Anthony Hamilton and Elayna Boynton’s “Freedom” powerfully plays as Broomhilda and Django make a run for it in the night, angry plantation hands wielding torches hot on their trail), Tarantino proves he is one of Hollywood’s greatest – if not, the greatest. He knows how to take an unassuming song and turn it on its head, perfectly adding it to a scene where you’d never guess it would fit. If you like Rick Ross, James Brown, and 2pac songs beautifully incorporated into an expertly written historical action film packed with justice, brilliant acting, and a tiny bit of Tarantino humor, go see Django Unchained at the Brattle.

Pairing up with Django for a double feature is Tarantino’s 2015 film The Hateful Eight, packed with another stellar cast, including Tarantino favorites Kurt Russell, Samuel L. Jackson, Tim Roth, and Michael Madsen, alongside Jennifer Jason Leigh and Channing Tatum. Another Tarantino classic (honestly, what film of his isn’t?), the film follows another bounty hunter in post-Civil War America, Major Marquis Warren (Jackson) as he travels and takes cover in a haberdashery during a violent snowstorm. He travels with John “The Hangman” Ruth (Russell), a fellow bounty hunter, who is transporting his captured criminal, the grimy, racist, and heinous Daisy Domergue (Leigh). 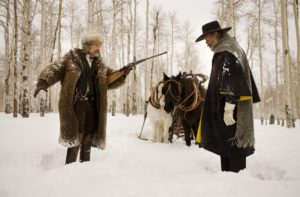 Once the trio reach the haberdashery, things begin to unravel, and it becomes apparent that everything is not as it appears. Warren must figure out who he can trust, who he cannot, and how he is going to get out of the haberdashery alive after the snow clears.

Channeling John Carpenter’s The Thing (so good, see it if you haven’t!), with Ennio Morricone’s brilliantly unnerving score (who also did the score for The Thing), the thematic element of mistrust and paranoia, and a creepy snowstorm, The Hateful Eight will have you on the edge of your seat.

Going to a Tarantino film is unlike any movie-going experience you’ll have. Go check these out. You won’t regret it.

Double feature – screens Saturday, 7/20 @ Brattle Theatre (Django screens at 2:45 & 9:15, Hateful Eight screens at 6:00)
The Brattle will be donating a portion of ticket sales from all of the Weinstein-produced titles in this program to the Boston Area Rape Crisis Center in recognition of the women that he victimized.