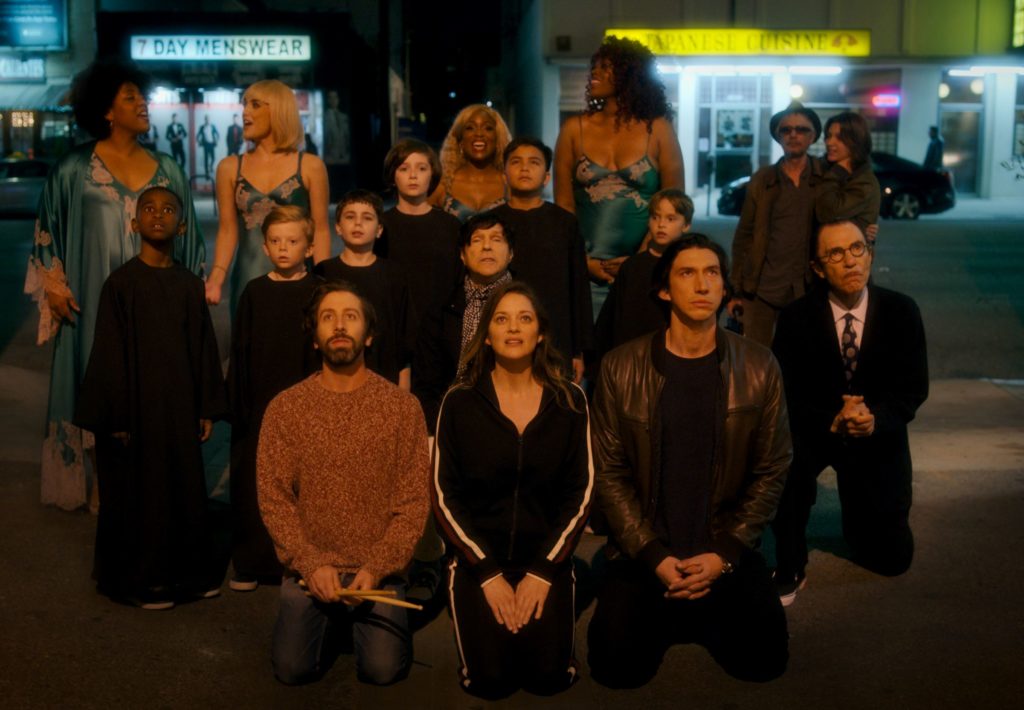 Over the years, there have been a handful of films which have struck me as so astounding that I’ve felt compelled to track every step of their production. The first I can remember is Bubba Ho-Tep, the premise of which– an aging Elvis Presley, played by Bruce Campbell, defends his nursing home from an evil mummy in a cowboy hat– felt like it could have sprung directly from my fevered teenage brain. I felt similarly about Grindhouse, the specificity of which seemed to be made exclusively for me and my film school friends (sadly, its box office returns suggest that this may have actually been the case). A few of these films, such as David Fincher’s long-gestating adaptation of the alt-comix body horror classic Black Hole or Alejandro Jodorowsky’s “metaphysical gangster film” King Shot, have yet to materialize, and are almost certainly dead in the water. This, perhaps, is why I feel the need to keep tabs on these films: their very existence seems so unlikely that, if I turn away, I’m afraid they’ll disappear.

The latest seemingly impossible film whose vital signs I’ve monitored in recent years is Annette. This film– a sung-through rock opera, written and conceived by cult glam-rock band Sparks, directed by Holy Motors madman Leos Carax, and, most improbably of all, starring A-list movie stars Adam Driver and Marion Cotillard– is so thoroughly up my street that I’ve more or less kept it in the category of “I’ll believe it when I see it.” As of this week, I’ve seen it, and I’m still not sure I believe it.

The plot, in a movie like this, is largely secondary, but here are the facts: Driver plays Henry McHenry, a massively popular standup comedian who seems to combine Bill Hicks’ no-holds-barred truthtellerism with the drop-deadpan absurdity of Steven Wright (though the latter may simply be a function of Driver’s natural cadence). Henry is married to Ann (Cotillard), an opera singer who specializes in grand, expressionistic performances about death. Their relationship is tempestuous and colored by Henry’s alcoholism and wild mood swings, but it results in the birth of Annette (played onscreen by a wooden marionette, complete with visible elbow and knee joints). Following a horrific accident, Henry discovers that his infant daughter possesses a singing voice to rival her mother. Reluctantly aided by Ann’s meek accompanist and conductor (Simon Helberg), Henry takes his daughter on tour, but quickly finds that his reckless and selfish behavior comes at a cost. 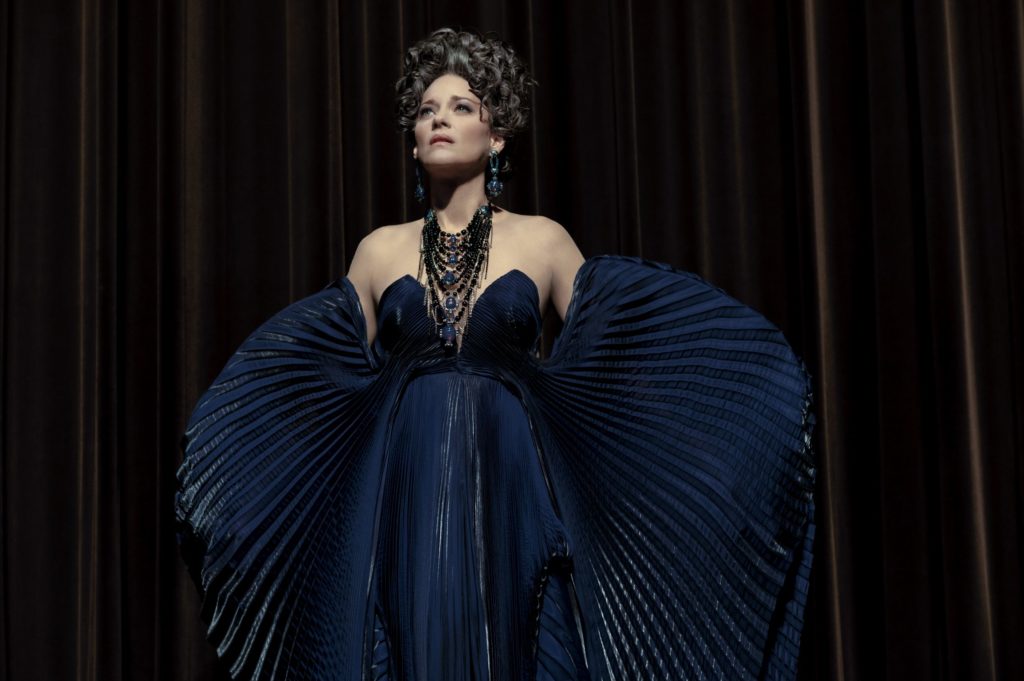 Even as a longtime Sparks fan, it’s difficult to imagine how Annette would play if it were not immediately preceded by Edgar Wright’s wonderful documentary The Sparks Brothers. That film makes something of an emotional throughline out of Ron and Russell Mael’s past thwarted attempts at breaking into movies– both a late ‘70s collaboration with the great French director Jacques Tati and an early ‘90s manga adaptation helmed by Tim Burton came to naught– with the production of Annette serving as the climax. Taken in this light, the opening sequence, in which the Mael brothers lead the main actors, a children’s choir, and Carax himself in a parade through downtown LA can’t help but feel like a victory lap. The Maels don’t exactly act in the film itself, but they can be seen lurking in most of the crowd scenes, and Russell’s voice and Ron’s piano skitter throughout the entire soundtrack. Carax may be the director, but the film is pure Sparks.

Annette is a musical, but not in the classical MGM sense, or even quite in the vein of such postmodern crowd-pleasers as Moulin Rouge! or Hedwig and the Angry Inch. Rather, this is a “rock movie” in the lysergic tradition of Tommy or The Wall or The Song Remains the Same: wild films made by ambitious musical artists looking to push the “concept album” format to its logical conclusion. Like those films, Annette is shaggy and, admittedly, occasionally indulgent, but it’s also exhilaratingly uninhibited and full of ideas. What’s especially interesting is that most of the major rock movies have been made by the swaggering, world-conquering rock gods who can demand a multi-million-dollar budget; it’s unusual to see a band this cultish allowed to play in such a large sandbox (the closest point of comparison might be Frank Zappa’s legendarily weird 200 Motels, but even Zappa was only a few yards outside of the mainstream in 1971). Annette is, in essence, a big-screen version of a Sparks album– specifically, one from their 2000s cycle of radical, avant-orchestral pop (think Lil’ Beethoven or Hello Young Lovers). If you’re familiar with those records, you’ve probably figured out by now that this movie is a trip.

But, of course, this is a movie, so let’s put the music aside for a moment. In Carax, the Maels have found a collaborator every bit as anarchic and inventive as they are. Annette was shot on a relatively modest $15 million budget, but its swooning cinematography and production design make it feel like a genuine epic; in its scope and visual invention, nearly every frame of the film is simultaneously eye-popping and grotesque. The same could be said of the film’s emotional beats, which mix outrageous humor with a sense of beauty and melancholy. Take, for example, the much-talked-about scene in which Driver delivers his half of a tender love duet only when coming up for air mid-cunnilingus, or a Superbowl performance in which the Annette puppet is hilariously dangled onto a glowing pedestal by gaudy LED drones. In an age where even the better studio films tend toward a drab visual sameyness, it’s thrilling to see a film which builds its own visual language and internal logic.

A film with this much going on visually and sonically could easily leave its human cast with as much agency as its titular puppet, but the leads are all cannily cast. Cotillard’s peculiar beauty makes her an ideal vessel for the film’s tortured heroine; her solo numbers deliberately evoke the yearning of The Umbrellas of Cherbourg (though, to be sure, Jacques Demy never had Catherine Deneuve perform a number while actively urinating). Helberg ably plays straightman to the proceedings in a role which could easily be seen as an avatar for silent Sparks partner Ron Mael (consider the scene in which Helberg bemoans the frustration of being the overlooked accompanist to a stunning frontperson, playing a piano which is almost certainly being overdubbed by Ron). And Driver proves once and for all his bonafides as one of the finest actors of his generation. His “stand-up” scenes (in which he ricochets back and forth between extremely confessional “comedy” and chant-singing the Maels’ Brechtian lyrics) are riveting, and his brooding intensity is every bit as arresting while serenading a wooden puppet as it is berating Scarlett Johansson. It is an inevitability that Driver’s name will one day be preceded by “Academy Award-winner,” and while Henry McHenry is probably too bizarre a role for the mainstream award circuit, this would be as worthy a performance as any to deliver him his first gold.

To be clear, Annette will not be a movie for everyone, or perhaps even for most. Carax is, after all, one of the most willfully antagonistic directors working today, and Sparks are literally the subject of a two-hour documentary about how much of an acquired taste they are. Viewers accustomed to more conventional narrative cinema may find themselves confused and adrift, and those with an aversion to Sparks’ brand of caustic, hyperliterate camp will likely consider this the longest film they’ve ever sat through (at nearly two and a half hours, even sympathetic viewers may wish it had been trimmed just a bit). But this is the kind of wild, mad-genius, swing-for-the-fences filmmaking that we simply don’t get enough of. Even after following its production for the past several years, and then watching a documentary detailing its road to the screen, and then finally seeing it with my own two eyes, I still have trouble wrapping my head around the fact that Annette is a real film which exists and can currently be seen at the movie theater of your choice. Its presence in our world feels like a glitch in the spacetime continuum– and, as a Sparks devotee and a midnight movie aficionado, I suspect it is a glitch I will exploit repeatedly until someone seals it up.