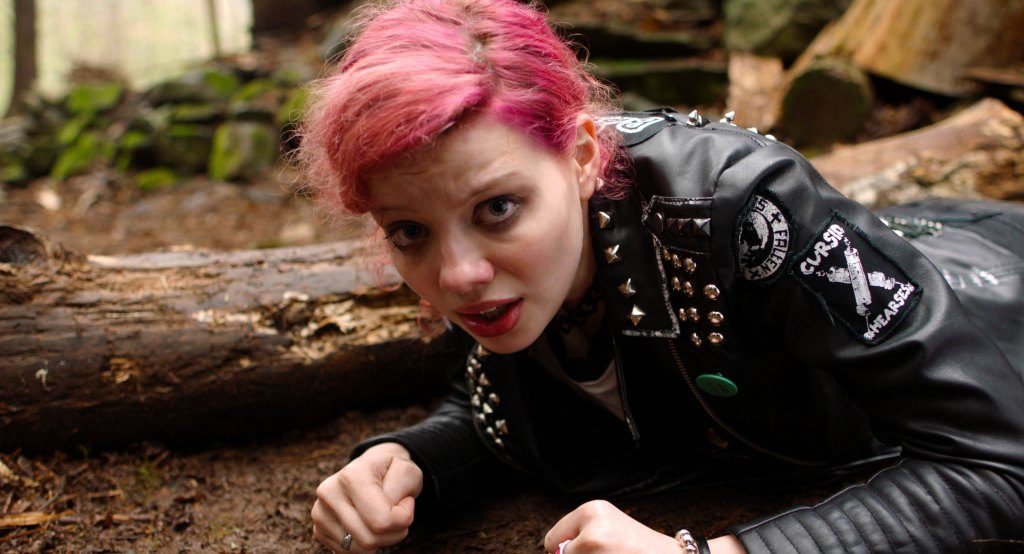 The morning after the east coast premiere at BUFF20, I had a conversation with director Jenn Wexler about her first feature film, The Ranger. We talked about punk kids, adventures in the woods, and how cell phones are rewiring our brains.

BOSTON HASSLE: I was at the screening last night, and it was awesome. Everyone was really amped. I really liked it, it kind of reminded me of Green Room. I like movies about dumb punks in the woods. Loved the animated credits sequences. How did that come together?

JW: That was this artist named Mr. Lobo. He and his partner Dixie not only did the opening credits sequence and main credits, they made all the patches and pins and stuff that the punks are wearing. They fucking owned that style. We made up fake bands for them. They worked closely with our costume designer, Samantha Hawkins, and her assistant, Sarah Lott. They crafted this really cool logos for fake bands.

JW: We had a different vibe for each of the punks. The long coat was a British Sid Vicious type look. Chelsea, in my mind, was more of a Joan Jett. Garth was rockabilly. Everyone was a different subculture.

BH: Did Lobo paint the van too?

JW: We had an art team. My only direction was “Lisa Frank.”

JW: Our production designer, Rebecca Brown, helped with that. Our executive producer, Darryl, brought all these guys in and we called them our “dream team.” Because they were just killing it.

BH: You filmed it out in New York?

JW: We filmed the party at this punk club in Brooklyn called Don Pedro, which closed like right after we shot in there. We shot all the woods stuff around Kingston, New York. Most of it takes place on Hunter Mountain. We had to hike the mountain to get to the top to shoot. We had to hike like two hours, it was too steep for cars. The crew was the best.

JW: Yeah, I work for a company called Glass Eye Pix. The guy in charge is Larry Fessenden. He’s a writer/director/producer/actor/everything. He plays the uncle in The Ranger. Every movie we make, we sit down and say, “Okay, what role is Larry going to play?” He’s like our uncle in real life, too.

I started out in marketing with Glass Eye Pix, but I was really interested in producing. They took me under their wing. My co-writer (Giaco Furino) and I were working on the script for The Ranger while I was producing some of these films. When the script was finally done, I showed it to Larry and then he was so supportive.

BH: It’s always so exciting to hear how these films come together. So you guys premiered at SXSW?

JW: It was insane. It was so fun. It was a week of pure insanity. They take over the whole city.

BH: So will your movie be getting picked up by a bigger distributor?

BH: Had you worked with any of the actors before?

JW: Just Larry. We were obsessed with Jeremy Holm and we wanted him so bad for the ranger. We sent the script to him and he clicked with it. He was the first person that we cast. Once we knew who the ranger was, we could think about who played the punks. That’s when things started moving. I met Chloe at SXSW when I saw The Transfiguration. It was cool meeting here the first year, then hanging out with her at SXSW this year.

BH: So you’re really deep into all the horror movies.

JW: Oh, I’m in so deep. I love Evil Dead, Nightmare on Elm Street. All the ’80s horror classics. The Ranger is my answer to Taryn, the punk girl in Nightmare on Elm Street 3. She finally gets to be punk in her dream, and right away Freddy kills her. I was always so mad about that. She was finally her own person, and Freddy just stabs her with needles. The Ranger was my payback.

I was ten years old when Scream came out. It was the first horror movie I ever saw. It really opened the gates for me. I Know What You Did Last Summer, all those late ’90s teen slasher movies, I was obsessed with. I was one person up until age 10, then I saw those movies and I became obsessed. They changed me.

BH: Did you see The Blackcoat’s Daughter?

JW: Loved that movie. His other movie [I Am the Pretty Thing That Lives in the House] is great too. Very restrained.

BH: Can you talk about creating the character of Chelsea a bit?

JW: Chloe and I sat down and talked about the character, filling out her life a bit. We brought a lot to Chelsea’s backstory that I wanted to keep ambiguous. Chloe’s eyes are amazing, I just wanted to keep looking at her. There’s so much happening behind her eyes.

JW: I really liked The Shape of Water and Get Out. It’s so cool that genre movies are ruling the Oscars.

BH: I watched a lot of older movies this year, to fill in a lot of blanks. Like I watched Carrie for the first time.

JW: Carrie’s the best. It’s fun when you’re making a movie and you can draw on your favorite films. You can say “we’re approaching it aesthetically like this, or this subgenre makes it like this.” For The Ranger, we focused on the outrageousness of ’80s punk movies, tonally and visually. Class of 1984, Return of the Living Dead, Repo Men, Suburbia, you know. Smithereens is a movie I love. It’s about a girl just going around New York trying to connect with people. It’s awesome. I love movies that feel like a snapshot of a certain time. That one feels like a snapshot of New York City in the early 1980s.

Another movie I was obsessed with was Habit, directed by Larry. It’s a vampire movie from the late ’90s, and it perfectly captures the East Village in the mid-’90s. It’s so good.

BH: There’s been such a rise in aesthetic-y horror movies lately. It Follows, The Witch, Under the Shadow…

JW: Under the Shadow is a fabulous movie that everyone should watch. There should be more movies like that.

Glass Eye Pix is really into using horror to say things about the world. Larry talks a lot about addiction in Habit. His movie, The Last Winter, is a horror movie about global warming.

BH: That’s why Get Out works so well.

JW: We played a movie last year here at BUFF called Most Beautiful Island. It’s got horror elements, but it’s really about the immigrant experience in New York City.

BH: I really liked the gay couple in The Ranger. That was nice to see on screen. Even though it’s a slasher film and you know what’s gonna happen.

JW: It was really important to Giaco and I to create these characters that weren’t just good or bad. They’re like your friends. You like your friends, but sometimes they bother you or annoy you. Obviously it’s kind of a bummer that there’s a thing about gay people being killed in horror movies, and I hate that, it’s obnoxious. But it’s a slasher movie, so people get killed. But along the way, I wanted them to be together.

BH: They didn’t get killed mid-kiss or anything. And they did some damage to the ranger. That guy’s face is so scary.

JW: Jeremy’s face is amazing and frightening at the same time. Having complicated characters was important to us. Chelsea is in between two worlds. She can’t quite figure out where she belongs. I identify way more with the punks because I am so scared of nature. On the shoot, people were getting ticks. There were bears and weird noises in the distance, it was scary. I was googling “How to keep bears at bay.” I just started playing my music really loud, just so the animals knew not to come near us.

BH: It’s funny you mention your phone, because the kids don’t have phones in the movie.

JW: We wanted to make this feel like a fairy tale. On set I used the term “’80s dreamland.” I hate cell phones. On the shoot, we didn’t really have service, and the producers were pissed they couldn’t answer emails. I was in heaven, we all got to be really focused on the movie and it was great. We’re all brainwashed by phones. We used to get bored, and that was good for the brain. Good to stare into nothingness. Anyone who takes out their phone during a movie is an asshole. Just watch a movie at home.

BH: Anything else you want to say about the movie?

JW: Really excited to be playing Boston Underground. Last night’s screening was really fun. We’re playing What the Fest in New York. Then Chattanooga Film Festival and Cinedelphia. I’m really excited for that, it’s in a mausoleum.