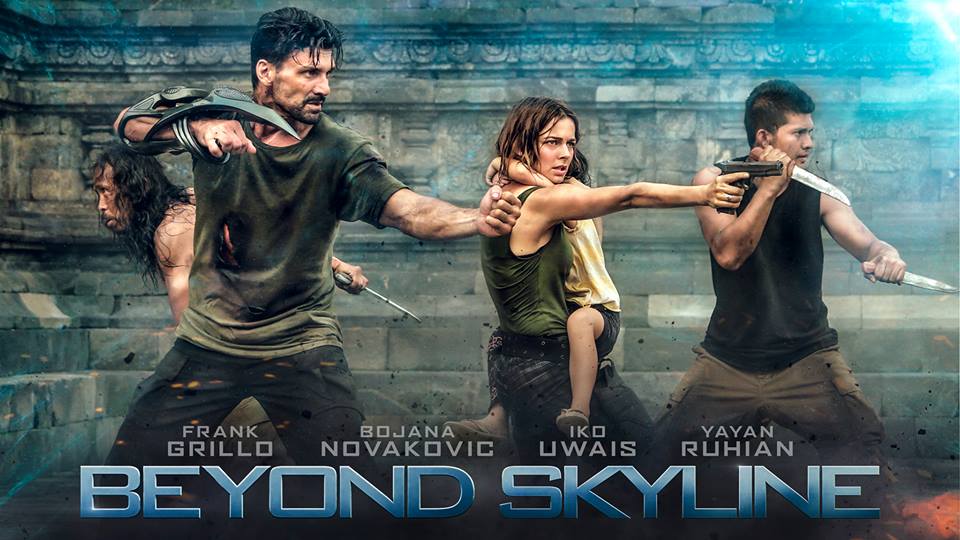 Last Monday, I had a lengthy conversation with director Liam O’Donnell about his new film Beyond Skyline, the follow up to 2010’s Skyline. We discussed practical effects vs. CGI designs, killer choreography, and what making a movie really takes.

BOSTON HASSLE: What was the first movie you got to work on? I saw you did visual effects.

LIAM O’DONNELL: The first one I did was Alien vs. Predator: Requiem. I graduated from BU and stuck around for the Red Sox winning the World Series, living at my parents’ house. After that, my older brother was doing a play in downtown LA, so I slept on his couch for two weeks. Then my friend Matthew Santoro and I moved into a cheap apartment and did odd jobs for six to eight months. We ended up meeting Greg and Colin Strause, video and commercial directors. They needed people to work on their scripts and their pitch projects, all while running their visual effects studio. They got AVP:R sent to them for their directorial debut. So we did the same kind of work, but on a movie. They would have me basically at the sounding board to oversee an action sequence while they were actually making the movie. You’re in the trailer, planning what’s going to happen next week. It was a great thing to be able to do when I was 24, and to learn how a movie is made from a front row seat apprenticeship.

As for Iron Man 2 – they had a joke sequence of video footage of other countries trying and failing to make their own Iron Man suits. Marvel sent the concept to a bunch of different VFX houses and kind of gave us creative license. I think they were expecting people to just do VFX tests, but we went out one weekend and shot everything. We wrote, directed, and shot four or five scenes, rushed it, and sent it back to Marvel. They said, “Oh, these are great! Let’s just lighten these and put them in the movie.”

LO: That was a great project. And it was about a year before working on Skyline, where we got used to the DIY aspect. We knew we had the right equipment and we saw what we had done in just a weekend. Let’s start shooting proof of concepts for the kinds of movies we want to make. And so we did the Skyline one in like a day. We had the general concept of people in a high-rise apartment, with a kind of Close Encounters thing. We didn’t even know if there would be aliens yet. It was just a good teaser.

LO: So we got that done in a day and showed it to some people, and they told us to write a script. So me and Joshua Cordes – he was actually an animator at the time – teamed up and tried writing something together. We wrote it in about a month, got a few notes, and we were basically filming right away. It was definitely a crazy ride. You hit that kind of thing early in your career and you think that’s what it’ll all be. But with the sequel, we got to savor it more and we knew it’s really hard to get a movie made. I was going to do everything I wanted to do with this one, and make it as big and crazy as I possibly can.

BH: Originally I wasn’t sure if Beyond Skyline was actually a sequel, because the original came out a while ago. The trailer for this made me think of The Purge movies, because those movies approach the same concept from different angles. And also Frank Grillo is in it.

LO: It’s definitely a bit of that. And I think that’s why Frank was drawn to it. He had just come off Purge: Anarchy. We had a long post on this movie, and we shot the bulk of it in 2015. I had thought it was going to be released late 2016, when we had a finished version of it. Test screenings kept asking “What happens next?” I overreacted to the first movie and I didn’t want to do any type of cliffhanger ending. But once you’re in sequel territory, people just expect sequels to continue. So I shot a bookend with a character in the future, and it sets things in a wild direction. That seemed to satisfy the test audiences.

We finished the movie early in the summer of 2017, and we just had to find a release date. It was a marathon, the exact opposite of the first one. For that we started filming February 2010 and it was in theaters by November 2010.

LO: It was insane. Especially for a thousand VFX shots. It was definitely a distorted view of how movies get made. For Beyond, everything went about the opposite. But it was all for the better for the end result. Very happy that we finally got it out.

BH: Yeah, you hate when things are sitting on the shelf for too long.

LO: I actually just got the blu-ray and put it next to the original and I thought, “This is crazy.” It’s still funny to me.

BH: Just having them out in the world.

LO: There’s always so much anxiety when a film goes to post. So much piracy, you have to show it to a lot of people, you have to send the links out… It’s an endless anxiety. So to have it just out, I no longer have that hanging over my head.

BH: What are some of the sci-fi movies that influenced Beyond Skyline?

LO: It wears a lot of influences on its sleeve. Not just sci-fi movies, lot of action movies of the ‘80s and ‘90s. It definitely has a Die Hard vibe. Aliens, Predator, T2. I wanted the hero to be a Joel Silver cop type. This is the guy you want to be on a subway car with if something bad happens. This guy is capable and doesn’t take any shit. A guy who could really get through the whole movie.

It got even crazier when we cast the back half of the movie and we got Iko Uwais and Yayan Ruhian from The Raid movies. Originally we wanted a real crazy war scene near the end. But when they were available, I was overjoyed that could even be a possibility. They said they would love to choreograph some fights for us. There weren’t any martial arts fights originally, so I said “Absolutely. You and Frank need to fight.” Frank was so excited, he had been attached to a Raid remake years before we started filming. I told him they needed to have a ‘get to know you’ fight and he said absolutely. That became our first few days of shooting.

They fight together in the last stand. And they sent me a video that’s ten solid minutes of fight choreography, this alien massacre. It was the coolest shit I’d ever seen, but I showed it to my alien suit guys and they said, “You didn’t tell us these suits were going to get the shit kicked out of them. They weren’t built for this, they’re like Predator suits.” So some of the stuff was obviously not possible. Frank couldn’t be picking up these aliens and throwing them into the temple walls. It all worked out in the end. It was a lot of fun. 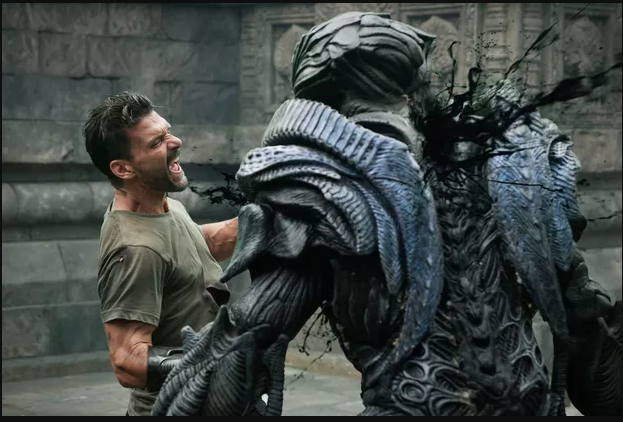 BH: I like that the aliens in your movie are actually guys in suits, not just CGI.

LO: At the end of the original, the alien was CGI and it was huge. I had problems with the design; it didn’t have eyes that could emote. It was too big to interact with people. I just thought it would be so much cooler to have a practical suit acting with everybody. So I got this extremely talented practical effects supervisor Alan Holt, and he put together a team for me. The practical effects community wants to make movies like this, and they don’t get a chance to anymore. If it’s a $200 million movie, they’re definitely doing things fully CG. It’s a shame, because there’s a perfectly great balance you can use. I only had enough money to use animation on the eyes. Everything on it is practical, but with LED eyes, with an iris system to show a sense of humanity so it would be connecting with the actors in the scenes. I love Marvel movies, and I think it’s become in vogue to trash on certain very popular blockbusters, but I do wish they would build more sets and use more practical creatures. I think Star Wars has done a better job of finding that balance lately.

BH: I agree, the ice foxes in Last Jedi were actually puppets.

LO: That’s crazy. I really enjoyed Thor: Ragnarok, but I felt like they could have built some of that bridge. It doesn’t all have to be CGI. I thought the forest they filmed in was beautiful, I wanted more of that Lord of the Rings mix. They’re finding it. Force Awakens and Last Jedi did a great job of mixing it all together, even at the highest budget level.

BH: Especially with a character like BB-8. It feels more organic that Oscar Isaac is addressing a puppet.

LO: I wanted to build a section of the squid alien’s face for Frank to put his foot on, but I got vetoed. Any time a hand touches CG it’s tricky, any contact point. Like Okja, that was some incredible artistry, but really expensive. I was always looking for places where I could use a practical effect for a contact point. One of the reasons the movie took so long in post was because of our sets we built in the spaceship. I call it the silo– it’s where all these people are hanging upside down. We couldn’t transport it, because it would have cost hundreds of thousands of dollars, so we had to build an eighteen-foot-tall green screen set. That became a total nightmare in post, just trying to figure out where things were. It’s my first movie working through these growing pains. Eventually, it did help with scope, because the original set was so narrow. It ended up working out. I was able to repurpose a cut fight scene with a different alien.

BH: What were your favorite movies of the past year?

LO: In the festival run, I saw Mom & Dad, with Nic Cage and Selma Blair. That was pretty fun to see in a packed festival screening. The Lost City of Z. It felt like a movie that was made in the 1970s. Totally authentic, felt like something I discovered at the back of the video store. It’s interesting to see filmmakers influenced outside of Spielberg and Lucas, their jungle adventure movies. I can’t avoid feeling the influence of Raiders or Temple of Doom. We even have a line about Temple of Doom in the film. Lost City feels very practical and real, filming on the Amazon. It just tapped into what I was experiencing at the time.

LO: It was the opportunity of a lifetime, to have all of this at my disposal for our sequel, and I’m excited it’s finally out there.

Beyond Skyline is available for digital download now on iTunes and Amazon.