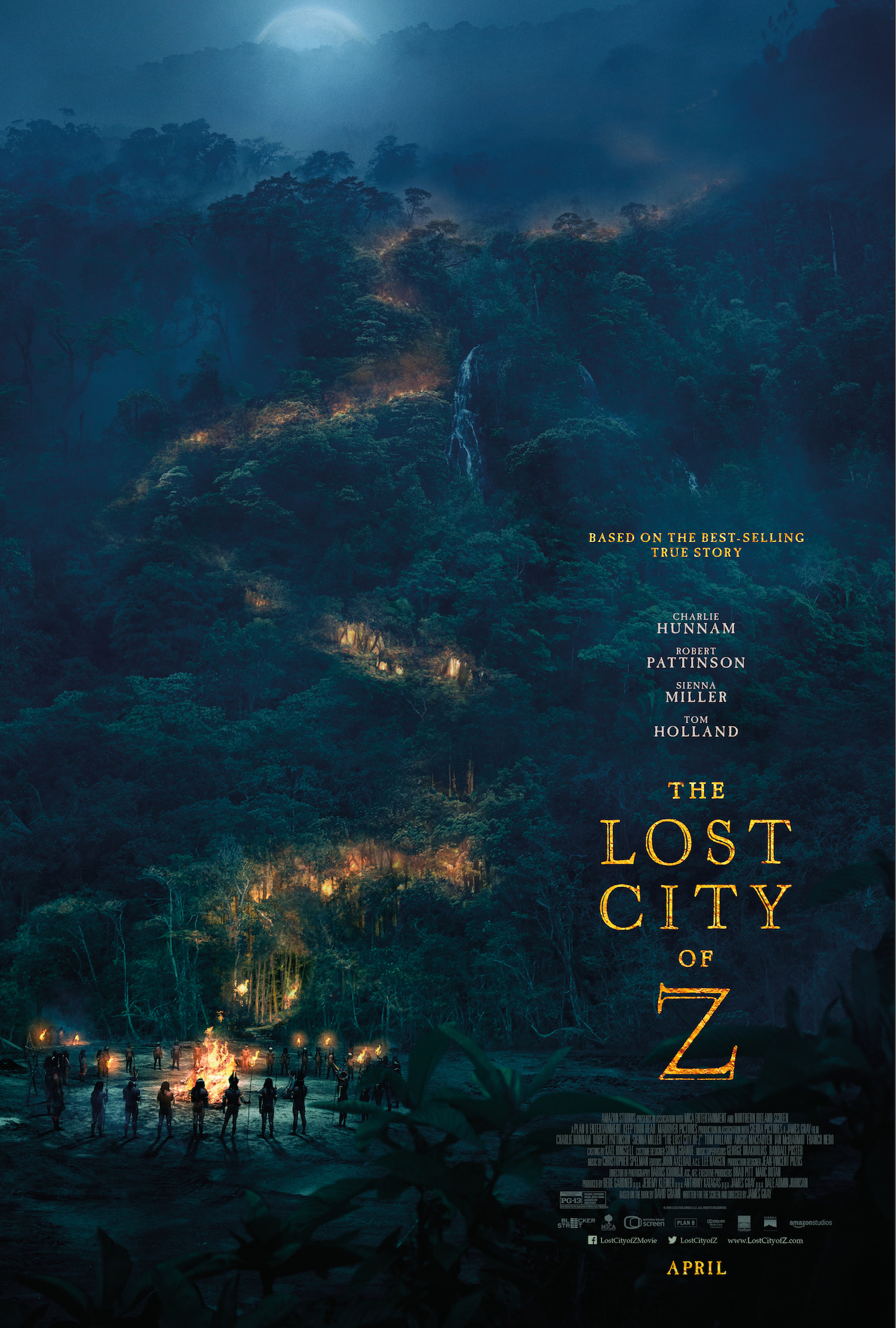 The Lost City of Z (pronounced as “zed” btw) is a weird, captivating little movie. It is lush and beautiful, captured perfectly on 35mm, and unassuming in its commitment to adventure cinema of old. Director James Gray and cinematographer Darius Khondji use the medium to the utmost advantage, bringing the audience into a world of light, shadow, and sound. Likewise, it is methodical in its pacing and execution, building steadily to a poignant, if not deeply affecting, conclusion. It’s classic in these ways, akin to movies like The African Queen and The Treasure of the Sierra Madre, or even Raiders of the Lost Ark.

The movie tells the true story of explorer Percy Fawcett, a man of low birth who instead found his rank and glory via war and exploration. Fawcett initially explores the Amazon jungle in order to survey the river, mapping a border and ending the near-warfare between Bolivia and Brazil—warfare that has been impeding the rubber trade. When the first exploration proves to be a success, Fawcett again decides to leave his wife and children behind in order to go on a second quest and then third to find the titular lost city of Z. Fawcett stresses repeatedly that these explorations are in order to prove the worth and humanity of the “savages” of South America, but deeper than that is an obsessive yearning to explore and discover.

There is an overall balancing act to the movie, highlighting Fawcett’s heroism and adventurous spirit while trying to apply a modern political eye in order to rectify or at least dig deeper than the traditional trappings of the genre; namely, its white-man focus. The movie highlights that Fawcett is more understanding of the natives: he learns their language and is vocal in his disagreement with the enslavement and exploitation of the South American people and their resources, even if the film never attempts to point out the inherent problems of his near-fetishistic obsession with “Amazonia.” Similarly, Fawcett is endlessly supportive of his independent wife, only so far as until she wishes to go with him on his second exploration. In an argument between the two, Fawcett refuses her joining him because she is a woman but, later, readily accepts his young son’s similar desire.

Despite these tangential focuses, the movie chooses to paint Fawcett as a man nobly driven by glory and adventure, instead of attempting to deeply explore or even indict the implicit sexism, racism, and colonialism of Fawcett’s pursuits. Characters, including his wife and the native tribes people, seem more like tools to demonstrate the filmmakers’ social awareness. It is this tepidness that unfortunately causes the whole thing to feel more superficial than it wants to be. The movie is able to approach something distinct and fascinating when it explores the dichotomy of the explorer archetype—that of Fawcett the noble explorer and that of Fawcett the modern-day conquistador, a word centered in violence even in early 20th century England. The World War I sequence is particularly engaging, as is the shadow cast by warfare throughout the whole movie. At one point, on the frontlines, the camera captures Fawcett, the sun behind him. He stands tall and manly, the quintessential soldier. A bomb explodes, knocking Fawcett to the ground and incapacitating him, almost a subtle critique of this masculine idea and it’s selfish, empty pursuits of glory. In this scene, and occasionally throughout the movie, there is an echo of the question posed to Fawcett of precisely how he’ll feel when he finds the lost city, and whether or not he can ever truly feel the glory he has idolized for so long.

Perhaps fittingly, I am reminded of The Wrestler when thinking of The Lost City of Z. Both attempted to understand men driven to self-destruction by their seemingly hollow quests for glory. Yet, where The Wrestler was able to craft depth and meaning, turning Mickey Rourke’s wrestler into an endlessly relatable tragic figure, The Lost City of Z chooses to remain surface level. Charlie Hunnam’s explorer can never seem human, because Fawcett remains forever noble and heroic in this movie. It rarely attempts to understand this man who searched without knowing precisely what he wanted to find, or needed to. Likewise, it rarely cared to move past its romantic vision in order to understand the deeper, colonialist implications of Fawcett’s pursuits.

Although not a complete success, the movie is stunning to watch and the skill of the cast is exceptional. Charlie Hunnam proves to be an actor steadily learning his abilities and mastering them; Robert Pattinson is unrecognizable behind a beard, yet commands his emotions with his eyes; Angus Macfayden gives perhaps the most memorable turn as a villain and could kill with a single glance; and finally, Sienna Miller turns even this small role into one of true emotion and excellence.

Admittedly, The Lost City of Z does linger on the mind, but perhaps more because of what it could have been if it had been braver in its convictions. At times, there is a taste of a masterpiece that dwelled in its dignified, old genre in order to say something enlightening about colonizing adventurers, and the all-too human obsession with capturing something as meaningless as glory, and as indefinable as wonder. It’s a shame we are only left with a taste.