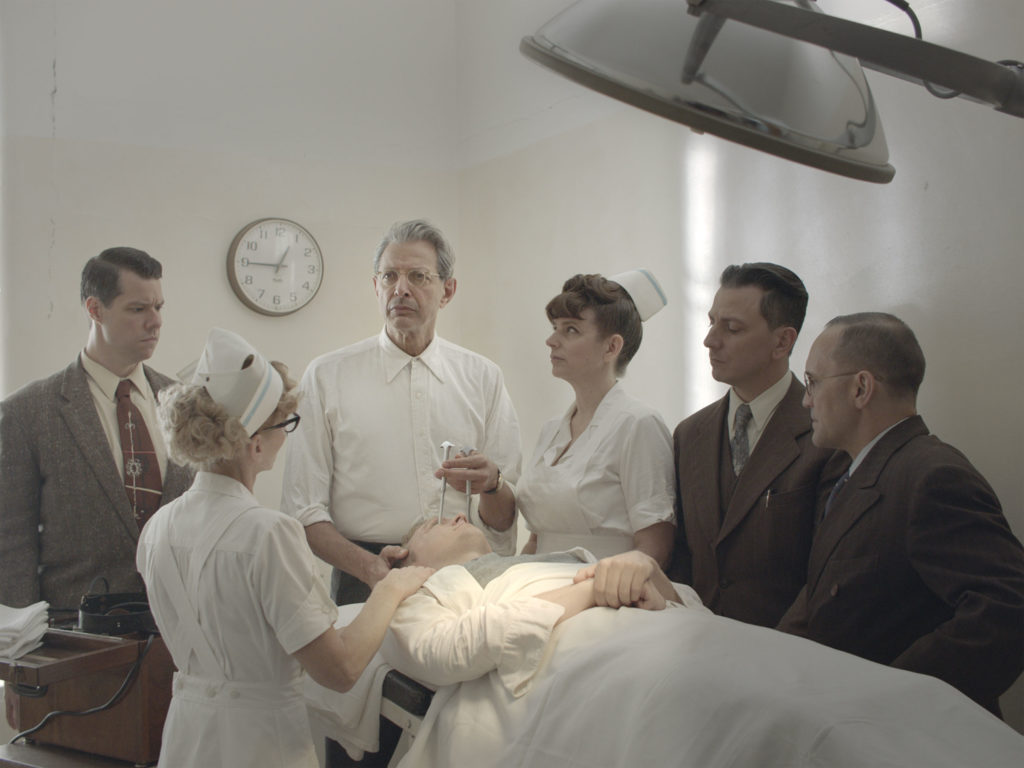 Let us take a moment to observe one of the oddest and least-heralded comeback stories in current cinema: the humble Academy ratio. Technically defined as a ratio of 1.37:1 (just a hair wider than a classic television screen), this boxy aspect ratio was the Hollywood industry standard from the early ‘30s to roughly the mid 1950s, when the studios switched en masse to widescreen as a way to outfox the encroaching TV menace. Of course, television would eventually convert to a widescreen standard as well, making the ratio doubly redundant. Yet, curiously, the last couple of years have seen an odd resurgence in the Academy ratio among the auteur set: it can be seen in Paul Schrader’s First Reformed and Jennifer Kent’s The Nightingale, as well as Robert Eggers’ upcoming The Lighthouse. While I hesitate to put words in the mouths of these filmmakers, it would seem that the restricted scope of the Academy ratio is becoming a go-to signifier for the claustrophobia of encroaching horror, whether that be loss of faith in uncertain times, the relentless patriarchal abuse of colonialism, or being stuck in a lighthouse with Willem Dafoe. When it feels like the walls are closing in, why not close in the frame as well?

The latest starring vehicle for the Academy ratio is The Mountain, by rising indie provocateur Rick Alverson. Like the films listed above, The Mountain isn’t quite a horror movie– but, like its brethren in aspect, its depiction of the human condition, as well as its flat-out oddness, will likely linger in your thoughts long after it ends.

Tye Sheridan stars as Andy, a taciturn young man who maintains an ice rink with his ex-figure skater father (the great Udo Kier, always welcome in a non-schlock context). His mother has been institutionalized, and while we never learn the specifics, it’s plain that the experience haunts him to his core (and that he perhaps shares some of her traits). When his father dies, Andy is adrift, until his estate sale attracts the dandyish Dr. Wallace Fiennes (the relentlessly wonderful Jeff Goldblum, here utilized to unnerving effect), who once treated his mother. Feinnes (who goes by Wally– “That’s what the ladies call me!”) doesn’t work at the hospital anymore for reasons never discussed, but rather travels the country administering lobotomies and electro-shock therapy, in between late-night carousing sessions in the nation’s most wood-panelled bars. Sensing a lost soul, Wally takes Andy on as his photographer, documenting his patients and operations, as well as transcribing his rambling notes and memoirs. In their travels, Andy becomes increasingly haunted by the patients’ loss of humanity (and by Wally’s seeming lack thereof). He also finds himself fascinated by Susan (Hannah Gross), a young patient of Wally’s who lives with her flamboyant poet father (Denis Lavant). As perhaps anyone would, Andy eventually reaches his breaking point– with suitably dire results. 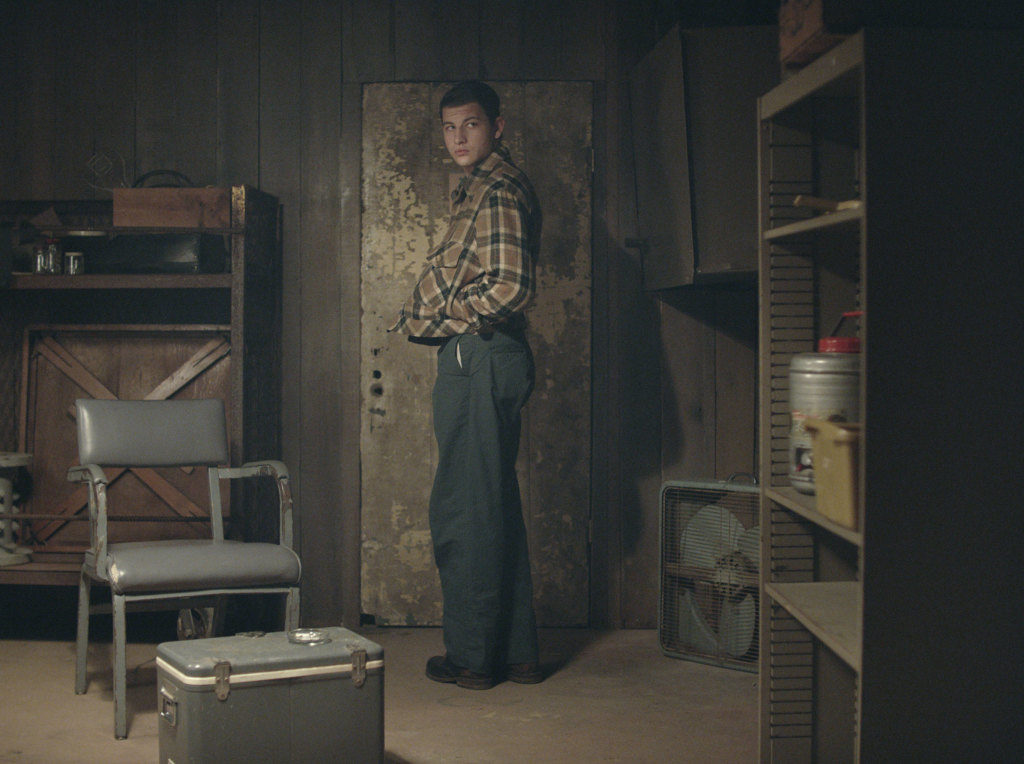 As is fitting for a film that spends much of its time in the corridors of mid-century mental hospitals, The Mountain takes a clinical, detached view of its subjects. With the dramatic exceptions of Goldblum and Lavant (more on each of them in a bit), most of the characters on screen, whether patients or “sane,” don’t say much, nor do they move far from their stations in the frame. In this way, Alverson and DP Lorenzo Hagerman cannily mimic the frame of Andy’s own polaroid, aided by the faded, ‘50s hues of salmon, turquoise, and beige (and wood panel– always with the wood panel). This remove is accentuated by the ethereal score by Daniel Lopatin, as well as the swirling, schmaltzy post-war pop constantly burbling up from diegetic radios and television sets. It’s one thing to make a film about lobotomies; it takes skill to make the audience feel like they’ve had one as well.

But I don’t mean to suggest that The Mountain is a drab film. On the contrary, its still camera and stifling locations only enhance the off-kilter, borderline psychedelic beauty of Alverson’s compositions. Rather than feeling constrained by his notoriously boxy aspect ratio, Alverson carefully arranges his subjects with unfailing symmetry, and surrounds them with what feels like the results of years of successful thrifting expeditions. Moreover, the scenes are so perfectly still and painstakingly mundane that you almost don’t notice when they drift into outright flights of fancy. Take, for example, the funeral scene, in which concentric circles of gaudily dressed figure skaters silently orbit a blown-up photo of Andy’s father (which is to say, again, a photo of UDO KIER), rhythmically and dispassionately flapping enormous pink fans. No one will ever stage a musical adaptation of Frederick Wiseman’s Titticut Follies, but if they did, it would look a lot like The Mountain.

And, of course, no film can be truly inert when it has Jeff Goldblum at its center. Alverson’s last two films have been (mostly) dramatic features starring figures primarily known for comedy: 2012’s The Comedy featured a breakout role for Tim Heidecker (of surrealist comedy duo Tim & Eric), while 2015’s Entertainment was a starring vehicle for anti-comedy icon Neil Hamburger. It’s probably not fair to place Goldblum in this category, but the bulk of his recent output, from The Grand Budapest Hotel to Thor: Ragnarok, has traded heavily on his affably quirky persona. Goldblum is just as charming and funny here as ever (it’s difficult not to smile as he flirts with a prospective date by attempting to tapdance down a stray bowling pin), but with a degree of unsettling menace not seen since The Fly. Wallace Fiennes, it should be noted, is a thinly veiled fictionalization of the real-life Dr. Walter Freeman. Like Dr. Fiennes, Dr. Freeman traveled the country with his lobotomy pick long after the practice was discredited, and like Fiennes he was a heavy drinker; in all, he is believed to be responsible for nearly 500 deaths. To see this character filtered through one of our most charming and beloved actors is both darkly hilarious and deeply chilling. Following one botched operation, Goldblum sighs, wipes his brow (leaving a bright red streak of blood), then shrugs and deadpans, “Welp, get her off the fucking table.” In researching this article, I was surprised to learn that Goldblum has never been nominated for an Oscar for acting*. In a just world, he could probably get a nod for this one, but I’m gonna go out on a limb and say no way in hell. 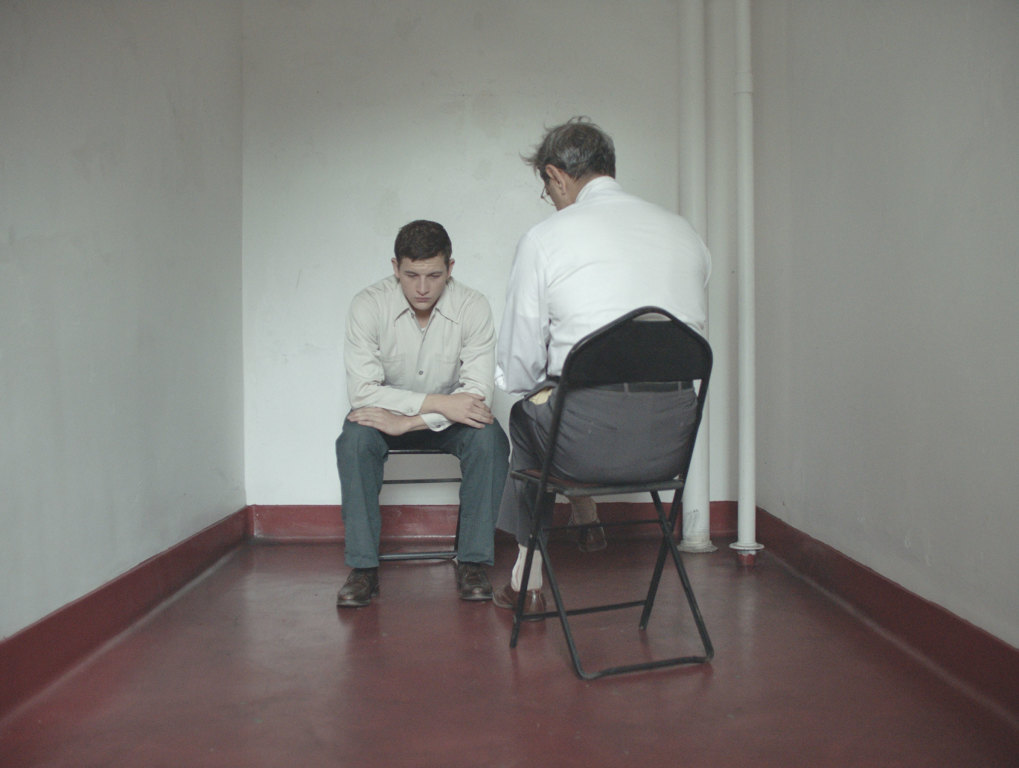 All that being said, The Mountain is not a film for all tastes, or even for most. Sheridan’s Andy might not say more than fifty words throughout the entire film, and while this is certainly in keeping with the film’s aesthetic, it can become enervating when the nominal protagonist has no visible emotion or motivation beyond the fog of confusion. On the opposite end of the spectrum, you have Denis Lavant. Lavant is a compelling presence (you may know him from his many collaborations with Leos Carax, or from Claire Denis’s modern classic Beau Travail), but his expansive style and florid dialogue (largely bellowed in a slurred mix of French and English) feel imported from a different movie– and, given the extent to which he dominates the third act, he very nearly turns The Mountain into one. The introduction of such a radically different character so late in the film is a bold choice, but I’m not entirely convinced it’s for the better.

Oh, also: this is a film about a drunken serial lobotomist. So, you know, if you’re looking for a pleasant time out at the movies, you may want to stick with The Farewell.

Still, The Mountain is far too entrancingly strange to be ignored, and its uncomfortable pleasures deserve to be experienced. Its mixture of beauty, ugliness, and disarming black humor is seductive, and it’s a treat to see Goldblum play a more sinister variant of his trademark persona. Like a box of photos from an actual 1950s insane asylum, you might feel bad about yourself for tittering, but you won’t be able to look away. And while the walls of the Academy ratio may be constricting, at least these ones are padded.

* – I specify “for acting” because Goldblum does have one nomination to his name: Best Live Action Short Film 1996, for something called “Little Surprises.” I have not seen this film, and it does not appear to live anywhere online, but consider me intrigued.