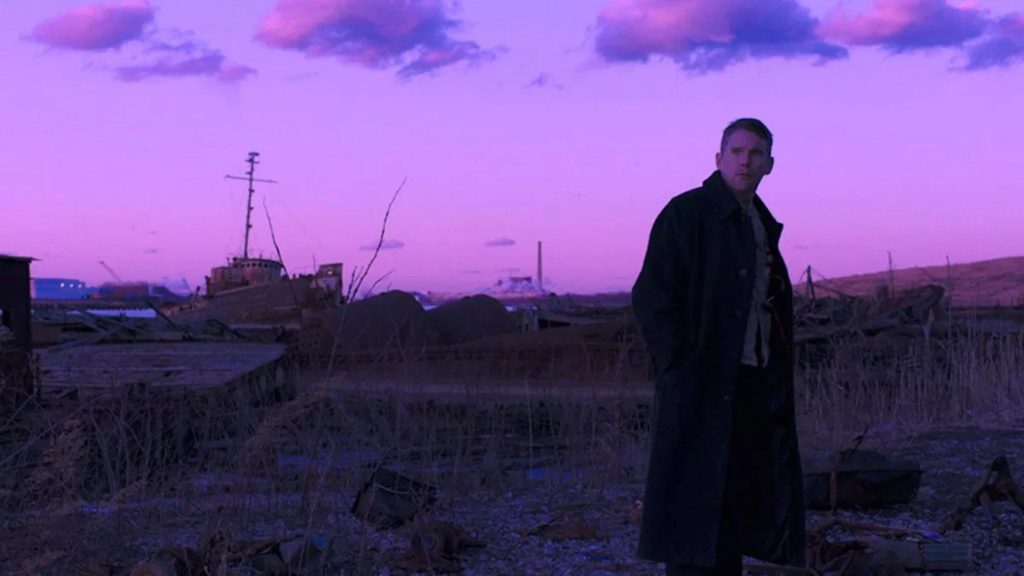 In the closing chapters of Easy Riders, Raging Bulls, his essential 1998 celebration/indictment of the 1970s’ “New Hollywood” generation, film journalist Peter Biskind writes with a sigh, “There is always the hope that one of the great directors of the ‘70s– an Altman, a Schrader, a Friedkin– will find the resources to make the masterpiece that has so far eluded him.” Reading from today’s vantage point, his words are remarkably prescient. Just three years after the book’s release, Robert Altman would direct Gosford Park, one of his most widely celebrated films, an Oscar nomination for Best Director (he lost to Ron Howard, but would receive an honorary award a few years later). William Friedkin, too, wound up regaining his groove in the new millennium; both Bug and Killer Joe are terrifically entertaining and harrowing pulp thrillers. While he failed to anticipate the return of Terrence Malick (whose Tree of Life is perhaps the one anointed “Masterpiece” to come out of the Easy Riders generation in the past two decades), Biskind shows a shrewd eye for filmmakers who may yet have something to say, even in the midst of their late ‘90s doldrums.

But what of the third member of that trifecta? Paul Schrader has always held a curious place in film history. The director of a number of critically and/or commercially successful films (including American Gigolo, Hardcore, and the ‘80s remake of Cat People), he is perhaps best known for the screenplays he’s written for other directors, particularly Martin Scorsese: he wrote Taxi Driver, adapted The Last Temptation of Christ, and contributed a key draft to Raging Bull. Yet, save for the reliably lurid 2002 Bob Crane biopic Auto Focus, Schrader hasn’t made much of a splash in recent years. But as Biskind was no doubt aware, it’s hard to count out a voice as singular as Schrader’s, and, with First Reformed, he’s finally joined his contemporaries’ return to form. 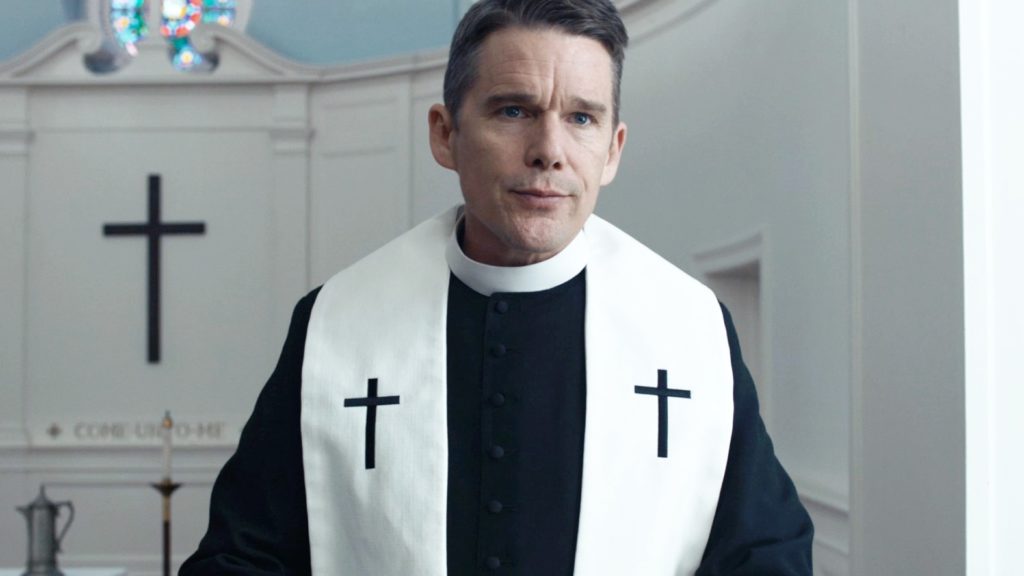 First Reformed stars Ethan Hawke as Reverend Toller, a former military chaplain whose life imploded with the death of his son in Iraq. Haunted, sickly, and battling an alcohol dependency, he’s nevertheless managed to get back on his feet as Father of a historic church in upstate New York. The church is gearing up for its 250th anniversary Reconsecration ceremony, backed by a celebrity megachurch preacher across town (played with charismatic gentility by Cedric “The Entertainer” Kyles), who in turn is funded in large part by chemical magnate Ed Bloq (Michael Gaston). His quiet existence is rocked, however, by a young parishioner (Amanda Seyfried), who asks him to counsel her husband, Michael (Philip Ettinger), an environmental activist battling demons of his own. Following a shocking confrontation, Toller finds himself increasingly troubled by Michael’s case, and soon finds himself going down a dark, dangerous path.

From the very first frame, Schrader reminds you that he is an auteur of discomfort. Actually, before the first frame: as the trailers ended and the film began, the projectionist at the Coolidge drew the curtains together, drawing attention to the fact that the entire film was shot in a claustrophobic 4:3 aspect ratio. Likewise, the austere, elegant opening credits roll in complete silence, with atmospheric sound gradually fading in. In fact, much of the film is deliberately quiet, with muted conversations playing out over rustling wind and passing cars, creating a slow-burning sense of dread which only really breaks with the introduction of the dark ambient score by Lustmord, nearly an hour in. It is perhaps no coincidence that the film’s trailers make it look like a Blumhouse-style horror movie. It isn’t, strictly speaking– there’s no demonic possession, no poltergeist, no haunted dolls to be seen– but it’s just as unsettling, and, in the end, terrifying. 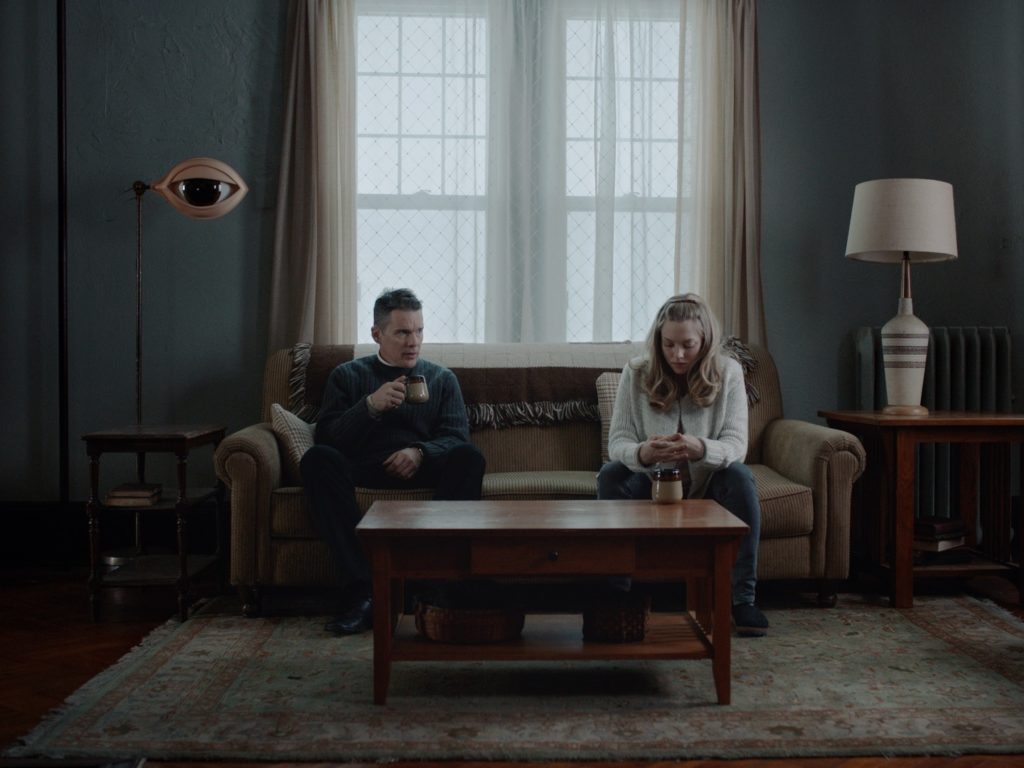 For anyone with a passing familiarity with Schrader’s work, it will be impossible to view First Reformed outside the filter of Taxi Driver. Like Robert De Niro’s Travis Bickle (or, for that matter, Rolling Thunder’s Charles Rane), Reverend Toller finds himself adrift, alienated by the world around him and haunted by his military experience. Both narrate their lives with a mixture of angst and detachment (Reverend Toller decides at the beginning of the film to keep a handwritten diary for twelve months as an “exercise”), and both find themselves inching toward an act of explosive violence. Around the third act, there are a handful of scenes which explicitly echo Taxi Driver in a way that sidles right up to the point of being cute, but which still retain the same sense of urgency. Bickle describes himself as “God’s lonely man”; for Toller, that sentiment is made literal.

But Reverend Toller isn’t Travis Bickle, at least at the outset. Where Bickle is clearly an unstable, lost soul to begin with, Toller begins his journey as a kind, articulate, soft spoken man whose existence, while humble, is not unsuccessful. The more obvious Bickle figure here is Michael, with his seething rage and threats of violence. But unlike Bickle, Michael’s struggle is presented as almost an afterthought; at one point, Michael’s rant about climate change is interrupted by Toller’s own dispassionate narration. It’s not that Toller doesn’t agree with Michael– he makes it clear from the outset that he does, and he ultimately goes several steps further– it’s just that it seems so obvious and trite in 2017. In the ‘70s, Travis Bickle was the bold voice of the seething counterculture; now, he’s just part of your Facebook feed.

While it feels reductive to call First Reformed “a Taxi Driver for the Trump era,” that does seem to be the central premise. While the Orange One is never mentioned by name, he haunts the film like a spectre, plainly the source of both Michael’s bottomless despair and Bloq’s snide, defensive bombast. At one point, Toller sits in on a youth group, where the mere mention of wealth inequality sets a Young Conservative into a frenzy of talking points, from “welfare queens” to “offending the Muslims.” The joke, if you can call it that, is that we’re now a world of Travis Bickles– a world run by Travis Bickles– to the point that even a gentle soul like Toller can’t help but bug out. 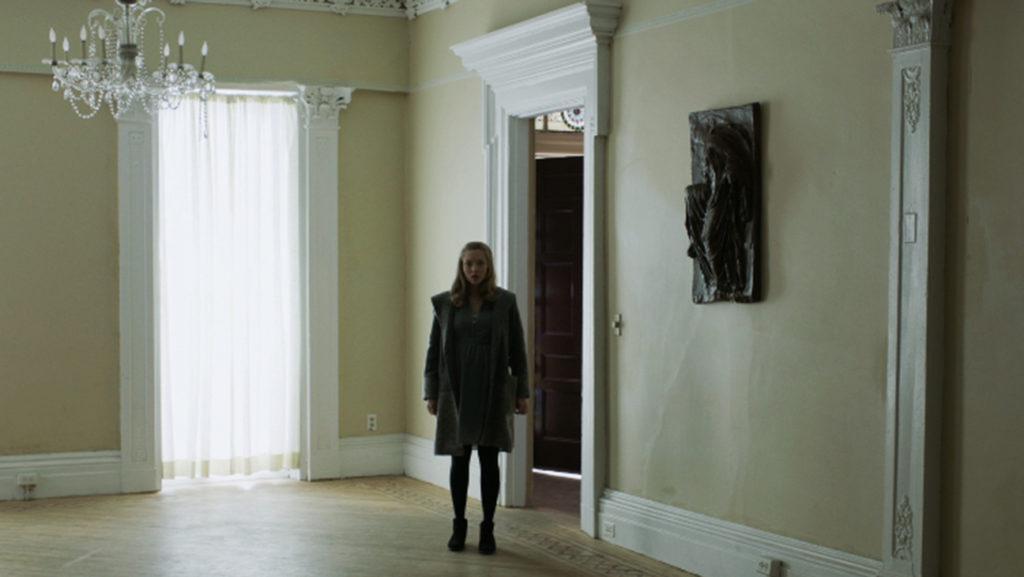 It should go without saying that First Reformed is not always an easy film to watch. Like all Schrader protagonists, Toller is presented warts and all; we’re led to sympathize with him, then forced to watch him at his worst, whether that’s telling off sympathetic friends, abusing his body, or listing slowly into outright madness. There’s a famous scene in Taxi Driver where the camera slowly pans away from De Niro as his love life goes up in flames; unlike Scorsese, Schrader keeps his camera firmly in place. Then there’s the ending, which, again like Taxi Driver, leaves us in a quizzical place; it is unclear about what we are meant to take away from the final scene, or even how much of that scene actually occurs at all. As I write this, it’s been about twelve hours since I exited the theater, and I’ve rolled around several possibilities in my head. All seem plausible, though whether any of them are satisfying will be up to the individual viewer.

But I have been thinking about it, and probably will continue to do so for quite some time, and whether you love it or hate it, I suspect you’ll do the same. Like the best of Schrader’s work, First Reformed will burrow under your skin, changing shape as you look at it in different lights. Perhaps part of the reason Schrader’s work in the past few decades hasn’t measured up to his heyday is that the world simply wasn’t sufficiently fucked up; the last time a Paul Schrader film felt so relevant, America was still reeling from Nixon, Manson, and Vietnam. For better or for worse, First Reformed is among the most vital films yet to come out of our current political moment. Heaven help us.