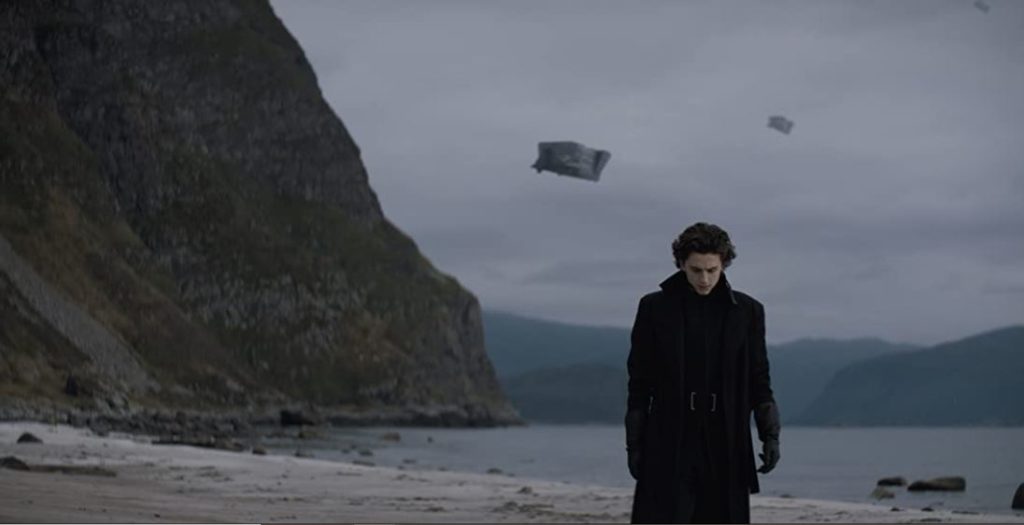 I feel like I committed a blasphemy by watching this Dune without any prior acquaintance with the novel or the David Lynch version. However, I am truly a Denis Villeneuve devotee, and this adaptation is on brand for Villeneuve’s recent engagement with reviving misunderstood sci-fi films from the ’80s. I saw Blade Runner 2049 in theaters as a double-feature with the 1982 film, and even as a fidgety, frequent-bathroom attendee-type theatregoer, I was completely enraptured. 2049 is a phenomenal update to the world; the neon-drenched futuristic backdrop of LA was as gorgeous as it needed to be, the renewed roles for replicants in the world still carried the philosophical flame from its predecessor, and the cyberpunk noir aesthetic hits just right for my taste.

It’s a new dawn. William Shatner has entered the final frontier. It seems logical that in the assembly line of moneymaking remakes, science-fiction movies are revisited for possible polishing with visual effects that were unfathomable before. Dune is another blockbuster shot from Villeneuve to fulfill how he envisioned this universe when he encountered the Frank Herbert novel, and his ballistics have never been defective.

The slow-burn sci-fi genre thrives again, and Dune certainly takes its time here. It’s slightly deceitfully known as Dune: Part One (hopefully, the second marketing cycle won’t be stretched out again). Nonetheless, the two and a half hours don’t feel like Earth time; each moment is taken up gratefully with plot momentum, cinematography (shockingly, not by Roger Deakins), and action. From the order of the Empire, House Atreides, headed by Duke Leto (Oscar Isaac), is assigned to take over melange harvesting at planet Arrakis. Melange, also known as spice, has multitude uses for humans: light-speed space travel, extended life expectancy, addictive narcotic (which explains the icy-blue pupils of the Fremen, natives of Arrakis). Though Leto feels like there’s a political trap, he brings his son Paul (Timothée Chalamet, who is best as thoughtful and broody) and Paul’s mother Lady Jessica (Rebecca Ferguson) in addition to Atreides’ combat masters, Gurney (Josh Brolin) and Duncan (Jason Momoa). Harvesting at the Arrakis deserts is far from safe; enormous sandworms that lurk under the dunes are attracted to rhythmic noises.

Paul carries a supernatural ability from his mother, who belongs to the female coven Bene Gesserit, and learns to hone the skill of The Voice (commanding someone to do something, which hypothetically could be done by anyone with the right attitude). His life is of an anomaly; the Bene Gesserit’s mission is to continue the sisterhood lineage and Lady Jessica’s choice to bear a son had made Paul’s membership application a little less shiny. However, Paul also has premonitions of himself at Arrakis, wandering canyon rocks with an unnamed figure (though to anyone who knows the story, it’s Chani, played by Zendaya) and leading the Fremen into battle. He is also recognized by Fremen strangers, as if he is re-living a state of de ja vu or a future that resembles a chess game with every move planned out.

The Fremen people; one of Paul’s dreams

Staying faithful to the story sequence (based on a cursory review of the 1984 film synopsis), this is one of Villeneuve’s most straightforward films. It’s also a very Villeneuve film. The clean precision of close-combat scenes are accompanied with holographic glitches (which is to assume that the fighter is wearing a body-shield) that remind one of Blade Runner 2049, while the orange-dyed skies of the desert resemble Incendiaries,or even some parts in Enemy. I could be the worst person to ask about the integrity of the story because I delightfully consumed everything that was put in front of me, so much so that I could joke about some things like I did about the kidney bean spaceships. There is a scene where Stellan Skarsgård, who plays Baron Vladimir of the insidious House of Harkonnen, very literally floats to a naked Oscar Isaac like a helium balloon, yet it still weighs of dreaded tension. My one strife may be the sound mixing, where the chaotic chorus of voices that accompany something bad happening seems to verge on parody and should definitively be replaced with that bass-groaning/polite cruiseship-honking/Annihilation–alien sound that seems to prevail in terrifying reveals.

At this point, I realize I’m not doing the greatest job of hitting all the points that happen in the film, especially since there is an all-star cast (I haven’t even touched Javier Bardem!) and House conflicts that run deep. For actual Dune fans, I couldn’t tell you if this hits the mark. I’m also not sure how this’ll take to the general crowd, who may be frustrated by Ferguson’s whispering or the cinched closure that reveals next to nothing about Paul’s dreams. But this film fills the year’s drought of high-budget sci-fi movies that retains the artistic vision of cinematic technology, and I cannot speak for anyone else but for me and myself when I say that I dig it. If we couldn’t handle Villeneuve at his Dune, then we don’t deserve him as his Arrival.

Now playing in theatres and on HBO Max (for a limited time)!