A hackneyed concept: An elderly scientist, Dr. [vaguely foreshadowed villainous name], collapses back in his spinning chair, made of black leather that’s been worn and torn from decades of long nights sitting in his government-sponsored lab, trying to solve a problem that’s plagued humankind. “It’s too late,” he whispers, his mouth dry, his portly face covered in cold sweat. “I’ve done something horrible.” His character arc ends in ironic demise.

In all seriousness, scientific horror can be unsettling in various dimensions. Is there anything more fearful than utilizing the world’s intellectual and technological assets to their maximum capacities and still being unable to solve a problem looming over our heads? If we’re staying topical, it’d be appropriate to dedicate a segment of Halloween movie marathons to Ecological Anxiety (I’d suggest The Day After Tomorrow, Snowpiercer, and Geostorm for appetizers).  We saw how last year’s Annihilation merged the inexplicable mutations of human and nature into ungodly sights, paving the characters’ endings into something semi-fantastical and almost quite believably real. And here we have Arrival, plucking the top nations at their wits’ end in an attempt to talk to aliens.

The film begins in the seemingly dead center of Louise Banks’ (Amy Adams) regular routine as a linguistics professor who is haunted by fragmented memories of her deceased daughter. Her life is interrupted when she is asked by the United States government to communicate with the aliens that had simultaneously arrived in twelve different locations around the world. Settled in their kidney bean spaceship fortresses, the aliens’ presence can be interpreted as a formidable threat or an act of neighborly welcoming, depending which country’s leader you ask. Louise and physicist Ian (Jeremy Renner) are summoned to Montana to correspond with an alien couplet, the US army, and the rest of the world to make sense of it all. 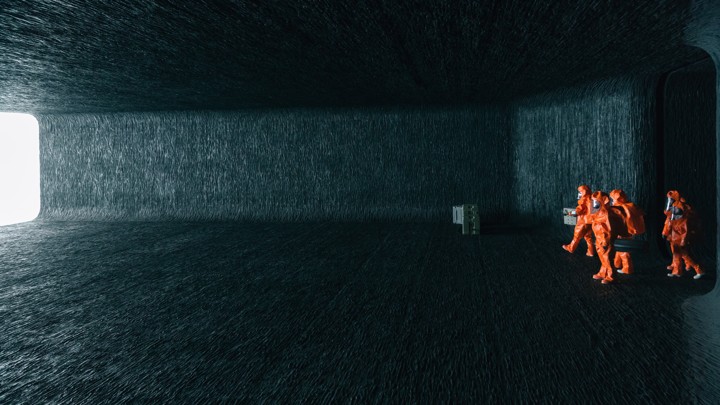 It’s misleading on my behalf to make you believe that Arrival showcases terror in the same way that Annihilation does, but both share a hazy sense of impeding doom, as if you can hear the pounding of drums in the room next door but you’re not sure what to make of it. Due to Denis Villeneuve’s bestowment of small pay-offs in the dialogue and the slow-burn imagery of otherworldliness, a curiosity is evoked in the audience for the cracks in the plotline. For example, in a quip-off, Louise argues that language is the “cornerstone of civilization,” while Ian stans for science. If you haven’t seen the movie yet, remember this line when they first meet in a helicopter.

The impact of Arrival boils to the intelligent deliverance of the Fear of the Unknown, as well as the believability of Louise Banks as the compassionate hero. A mother who lost her daughter to cancer, Louise brings a sort of renegade tenderness to a male-dominated atmosphere, fueled by the fact that she has already lost it all and has nothing else to fear. Without teetering over to the edge of desperation or embarrassment, Louise’s heartfelt determination to communicate with the aliens feels rewarding to the people out there who believe in kindness over confrontation. It also helps that Amy Adams, one of the pinnacles of A-List Hollywood humanism, was righteously cast as such a character. In 2013, when Villeneuve was directing another movie about a professor, Adams braved David O. Russell’s wrath for the second time (first being The Fighter) during the filming of American Hustle. To be able to describe the experience as horrible enough that she had to learn to not bring the negativity home to her daughter and still be the saving grace in the awards circuit, the world just makes a little more sense when Adams, and not the mad scientist, saves the day. After all, she was Kal-El’s humanistic attachment to Metropolis.