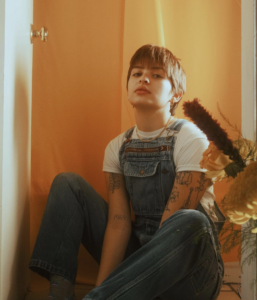 Heartbreakingly potent and full to the brim with wistful longing, Isa Ansin, known by their stage name, “chrysalis,” is in a constant state of metamorphosis. They dip into different pools of inspiration, constantly experimenting with the sound of their discography and simultaneously reinforcing their identity as a queer, trans person. Ansin’s music is a purely cathartic experience, bringing listeners through the ebb and flow of love and loss.

“Did I ask for too much?
Was my love not enough?
Was I crazy to think you and I were in sync?
Did you love me the same from the start to the end?
Or was it all fucked up from the very first day?
Did we do what was best or did we make a mistake?”

As the saying goes: “All good things must come to an end.” In this life, joy is at times fleeting. It comes into our lives for brief periods, only to depart when we least expect it, leaving us with fragmented memories of what once was. Chrysalis eloquently captures this plight in their debut EP, margarita sugar. Released March 19, 2022, the EP is a collection of songs overflowing with deep vulnerability, intense introspection and wistful reverie. 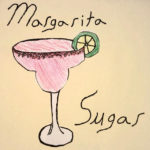 Pursuing music as a full-time career was never Ansin’s original plan. They spent the majority of their adolescence working toward a career in theatre, attending an arts high school and later pursuing a musical theatre degree for a semester in college. “The program I went to was very traditional in the sense that I didn’t really feel like there was much space for me as a trans person as a Latina. It was very hard,” they confess.

Their musical epiphany arrived during quarantine in 2020. They laugh, almost disbelievingly, as they recount their own Paul McCartney-esque “Let it Be” moment: “I had a dream a month into quarantine—one of my friends was singing to me in the dream. I woke up at 4 a.m. and remembered the song, […] so I got my voice memos and recorded . That was how I wrote my first song. It wasn’t very good, but I feel like it was a sign.”

Songwriting became their go-to artistic outlet, a safe space that they could always rely on to get their emotions across. They soon auditioned for Berklee College of Music in Boston after realizing that a career in theatre was not ultimately the route that they wanted to take.

Their pseudonym, “chrysalis” comes as a metaphor of sorts; “Chrysalis is the little little cocoon a butterfly is in before they’re butterflies,” they explain, “I really like the symbolism behind it, because another thing I struggled with a lot in my theater era was perfectionism. I was never enough. I would beat myself up like crazy trying to make my work as perfect as possible.” Ansin views the moniker as a reminder that it is okay to not have everything completely figured out—“there’s a lot of beauty in being somewhere in the middle and like not having to be 100% all of the time,” they assert.

Ansin’s EP, margarita sugar has found many listeners in their times of need. Love is a fragile, tender thing. This fragility is emphasized within each track of the EP, with stripped down guitar leads and Ansin’s signature glowy, warm vocals reminiscent of Lizzy McAlpine. The singer-songwriter’s natural knack for creating almost trance-inducing tunes helps to purvey their profound sense of loss.

The entire process of releasing an EP consisted of a lot of waiting—Ansin began writing the EP in September 2020, and completed the last track in June 2021. “It feels like it’s kind of some of my older work now […],” they admit, “I have so much more that I want to share with the world that I feel like it was holding me back. I’m really proud of the EP and some of the earlier stuff […]. I think it also highlights how I’ve grown as a songwriter.” The positive reception to their work allowed Ansin to feel a sense of deep relief, and they look forward to sharing more of themselves with listeners.

Through chrysalis, Ansin can be the representation that they never really had growing up. To have an impact on others with the same experiences is all that they could ever ask for—“To be able to know that I had that kind of impact on somebody else through me just existing” is one of the best rewards. Giving fellow queer people a safe space to be themselves is the motivation behind their art. “The biggest compliment you can give me, to tell me that you see parts of yourself in my music. Especially when it comes from fellow queer people—that means I’m doing my job right, that is success to me,” they say.

Writing music has also benefited Ansin’s own experiences; “It has made me feel more accepting of my queerness when it comes to being an artist, because before I was a songwriter, my queerness and my artistry were very separate,” they recall, “I had to put it away for a little bit, and now […] this is a part of me, it’s a beautiful part of me, and it deserves to live in my music, it deserves a space.”

Ansin has a passion for helping others and lifting them up, especially when it comes to the LGBTQIA+ community. They regularly donate to mutual aid funds by exploring their other creative passions: painting and patch work. “One great thing about painting and patch working that I found is that I don’t have to be good at something to enjoy it. It also has importance and meaning even though it’s not going to be a career,” they say. They sell handmade designs via their Instagram account, @shirts4mutualaid. “My patch working intersects with my music,” they note, “To be able to make stuff where some of the profit goes toward trans community members who need it—my music serves the same purpose; it’s for me, but it’s also for for you fellow queer people to see yourself.”

Ansin is forever in a stage of metamorphosis, helping others to become the beautiful butterflies they were meant to be along the way. Ansin’s margarita sugar proves that it is better to have loved than not loved at all. And while love might hurt and leave us all with scars, there’s nothing more comforting than knowing we are not alone.

Ansin is busy working on new music with their band, and they have several shows coming up in the Boston area: one on April 29, at The Tourist Trap and one on April 30, at Brinstar. If you are looking for a little more chrysalis in the meantime, you can follow them on Instagram and TikTok, and support them by streaming their music via Spotify or Apple Music.