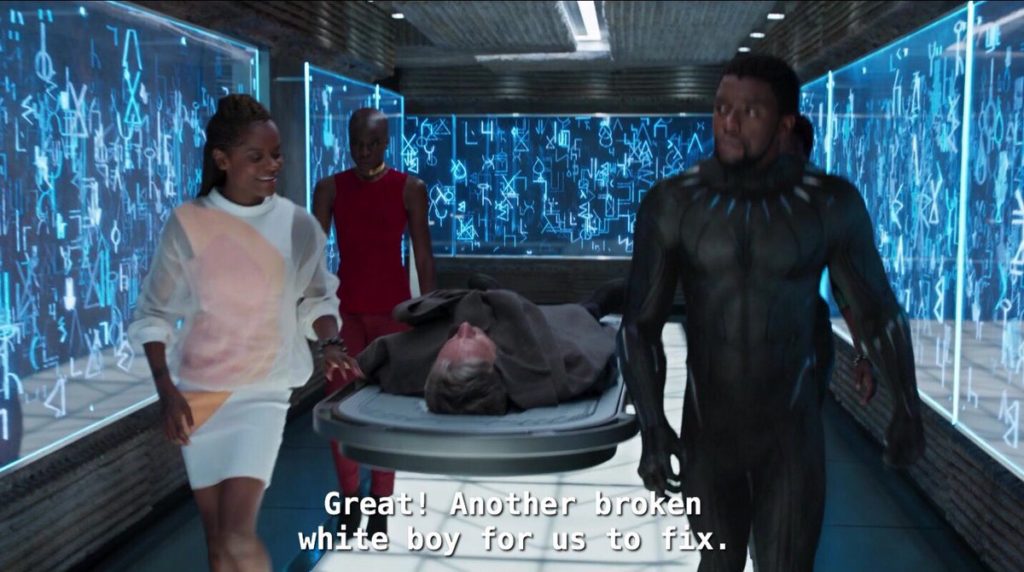 A great line of dialogue is like a pocket knife: you can tuck it away in your back pocket, waiting to deploy it when you need it the most (though, sadly, most screenplays don’t yet include removable toothpicks). Below are some of our favorite snappy lines (or, in one case, scenes of dialogue) we’ll be carrying around for years to come.

ANNA HOANG
“Great, another broken white boy for us to fix.” – Shuri (Letitia Wright) about Agent Ross (Martin Freeman), Black Panther. When I look back, I’m in awe that Ryan Coogler was able to fit such high-tier quotability in between themes that are light years beyond his film’s MCU mass-produced brethren. There are a lot of great moments, but this one can shame any future superhero tale that’s gonna put a POC as the benevolent secondary character that suffers for White Man’s Growth.

OSCAR GOFF
I’m not going to get into the plot of Sorry to Bother You, the astounding directorial debut of Coup frontman Boots Riley; for one thing, it would be next to impossible, and its big third-act reveal should preferably be approached as blindly as possible. But I will say that, despite its frequent forays into jet-black absurdity and sci-fi surrealism, the core of Riley’s film speaks a lot of truth about modern American life. There’s one line in particular, spoken by Steven Yuen’s Squeeze in the middle of the film’s most bonkers stretch, that’s stuck with me: “We all give a fuck, but don’t know how to give it… If you get shown a problem, but don’t see a way you can have control over it, you just decide to get used to the problem.” It’s a shatteringly insightful sentiment for today’s outrage-exhausted climate; that Riley completed the screenplay six years ago is both doubly impressive and deeply depressing.

KYLE BRUNET
Mandy is a movie of little dialogue, but director Panos Cosmatos makes up for it with short spurts of exposition which somehow become the weirdest scenes in an already weird movie. More specifically, when Cosmatos decides to focus on our antagonist, Jeremiah Sand, and his batshit crazy plans.SPOILERS! After kidnapping and drugging the titular character Mandy Bloom with a hard dose of LSD, Sand goes off on a tangent focusing on his music, his religion, and his message, as he tries to recruit the innocent Mandy into his sick cult. As his voice drones on about life and religion, his face starts to fade and blend into Mandy’s and back again, almost inducing a trip for the audience themselves. Look, I don’t remember much of what Jeremiah was saying, but the way his voice blends with his own music and gets under the audience’s skin is the most memorable scene of dialogue this year. This is exposition done right! 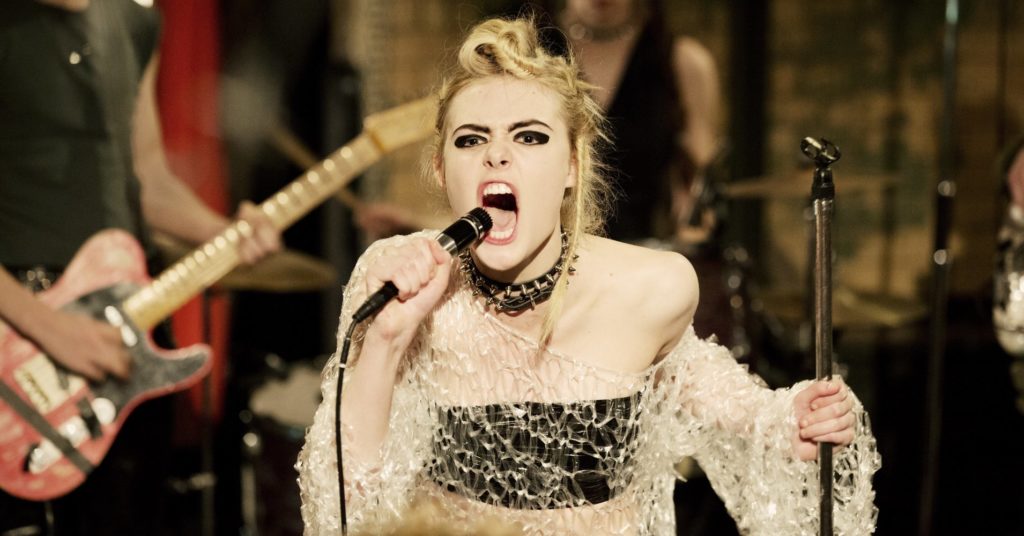 NICOLA McCAFFERTY
How to Talk to Girls at Parties didn’t quite deliver on the 1977 UK punk scene-meets-alien invasion promise of the premise, but it undoubtedly takes the cake for me for the best line in a movie this year. Allow me to set the scene: the line is delivered by the radiant Elle Fanning (playing an alien named Zan) at a hypnotically strange and colorful house party hosted by a group of extraterrestrials. Zan belongs to a clan of aliens dressed in matching yellow hues and seems to have a bit of a nonconformist streak, which leads her to run away from her sunshine-clad family after a disagreement. In a contemplation of rebellion familiar to anyone who was once a teenager, she brings a pair of scissors up to her latex dress. Enter Enn (short for Henry), the somewhat lackluster protagonist, who spots her while bumbling about the house. He recognizes her destructive impulse because, well, he’s a punk. After explaining the concept of punk to her , Zan uses the scissors to chop off the bottom of her dress. “Now that’s punk,” says Enn, visibly aroused. And then it happens. The best line of the year. With all the naïveté of an alien assuming a human form on Earth who has just learned about one of the greatest music movements of our time, Zan matter-of-factly delivers the instantly classic phrase, “Do more punk to me.” Same, Zan. Same. (It is worth noting, however, that Zan actually did punk to herself. And that, my friends, is what’s wrong with this movie in a nutshell.)

KYLE AMATO
“I like it when she puts her tongue inside of me.” This feels self-explanatory. Please see The Favourite