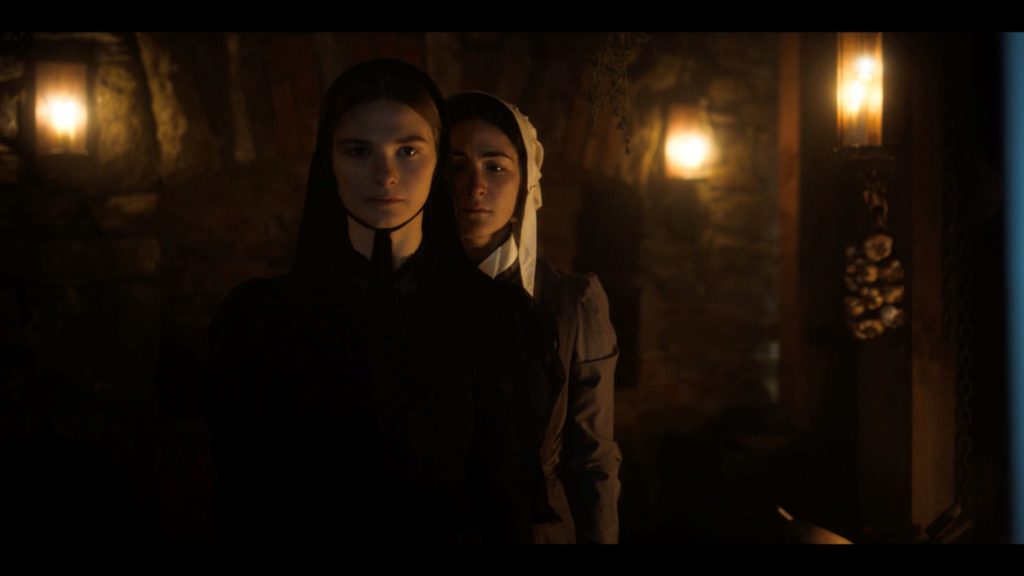 The problem with witch hunt movies is that, in reality, few historical witch hunts involved actual witches. The horror of Salem isn’t that it was home to witches, but that it was home to religious zealots who punished and scapegoated women by publicly declaring them in league with the devil. For centuries, allegations of witchcraft have been used to silence women who live outside the established patriarchal norm, whether via unconventional religious beliefs or unpopular lifestyle choices. There are certainly plenty of movies to be made about this, but they’re tough to square with the supernatural spookery that is expected when one sells a movie about witches. The Last Thing Mary Saw goes about as far as it can in showing the truth about witchcraft hysteria while still delivering a “witch movie,” and while the resulting film could probably stand to be a little more dynamic, it is a commendably soulful entry in the genre.

Set in upstate New York in 1843, the film starts in media res: young Mary (Stefanie Scott) is being interrogated by a local magistrate, a blindfold covering her still-bloody eyes. Mary, it seems, had been the subject of abuse from her puritanical family thanks to her illicit affair with housemaid Eleanor (Orphan’s Isabelle Fuhrman). Mary and Eleanor are in love, and no amount of draconian punishment or reciting the Lord’s Prayer can undo what they know in their hearts, but the reality of Mary’s family– to say nothing of society as a whole in the nineteenth century– leaves them with only so many options. Desperate, Mary turns to a mysterious book in her father’s collection which seems to contain a series of occult spells which may hold the key to their freedom. Their deadly plan requires provisions, however, which leads them to consult a mysterious, disfigured drifter (Rory Culkin). All of this, meanwhile, unfolds under the watchful eye of the family matriarch (Judith Roberts), who may or may not know more than she lets on.

The Last Thing Mary Saw comes about as close as I’ve seen any horror movie come to hew to the reality of the witch hunting era. There is witchcraft, of course– as I said, there probably has to be– but the majority of the film is devoted to the doomed, tender love story between these two young women. With a couple of coats of paint, Mary could fall into the same Period Lesbian canon as Portrait of a Lady on Fire or Ammonite. Even without the framing device, we know instinctively that there will be no happy ending for these two, but there’s still a genuine sweetness to their scenes together. In one particularly affecting scene, the girls simply lie on the floor of the chicken coop (the one space to afford them privacy), looking into each other’s eyes, winking and smiling. It’s a nice, quiet moment in a genre not particularly known for those.

Like most films about witchcraft in the past few years, Mary clearly strives for the austerity and period-appropriate solemnity of Robert Eggers’ The Witch. Unfortunately, it is somewhat hamstrung in this regard by its budget. Director Edoardo Vitaletti lacks the formal master of Eggers, and the cast, while game, is never quite as sure on their feet around the occasionally archaic material as, say, Anya Taylor-Joy or Ralph Ineson. The mood is clearly meant to evoke the creeping dread of puritan paranoia, but the stuffy confines of the set occasionally give the proceedings the air of a History Channel reenactment. In its effort to nail the period setting, the film seems to keep itself from stretching its legs. 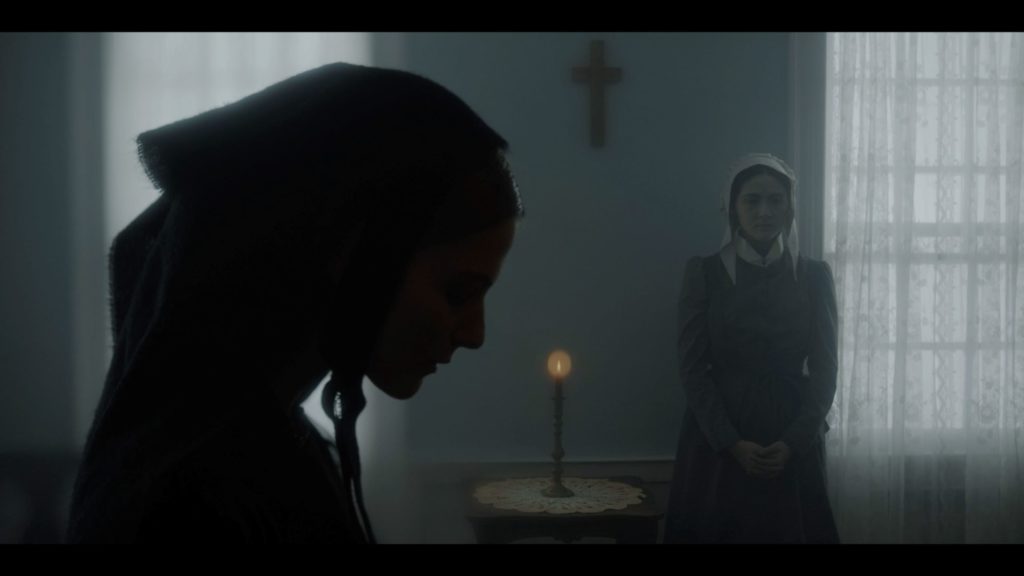 Still, taken on its own terms, there is plenty to recommend The Last Thing Mary Saw. Fuhrman is quite good as Eleanor, here using her naturally expressive face to radiate good instead of evil (particularly during stretches in which she can only communicate with her eyes). Even better is Culkin, who is shaping up to be one of our very best dead-eyed creeps. As in 2019’s Lords of Chaos (in which he plays the late Norwegian heavy metal great Euronymous), Culkin does little to modulate his cadence to the setting, making his character seem even more like a malevolent intruder. Then there’s Roberts, as perhaps the most sinister character in a family full of them. Though not a household name, midnight movie buffs may recognize her as Henry Spencer’s seductive neighbor in David Lynch’s Eraserhead. As in that film, Vitaletti casts her for her striking, subtly off-putting looks, and she knows how to use them. When Roberts observes the proceedings of any given scene, it’s difficult to know what she’s thinking, but you can tell it’s not good.

And there are a handful of scenes which are truly devilish in their simplicity. Take, for example, a funeral scene in which the mourners realize, one by one, that the pointer finger of the deceased won’t stop wriggling. Later, when Mary and Eleanor’s plan comes to its fruition, the effect is visceral in a way that left me truly taken aback. These scenes, and others like them, prove what a low-budget filmmaker can accomplish when they take the time to fully craft scares with the tools available to them.

Is The Last Thing Mary Saw a great film? Probably not; it, along with films like The Curse of Audrey Earnshaw and The Banishing, represents the mean average of contemporary horror. But this in itself is a great indication of the highs at which the genre currently finds itself. It’s not a new horror classic, but it’s a good little horror film, and as someone who came of horror-watching age in the bleak days between Scream and Saw I don’t take that for granted. We’re at a point where “average” is still “pretty good,” and I for one savor that.