The familiar childhood rhyme “She sells seashells by the seashore” was supposedly inspired by Victorian paleontologist Mary Anning, the subject of Francis Lee’s sophomore feature, Ammonite.

Anning, played by Kate Winslet, is the “presiding deity of Lyme.” She scours the Dorset seashore for fossils and brings them back to her shop to clean and sell. She treats them with more care than she does her fellow townspeople — she isn’t well-known for her genial demeanor. Her mother (Gemma Jones), who still mourns the loss of her eight other children, is a sickly woman who offers little companionship. Picture Ethan Frome levels of dreary and lonely.

Anning isn’t able to play with the big boys; the Geological Society of London doesn’t allow her membership due to her gender. Yet they still admire her work, as evidenced by a visit from Roderick Murchison (James McArdle), a fellow scientist. Murchison requests a day examining and collecting fossils with Anning, which she begrudgingly accepts for a fee.

Murchison ultimately has a much bigger request for Anning. He asks her to take care of his wife, Charlotte (Saoirse Ronan), who is still reeling from the recent loss of their child. Diagnosed with melancholia (a classic Victorian ailment), Charlotte will convalesce by the sea (a classic Victorian cure) as she assists Anning, and her husband will go off on his own four-week adventure.

Draped in black from head-to-toe, Charlotte follows Anning around like a wraith. She’s hardly a willing participant. Despite the rocky beginning — please excuse the pun — they eventually warm up to each other, in more ways than one. 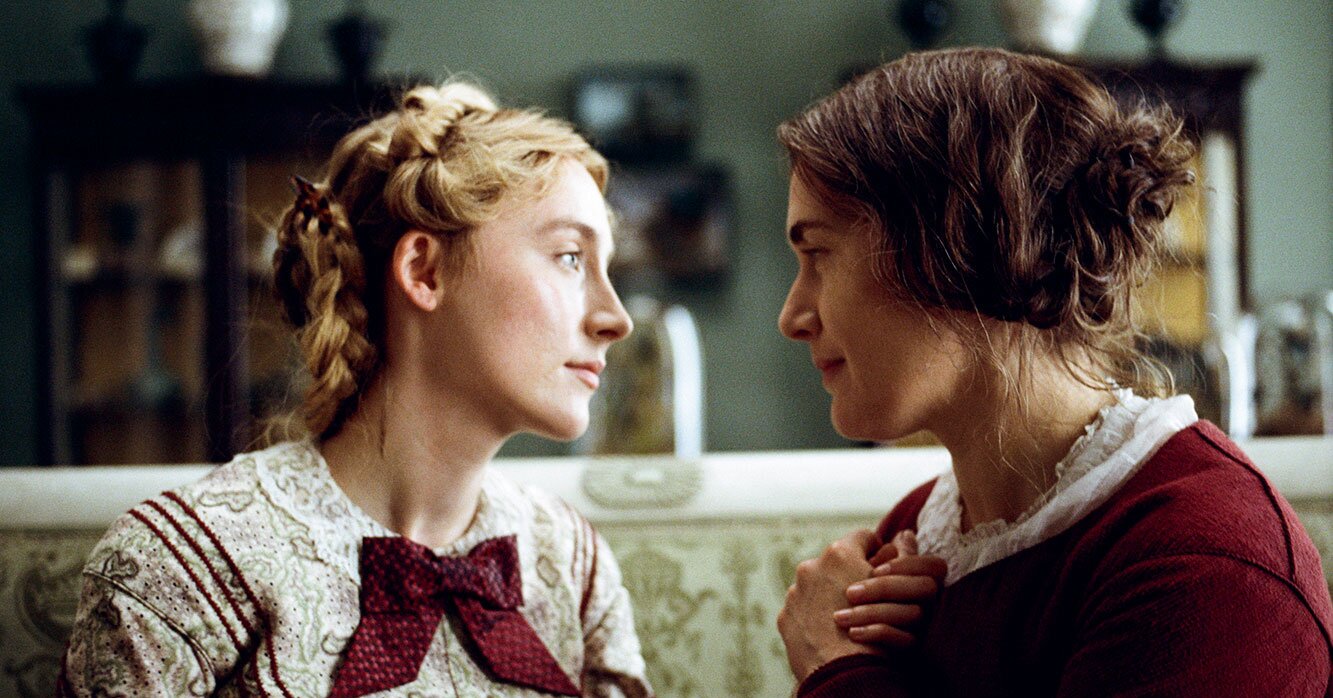 There’s something to be said about a love that emerges from the depths of despair, and how those involved will use it as a lifeboat to reach shore. Mary and Charlotte’s love comes from different places, but they find solace in one another. Where it goes from there is up to the characters, though the results may be frustrating to some viewers.

Lee’s second feature film follows his first movie, God’s Own Country, one of my favorite films. The lead characters of the two films share similarities: plagued by loneliness, isolation, and the brutality of physical labor for survival. They become as rough as the landscape they tend to every day. When their love interests enter their gray worlds, only then do they begin to break out of their tough exteriors.

Lee is a master of showing rather than telling. Both God’s Own Country and Ammonite have sparse dialogue, but the plot doesn’t suffer because of it. Rather, the audience focuses on the nuanced details, like stolen glances and secret hand touches. Though Ronan is an excellent actress (and one of my personal favorites), Winslet really steals the show here.

It’s the perfect film to watch on a gray November day.