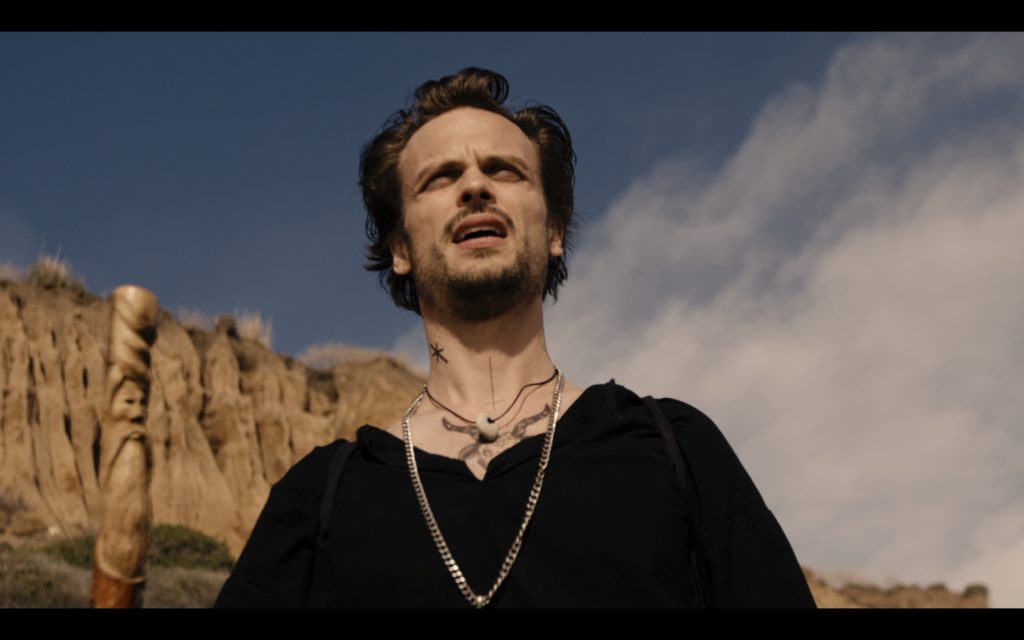 For a man who specializes in snotty, abrasive humor, Richard Bates, Jr., has become something of a comforting presence for me. Bates may not be a household name, but his films– caustic little satires like Trash Fire and Tone-Deaf*– will no doubt be familiar to those who make a yearly ritual out of the Boston Underground Film Festival. It is perhaps because of this association that I’ve come to associate Bates’ films with the thrill of discovery that comes with covering a film festival. With their scrappy attitude and anything-goes humor, they neatly sum up the DIY ethos of an underground or alternative film festival.

It feels appropriate, then, that I will be kicking off my second year covering Montreal’s (still virtual) Fantasia Festival with Bates’ latest offering. Like his previous films, King Knight tells an often raunchy, always silly story about some dimwitted, self-absorbed individuals– but it ventures into territory I didn’t expect.

King Knight tells the story of Thorn (Bates regular Matthew Gray Gubler), a practicing Wiccan living somewhere around Laurel Canyon. Thorn lives a modest but idyllic existence with his partner Willow (Angela Sarafyan), selling artisanal birdbaths on Etsy and leading his coven of fellow neurotic pagans (including Nelson Franklin and former MTV personality Andy Milonakis). What the coven doesn’t realize is that Thorn harbors a “dark” secret: before he was Thorn, he was young Thornton Adams– class president, prom king, and lacrosse player extraordinaire. Facing banishment from the dark arts and a personal existential crisis, Thorn embarks on a spiritual journey to find himself, make peace with his WASPy mother (scream queen Barbara Crampton), and “come out of the broom closet” to his yuppie classmates at his 20th high school reunion.

As in Bates’ earlier films, the characters in King Knight are across-the-board ridiculous. These modern-day Satanists certainly give him no shortage of fodder: with their self-important glowers and vampiric fashion sense, there’s a good chance you’ll start laughing before they even open their mouths. Their rituals are gloriously silly– imagine a low-rent influencer’s approximation of the festivities from Midsommar, with skeleton chalices straight off the rack from Spirit Halloween (fans of idiosyncratic holiday movies can finally cross Beltane off their lists). They say that, for comedy to work, the characters need to be unaware that they’re in a comedy, and these poe-faced wannabe necromancers truly believe themselves to represent the forces of darkness, even as they descend into bickering over prospective dog names (“You can’t name it ‘Women’s Rights!’”) and the filmography of Juliette Binoche.

Yet while this cast of characters are every bit the caricatures as Amanda Crew’s vapid millennial final girl in Tone-Deaf, there is a surprising amount of heart to the proceedings. For all their quirks and neuroses, there is a sense that Bates genuinely cares about these characters: no one here is truly unlikable, and by the end you’ll find yourself rooting for these LaVeyan misfits. There’s a wonderful Addams Family silliness to their perfectly inverted values, especially in their outrage at Thorn’s Abercrombie-tinged past (“You participated in student government?!?”). But Bates understands that we like Gomez and Morticia because, underneath their black clothes and eccentricities, they’re decent people. I may not want to spend a long car ride with any of these characters, but I found myself cheering for them nonetheless.

To be sure, King Knight is a slight film; even at a lean 81 minutes, it occasionally feels padded (particularly during Thorn’s walkabout, which takes up much of the second act and is never quite as visually dazzling as it needs to be), and not all of the jokes land. But in its cheerful perversity, I was reminded of such latter-day John Waters favorites as Serial Mom and Cecil B. Demented. As in those films, the somewhat ragged plotting and often declamatory dialogue are features, not bugs, and add to the good-hearted, let’s-put-on-a-show spirit of the proceedings. This is a film full of profanity and scatological humor and deeply, deeply silly humor (I haven’t even touched on Thorn’s visions of Merlin, played by Twin Peaks’ Ray Wise– “You’re my favorite fuckin’ wizard!”). But this tale of oddball cultists and their weird obsessions warmed my heart. In the end, how could it not remind me of BUFF?

* – Tone-Deaf in particular will always have a place in my heart, as it awarded me my first pull-quote as a critic.

Part of our ongoing coverage of the 2021 Fantasia Festival – watch this space for more!