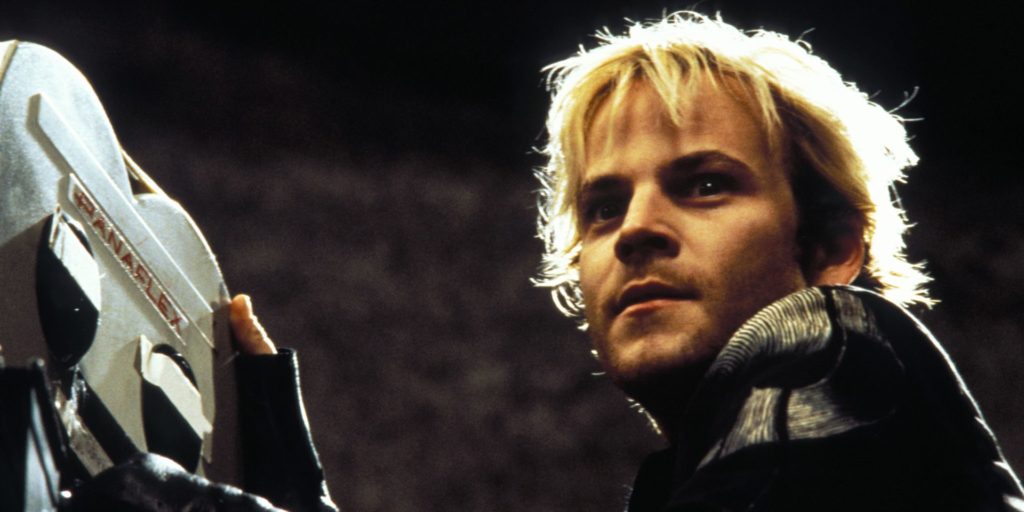 THE STREAMER: Tubi (free with ads)

One of the nice things about temporarily switching the Hassle’s focus to the streaming world is that it allows us to shine a light on films that, for whatever reason, rarely screen around town. Case in point: while the films of John Waters have been a staple of alternative cinemas for pretty much the entire half-century he’s been making them, I don’t believe I’ve ever seen a local repertory screening of his 2000 action-comedy Cecil B. Demented. On the one hand, this is understandable; the film is rarely counted among the director’s best, and it certainly has never commanded the cult adoration of, say, Pink Flamingos or Hairspray. Yet it’s a film I will always hold dear, and a vital reminder that, in spite of everything currently going on, passion for film still fucking matters.

In addition to being a sobriquet bestowed upon Waters himself early in his career, Cecil B. Demented is the nom de guerre of a radical underground filmmaker (Stephen Dorff) waging war on the Hollywood studio system from his secret compound (an abandoned movie theater in downtown Baltimore). His secret weapon: glamorous superstar Honey Whitlock (Melanie Griffith, in a lacerating bit of self-parody), who Demented and his cult of “Sprocket Holes” (a petrie dish of future stars, including Maggie Gyllenhaal, Michael Shannon, and The Wire’s Larry Gilliard, Jr.) kidnap from the red carpet of her schmaltzy new film Some Kind of Happiness. Demented forces Honey, at cattle-prod-point, to star in his new film, Flaming Beauty, a guerilla affair in which Honey and her costars crash such establishment events as a luncheon for Hollywood executives, a screening of the director’s cut of Patch Adams, and the set of Forrest Gump 2: Gump Again (with Kevin Nealon swapping in for Tom Hanks). Naturally, Honey is horrified to be working on a low-budget movie with no craft service table (and, to a lesser extent, to be forced to engage in criminal activities). But as her “scenes” escalate and Stockholm syndrome sets in, she begins to rethink her posh lifestyle, and whether she perhaps wouldn’t be better off as an “outlaw sinema girl.”

In many ways, Cecil B. Demented feels like an attempt to reconcile Waters’ (relatively) polished later work with the extreme, homemade features he made his name on. Waters here trades his early obsession with the Manson Family for kindred ‘70s radicals the Symbionese Liberation Army (naturally, Patty Hearst has a cameo as a concerned parent), but it’s tough not to see the Sprocket Holes as a loving self-parody of his own Dreamland Players. They seem to inhabit an alternate Baltimore in which everyone has very strong opinions on cinema; moviegoers watching a kung fu movie will stand up and start karate-chopping at a moment’s notice, and even the squares are staunchly and vocally pro-Hollywood. He may be working on a greater scale than he once did, but Waters’ scrappy viewpoint is as unmistakable as always.

Is Cecil B. Demented a classic? Probably not; the screenplay is seemingly more than 50% sloganeering (“Hey, hey, MPAA, how many movies did you censor today?”), some of the references are a bit dated (“Your parents actually liked Godzilla!” made a lot more sense when Roland Emmerich’s 1998 boondoggle was fresh in people’s memories), and the plot mostly lurches from one scene to another with not a lot of connective tissue. But it embodies a gloriously snotty film-punk spirit, in which favoring Pasolini over Ron Howard is every bit the radical act that every film student secretly imagines it to be. Demented and his Sprocket Holes may functionally be terrorists, but just about anyone reading these words should see them as an inspiration.

I’m not speaking hypothetically, either. When Cecil B. Demented was released, I was a budding fifteen-year-old video freak who had just started dipping his toes into offbeat cinema. As silly as it may have been, Cecil B. Demented felt to me like an honest-to-god call to arms– my own personal Fight Club, so to speak. The Sprocket Holes’ tattoos, bearing the names of alternative auteurs from Fassbinder to William Castle, served as a road map for my nascent cinematic education, and their slogans and jeers did their part to radicalize me– or at least make me more annoying at the neighborhood video store. Within a year of my first viewing, I’d founded my own band of filmmaking miscreants with my friends, and while I may not have ultimately realized Cecil’s vision of cinematic anarchy, there’s a very good chance I would never have ended up writing about film if it weren’t for his “teachings.” The events of this past week have given us a harsh lesson in the fragility of our artistic ecosystem; what better time to revisit a movie to rile up our snottiest passions? All together now: POWER TO THE PEOPLE WHO PUNISH BAD CINEMA!

Streaming for free (with ads) on Tubi

Streaming is no substitute for taking in a screening at a locally owned cinema, and right now Boston’s most beloved theaters need your help to survive. If you have the means, the Hassle strongly recommends making a donation, purchasing a gift card, or becoming a member at the Brattle Theatre, Coolidge Corner Theatre, and/or the Somerville Theatre,. Keep film alive, y’all.