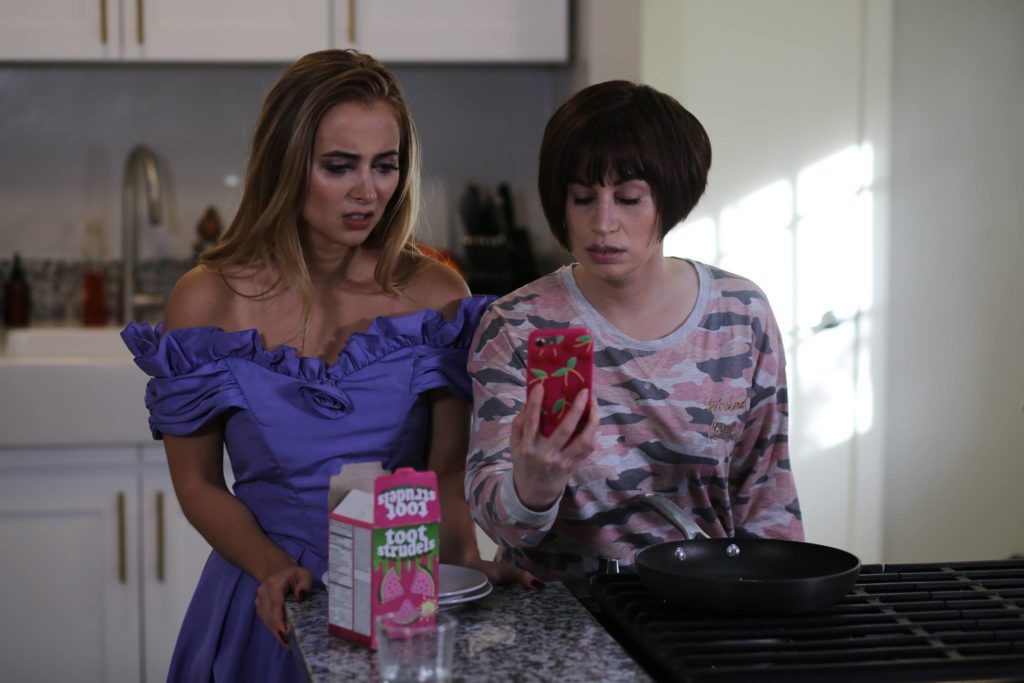 After Saturday’s screening of Mary Jane’s Not a Virgin Anymore, I sat down with the directors of Clickbait, Michael J. Epstein and Sophia Cacciola, which had its premiere on Wednesday. They gave me a look into the film’s production, the themes, and what they want the BUFF audience to take away from the characters’ journey.

BOSTON HASSLE: While I was watching the film, I was looking up stuff about your production company. How did you guys get started making movies?

SOPHIA CACCIOLA: We pretty much started because we were in bands and we wanted to make music videos. After a while, we realized we couldn’t afford to keep hiring people, so we bought a camera and just started doing it.

MICHAEL J. EPSTEIN: The music videos were too successful, so we had to keep making them! It was the right thing to be doing for both bands. Even if the technical components weren’t great, we could make something.

SC: And our music was always very DIY, so we just decided to teach ourselves.

BH: Where did the idea of Clickbait come from?

MJE: We moved to Los Angeles about three years ago, and we were just looking to get involved in projects. We saw an ad for this woman who was putting together a movie and was looking for a cinematographer. I decided to reply and she sent me the script. And in my way of always interfering too much with everything, I asked if she wanted notes. She talked to the writer and I sent over all my notes. Over the course of a year, this project became something we completely took over as our own project. Brandy Aguilar, who plays Emma in the film, was originally set to play Bailey, but once I talked to the writer we basically rewrote the whole role. It was originally a serious teen thriller.

SC: Some of the same plot points remain, but they had a different context.

MJE: Yeah, I don’t wanna get into spoilers.

SC: Did you go to it? There’s not much to it, but I had to build it for the movie.

MJE: The entire crew for the movie was like seven people.

SC: I like having a small crew. With a big crew, there’s always a lot of people with not enough to do. On a small crew, everyone’s just working the whole time. It’s very efficient.

MJE: When we started making films, we decided we should learn every part of it. We’ve gotten at least passable at every aspect of filmmaking.

BH: So, the mask. I felt it was a Michael Myers thing, except it was obviously a white Trump mask. What was the origin of that?

SC: There’s no real antagonist; everyone is involved in some way in internet culture. We wanted the antagonist to be a mystery, so we picked the Trump mask. It was terrifying and fit so well, since he’s the epitome of celebrity culture going wrong. He is the corruption of the internet.

MJE: The film’s not about Trump, but he’s a perfect surrogate for the idea that there’s this force of fame that is causing horrible things to happen. The antagonist is the force, not any particular character. Both as creators and consumers. We always show them reacting to the videos. The movie’s called Clickbait, obviously. Everyone complains about clickbait, but someone’s watching these things. We’re all guilty and complicit in this.

BH: If you were going to sell the movie, what’s a one sentence thing you could say?

MJE: This is something we struggle with because the tone is.. There’s a lot of things going into it. How do we marry all these themes? We write something like “A college student is kidnapped by a fan and her roommate is forced to find her.” And that’s sort of what the movie’s about.

MJE: She starts getting stalked, but that makes her popular, so she’s reluctant to stop it.

BH: Her roommate is like her conscience for the whole movie.

MJE: People have asked us if it’s a Fight Club thing. It’s not, but I guess metaphorically. That’d be a very different movie.

BH: What was something you learned making Clickbait? One thing in particular that really struck you.

SC: We learned we could make a movie in LA with no money. We were told it was impossible, but we had a great team.

MJE: Every time you make a movie, you think you’ve solved every problem. But something happens every time. I always learn where I messed up the writing. You always know what’s wrong with the movie at every stage. You just hope the problems will vanish, but nope. It’s fine. We shot this in ten days.

MJE: That’s our production style: just focus and bang it out. Have something to say. I’m sort of hoping that people can watch it as a funny, weird thing. But if you choose to dig in more, you can think more about the themes.

SC: The internet affects all of our lives. We all put on an online persona that’s a version of ourselves. You’re putting something out there that’s corrupted in some way.

MJE: You’re encouraged to do so. It’s about your responsibility as a consumer and how you affect other people by choosing what to share or like. We all have a function in this online ecosystem.