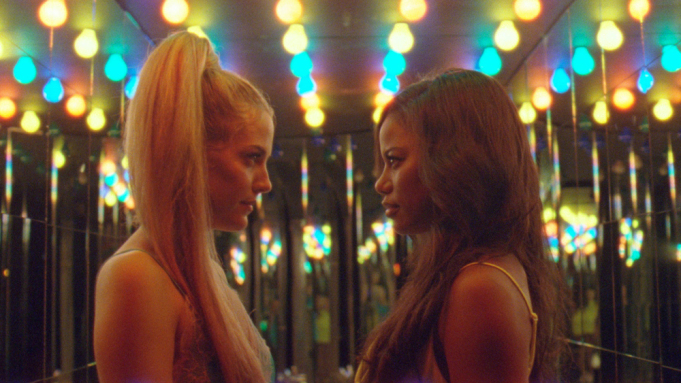 My middle school gym teacher offhandedly taught us that you can determine your hydration status based on the color of your urine. Too clear like water: overhydrated. Too dark like apple juice: dehydrated. The goal: simple and clean lemonade.

Now, Zola in cinematic format could have coasted without foreshadowing. If you knew about this movie before its promotional period, there’s a good chance you were familiar with #TheStory: a 148-tweet thread posted by Detroit dancer A’Ziah “Zola” King chronicling her two-night experience in Tampa. Her hook — “Y’all wanna hear a story about why me & this bitch here fell out?” — was the key to the ignition of a bullet train with an engine of dynamite.

King’s account of the drama between her, the bitch in question (Jessica in the tweets, Stefani on the script sheets), and the other merry fellows was one of the top trending hashtags, as both regular and celebrity folks grappled to every word of this fated #hoetrip. There’s no denying that, even with the admitted embellishments to the truth, Zola King knew how to tell a story. She had a knack for character-confined cliffhangers and comedy gold in the form of four-word asides. Janicza Bravo’s adaptation of her story couldn’t — and shouldn’t — outshine the primary literature’s clout, but my soul felt closer to King’s words when the movie had an overhead of the two characters urinating in the toilets, with Zola’s being a Minute Maid and Stefani’s being a Miller Lite. Warning signs weren’t warranted in this recitation of derangement, but it doesn’t hurt to grease the wheels of the incoming trainwreck we all came to see.

As legend goes, Zola (Taylour Paige) meets Stefani (Riley Keough) at a breastaurant, where they find out that they are both dancers. Without knowing each other for even a sennight, Stefani asks Zola to join her and a couple of others “getting schmoney” in Tampa. Those merry fellows: Stefani’s boyfriend Derrek (Nicholas Braun, who plays the character as Cousin Greg with a chin strap) and “X” (Colman Domingo), who Zola later finds out to be Stefani’s pimp. It’s all fun and games when a road trip montage is set to Migos’ “Hannah Montana,” but tensions soon rise between Zola and the gang when a slow night at the strip club trickles to other lucrative means. 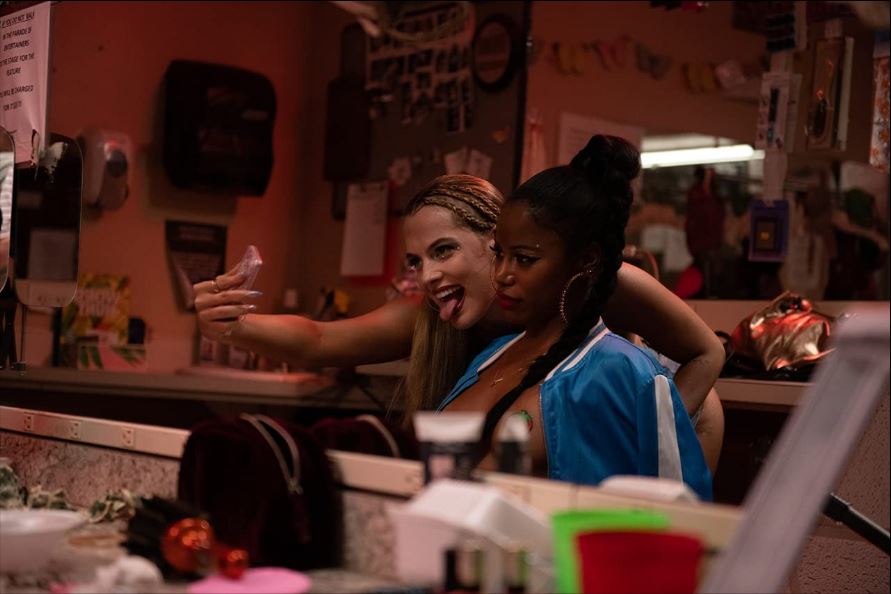 I imagine that most people, myself included, had expected that the film was going to have a hyperpop sense of fashion, set with beaming nightclub colors and pounding basslines. If James Franco had still been attached to direct, this could have been some unforgivable Spring Breakers spin-off where he’d find some way to reprise his Riff Raff-esque character. With Bravo’s vision, the artful balance between stripper sensationalism and wistful hindsight makes Zola a cautionary tale signaling that, underneath all of these antics, the circumstances are pretty fucked up.

Without losing touch with social media’s pristine agency in this tale, the choice in aesthetics flaunts a flair that doesn’t feel trapped in its own timeline. The grainy filter fits well to the popular usage of “vintage” fashion, forgoing the need to believe that life has to be vicarious through high iPhone-photo quality. We hear Twitter notifications throughout the movie, which serve as a lightened disruption in the more serious moments (it might seem like they correspond to the actual next tweet, but it does seem ridiculous to think that we may have heard it over a hundred times). Instagram hearts float to the center of the screen, reminding us that we partook in the process of these shenanigans coming to the big screen. Characters read their text messages aloud in histrionic Internet speak, which amounts to a much better conversation than having to look at characters’ leaden screenface. The film flirts and flexes in modernity, but knows how to stay a step ahead from dating itself.

One of the biggest crimes I committed last year was not praising Paige’s performance enough in Boogie (let alone that typo in her name!) even though she elevated Takahashi’s character far higher than what was asked for. That and her cute stint in Ma Rainey’s Black Bottom had me subscribed to the belief that Paige might be one of the best upcoming actresses to look out for. Zola proves to be that rising platform. Much of the film’s dialogue borrows from King’s own lingo, but when Paige anoints, “Pussy is worth thousands!” it sounds like it’s straight from the heart. I also liked that the film kept a maturity in Zola, where we are assured that an almost-victim of sex trafficking, and a Black woman at that, is the voice of reason.

Keough, who has played all shades of backroads-antagonistic white from American Honey to The Devil All the Time, comparatively battles Paige with an unaware viciousness. Her unflinching abilities to use AAVE and drag sensibility a step lower than rock bottom can certainly set Keough into a specific villain typecast. But in her exploited moments, one might feel a small cherry’s stone of pity — the type of reaction that hopefully refines the Stefanis she’ll continue to play going forward.

The momentum screeches to a halt at the end, where it feels like we needed more time to stare out the window in silence with companions that you almost died with (the grown up in me wants to use The Graduate for resemblance, but it’s more like this). The end leaves much to be desired, but it should be apparent that there won’t be any exchange of friendship bracelets. There are lessons that are learned, but one piece of professional advice: if you have a long and suspenseful story that needs to be told, it’d be in our best interest for King to tweet it and Bravo to illustrate it.