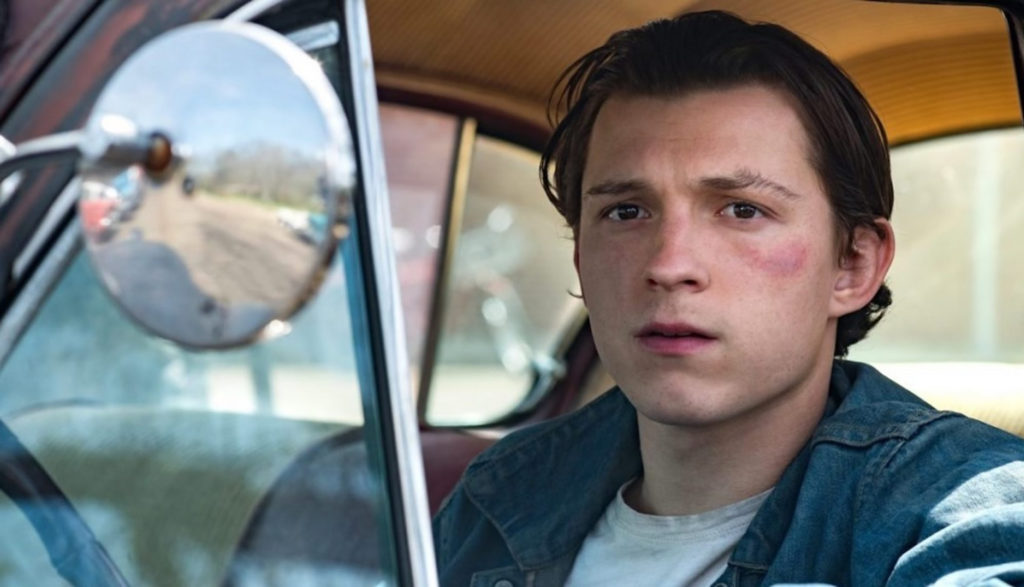 Netflix, in all of its brand-recognition glory and throne-warming to the video rental industry, must have a shit ton of money to expel the amount of original content that they do every month. So much so that even in these ensemble films like Antonio Campos’ The Devil All the Time, the star power alone could elevate a network movie into something that audiences would pay for in theaters. Deviating from the previously successful straight-cut action films that had benefited from shooting down locals in foreign lands (see: Extraction with Chris Hemsworth, Triple Frontier with Ben Affleck and Oscar Isaac), The Devil All the Time spills on the Appalachian soil between West Virginia and Ohio.

The story is a tale of two generations in over two hours while somehow utilizing much of the cast for a few words in its entirety. It may help to know that Tom Holland is the center of this rural townie orbit in his role as Arvin, the son of a WWII veteran and a waitress. His bloodline is traced back to the trauma of his father Willard Russell (Bill Skarsgård), who returns from duty with psychological wounds that manifest into an overzealous devotion to Christianity. He marries Charlotte (Haley Bennett) despite his mother pushing him towards Helen (Mia Wasikowska), a widow and part of God’s bargain should Willard survive the war. Though happily together, the Russells are socially distant from the rest of the town, which make for a sort of untreated psychosis in Willard that causes him to act erratically (or macho-angry, whatever fits the bill best) through the topics of Arvin’s bullies or Charlotte’s cancer diagnosis. Through many (of many) tragedies, we see that Arvin is going to be our hardened seventeen-year-old protagonist, is only soft for the few important people in his life. He, and we, can only hope that righteousness will be done by them.

It becomes a narrative marathon, and a sort of reviewer’s insanity, to attempt to describe the many bad things that the characters indulge in. The title gives us the impression that there is some demonic presence puppeteering behind these motives, and that these characters that are getting away with evil are really on borrowed time. We can sense that Robert Pattinson’s Reverend Preston will be greasier than his quarantine pasta ball, and Sheriff Lee (Sebastian Stan)’s corruption seems, well, realistic to today’s political ‘n’ police ordeals. But in the storyline between Carl (Jason Clarke) and Sandy (Riley Keough), the couple gets their kicks by creating pornography with dead male bodies, an act that I initially didn’t comprehend (“Wait, does she have sex before or after they die? Or during?” I kept wondering during their scenes) until long after the film ended. Somehow this year of Hell overlooked the opportunity to prove that necrophilia can be and is very much someone’s thing.

Look, it’s no surprise that in the grit of religious small towns, there’ll be criminals who have heard the words of the Bible, chuckled to themselves, and do the damn(ed) thing they weren’t supposed to do. And I think Campos neatly creates stunning imagery of the darkness (and, once, cute) that shrouds religious-based acts. But to see so much badness that happens in this movie is like walking in on a Lars von Trier movie screening. Speaking of which, The House that Jack Built is currently streaming on Hulu; perhaps I’ve read so many reasons why I shouldn’t watch it, but I found it to be sorta crude and boring (this is the part where I could defend Nymphomaniac‘s vivacious allegories even though I complained about it a year ago because I guess this is growing up?). Meanwhile, The Devil All the Time is crude and short of an impressive finale. At this point, I’m not sure if I’m asking for an additional hour or scene cuts to emphasize other meaningful interactions. But my opinion submits to author Donald Ray Pollock’s, whose role as voiceover seem to present as approval of Campos’ adaptation.

At the least, The Devil All the Time‘s entourage of talent does not waste beside the grisly details. Everyone is perfectly cast as pretty faces or tortured souls and no one falters under another performance. But the desire to have so many names to do so little emphasizes Netflix’s interesting attempt to distance itself from other TV network-type films. By putting most of its betting money on production value and relevant actors, Netflix’s polish on these kinds of films can overwhelm the body — an effect that could be advantageous for certain intentions. If you got time for a sinner, you can probably make some time for this one.