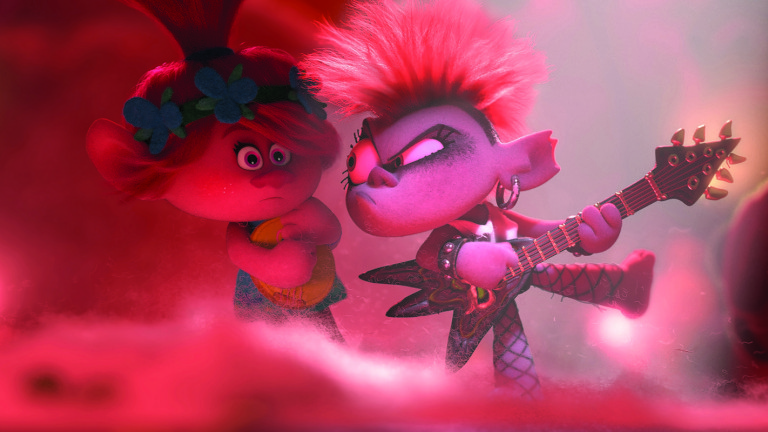 Trolls World Tour has found itself in a strange position. Originally scheduled for theatrical release this weekend, the film pivoted to home rental due to the current COVID-19 pandemic. While most blockbusters have shifted release dates to later this year (and will likely shift again), Universal and Dreamworks have opted to release Trolls on digital platforms for a $20 48-hour rental. Though some fear this move will discourage future theatrical releases, Universal is definitely taking a financial hit. I don’t see this becoming the norm for Disney and other studios – this is for the kids stuck at home. Who knows, though – the film industry is certainly being disrupted at this moment.

Anyway, Trolls World Tour is a sequel to 2016’s Trolls, which came out right before Donald Trump’s election… the timing of these films is weird. Anna Kendrick stars as optimist Poppy, a pink Troll who loves friendship and saved her village from Troll-eating Bergens, who are not in this film. Justin Timberlake co-stars as grumpy Troll Branch, who rediscovers his love for music in the first film and spends this one trying to tell Poppy he’s in love with her. The film’s antagonist is hard rocker Troll Barb (Rachel Bloom), who wants to steal each Troll village’s special musical string to unite the world under rock. It should be noted the string lore is not in the first film, and in many ways this film can easily stand on its own without the 2016 original.

The handcrafted, neon-tinged look of the Trolls world is its best feature – the ground is stitched together like colorful fabrics; everything has googly eyes, including the sun and clouds; the water runs like ribbons. Each Troll society is different and fun – the country Trolls live in a Western town, Classical Trolls in a floating village, etc. I was honestly bummed I couldn’t see it on the big screen for the colors alone. The musical choices are all fairly obvious, but it’s not like children are clamoring for Aerosmith deep cuts. The film is barely 90 minutes, so kids can definitely get a few viewings in before the rental period is up. Parents can wear earplugs if they want.

Trolls World Tour isn’t a great film, but it has fun musical moments and a nice message about respecting people and their differences that is definitely corny, but still appreciated. The $20 price tag for a rental will definitely scare people off, but for a family of four it’s a bargain. Unfortunately, I am an adult with no children, and I cannot recommend following in my footsteps. Trolls World Tour is most interesting metatextually as we enter this era when movie theaters are closed for the foreseeable future. Hopefully one day soon we will be allowed to see mediocre animated films on the big screen once again.

Available for premium at-home rental on Amazon Prime and Vudu