PROMOTION PALS is an ongoing series where two life-long pals, W. Logan Freeman and Andy Houldcroft, experience corporate promotional schemes for new Hollywood releases and review them alongside the movie.

In what could only be described as a drunken stupor – and a continuation of the Promotion Pals series – Film Flam writers, Andy Houldcroft and W. Logan Freeman, dared to venture into Dreamworks’ Trolls filled with stomachs full of McDonalds, hearts full of desire, and a backpack filled with Sugar Cookie vodka.

Our original pitch to our editor for this review was to go eat at Grendel’s Den & Restaurant in Cambridge and then see the movie, perhaps slightly drunk on a beer or two. But after a quick review of what constitutes a “troll” and an investigation into the creatures described in the old English poem, Beowulf, we quickly reconsidered.

For those of you who are unaware, Grendel and Grendel’s Mother are not trolls – nor is anything in Beowulf.

It’s easy to get this confused given that in some retellings of the story Grendel’s Mother is referred to as the Troll-Wife, however, if Robert Zemeckis’ mo-cap classic Beowulf taught us anything, it is that Grendel’s Mother is a dragon woman. All of this data has been arranged in a user-friendly integrated synergy chart for you to browse at your own leisure. 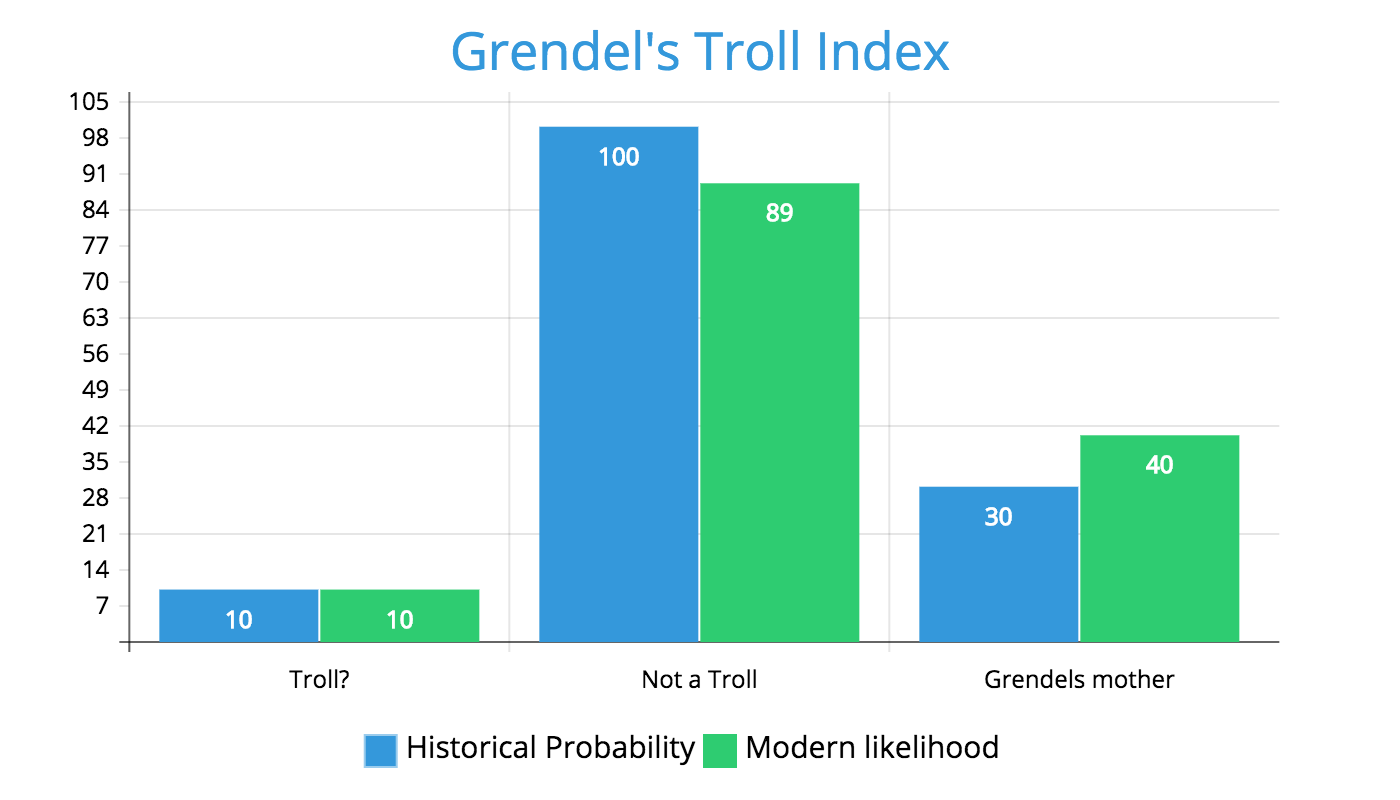 Logan: So since we could not go to Grendel’s Den and Restaurant, due to both the fact that it didn’t make any sense, and was out of our way, we delved into the realm of Google where we searched for various product tie-ins for Dreamworks’ new animated classic, Trolls.

Andy: Going on the food-related theme of our previous piece on Storks, we decided it was probably in our best interest to eat something related to Trolls. (But not the trolls themselves – we’re no “bergens!” That will make sense soon.)

Logan: Our options were slim. Trolls had partnered with TrueMoo to produce branded milk, but dairy makes my stomach upset because humans are not biologically equipped to digest the milk a cow produces. So, we decided on taking fast-food powerhouse, McDonald’s, up on their new and exciting Trolls themed Happy Meals.

Andy: It was a pleasant revisit to something from my childhood and a good way of controlling our diets. What we decided — for some reason — was that eating this was not funny enough and, instead, we had to be really drunk as well. This was perhaps a misstep.

Logan: I agree, this was a poor calculation on our part. I ended up being too drunk before ordering, my bladder threatening to burst open. I ran into the McDonald’s ready to take full use of their porcelain thrones but was greeted with an Out of Order sign. Piss daring to leak through, I bounded onto Tremont Street and had Andy guide me to the nearest empty alleyway, where, like Solid Snake from the Metal Gear Solid series, I slid underneath the sight of a security camera and let my member fly wildly about and urinate onto a step. The pool diverged into two separate streams I desperately tried to avoid as Andrew kept guard. At the end, all was good, and I only had a few stray droplets of urine on my new blue boots I purchased the previous week from Primark, for a job interview, which was ultimately unsuccessful. But I digress. 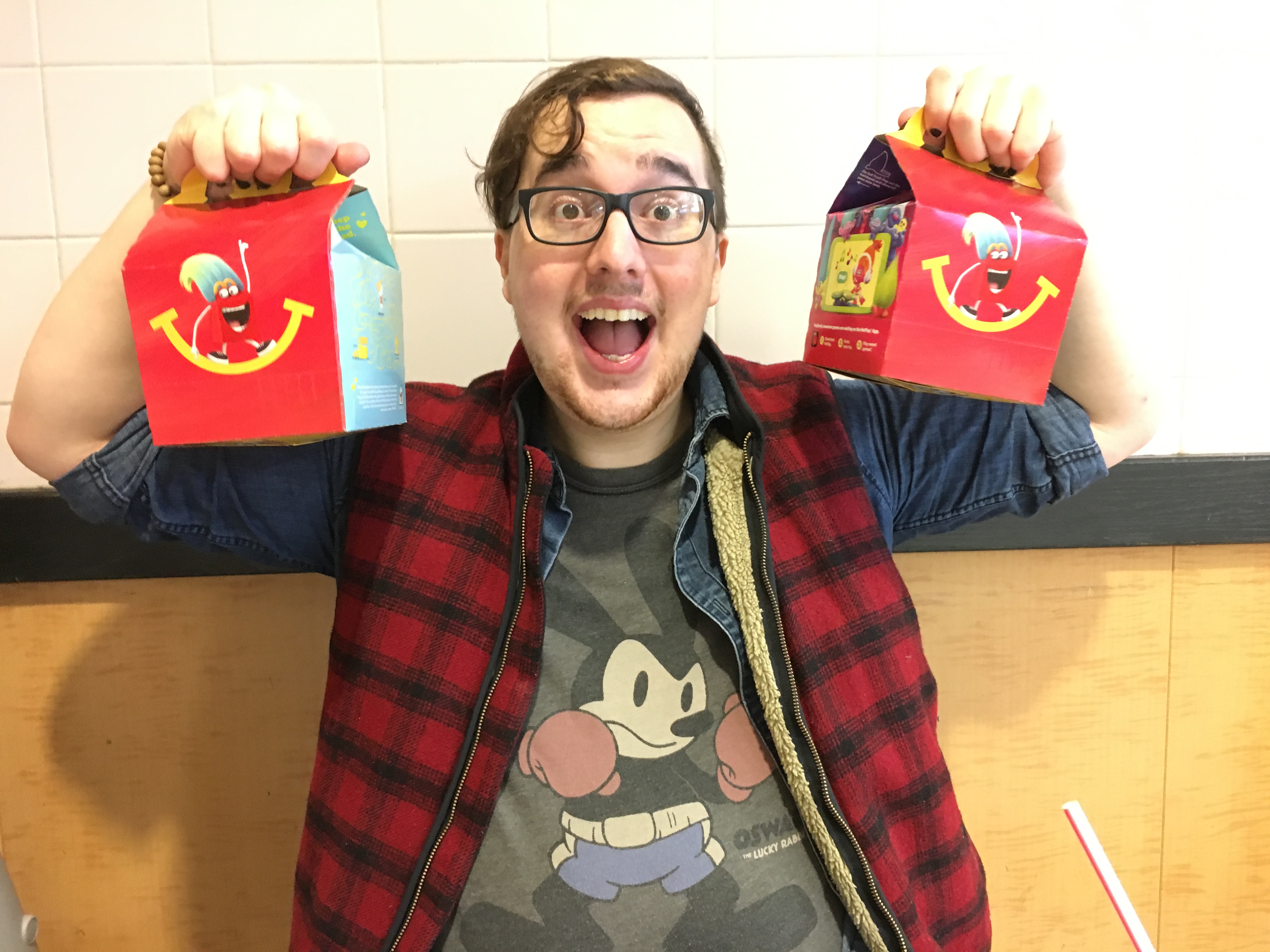 Andy: Yes, dear readers, I’m afraid I have to level with you: I remember mere snapshots of my experience from that fateful evening. I recall enjoying our happy meals, its minuscule cheeseburger, poor excuse for a serving of fries, and the strange yet calming glow of a child’s face as I handed them my toy feeling out-of-place, out-of-mind. I also recall the taste of that $5 shot of Seagram’s whiskey our bartender — we went straight to The Tam after eating — coerced into taking instead of our original “cheap tequila” request.

Everything felt fine — the food was what you’d expect, the alcohol even better. What I did not expect was the visual smorgasbord that awaited us as we shuffled into the theater, taking quick sips of the vodka we’d smuggled in.

Logan: Intent on being able to keep the buzz going throughout the feature, we decided to sit in the back row where no one would see us. However, halfway through the trailer for the upcoming The Boss Baby (review coming soon), a little girl and her father took a seat next to us. This produced a moral dilemma. Do we really pull out a bottle of sugar cookie vodka and drink it in front of this child as she’s trying to enjoy this movie? Our hearts told us not to do this, so we got up and moved to the second row…. By the way, this movie was in 3D, and let me tell you, dear reader, I had not so viscerally experienced cinema since the time Andy and I sat in the same exact spot for Mad Max: Fury Road. (A sold out showing we snuck into by purchasing tickets to Furious 7).

Andy: From its first few notes, Trolls captivated the screen in a wash of color and voice, creating less of a film at points than it did an experience. I admit, I have never taken a designer drug, nor have I ever been involved in the whole rave scene, but I can tell you this comes pretty close to that feeling, I’d assume.

Logan: Look people, I’m going to level with y’all here. See this movie. I’m not sure if it’s the best movie ever, but if you’re watching it in 3D, in the second row, drunk — it is, simply, unforgettable. Save a slow second act.

Andy: Justin Timberlake blew me away.

Andy: I really don’t know what to say. I mean, the film is this trip of music and singing and dancing. It’s almost too happy at points — not that that’s a bad thing. As for JT and crew, they make the Trolls’ world into a convincing and alluring spot of hedonism, joy, and euphoria incarnate. I guess we should talk the story? 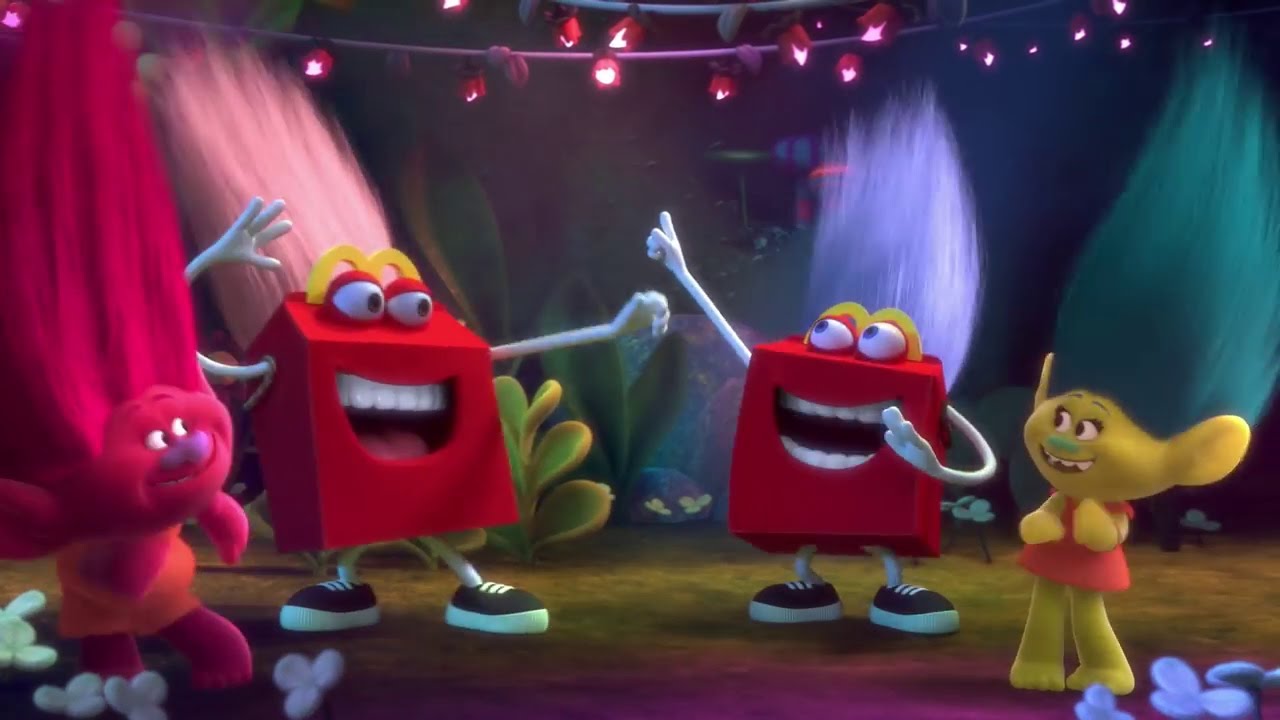 Logan: I sort of want to touch on the story — mostly I want to continue on your point about the hedonistic existence the Trolls inhabit. It was, in a way, almost authoritarian how Troll culture demanded unbridled exuberance from its citizens. As we were saying, the great JT plays Branch, a troll who appears to be naturally more downtrodden than his fellow peers. But after going on a rip-roaring adventure to save the princess (?), and reconciling the fact that his love of singing killed his grandmother, Branch learns to accept his inner happiness and becomes like every other Troll in their society. The message of the movie seemed to be: Be happy or else be a freak.

Andy: Pretty much. You see that embodied by the films’ antagonists, a group of disgusting, questionably designed, monsters named the Bergens. Their whole intent throughout the film is to consume the trolls and to simulate some sense of joy through their consumption. Jesus, I just remembered there’s a Gorillaz song in this movie.

Logan: There were many songs in this movie, some amazing, some mediocre covers, and some so unremarkable I can’t recall them at all. But no matter the quality of the song, the quality of the animation was always top-notch. Dreamworks has truly crafted their most visually arresting film to date — trading in the bland play-doh-ness of the Shrek series, for something more akin to Yoshi’s Wooly World.

Andy: Everything had a tactile-quality to it, an essence that made me feel like I could reach out and run my grubby McDouble-stained fingers over the trolls’ fuzzy beauty were I not too drunk to stand. Furthermore, the visuals were so intricate, so complex at points, that you could not help but drop your jaw in a genuine sense of wonder. 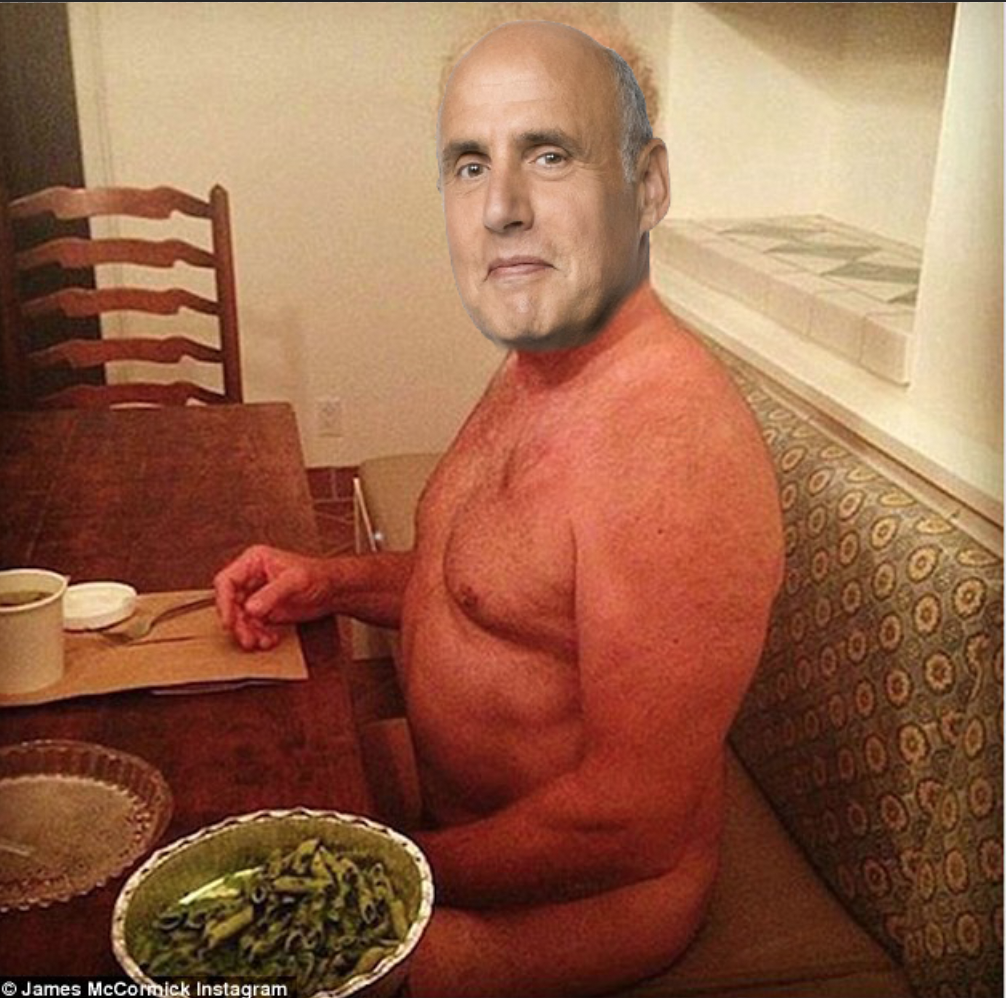 Pictured: Tambor, one of the greats!

Logan: I think we’re at a wall of agreement here, so I’d like to turn tables, and compliment the ever-great Jeffery Tambor for his performance as King Peppy, who I mistakenly assumed during the run time of the movie, was actually, quite humorously, named King Papi.

Andy: Peppy, Poppy, Papi… Branch… it’s all so cyclical. I agree, though, Tambor gave a great performance shouting such memorable lines as “No troll left behind!” over and over with a resounding bravado.

Logan: Perhaps an Oscar win for Tambor, hot off the heels of his second Emmy? Anyways, I don’t have much more to say, because for large parts of the second and third act I dissociated into the whirlwind of sound and colors and can’t recall large portions of the plotting.

Andy: I agree. I think the last thing I’d say is just the one biggest WTF moment of this movie was when we learn Branch’s motivation for acting as a depressoid for the majority of the movie is because “singing killed grandma,” which… is strange, unreasonable, and undercuts the character. Other than that, JT made us weep and laugh in a swirl of beautiful and true colors. 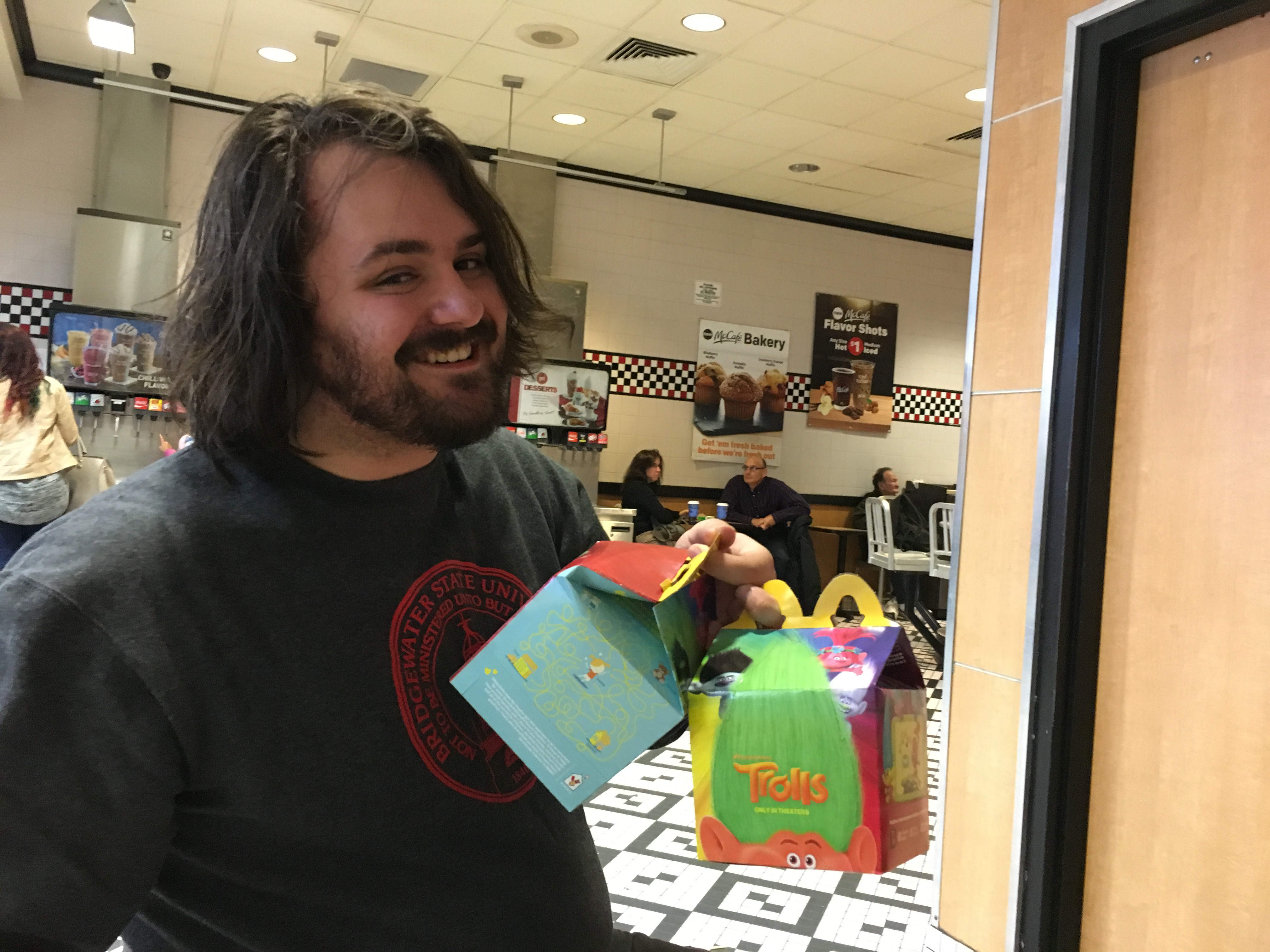 Logan: For me, the biggest WTF moment, was not from the movie, but the Uber ride we took afterward, with a man intent on regaling us with ghost stories. I recall most vividly the story he told of his brother, a cab driver in Nepal, who ran over a woman, but when he turned around, the woman was gone. “A ghost,” the driver laughed, turning to me with a sly smile. He had a bell on his dash and I asked him what it was for. He giggled underneath his breath. “It is for peace,” he said, turning to me once more. “Peace away from ghosts.”

Andy: Peace out, everyone.

Logan: Well, I had a great time, but the movie cost 17.99, and the happy meal cost about 4.00. Add that together with the 5.00 dollar shot, the initial cost of the Sugar Cookie Vodka (retailed at 11.99), and a ten dollar Uber ride back… Well, I’m not sure the budgetary costs of this experience align with overall enjoyment. However, I’m going to say, it was pretty good!

Andy: Trolls is the bombastic, colorful, and heartfelt love-letter you need as we near the close of our presidential election. It is a great escape from the colorless world we call home. (Just kidding.)