As part of a widespread marketing campaign, burger chain Red Robin teamed up with RatPac Dune Entertainment and ran a limited time offer we couldn’t refuse.

If a customer were to purchase a limited edition Red Robin gift card valued at 25 dollars, one would receive a single free ticket to Storks, the latest from RatPac Dune Entertainment, a movie that takes a modern spin on a classic American fable (or is it myth?).

Without spoiling too much, Film Flam writers Andy Houldcroft and W. Logan Freeman* immediately made the pitch to experience this promotional offer first-hand and present a written conversation on the experience. And without further ado…

Andy: I don’t want to sound rude but the promotion isn’t exactly straightforward. There’s a sinister truth behind Red Robin’s “BURGERS and a Movie” offer.

Logan: We awoke on the morning of Friday, the 30th of September, with aspirations of saving money with this excellent deal — but the devil is in the details. Not only was the “free” ticket only valued at 10 dollars (AMC tickets are generally around $14), but the offer code was only available six hours after purchase. Here we were, in a mall parking lot outside Red Robin, with no way of succeeding in our plan, unless we bought a gift card, ate a meal, and then waited around for six hours. So instead we decided to just get a meal anyway, and then pay full price to see Storks. The day cost us an accumulated total of around 60 dollars. A far cry from the projected 25.

Andy: That’s a tough pull on the Hassle writer budget. And, to make things even weirder and less financially savvy, we didn’t have it in us to make full use of Red Robin’s signature bottomless fry offer as our meal was pretty filling.

Logan: That’s right, we only ate our initial serving of bottomless fries. For the main course, we both ordered Buzz’s Big Mac and Cheese Burgers, cooked medium, because the only other option was medium-well.

Andy: Oh, you ordered yours medium too? Well, that being said, I didn’t have an issue with the place or its food. I was more upset about their ethics.

Logan: Red Robin’s corporate elites are charlatans and cheats, and I am their lowly fool. Yet I digress… Let’s talk about the flick.

Andy: You know, I think Storks boils down to a story that’s in some ways what you’d think but in a lot of ways weirder than you’d think. This was not the movie I was expecting it to be and that’s probably a good thing.

Logan: I went into this film with very low expectations. I assumed it would be only slightly better than Norm of the North, with perhaps an even lazier story due to the boring, heteronormative… myth? fable?… it was dealing with. But, by the third act, I was on the edge of my seat, jaw hung, as I turned to Andrew in disbelief at the neo-futurist action sequence screening before us.

Andy: For a story based on the premise that we live in a world where sex is an uncomfortable and perhaps imaginary topic there’s a lot of substance for some reason. Especially the third act. But I was sold even earlier when the subject was told through some very bizarre, surrealist moments that I think were lost on the children we saw the film with (as well as the adults).

Logan: I would say the most surreal bit is the pack of wolves who have the abilities of the Wonder Twins. Barking out, “WOLF BRIDGE,” or “WOLF MINI VAN,” and then melding into a grotesque, homunculi approximation, the logic of this only stopping when they call upon the power of flight (“WOLF PLANE”) and immediately fall off a cliff face.

Andy: Some of the wolf bits were confusing to look at and, in a way, reminiscent of confusing sequences from the Transformers movies but with metal replaced with fur and flesh.

Logan: This, of course, calling to mind the artwork of Hieronymous Bosch. 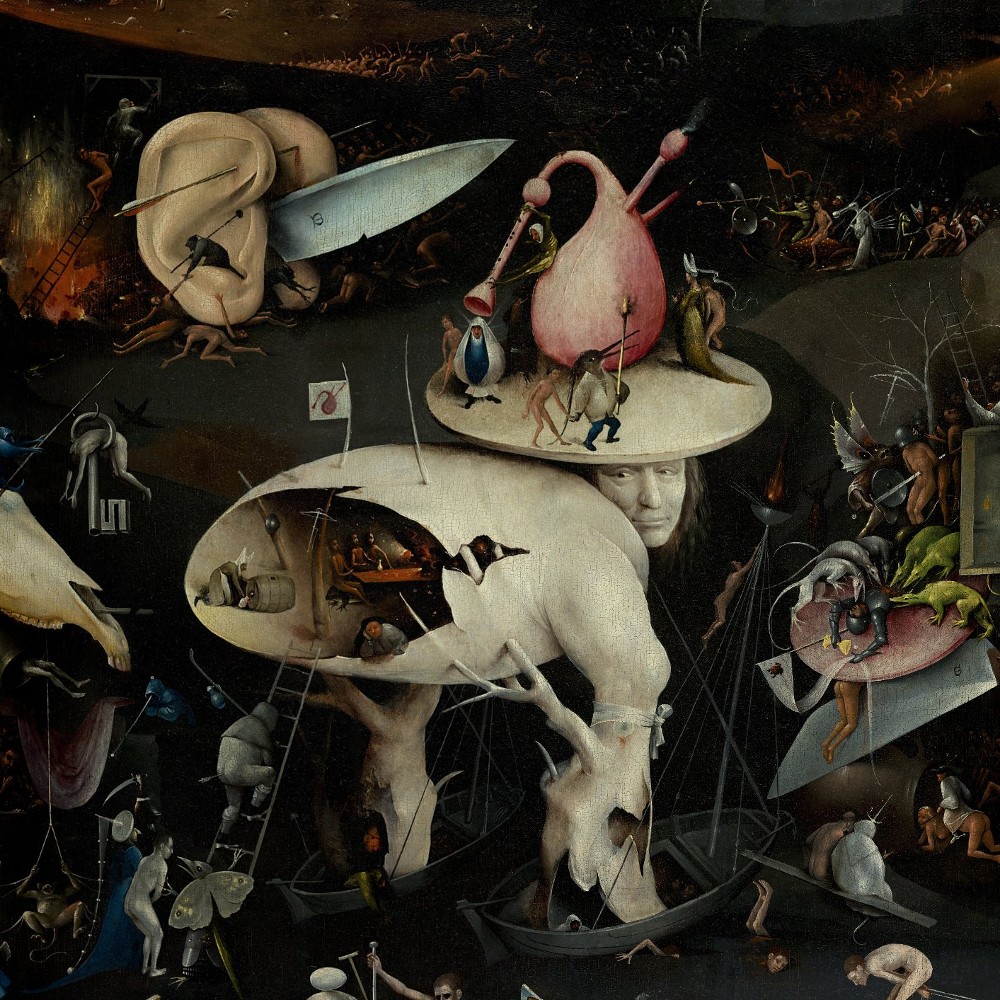 Andy: Sure. (beat.)  One of the things that sold the comedy for me — aside from those crazy breaks in reality — was Andy Samberg’s bizarre and, at points, unstable characterization of Junior, one of the two main leads if you exclude the baby as being a lead. This isn’t necessarily a boring protagonist but someone… I’m not really sure I’m supposed to root for. What were your thoughts on that?

Logan: The protagonists I found to be as you said, bizarre. We had a Stork, who was vying for a leadership role at his generic corporate job (in this universe, Storks went out of the baby business, and now work for an Amazon-like knock off service) and he was at times cruel and aggressive, and yet at others sweet and emotional. However, even Junior’s moments of emotional honesty had to be pried from him by the co-lead: Tulip, a human woman who has lived her entire life amongst the storks due to the unfortunate fact of her being a baby who never got delivered.

The movie psychologically pathologized this situation, and makes Tulip one of the most unstable characters I’ve ever seen in a children’s film who wasn’t a complete second banana (This probably isn’t true; the Minions, of Despicable Me fame, are pretty unstable, as is Donkey from the Shrek Saga). Tulip is incompetent, weird, and so desperate for attention, that the blatant need is uncomfortable to watch. The pairing of these two was, simply, arresting.

Andy: I have a hard time believing that a human raised by storks can even function outside of Stork-related interactions. But I’ll put a pin in that.

The film is pseudo-progressive in ways that infuriate me. This comes across especially with Tulip and how the film treats her. I think the intention was to create a character who seemed charming and capable but, as you said, this doesn’t come across. She’s an inventor — again, where did she learn any science-related info amongst storks? — but a pretty shoddy one at that, developing things that don’t work and creating countless disasters early in the film. And, as for charm, well… There’s not much to love with someone whose humor is very based on manic forms of behavior (i.e. a scene where she talks to herself through multiple, aggravating personalities, each an exaggeration of some sort).

Her quest for attention is also padded by the film’s decision to force a “maternal instinct” into her character. One sequence comes to mind where we see Tulip realize, Oh, I need to protect this baby, before zooming into her brain and having all this history of human mothers protecting their children play through her head. How is she even aware of human history? Do the storks keep records? The mythos is confusing.

Logan: Well, I guess the implication is that because she is a woman those histories of maternal protection are woven into her life-blood. This is deeply sexist. And the whole movie’s plot is thrust by this stupid plot. Essentially, dear reader, what happens in the movie is this: Tulip accidentally re-starts the Bioshock-esque baby-making machine, and makes a child. For some slightly contrived reason, she and Junior must deliver this baby to the people who wished it into being. (In this universe, people send letters to the storks, and this massive Wellsian device interprets the letter and creates a human life — the Frankenstein implications are not played to full effect). 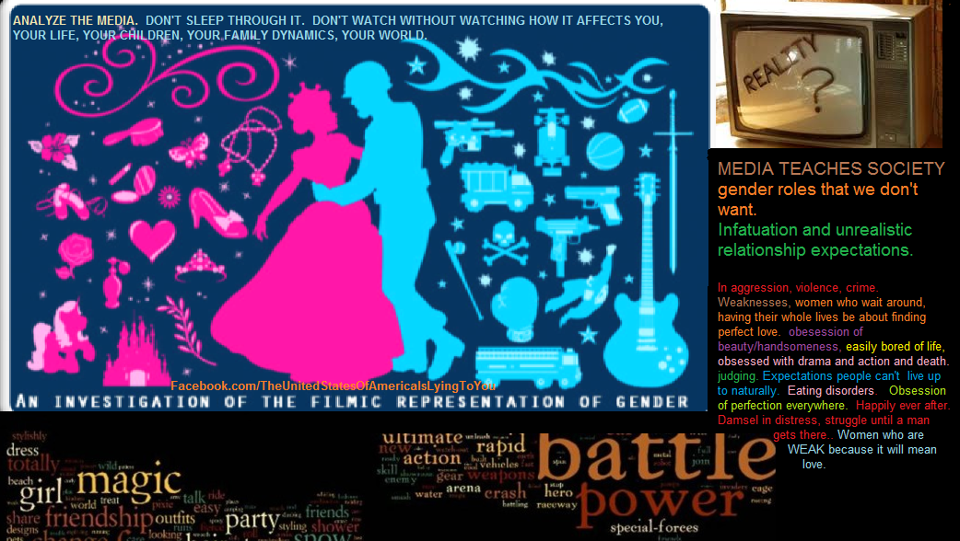 A Googled search for heteronormativity yields most interesting roads.

Anyways, it’s really stupid and sexist — they also imply that like “fathers” don’t really give a shit, but also do? I don’t know. They tried to explore this through a fucking bird, so it’s all pretty dumb. The movie had a chance to break from the heteronormativity and tell a story more interesting, but at the end of its run time (SAVE ONE BEAUTIFUL MOMENT), it reinforces a lot of shitty ideas of how a family should be structured and how they should operate. Andy?

Andy: Absolutely. This was conceptually a cool idea. Like you said, this was an opportunity to combat the heteronormative myth (fable? definitely not fable) of how modern families function. There are glimpses of how this could be more interesting. For instance, one of the final sequences of the film shows babies being delivered to all sorts of families and living situations, including one glimpse at a single parent. Any of these would make for a better focus than the family we’re given — the family the aforementioned baby is meant to be delivered to. What they are is a boring white couple with a crappy kid who wants a brother. Great.

But what if that wasn’t the family receiving the baby? And what if there was more confusion about what to call the baby instead of immediately calling them “her” denoted by the color of the baby’s hair (pink). There’s a lot to be said about how this could have been better and more challenging in a way that balances kid’s and adult’s expectations. But it’s not there. What is there is boring, confusing, and, at times, absurd.

Logan: This all being said, Storks is still a highly enjoyable movie. Though I think structurally the first act was a little quick, and the second one a little padded by the inclusion of the Wolves Who Could Transform, the third act was the perfect combination of comedy, surrealism, and action. And beyond that, some of the jokes were so funny I cried. And despite some dud characters, I became more attached than I thought possible the two mains by the end of the run time.

Andy: I agree. It’s not entirely what I expected. The absurdist comedy excited me, the utter dedication to bits killed me, and, in general, I was fascinated by the unexplored world of the storks’ life and culture and weird science. Almost enough to explore that concept deeper, though probably not. 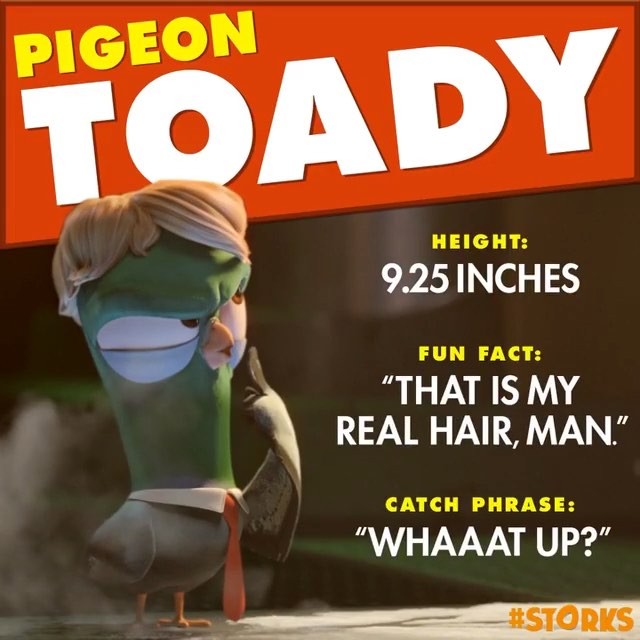 I will say, out of everything this film missed or slipped up on, the worst was this fucking pigeon character. I won’t go too deep into this because I want to create some interest in seeing the movie but you’ll know exactly what I’m talking about if you look into this.

Logan: Ugh. God, fuck that bird. Honestly, most of our complaints wouldn’t be noticed by a light-watch, but that fucking bird almost completely ruins the movie whenever he’s on screen. He sounds like Kyle Mooney slowed down, and made me feel like I was hungover off cheap tequila. My final verdict is that this movie is worth checking out, but if you have to pee or poo during it leave when this fucking asinine little bird starts singing because the bit lasts way too long and will scratch your ear drums and make you dumber.

Andy: Wrapping up, I highly recommend the Red Robin and Storks pairing. It’s not a match made in heaven but… I think it feels right. Good luck finding one in the area, though. I’ll just end that with a big winky face. 😉

Logan: Yeah, don’t go out of your way to experience the combo, unless you have the know-all to actually take use of the deal, but it’s probably over by now. Guess I’ll just end this with a big shrug emoticon. ¯\_(ツ)_/¯

Well that’s all folks, see you next time there’s a promotional event for a children’s film involving a chain restaurant. Where that exists, we will be there. Your faithful watcher, the critic-duo you don’t deserve, but need.

*(Full disclosure: this is us)