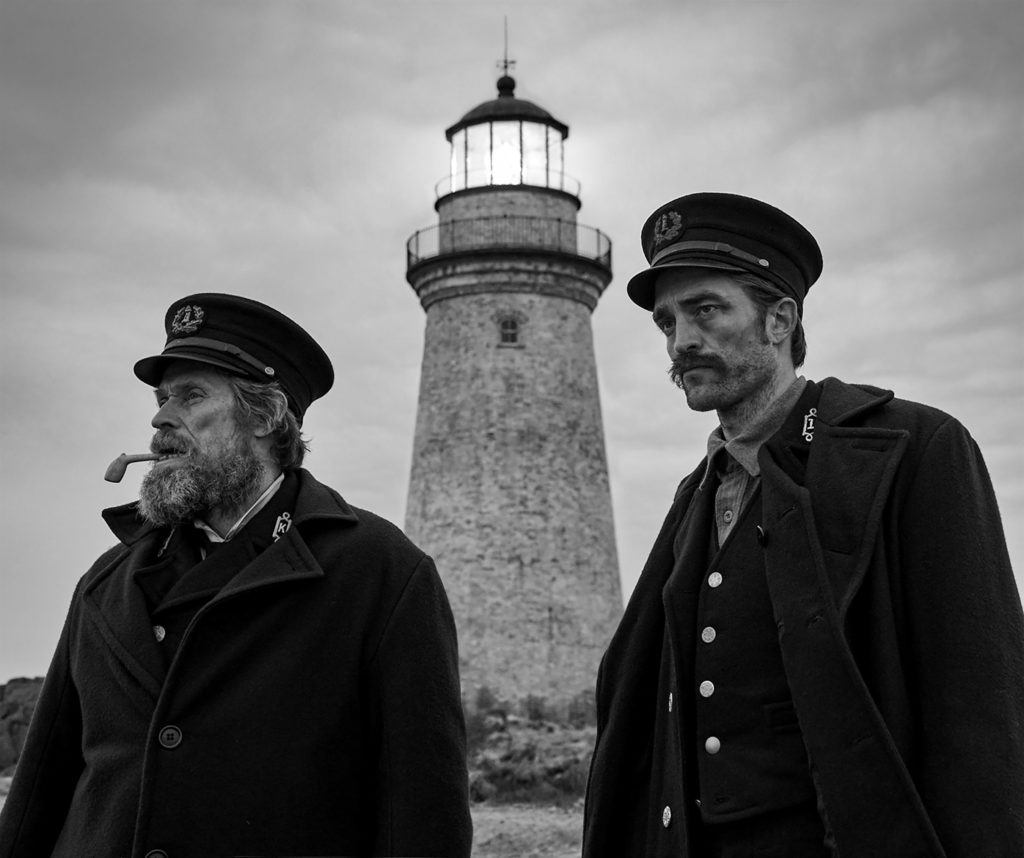 I’ve always been a sucker for nautical business. Actually, I should qualify that: I have never boated before in my life, and I’m pretty positive that I would lose myself at sea within minutes of casting away if I ever tried. But I love a good nautical aesthetic, of hunkering down in the closed quarters of a ship’s cabin or a tiny shack on the harbor. Hell, even a touristy seafood restaurant will do it for me with enough exposed beams and imitation carved figureheads. Maybe it’s my New England upbringing, maybe it’s the old-country sea captains of my family tree, or maybe it’s just fond memories of The Nature World of Captain Bob, but either way, few things read as cozier to me than battening down the hatches near a raging sea.

“Cozy” is probably not the first word one might use to describe The Lighthouse, director Robert Eggers’ follow-up to his 2015 modern horror classic The Witch. It is a harrowingly claustrophobic film which forces the viewer to share close quarters with two unpleasant, demonstrably foul-smelling men as they’re pushed to the limits of sanity and human endurance. Yet my prevailing thought while watching was just how much I enjoyed settling into this world, and how I’d happily ensconce myself in it for hours. When I wasn’t cringing or cackling at two masterful actors tearing into their most unhinged roles in ages, that is.

There are a handful of extras in the opening scenes, and a few more pop up in assorted flashbacks and fantasies, but for the most part The Lighthouse is a two-man show. Willem Dafoe plays the aptly named Thomas Wick, the veteran keeper of the lighthouse on a craggy, isolated isle somewhere off the coast of New England around the turn of the century. He’s joined by Ephraim Winslow (Robert Pattinson), a sunken-eyed timberman embarking upon a new career for reasons murky. Perhaps understandably, friction develops between the two men almost immediately: Thomas is every bit the stereotypically foul-mouthed salty sea dog, and Ephraim is determined to maintain as much privacy as possible under the circumstances. Said circumstances become more trying when their little island gets walloped by a storm, delaying the ship bound to relieve them and forcing them to spend even more time staring at each other’s homely faces. As the days wear on and conditions worsen, sanity begins slipping away, and each man starts to suspect the other may not be who he seems. 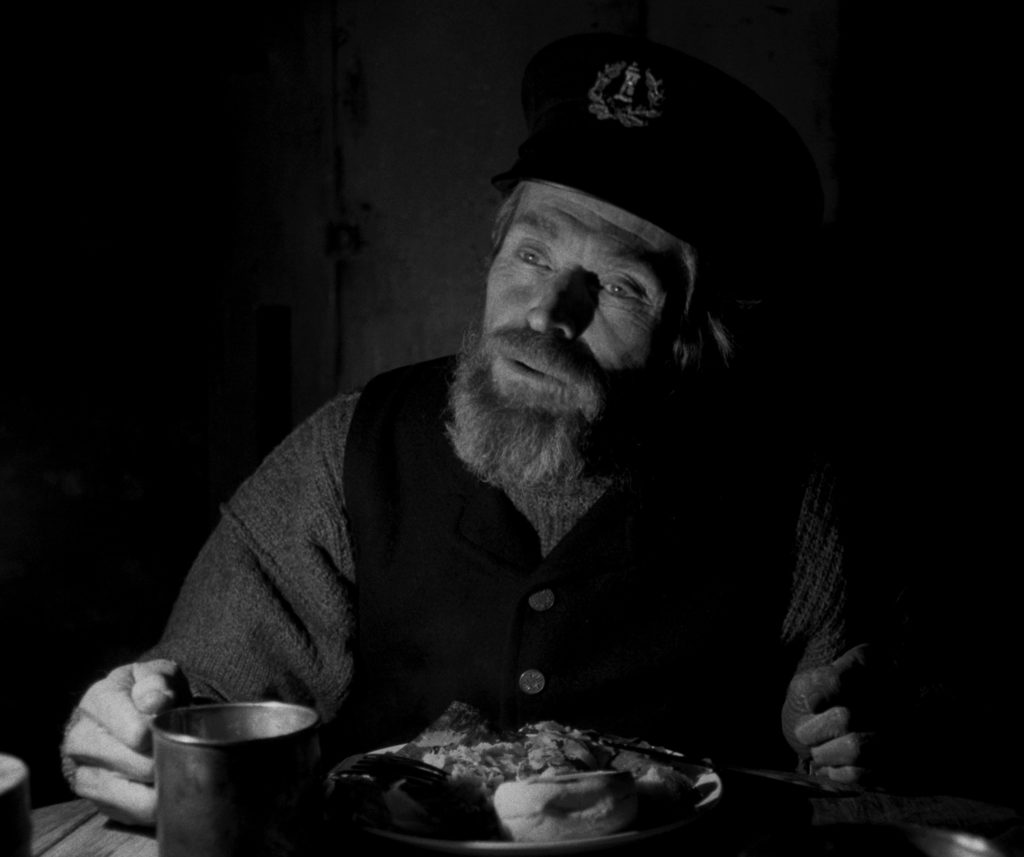 Perhaps even more than The Witch, which was shot exclusively with natural light on sets built with period-appropriate tools, The Lighthouse feels like a film out of time. Shot on high-contrast 35mm in a nearly perfectly square aspect ratio, The Lighthouse feels like a lost artifact from the early talkie era, or perhaps an alternate universe where daguerreotypes were fashioned into primitive movies. The first time we see our two leads, they’re staring grimly into the camera, awkwardly shifting; nominally, they’re watching their ship depart the island, but it looks just as much like they’re posing for a long-exposure photograph. Even as the plot kicks into gear, the ensuing phantasmagoria owes as much to the golden age of German expressionism as anything that’s happened in movies in the century since.

That said, I don’t want to give the impression that The Lighthouse is stately or in any sense restrained. This movie is bonkers from beginning to end, in the best possible way. For starters, I was unprepared for just how genuinely funny it is. There is an unapologetic fart joke several minutes before the first line of dialogue, and sight gags abound involving just about every bodily fluid you can think of. Likewise, the dialog (which, like The Witch, is largely drawn from period sources) is outrageously bawdy and gleefully, colorfully profane (“You smell as though a sack of old onions fucked a farmyard shithouse!” Ephraim screams at one point). These aren’t fleeting moments of comic relief, either, but rather an essential element of the mounting dread. Both the tension and the maniacal comedy build steadily over the entire running time, like a Fawlty Towers episode written by H.P. Lovecraft. 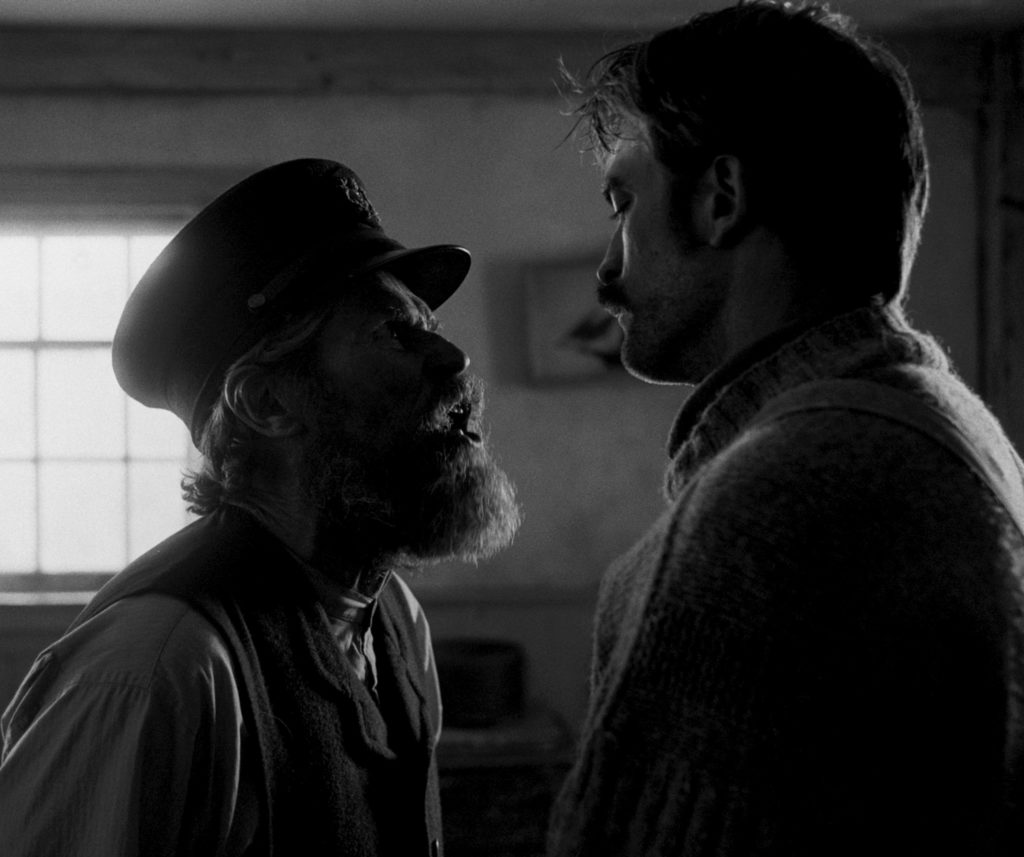 Of course, as masterful as Eggers’ direction is, it would be for naught if his two leads weren’t perfectly cast. As Thomas, Dafoe devours his role with more gusto than any since, well, the last time he dabbled in expressionism. Thomas’ every line is top-tier “Avast ye scurvy sea dogs!” madness (“You talk like a parody!” Ephraim exclaims in a moment of near-fourth-wall-breaking), and Dafoe leans into the curve, perfectly embodying the cliche. Pattinson has perhaps the trickier role, serving as both audience surrogate and taciturn cypher. I’ve praised Pattinson’s bold acting choices in this space before, and this is perhaps his most fearless yet, a full-body performance that regularly explodes from silent intensity to hilarious, bellowed monologues. It’s as if Pattinson takes Dafoe’s madness as a challenge to be met, and, astoundingly, it succeeds.

I’ll understand if not everyone shares my delight in The Lighthouse. This is a dark fucking film, each cramped frame packed with brutality, vulgarity, and all-around unpleasantness. Yet unlike Haneke or Von Trier– or even Joker— The Lighthouse never feels like a chore to watch, at least to me. On the contrary, by the time the film had ended, my cheeks hurt from smiling at the sheer insanity of it all. Films this up-front in their weirdness are rare, and rarer still to see done this artfully– think Eraserhead or the films of Guy Maddin and you’ll get a sense of Eggers’ headspace. Many critical hands have been wrung lately about the ramifications of a film like Joker being shown in arthouses, but just as remarkable is the fact that The Lighthouse will be shown in multiplexes. This is a special film, and one that should ideally be seen in a room full of like-minded weirdos. And if you spot a seagull leaving the theater, maybe leave it be.