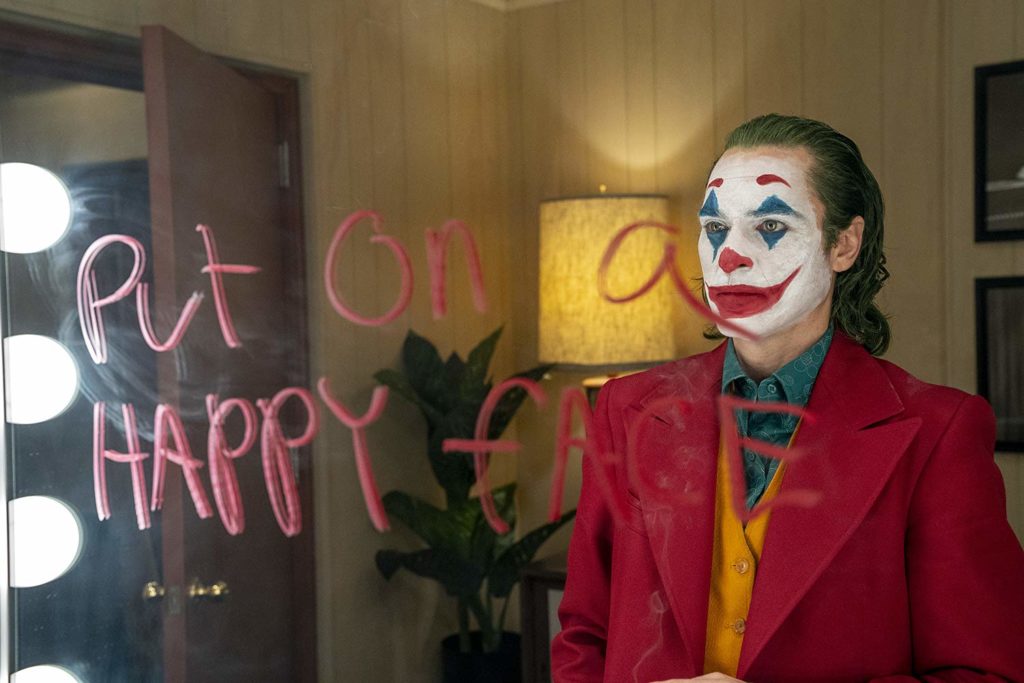 It’s okay if you don’t want to read this review. I understand.

Ever since word got out about Todd Phillips’ dark, Scorsese-influenced take on Batman’s arch-enemy, the internet– particularly the hoary realm that is Film Twitter– has been inflamed. On the one hand, there have been those who wonder if this is really the best time for a film about a murderous-yet-seductive vigilante, convinced that a standalone Joker film may be seen as a call to arms by the incels and other unsavory internet types who have latched onto the character. On the other side, there are the hoards of DC fans, who have somehow spent the past few years metastasizing into a QAnon-style death-cult, convinced of a vast conspiracy between the studios and the critical “elites” to sabotage and withhold their preferred multi-million-dollar superhero flicks. Over the past several months, these two poles have developed into something of a hot-take perpetual motion machine, with both sides constantly outdoing each other in a histrionic arms race. It is perhaps worth noting that, until the past week or so, only the few hundred people who caught Joker at Venice or TIFF had actually seen the film. This was irrelevant; it was 2019.

ANYWAY, at long last, Joker has left the realm of the hypothetical and been released into the real world. Now that I’ve seen it, part of me feels compelled to take one side or the other, to hold it up as a game-changing masterpiece or condemn it as an indefensible piece of trash. But now that I’m sitting here typing this, I’m faced with the least popular opinion of all: Joker is… okay!

In this telling, the proto-Joker is one Arthur Fleck (Joaquin Phoenix), an itinerant rent-a-clown of unspecified mental disability. Arthur lives with his mother (the always welcome Frances Conroy) in a squalid apartment in a 1980s ersatz Hell’s Kitchen (What’s the Gotham City equivalent of pre-Giuliani? Pre-Dent?). Arthur has dreams of being a stand-up comedian, but he’s afflicted with a condition that causes him to burst into hysterical laughter at inopportune moments. A bootleg VHS tape of his “act” does make its way to late night host Murray Franklin (Robert De Niro), who shows interest in booking Arthur as a sort of Tiny Tim-like found-object novelty figure*. But Franklin doesn’t realize his new punchline is a walking powderkeg: bullied, off his meds, and packing heat, thanks to a well-meaning coworker. Inevitably, blood is shed, and the once meek punching bag starts to look a little less… serious. 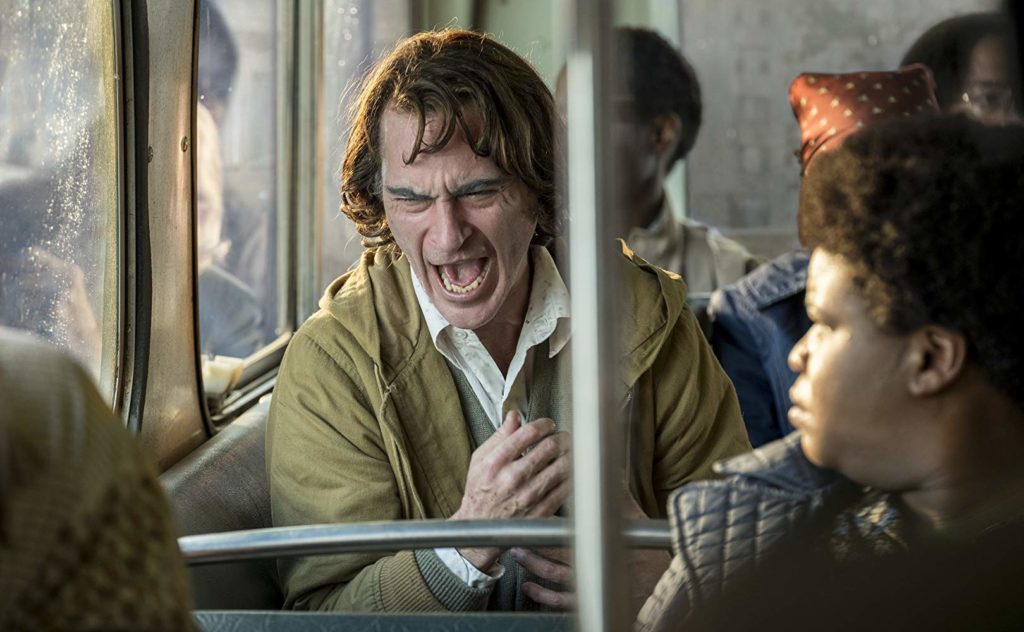 As comic book figures go, the Joker is uniquely malleable; unlike most major superheroes and villains, he has no fixed canonical origin story or secret identity in the comics, making him the ideal subject for this sort of revisionist solo vehicle. He’s also somehow developed a reputation as a sort of Hamlet-like “test” for dark, experimental actors. To be sure, the Joker has been memorably played by some of the screen’s greatest actors, and also once by Jared Leto. But the idea of the Joker as a challenging, “cursed” role can be traced entirely to Heath Ledger’s feral performance in, and tragic demise shortly before, 2008’s The Dark Knight (as great as Jack Nicholson and Cesar Romero were in the role, they all but turned to the camera and said “Can you believe they’re paying me for this shit?”).

It is perhaps this aura of mystery that lured Phoenix, an actor who has become renowned for his methodly performances and radical physical transformations, to play a comic book clown who hates Batman. As expected, Phoenix throws himself into the role, contorting himself in an emaciated frame scarcely recognizable from the mountain of flesh that appeared last year in You Were Never Really Here. The movie itself follows suit; while it draws elements from such sources as Alan Moore’s The Killing Joke and Frank Miller’s The Dark Knight Returns (including one panel which I can honestly say I never expected to see adapted to the big screen), it looks exactly nothing like a typical superhero movie, to the point that the occasional references to the Wayne family feel jarringly out of place. From the start, Joker promised not to be just another comic book movie, and in that pursuit, it succeeds.

But it’s also not nearly as clever or deep as it clearly thinks it is. For starters, its view of mental illness occasionally drifts into Simple Jack territory (and, at worst, borders on demonization), and Arthur’s transformation from semi-verbal sadsack to charismatic psychopath is a little too complete to be entirely believable. What’s more, it has a discomfiting tendency to treat Arthur’s laments as the height of profundity, and one third-act twist is so plainly telegraphed that I was actually surprised that it was treated as a twist at all. The essence of the Joker, in all his incarnations, is gleeful nihilism, which is diluted somewhat when he’s shown earnestly writing in his diary.

I’m trying to stick to the film itself, but I feel like I do need to address the elephant in the room that is the controversy. Many have characterized Joker as a rallying cry for incels, but I honestly don’t think that’s backed up by the text; there is a girl who Arthur creepily pines for (the perennially underused Zazie Beetz– can someone please start offering this woman some leading roles?), but this relationship is not painted as an inciting incident for Arthur’s violence, and she mostly serves as an audience surrogate to the madness. More troubling is a subplot in which the Joker becomes a sort of folk hero for a mass anarchist movement. As in Fight Club, the point here is likely not that the audience should join them, but in a world where a racist Twitter account can be elected president, one can be forgiven for worrying that some might take it at face value. 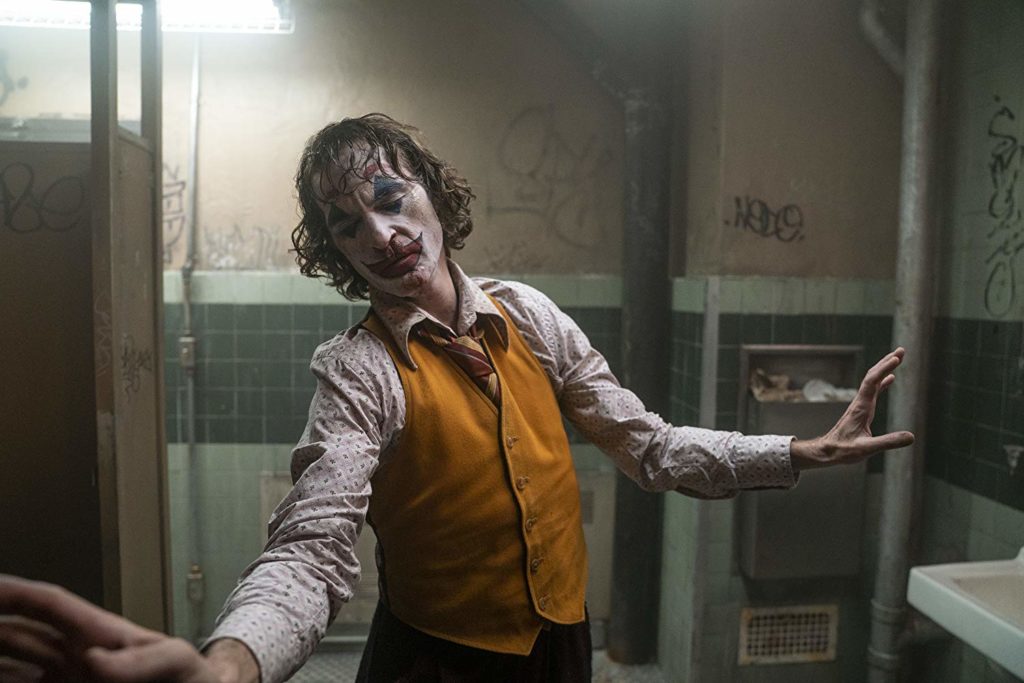 And yet, while I can’t say I was entirely won over by Joker’s thrall in itself, I also can’t deny its achievements. Taken simply as a nasty little slow-burn thriller, it’s undeniably effective, even if it ultimately lands closer to William Lustig than Coppola or Scorsese. At its best, it leans into the dark humor inherent in its subject, becoming something of a cross between the Three Stooges and Death Wish. Again, its greatest asset here is Phoenix, who allows himself to dance across whatever whim enters his mind. At one point, he inexplicably delivers a single line in a scene of dialogue via an invisible sock puppet. I’m not sure if that’s great acting, but it was one of those weird little choices that will stick with me for a good long while.

If it sounds like I’m all over the place, it’s because the film is too. Ironically, for a film that has inspired so many full-throated condemnations and so much rapturous praise, I find myself squarely in the middle. The pressure to churn out hot takes has a nasty tendency to steamroll over the fact that, sometimes, everyone is right. It’s an inventive and artfully made thriller with undeniably problematic elements. It’s not Battle of Algiers for incels, nor is it the second coming of Taxi Driver (we had one of those last year, and most Joker fans probably missed it). It’s the sort of movie they don’t make anymore, and it’s the only sort of movie they do make anymore. To borrow some imagery from another homicidal comic book antihero, Joker is something of a Rorschach test. The only difference is, in 2019, you don’t even need to look at it.

* – Incidentally, Tiny Tim also once played a homicidal clown, in the notorious low-budget horror film Blood Harvest. Ordinarily I’d write this off as a coincidence too tangential for even me to shoehorn into a review, but check out the dude’s make-up.