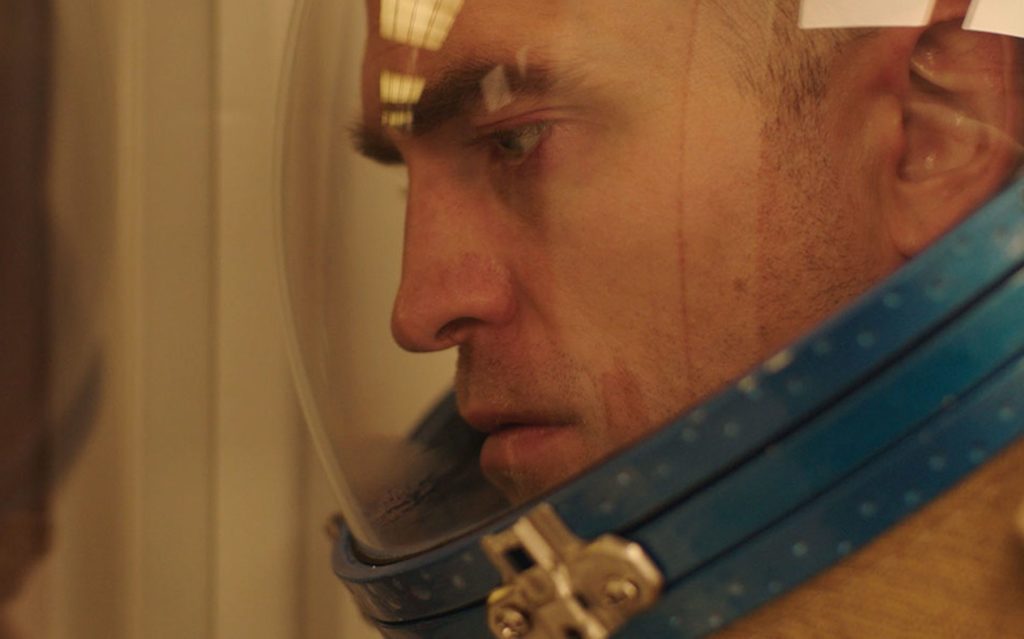 Who would have guessed Robert Pattinson had it in him? A mere decade after emerging as the wan, glittery face of the beyond-parody Twilight franchise, Pattinson has managed to successfully transform himself into one of indiedom’s most consistently surprising and interesting actors. He’s not the first actor to walk this particular path– Leonardo DiCaprio being one obvious example– but Pattinson’s career trajectory beats Leo’s in both speed and extremity, encompassing such uncompromising films as Good Time, The Lost City of Z, and a pair of reliably disquieting features from David Cronenberg. This is made all the more remarkable by the fact that his erstwhile counterpart, Kristen Stewart, has made equally bold and adventurous choices in her own post-vampiric career. It’s like if Beach Blanket Bingo had starred Harvey Keitel and Shelley Duvall instead of Frankie and Annette.

Pattinson’s newest film is perhaps his furthest-out yet, in more ways than one. The English language debut of revered French filmmaker Claire Denis, High Life casts Pattinson as a lone astronaut adrift in the far reaches of the solar system. From logline alone, this sounds like typical fare for a Hollywood actor grasping for acclaim– Damon in The Martian, Bullock in Gravity. This is not that film. It’s a much more interesting one.

Pattinson plays Monte, a lonely, disheveled astronaut (a role originally written for Philip Seymour Hoffman!). As the film opens, Monte drifts in space, providing some unspecified maintenance to his spaceship (a run-down, vaguely Soviet vessel which resembles an enormous cube of brutalist architecture). As he does so, he communicates with the ship’s only other inhabitant: his infant daughter. No one seems to know where he is; his only contact with earth comes in the form of seemingly random video snippets sporadically intercepted by the onboard computer. Over the course of several scenes, we see Pattinson play with his young crewmate, tend to the ship’s surprisingly lush garden, record his thoughts into the captain’s log to keep the life support running, and unceremoniously dump the preserved corpses of his fellow astronauts into deep space.

Eventually, we learn through flashback that Monte and his late comrades were death row inmates, selected by lottery as human guinea pigs to observe the effects and characteristics of black holes. Their primary caretaker is Dr. Dibs (Denis alum Juliette Binoche), tasked with alternately regulating the convicts’ behavior and trying to get them to reproduce, thus extending the longevity of the mission. As we know from our glimpses of the “present,” we know that Dibs was successful in some regards, and disastrously off the mark in others. 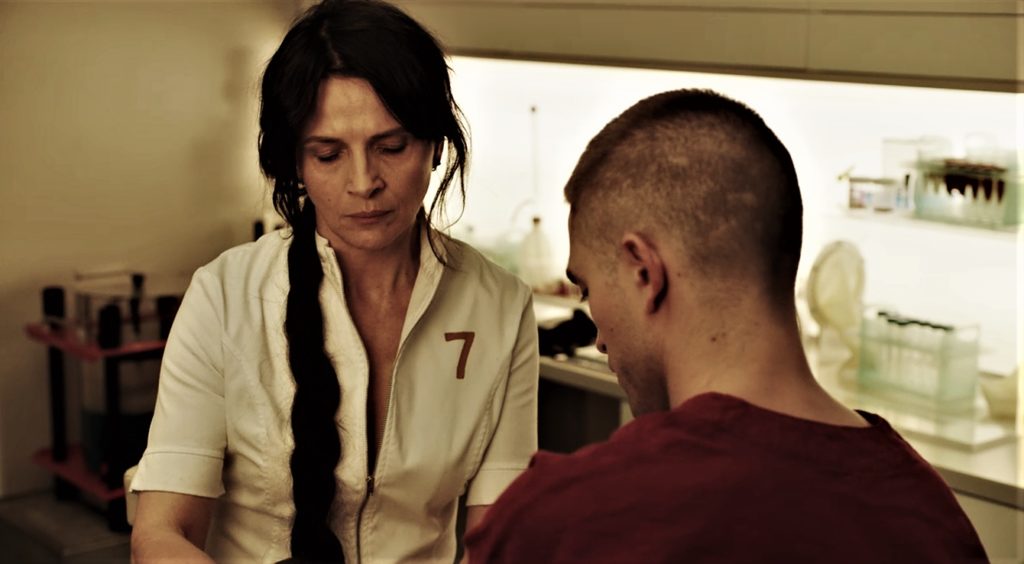 On first blush, High Life could be misinterpreted as a “sell-out” move for Denis: an English-language sci-fi film is, on its face, a dramatic departure for the director of Beau Travail. But, as in her intense vampire drama Trouble Every Day, Denis is more interested in the story than the genre, and it quickly becomes apparent that Denis has not abandoned her trademark lyrical elipticism. Excluding baby talk, the first act of the film is almost entirely devoid of dialogue, and it’s a full forty-five minutes before we receive any exposition– or, at least, hard exposition. I make that distinction because, when the flashbacks begin, they’re almost subliminal: a single shot of an astronaut who is no longer present, or a brief glimpse of what we later learn is Monte’s childhood. By the time we get a more or less full view of what’s going on, we already have an implicit understanding of Monte as a character.

This approach to character carries over into the flashback portion of the film as well. Like much of Denis’ work, High Life functions largely as a character study, but it relies more on attitude and physical expression than dialogue. Most memorable is Binoche. With her long mane of stringy, black hair and her icy gaze, Binoche endows Dibs with spooky, ethereal energy (“I know I look like a witch,” she confides to Monte). Yet for all the amorality of Dibs’ experiments on her patients, Denis refuses to paint her has a full-on villain, instead allowing her intelligence and wistfulness to occasionally position her as something close to a protagonist. In one of the film’s most memorable and arresting sequences, Dibs finishes with her rounds, discreetly ducks into a private chamber filled with a startling array of futuristic sex toys, and, well, makes use of them, in a scene that starts out sensual, then gradually becomes disturbing and animalistic, before dissolving into something hallucinatory and almost abstract. In any other film, this perverse show-stopper would be used to illustrate Dibs’ madness and depravity; here, however, the punchline comes as Dibs exits and casually passes a fellow crew member as he enters to take his turn. In space, the Fuck Box (as it is eloquently dubbed on the soundtrack by Tindersticks’ Stuart Staples) is simply a fact of life.

Of course, as telegraphed in the prologue, neither a state-of-the-art masturbatorium nor the sedatives Dibs continuously pumps into the water supply can fully curb the impulses of a ship full of convicts. Even here, however, Denis plays it cool. Outside of one shocking act of sexual violence, much of what would play in a conventional film as the denouement is here presented matter-of-factly. This is in no way a sci-fi weepie; emotionally (as well as sexually and anatomically) it veers far closer to Pattinson’s liberator from teen-idol purgatory, David Cronenberg.

But this is not to say that High Life will leave you cold. Its hypnotic rhythms and powerful, oft-wordless performances will suck you in, and the special effects shots (this is a sci-fi movie, after all) are legitimately gorgeous. This is brought home when the narrative returns to Monte and his daughter. Without giving too much away about the film’s conclusion, it resolves in a surprisingly poignant place. At its core, High Life is a film about what it means to be human in a place literal light years from anything resembling humanity. In its final moments, as throughout, High Life is simultaneously hopeful and foreboding, distant and deeply moving. Not bad for a movie starring a sparkly vampire.